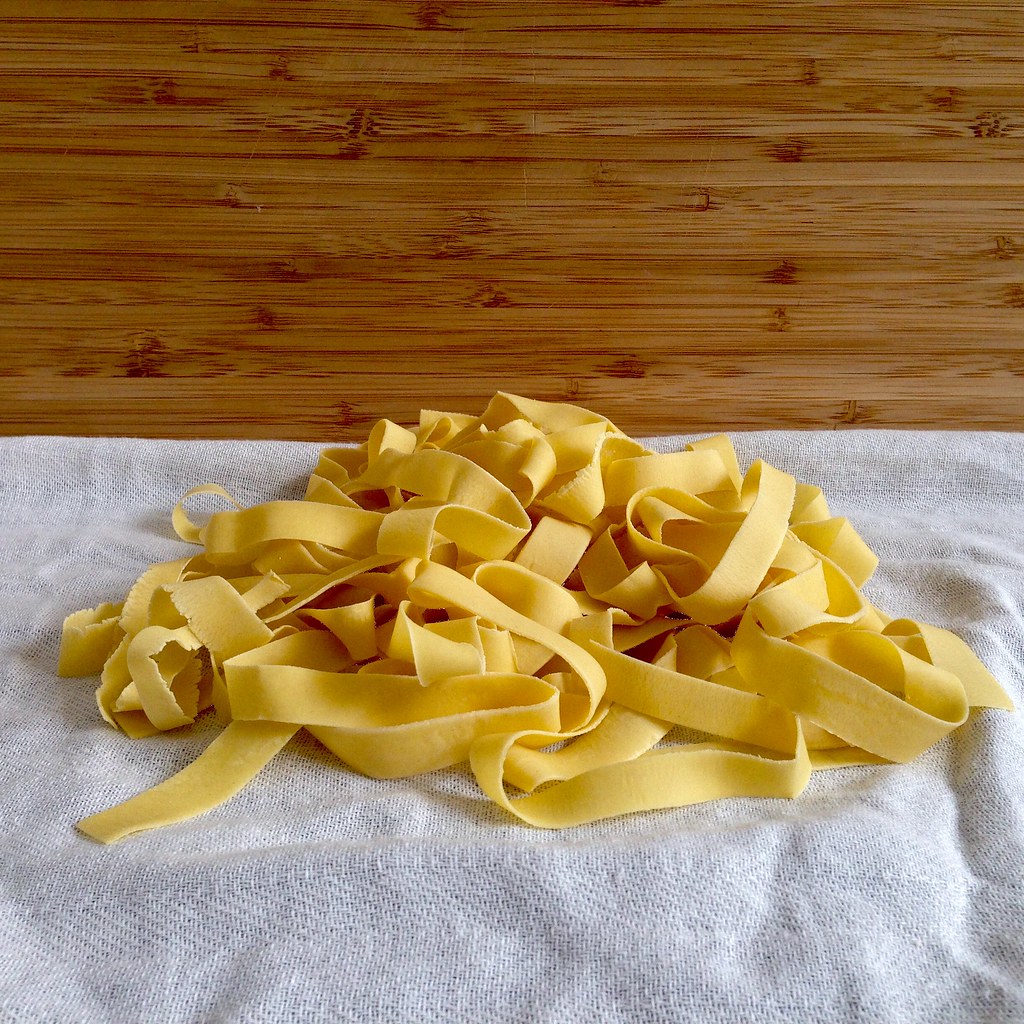 I had three egg yolks left over from making the matcha financiers, so it was perfect timing that I came across this recipe which needed 3 egg yolks (plus 1 whole egg) for making homemade pasta.  I’ve posted about making pasta
before, but even then I commented on how it didn’t look like the
homemade pasta I had eaten in Italy.  I had hopes that using more egg
yolks would make a difference, giving me something closer in looks and
taste. 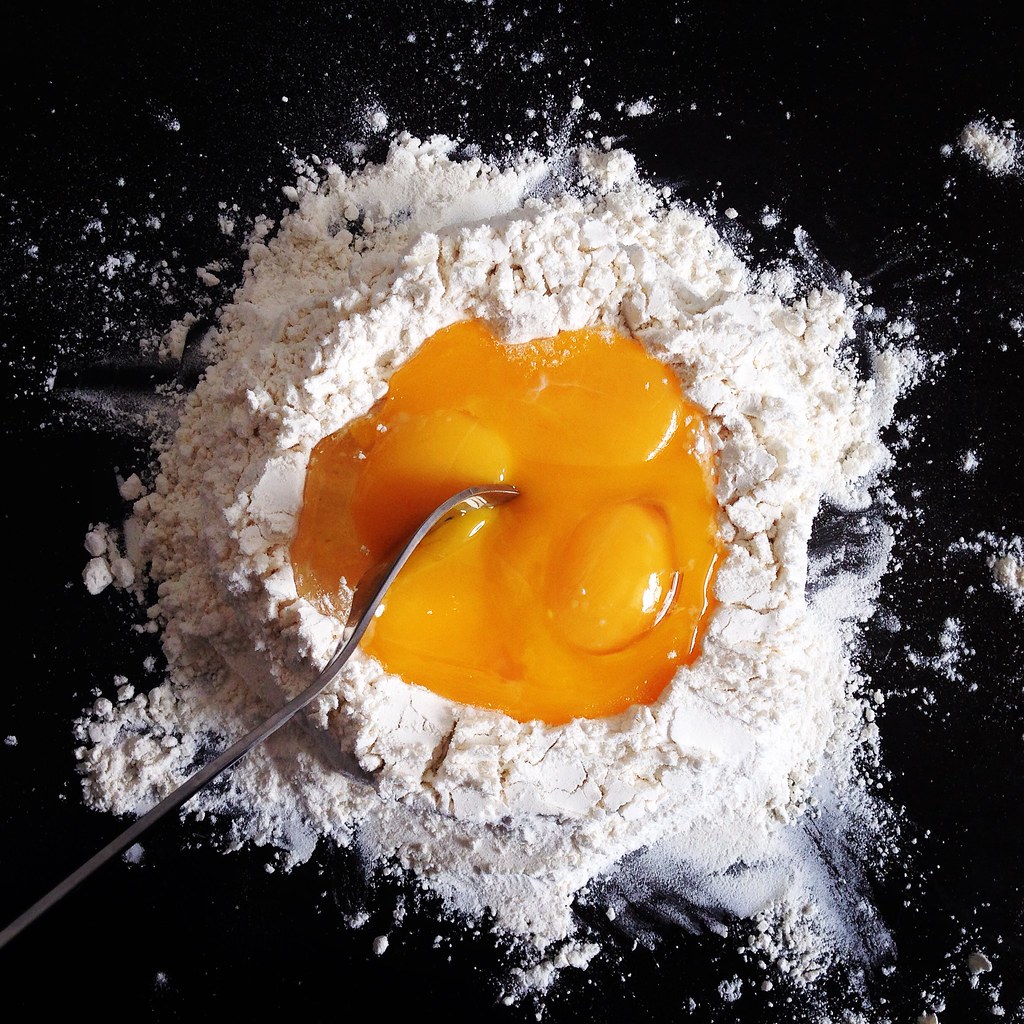 I’m going to share two tips I use when making pasta:  one I
came up with on my own, and one I learned from Lady and Pups.  First,
instead of making the dough straight on your counter- or tabletop, make
it in a rimmed baking sheet.  That way if the eggs accidentally spill
over your flour well (like mine did), it won’t run all over the place. 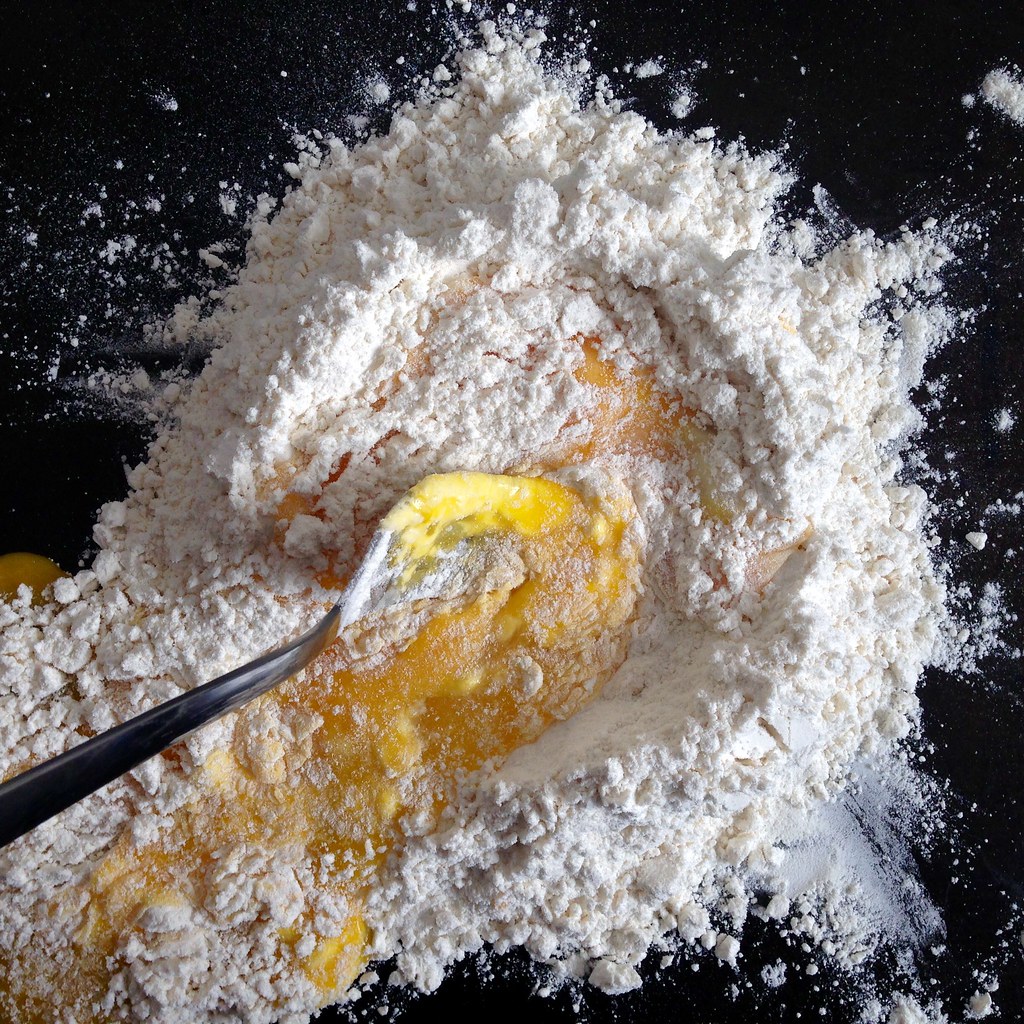 Second, I love this genius tip from Lady and Pups:  seal the ends of
your dough together once you’re ready to roll your pasta thinner in a
pasta machine so that you don’t have to refeed the dough in every time
you change the setting.  It makes the dough so much easier to work with,
especially once the dough gets super thin and long! 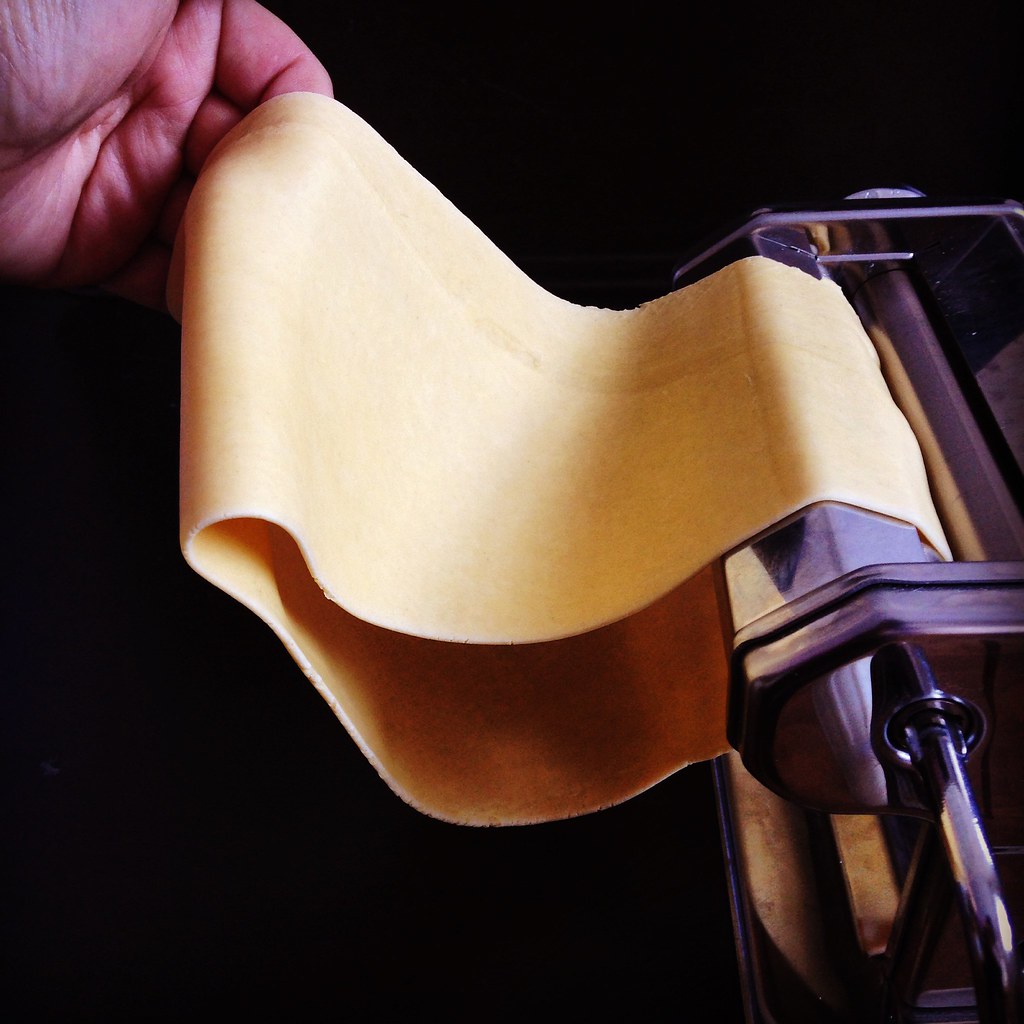 This dough is pretty dry, so you might want to wet your hands while
kneading it just until everything comes together.  Then you can take the
easy way out and throw it into your stand mixer (with the dough hook attachment) to continue kneading,
if you have one.  If not, keep kneading until it’s nice and glossy; it
will take a while, but you’ll get there eventually. 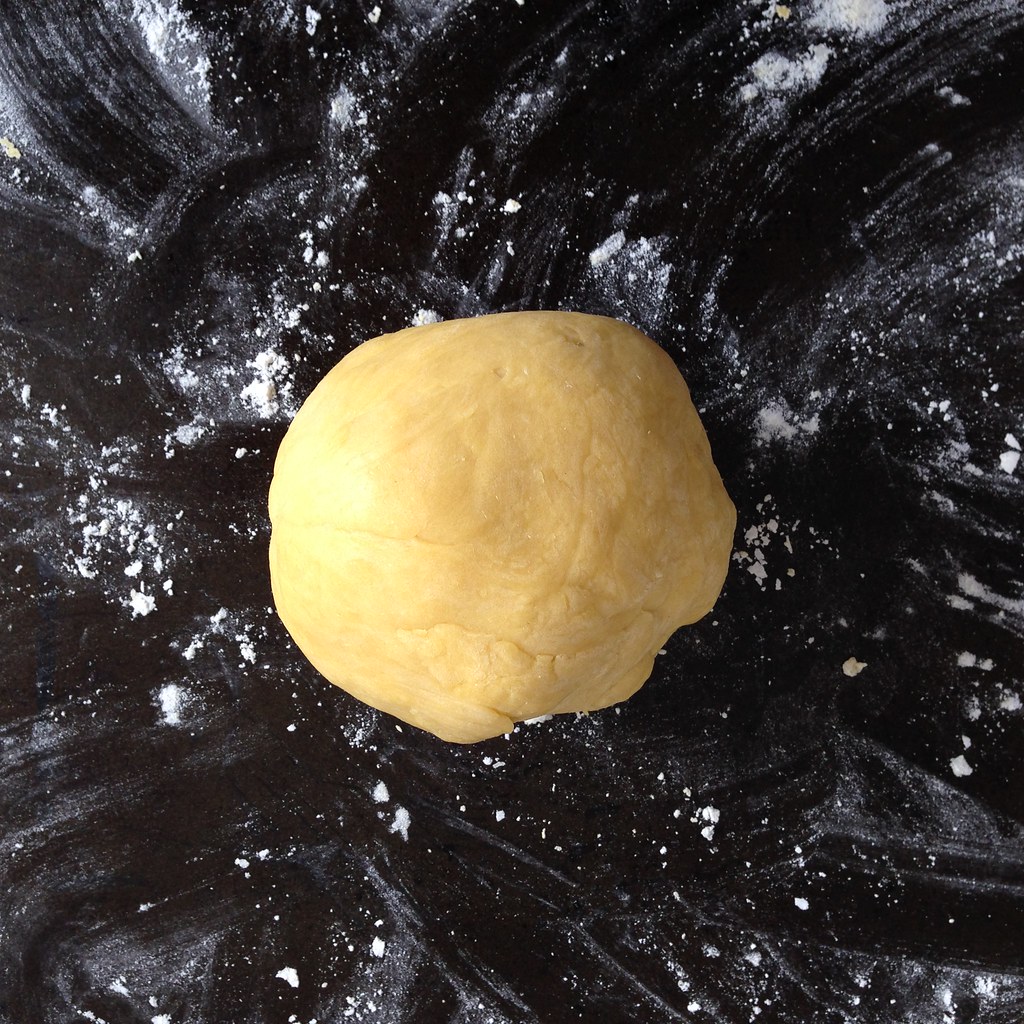 After you’ve rolled out the dough so that it’s so thin it’s almost transparent, you can cut it into any width you want:  super wide for pappardelle, wide for fettuccine, thin for tagliatelle, or super thin for bavettine.  This pasta is so good you’ll just want to toss it with a really simple sauce so you can really appreciate the noodles.  Here I’ve made it aglio e olio, with just some garlic and olive oil, and a pinch of salt and red pepper flakes.  Buon appetito! 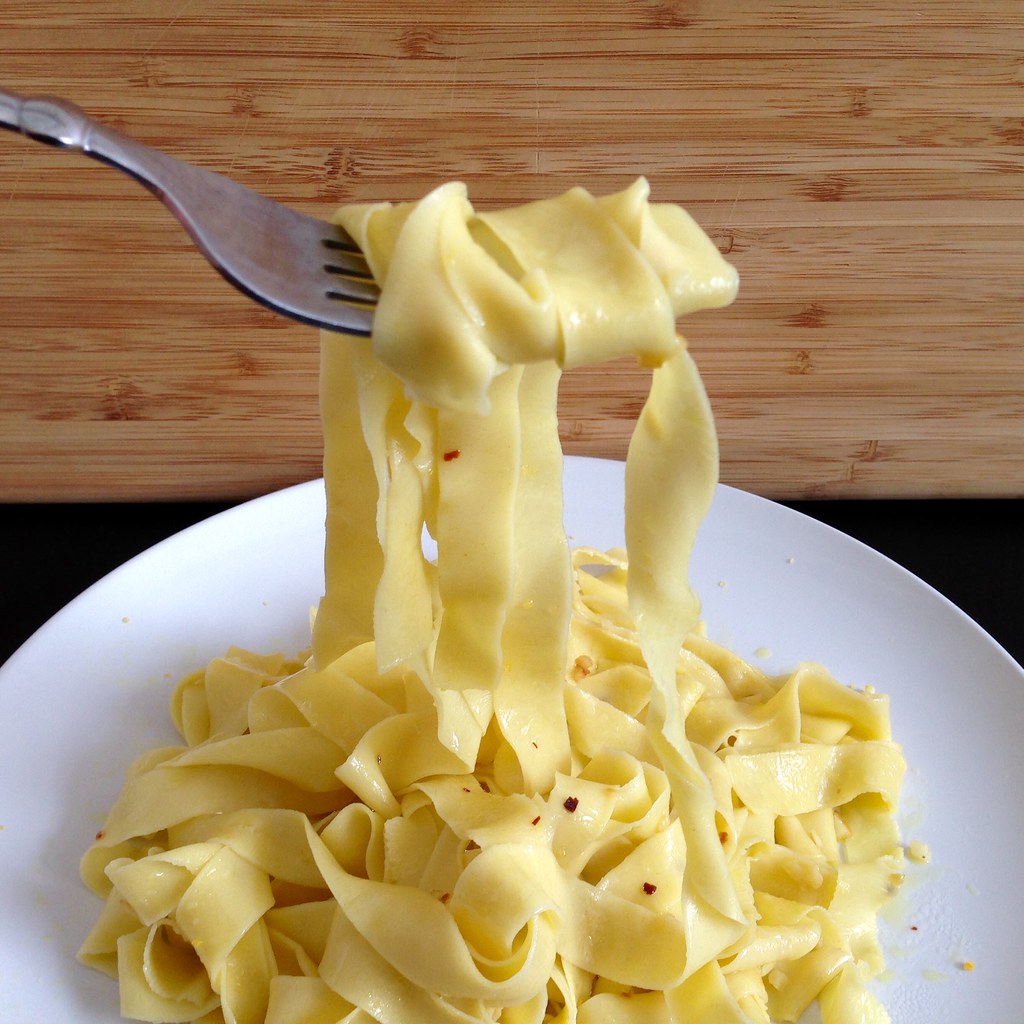 On a large, rimmed baking sheet, make a pile with the flour and dig a well in the middle.  Crack the egg into the well and add the egg yolks and salt.

Using a fork, start stirring the eggs and slowly incorporating more and more of the flour into the well until you have a nice, thick paste.  Combine with the rest of the flour and start kneading with your hands.  If the dough is too dry, wet your hands as many times as you need just for it to all come together.

Continue kneading by hand or in a stand mixer (with the dough hook attachment) until you have a smooth, uniform dough.  Cover tightly with plastic wrap and let rest for at least 20 minutes.  At this point you can refrigerate the dough, well wrapped, overnight and bring it back to room temperature the next day before continuing.

Cut the dough in half.  Run one half through the pasta machine set at its widest setting.  Fold the dough in thirds and run through the machine again, repeating 3 times.  Then, run the dough halfway through and pinch the ends together so it forms a loop.  Adjust the setting to one notch thinner and roll through, continuing to adjust the setting one notch thinner each time the loop has gone all the way around.  When the dough looks almost transparent, stop and cut the dough out of the machine and then in half.  Repeat the whole process with the other half of the dough.  You will end up with 4 sheets of pasta dough.

If your dough is feeling tacky at this point, let it dry a bit on some tea towels.  Otherwise, you can go ahead and fold the dough in half three times so you have a manageable width to cut.  Using a sharp knife, cut the noodles into the width you desire.  Shake out the noodles and let them dry some more on the tea towel.

Bring a pot of salted water to a rolling boil.  Add the pasta and stir occasionally so that the noodles don’t stick to each other.  The pasta is done when they float to the surface.  Remove from the water immediately to preserve its perfect al dente texture.  Toss with the sauce of your choice. 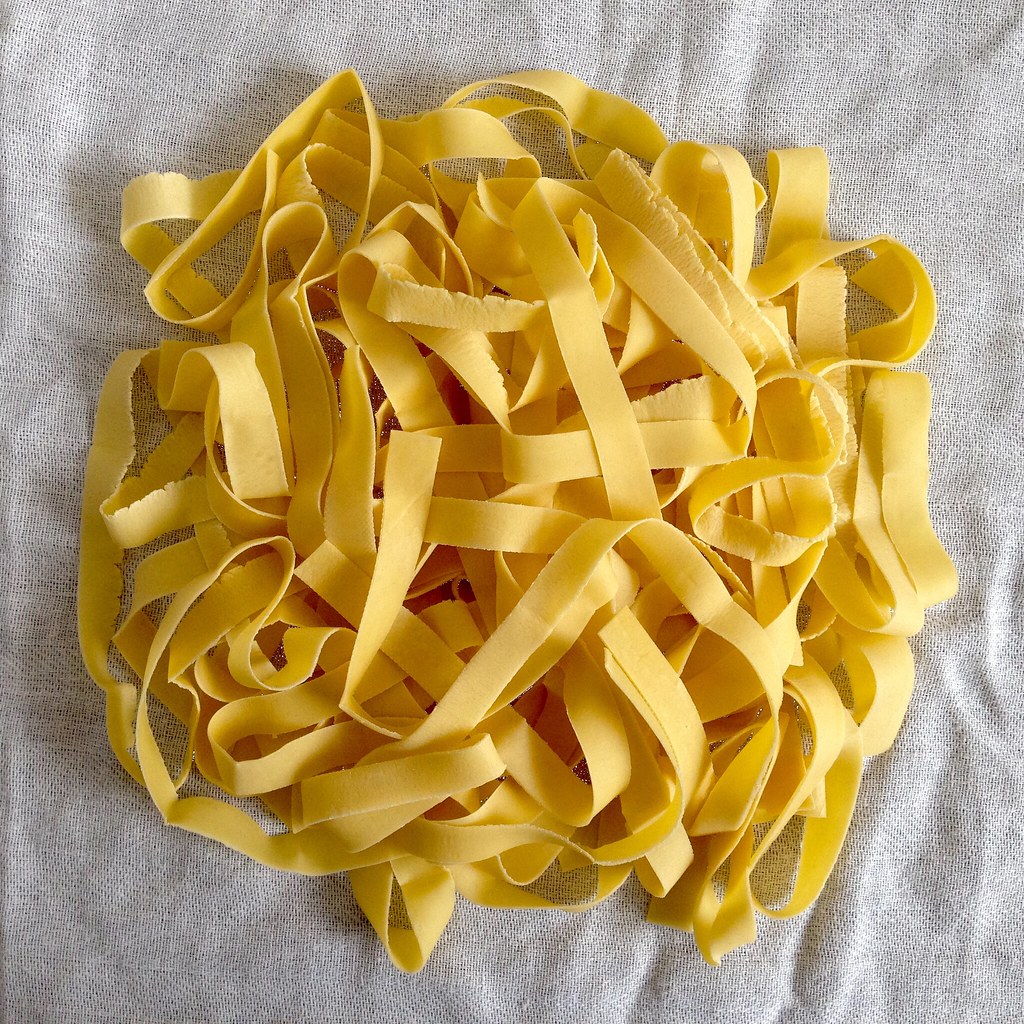 A few suggestions for sauces: