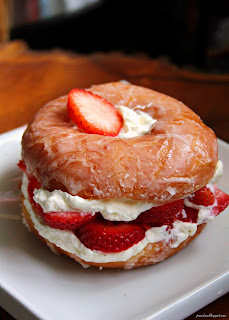 Making a glazed donut the base for strawberry shortcake. It’s a genius idea, in fact.

Strawberry shortcake is one of my favorite desserts… I generally like it on a biscuit base but won’t say no if it’s served on angel food cake or a vanilla cake. I have been making A LOT of donuts lately and I had a light bulb moment where I thought, “how amazing would these glazed donuts be with strawberries and whipped cream?”

Of course the internet was there to let me know that I was not the first person to think of this. I just want to know; if so many people have already had this idea, why weren’t they telling me about it? 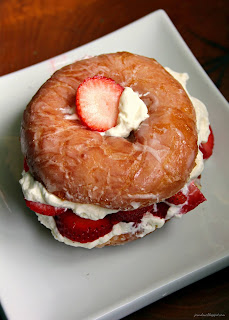 Prepare donuts – Prepare dough according to recipe. Let rise for an hour. Roll out to about 1/4 to 1/2 inch thick. Cut out with cookie or biscuit cutters, then cut out the centers with a smaller cookie or biscuit cutter. Place on a cookie sheet lined with parchment paper. (NOTE – to make things easier I always cut the parchment paper into individual pieces. This makes it much easier to place the donuts in the oil for cooking). Cover and let rise again. 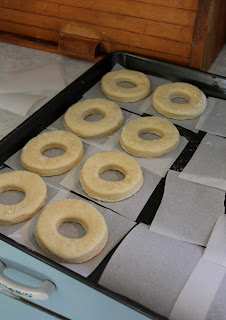 Heat your oil in a large pot to 350 (use a thermometer for best results).

Cook donuts 3 or 4 at a time in oil, about one minute per side, until golden brown. Remove from oil with a slotted spoon and place on wire cooling rack OR directly on paper towel to drain off excess oil. 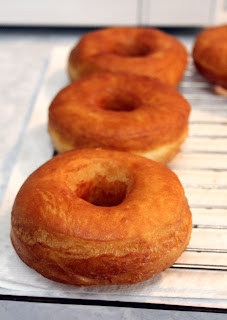 Prepare the glaze – whisk together icing sugar, vanilla, and milk until the texture of thin glue. (You made need to add more icing sugar or more milk to get to the right consistency.) Dip each donut into the glaze. Let cool completely so glaze hardens a bit and is not so sticky. Cut the donuts in half horizontally with a serrated knife. (NOTE – be careful not to squish the donuts or hold the tops so the glaze gets rubbed off!) 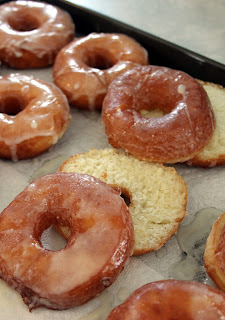 Whip the cream with the vanilla to stiff peaks. (NOTE – to make things easier I beat 2 cups of cream with 1 tsp of vanilla at a time.)

Hull and slice your strawberries. 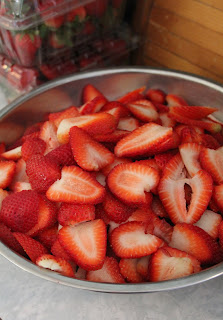 Prepare shortcake – Place the bottom of a donut on a serving plate. Top with a generous scoop of whipped cream. (I used a large cookie scoop full. About 1/4 cup) 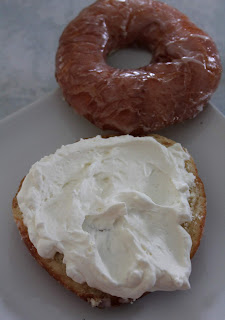 Top with a scoop of strawberries. (I used 1/3 cup measuring cup as a scoop for this.) 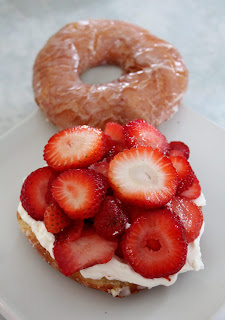 Top with another scoop of whipped cream. (Again, I used a large cookie scoop {about 1/4 cup} for this). Then place the top of the donut on top. Squish it down gently and then place a slice of strawberry on top. 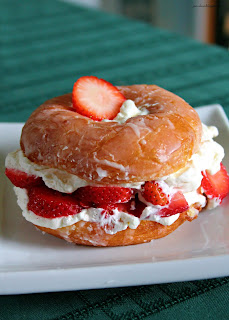 One recipe should yield between 25 – 30 donuts which makes this a fabulous recipe for a fundraiser or family reunion. I made them for a mother’s day get together… 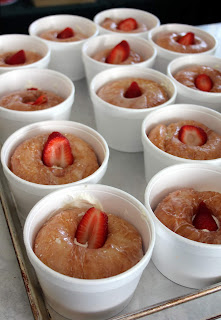 I just put them in disposable soup containers that had lids, which worked great. I made 2 batches and ended up with 60 shortcakes. (FYI – to get 60 I used 4 liters of whipped cream and 10 containers of strawberries.)

Of course, you could use bought donuts to make this wonderful dessert but our Kilkenny Glazed Donuts are so fluffy and tasty that making them is totally worth the extra effort. The only thing we changed from the original recipe is the glaze. We didn’t use the original beer glaze, instead went with a simple vanilla glaze so the flavor of the strawberries can shine through. 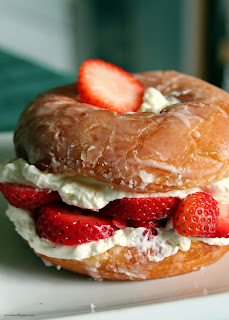 You could also half the recipe if you only wanted to make 12 – 15 donuts. It’s pretty forgiving.

Strawberry shortcake on donuts is the new food trend. I’m making it happen.

Guuuuuys! Just wanted you to know that this is amazing with apricots as well! 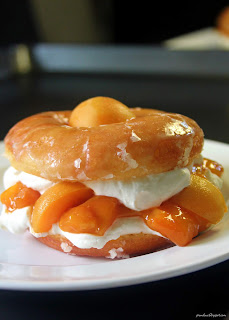 I just cooked a few down on the stove top for about 5 minutes, let that cool down a bit, and then threw in a a bunch more that I chopped up so there was bigger pieces as well. 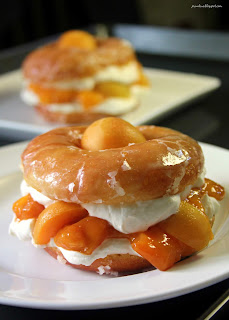 Imagine all the possibilities for this! #ImExcited

Overnight Oats in a Jar almond