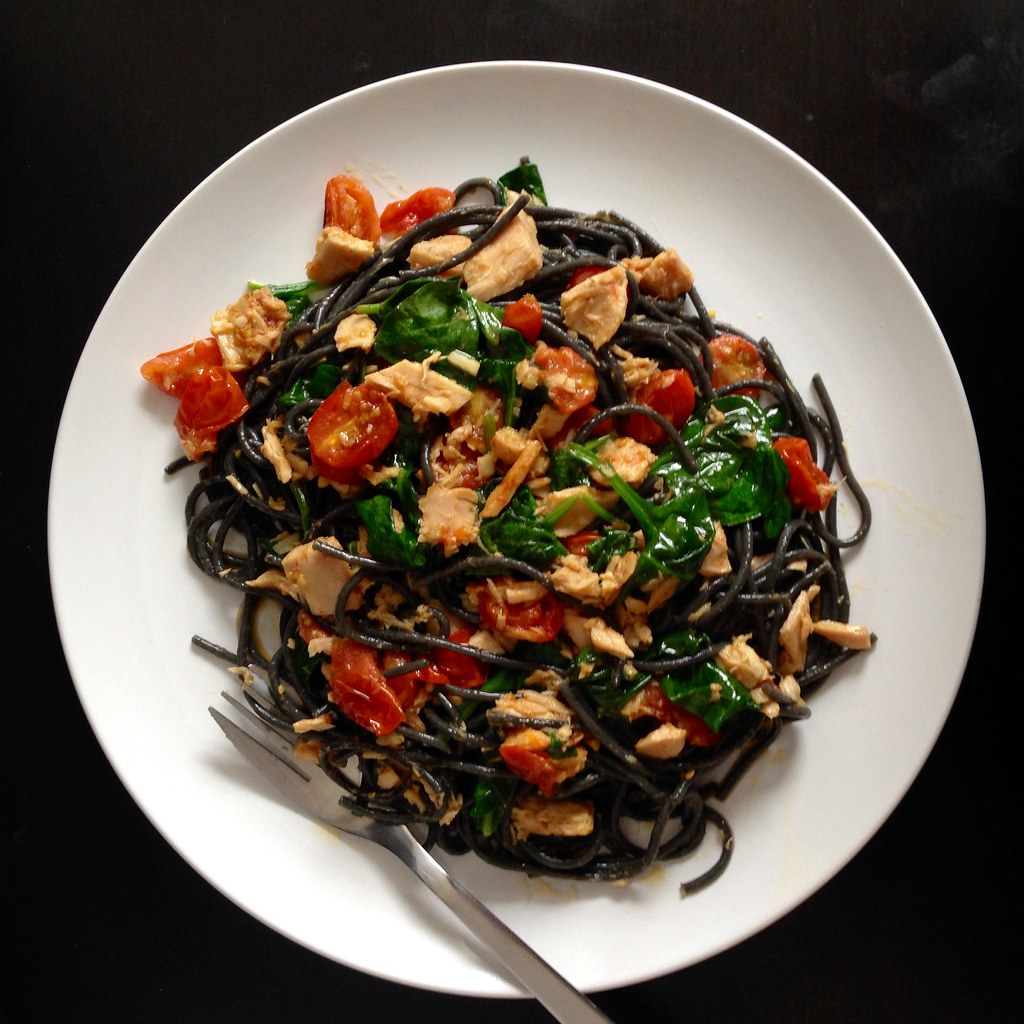 I have made this dish four times in as many days since I first discovered it.  Maybe it’s because I’m feeling nostalgic for Italy and wanting to get out of this crazy New England snow.  Maybe it’s the way the olive oil, tomatoes, and lemon juice come together like magic to make this unbelievably fresh tasting sauce.  Or maybe it’s the way the tuna and garlic linger on the tongue and then in my dreams.  Whatever it is, you need to make this pasta stat.

This dish comes together quickly; while the pasta is cooking, you’ll be starting the sauce so that by the time the pasta is almost al dente, you toss it into the pan that the sauce is in to finish cooking it.  So I usually start cutting up the tomatoes and mincing the garlic while I wait for the water to boil.

For this recipe, make sure you use the tuna that’s packed in olive oil, not water.  And don’t pour out the oil; add it to the sauce.  Speaking of olive oil, you’ll want to use a good one, and lots of it.  I used the last of the olive oil I got from Tuscany for this, and it was worth it.  I also used the last of the squid ink pasta I got from Venice since I figured the brininess would go well with the tuna (and because it’s photogenic).  All this just means I’ll have to go back to Italy soon to stock up again! 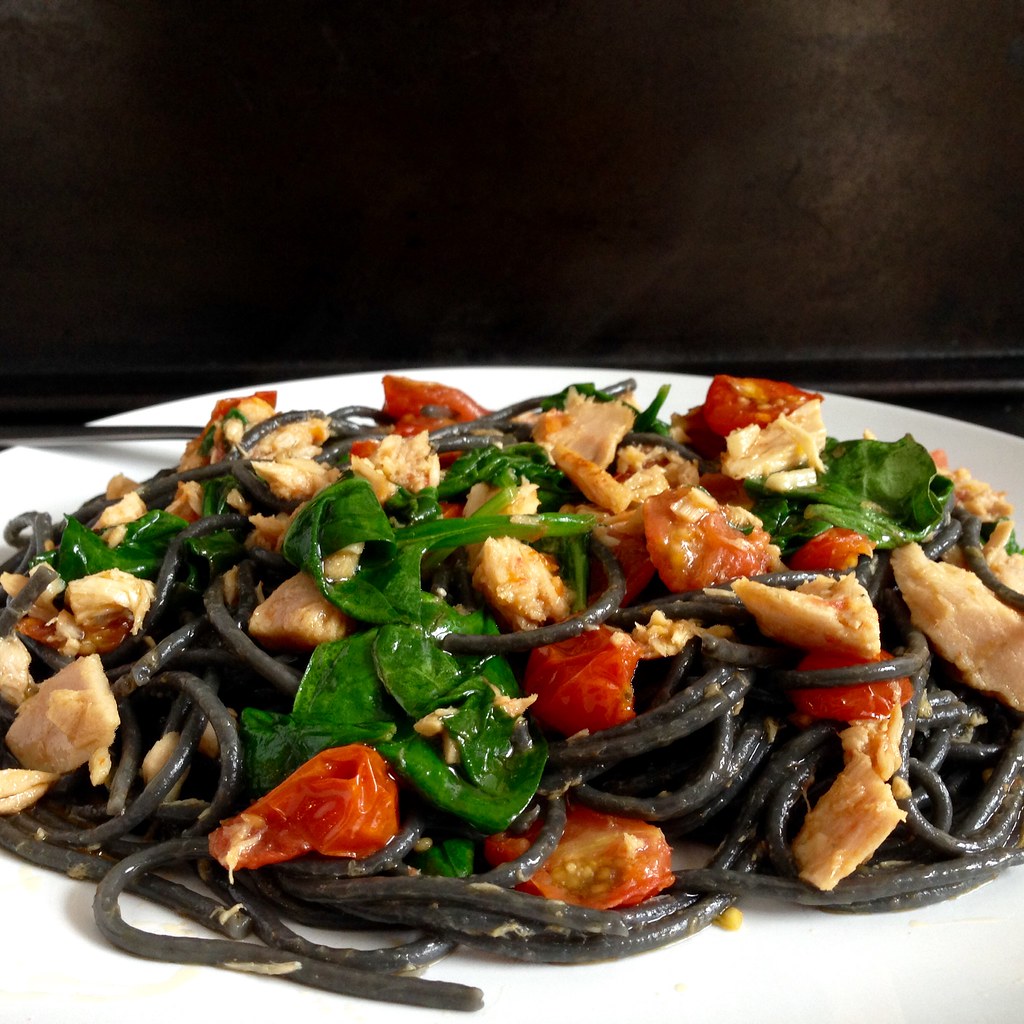 Get a large pot of salted water boiling.  Add the pasta and start a timer to cook for 3 minutes less than what the package calls for (i.e. if the package says to cook the spaghetti for 10 minutes, cook it for 7).

In a pan large enough to hold all the pasta, add 5-6 generous glugs of olive oil heat on medium-high (it should be at least twice what you think you’ll need).  Once the oil starts to shimmer, add the tomatoes and a generous pinch of salt.  While the tomatoes soften, you may want to (carefully!) smoosh them to help release their juices.  When there are 2 minutes left on the pasta, add the minced garlic.  When there is 1 minute left on the pasta, add the tuna plus the oil it’s packed in, breaking up any large chunks of fish.

When the timer is up on the pasta, use tongs or a pasta spoon to add the spaghetti to the pan.  Add some of the pasta cooking water to the pan too (the original recipe calls for a few ladlefuls, but I like a little less than that).  Add the greens and lemon juice and toss everything around, cooking until the leaves is just wilted.  Taste the sauce and season with salt and pepper as needed. 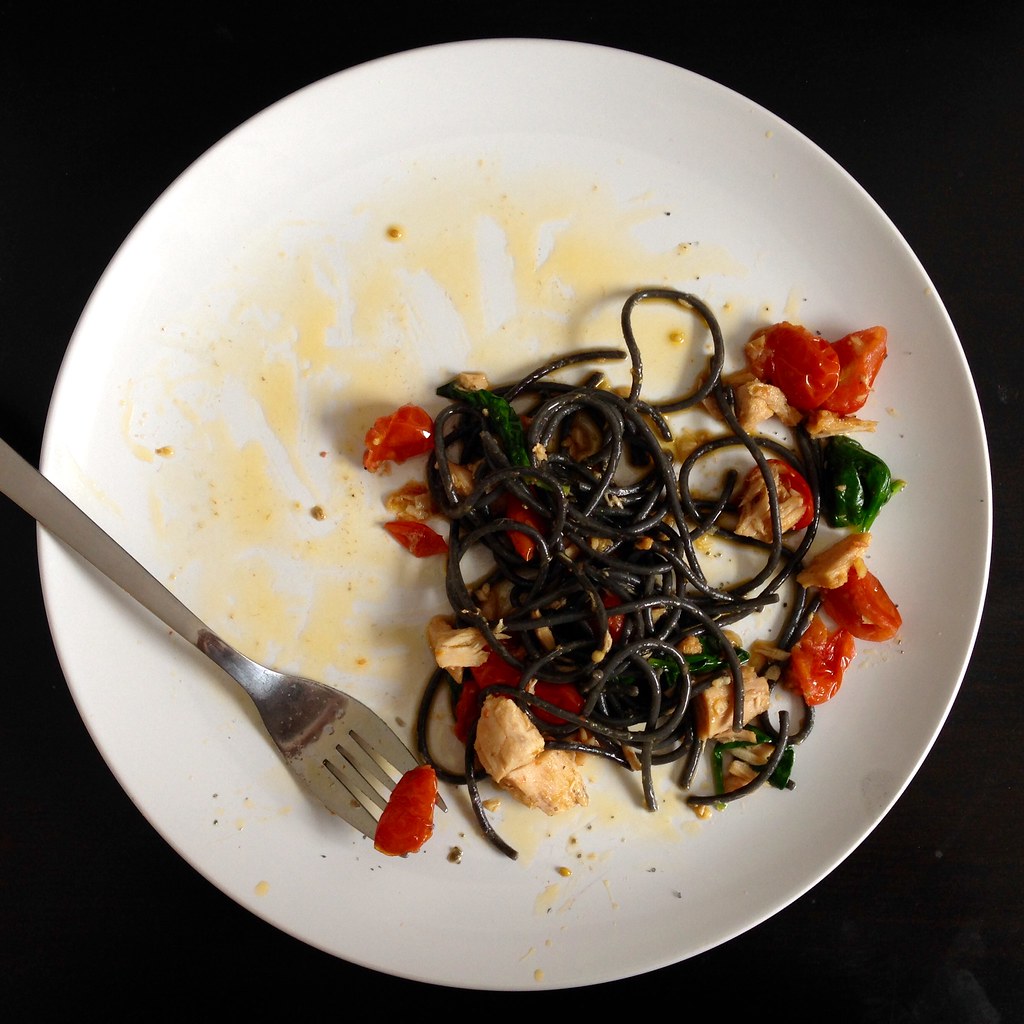