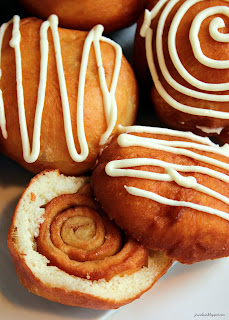 I know what you are thinking….. why on earth would someone put a cinnamon bun inside a donut?

Well, why not? I mean… cinnamon buns = heaven on earth, and donuts = best things ever, so together = *fireworks* *unicorns* *rainbows*

Want to make new friends? Give people one of these and they’ll be lining up. For real though.

The great thing about this recipe is it is one dough that you can make both components of the treat with. I made the recipe large enough to get 24 but you can half it if you only want 12. Reeeeeeally though, who only wants 12? Come ooooon…. 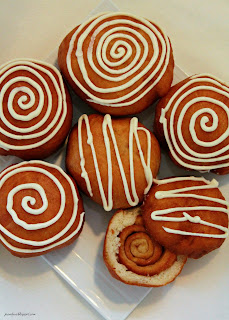 Oil for frying (about 1 liter)

In a medium bowl, stir together the yeast, hot water, and 2 tsp sugar. Let sit for 10 minutes for yeast to proof.

In a stand mixer with the dough hook place the 1/2 cup sugar and 2 tsp salt.

In the microwave heat the 2/3 cup butter and 1 1/2 cup buttermilk for about 1 1/2 to 2 minutes – should be hot but still able to place your finger in comfortably.

Pour the buttermilk mixture over the sugar mixture in the stand mixer, stir,  and let cool to lukewarm.

Add in the flour and eggs to the mixing bowl. Add in the proofed yeast mixture. Using the dough hook, mix on low until dough pulls away from the sides. Then medium for 5 minutes. (You can also take out of bowl and knead for 5 minutes if your bowl is too full!).

Place in an oiled bowl, cover, and set somewhere warm to rise for an hour. 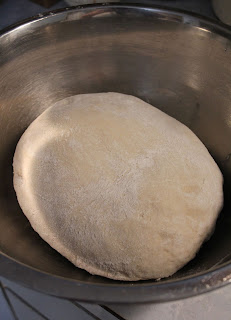 After an hour it should be doubled in size. 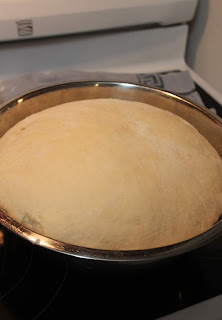 Cut off 1/3 of the dough. Cover and place the remaining dough in the fridge.

Take the 1/3 you have cut off an place in a lightly floured work surface. 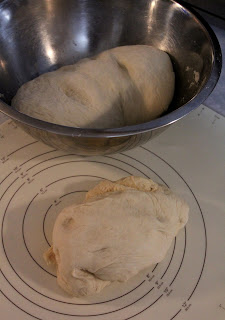 Roll the dough to 24 X 6 rectangle. Brush with the 1/2 cup melted butter and then sprinkle with the brown sugar and cinnamon. 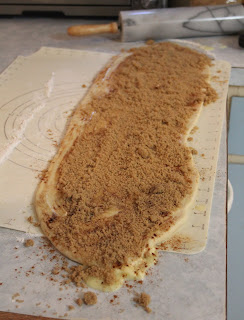 Roll up jelly roll style and then slice into 24, 1 inch pieces. I find a serrated knife works best. 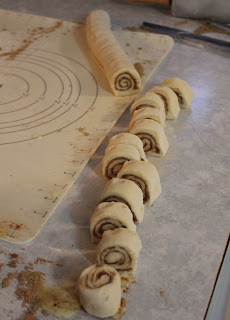 Place into the prepared muffin tins, cut side down. 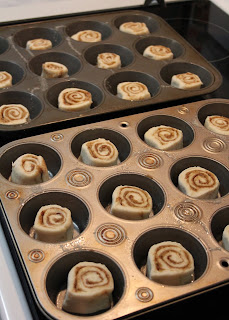 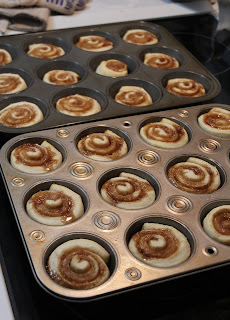 Remove from tins and let cool on wire racks. I flip them upside down so any gooeyness from the bottom runs back on to them instead of dripping off. 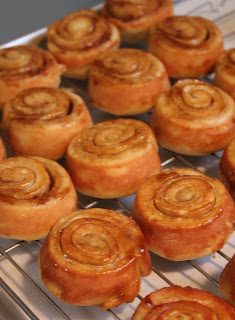 When the cinnamon buns are cool – take the dough from the fridge and divide it into 24 equal portions. 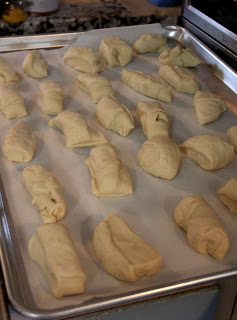 Take one piece and flatten it in the palm of your hand. Place a cinnamon roll, top side down, on top of the dough. 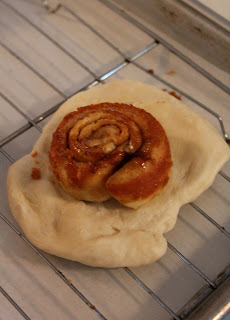 Pinch the dough closed around the cinnamon bun and place, seam side down, on a cookie sheet lined with parchment paper. Place them about an inch or 2 apart so they have room to rise. You DO NOT want them touching! Repeat with remaining 23 pieces of dough and cinnamon buns. 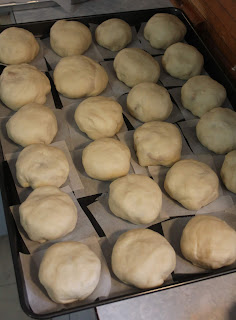 Cover with a clean tea towel and let rise somewhere warm for 30 minutes. About 15 minutes into the rise time, start heating your oil on the stove top in a large pot. Your oil needs to reach 350 degrees. (This usually takes 10 – 15 minutes over medium heat) Your donuts should be risen after 30 minutes as per photo below. 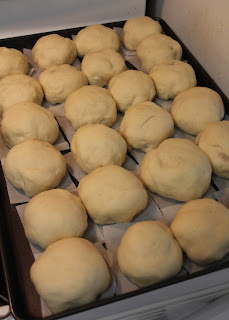 Place 3 or 4 donuts at a time into the hot oil. Fry for 1 minute on each side – until deep golden brown. Make sure to use a thermometer to monitor your oil temperature. If it drops too low your donuts will soak up too much oil, if it goes too high, your donuts will cook on the outside but be raw in the middle. 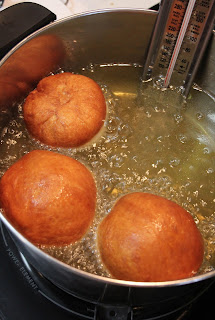 Carefully removed the cooked donuts from the oil using a slotted spoon. Place on paper towel or a wire rack over paper towel to absorb some of the oil. 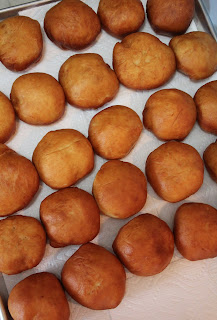 Prepare frosting – beat cream cheese until smooth. Beat in the icing sugar and vanilla until creamy, scraping sides of bowl as needed. Place in a piping bag or a large Ziplock bag with the corner snipped off. Drizzle over the donuts in a zig zag or swirl pattern. 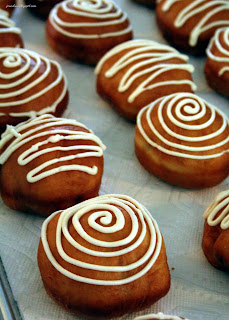 You can also just spread a little on with a knife… but drizzling is so much more fun. 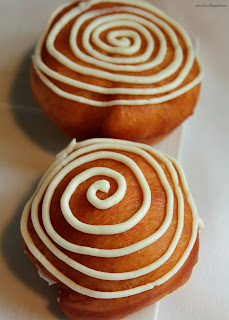 Want to peek inside one? 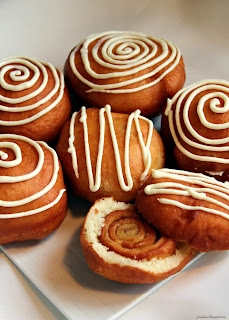 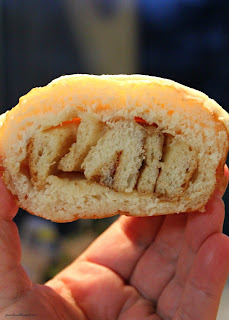 What a lovely surprise inside, am I right? 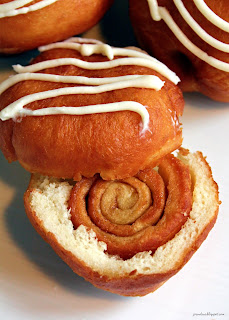 Can’t decide between a cinnamon bun or a donut? Now you don’t have to.