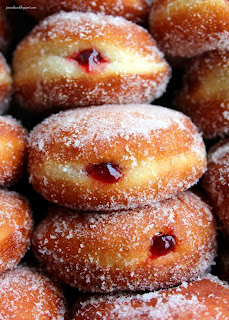 If you’re Canadian I’m pretty sure it’s the law that you know which movie that comes from. Strange Brew (1983). You know, Bob and Doug Mackenzie… hosers…. take off, eh…..

I’ll forgive you if you don’t know it. But look it up. Watch it. Seriously. It’s a Canadian thing.

Let’s give them their own star on the walk of fame. 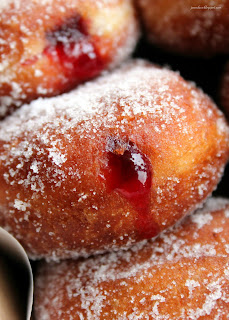 Oil for deep frying (about 1 litre)

sugar to roll the donuts in

Prepare dough – Heat buttermilk over medium heat until just starting to steam. Remove from heat and stir in the sugar and let cool for 5 minutes. Pour into a large bowl and sprinkle the yeast on top and let sit another 5 minutes – until yeast blooms.

Whisk the butter, eggs, vanilla, and salt into the yeast mixture. Slowly stir in the flour until soft, but not sticky, dough forms. Knead for 5 minutes on a floured work surface.

Place in an oiled bowl, cover with a tea towel, and set somewhere warm to rise for an hour.

After an hour, roll out dough to 1/2 inch thick. Cut with a 2.5 to 3 inch biscuit cutter. Place donuts on a cookie sheet lined with parchment paper, cover with a tea towel, and let rise another 45 minutes or so.

When the second rise time is almost up, heat your oil in a large pot to 350 degrees. (This takes about 15 minutes so start to heat it up after dough has been rising about half an hour.)

Place a shallow bowl filled with sugar beside where you are going to be placing the donuts after frying.

When oil reaches 350, gently slide 3 or 4 donuts into the oil and fry 1 minute on each side – until evenly browned. Remove from oil with a slotted spoon and place on paper towel to drain.

Roll the donuts in the sugar to coat.

Repeat until all donuts have been cooked. 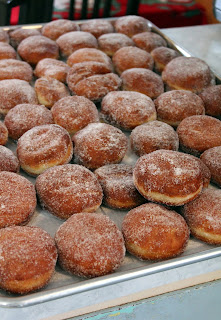 When they are cooled off – place the jelly in a piping bag fitted with a long nozzle. Poke a chopstick or the handle of a wooden spoon into the side of each donut to create a hole. Then press the tip of the piping nozzle into the hole and squeeze in some jelly.

Repeat until all donuts are filled!. 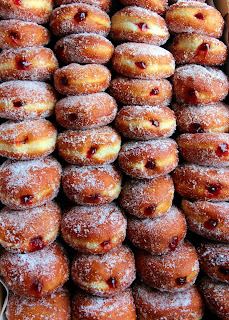 These are best eaten the day they are made but can be frozen. 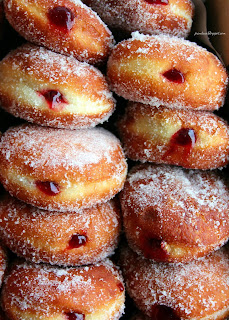 Want to see the inside? 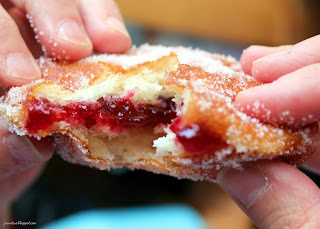 Look at all that squishiness and gooey jelly!

Personally, I like raspberry jelly the best for jelly donuts but you can use your favorite! You can also dust the donuts with powdered sugar after they have cooled INSTEAD OF the regular sugar…. but I like the regular sugar because that’s how we had them growing up.