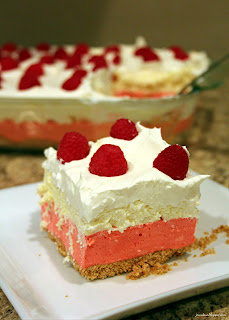 This dreamsicle dessert looks so pretty and tastes delicious and is so rich that a small piece goes a long way. That makes this 9 x 13 dessert perfect for family gatherings and potlucks! I went with raspberry juice and raspberry Jello so it would be Christmas-y but you can use orange juice and orange Jello for another delicious flavor.

You dirty a few dishes with this one but it’s all worth it in the end! 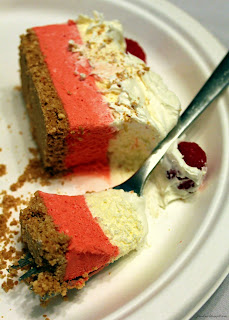 Prepare bottom layer – mix together crumbs and butter and press into a 9 X 13 pan. Chill the pan while you prepare the next layer. 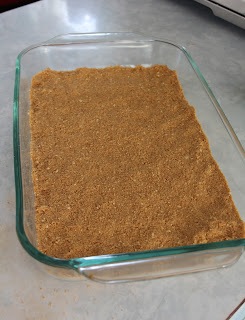 Prepare raspberry layer – microwave the raspberry juice for 2 minutes (almost boiling). Whisk in the 2 pkgs of raspberry Jello. Set aside. In a separate bowl, beat cream cheese until smooth, scraping sides as needed. Very slowly pour the jello into the cream cheese, beating well between additions. Beat until smooth. Whisk in 2 cups of Cool Whip until smooth. Pour over the bottom layer. Let chill while you prepare the next layer. 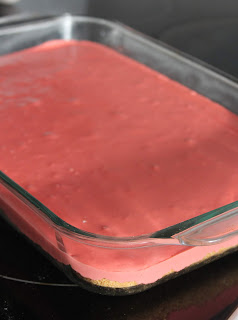 Prepare pudding layer – beat cream cheese until smooth, scraping sides of bowl as needed.Very slowly beat in the milk, scraping bowl between additions. Beat until smooth. Beat in 2 pkg of vanilla pudding. Lastly, beat in the 2 cups of Cool Whip. Spoon onto the raspberry layer and then smooth out evenly. 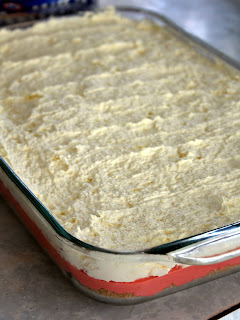 Top with the remaining Cool Whip (usually about 1 – 2 cups), spreading evenly. Then top with fresh raspberries. 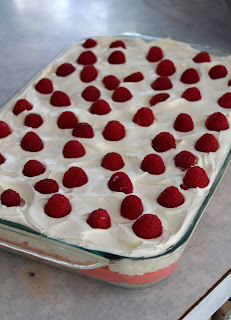 Let chill until ready to serve – at least a couple of hours. 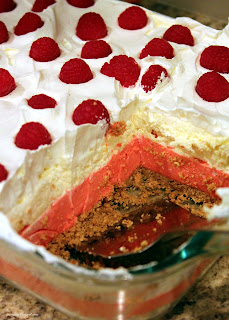 If you want to make the orange version – instead of placing raspberries on top, I like to grate some orange rind over the whipped topping. Not as bold as the berries, but still beautiful! 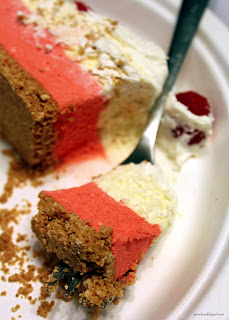 I loved the texture of this dessert – so smooth and creamy. Sue, not so much. She found the Jello layer too spongy for her liking. To each their own! I know the orange version is just as delicious but I have yet to try any other flavor…. maybe lemon or lime or even grape?? Something I will be keeping in mind for the spring! A fun colorful dessert that works for holidays or every day!