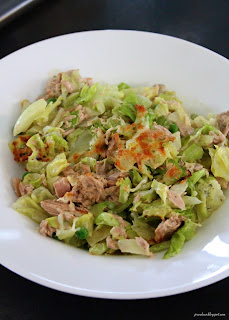 Tuna noodle casserole has never been one of my favorite meals. Mom loves it though so we used to have it quite a bit growing up. Chow mein noodles, cream of mushroom soup, tuna, and peas.

I was excited to try and make something similar but low carb as I am on a keto eating plan. I wanted to show mom that it’s possible to make comfort food that is low carb and high protein that still tastes great.

Turns out I actually prefer this version of the classic dish. I know it sounds a bit sketchy… I mean… tuna and cabbage isn’t the first thing you think of when you think delicious food, am I right?

Seriously though… give this a try. Even if you aren’t following keto it’s a yummy alternative to old fashioned tuna noodle casserole. 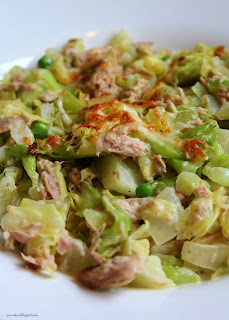 Heat oil and butter in a large, oven safe frying pan. Cook cabbage, onion, celery, and garlic for about 10  minutes – until cabbage is softening.

Mix in the dill and mustard.

Stir in the cream and half of the Parmesan cheese until cheese is melty. Simmer to thicken.

Add in the tuna and peas. 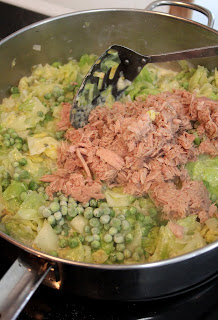 Sprinkle with the remaining Parmesan. 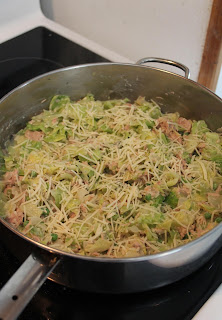 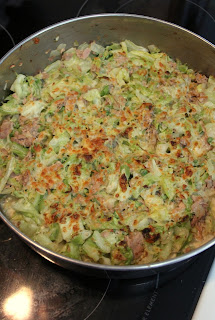 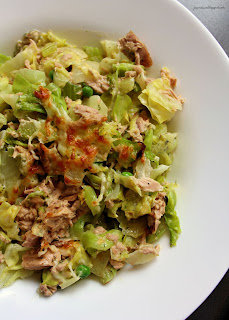 It does taste like tuna noodle casserole but you’re not going to fool anyone. I mean… it’s cabbage.

BUT… if you are doing keto or low carb, it’s a great alternative.

Mom loved it. She said she still prefers noodles but this was tasty in it’s own right.

I agree. As a low carb, high protein, high fat meal it is very filling and totally qualifies as comfort food.