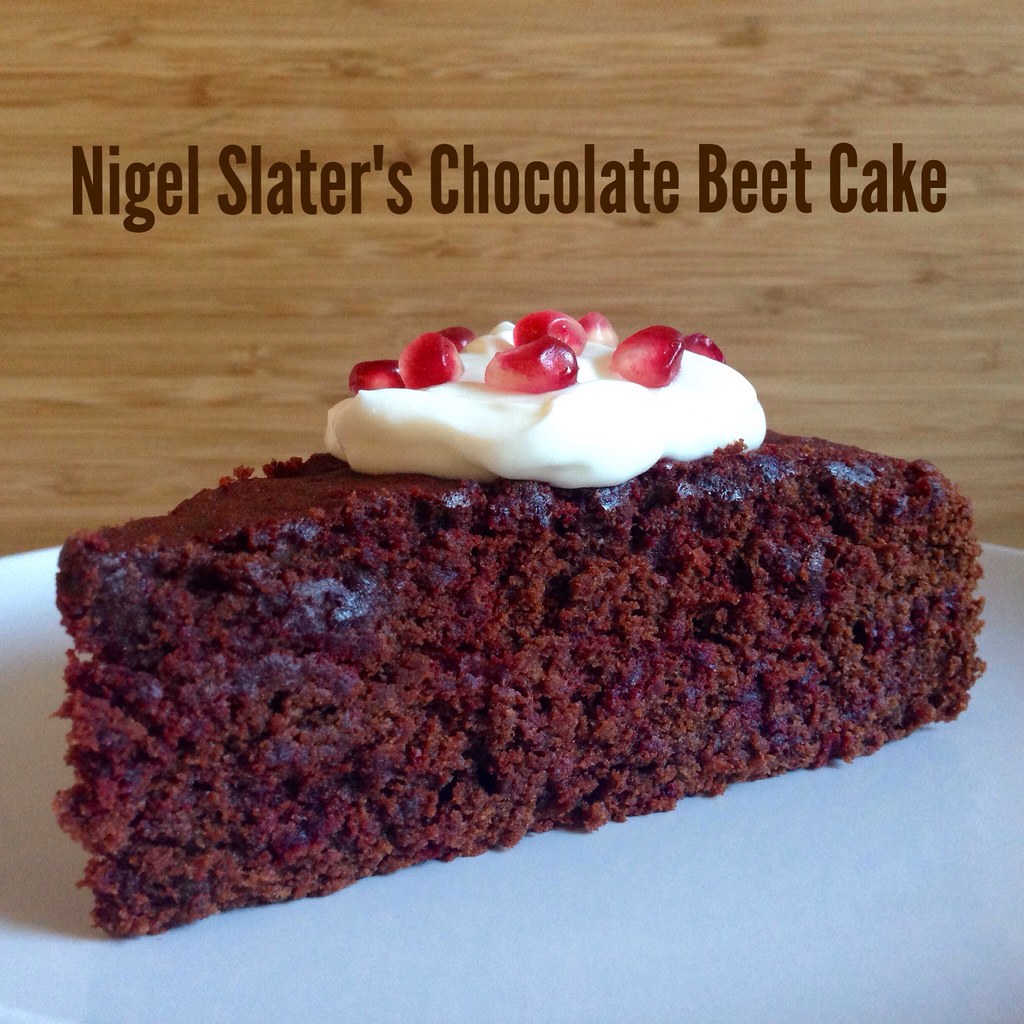 Everyone once in a while I’ll look at my Boston Organics no-list and decide to update it so I can try something new.  That happened last week with beets.  I ended up getting 4 beets and no idea what to do with them after I remembered I don’t particularly like beets, which is why they were on the no-list to begin with.  Sigh.  When my friend, Evelyn, suggested that I make red velvet cake I looked up a couple of recipes but didn’t feel like making a cream cheese frosting to go along with it.  Then I found Nigel Slater’s genius recipe for an extremely moist Chocolate Beet Cake on Food52.  I was sold. 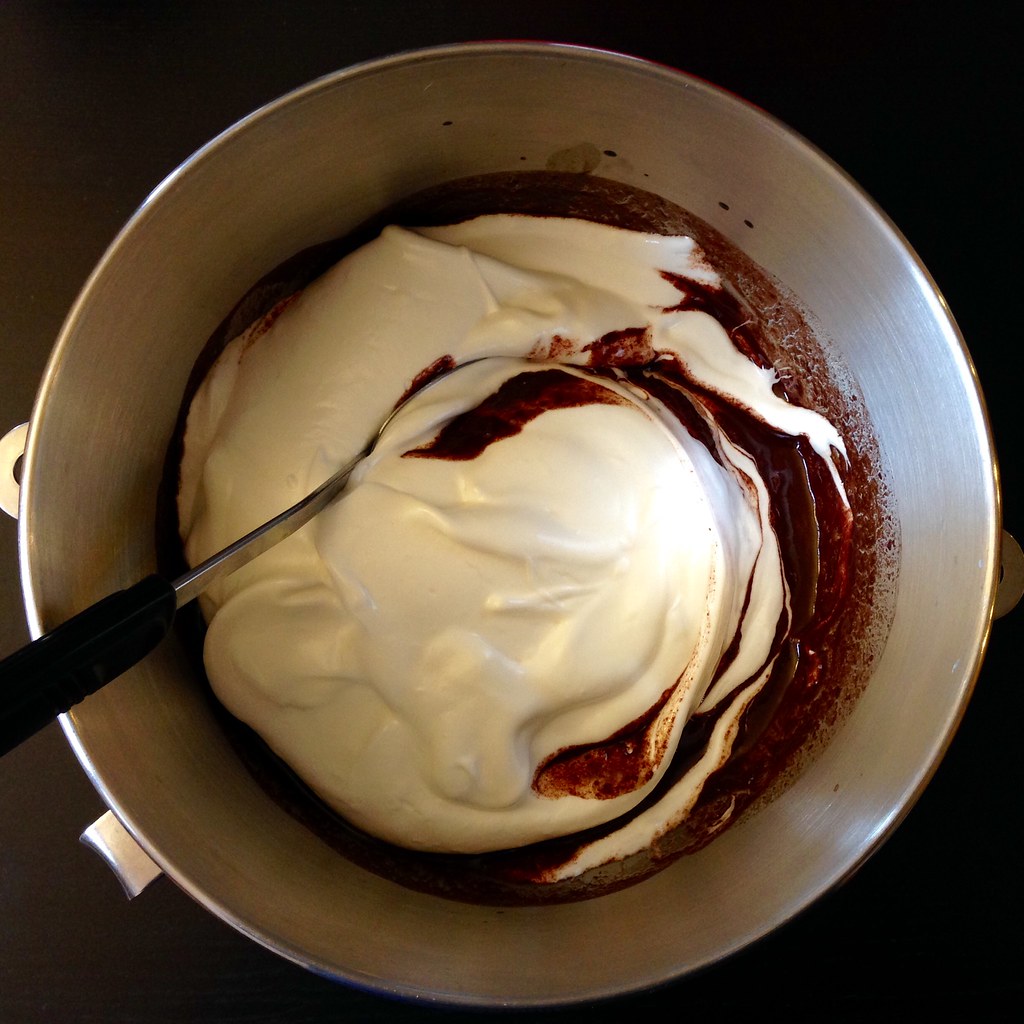 The directions are a little fussy (boiling the beets whole and then peeling after they’re cooked, not stirring the chocolate while it’s melting, etc.) but I pretty much followed them to a T except I did add the sugar gradually into the egg whites while they were being beaten instead of folding it in afterwards.  Since folding something into egg whites is already such a precarious operation and beating sugar into egg whites helps to stabilize the whites, I figured it was a win-win situation.  I also decided I didn’t want to risk dyeing my food processor bright pink and just grated the cooked beets into a coarse purée using a box grater, which David Lebovitz suggested in his post about this same recipe.  While this recipe isn’t the quickest or simplest, I agree with David when he says that it tastes better the second day (or even the third, if it lasts that long), so you can totally make this the day before you need it if you’re in a time crunch. 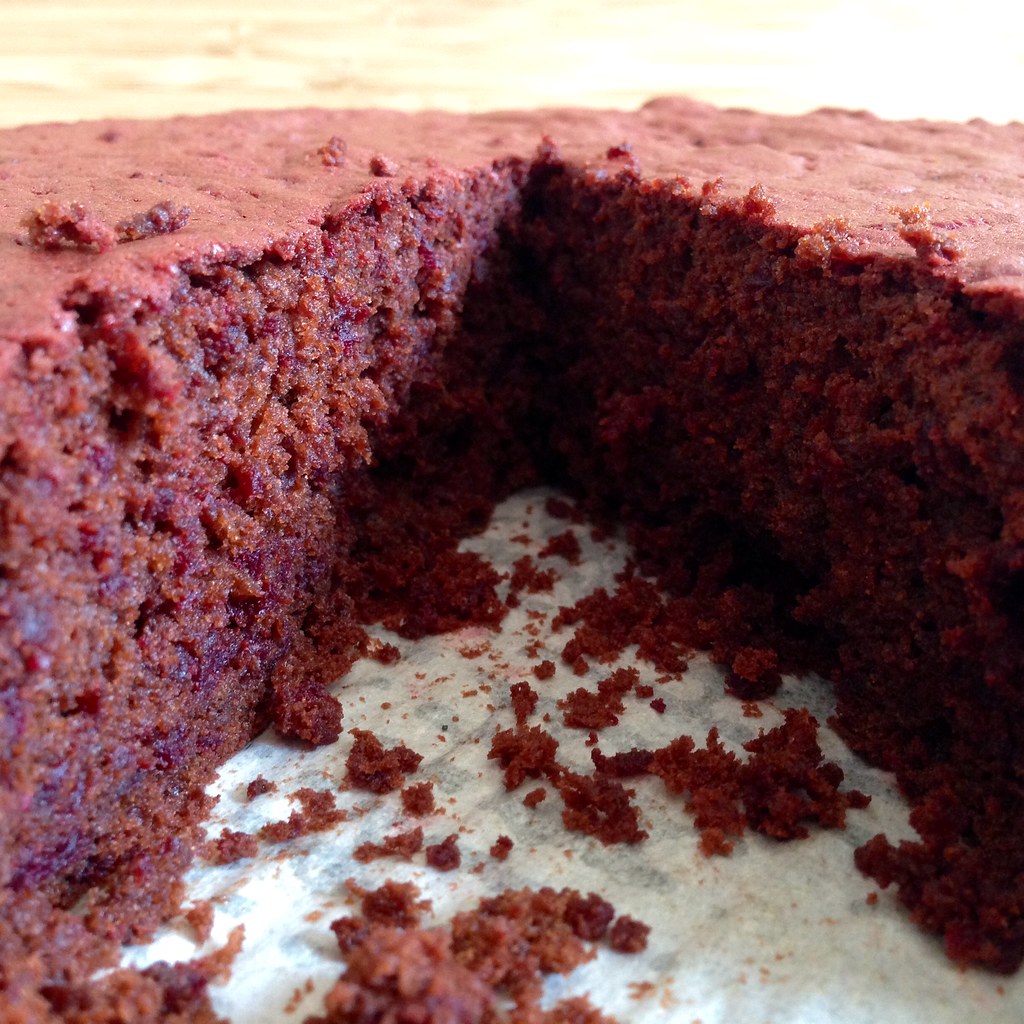 Two words of caution:  make sure you do not overmix the batter and make sure you don’t overbake.  Overmixing will cause you to lose the precious air pockets you created when whipping the egg whites.  This is what keeps the cake from being a dense brick.  Also, if you overbake the cake, you’ll lose all the delicious moistness from the beets. 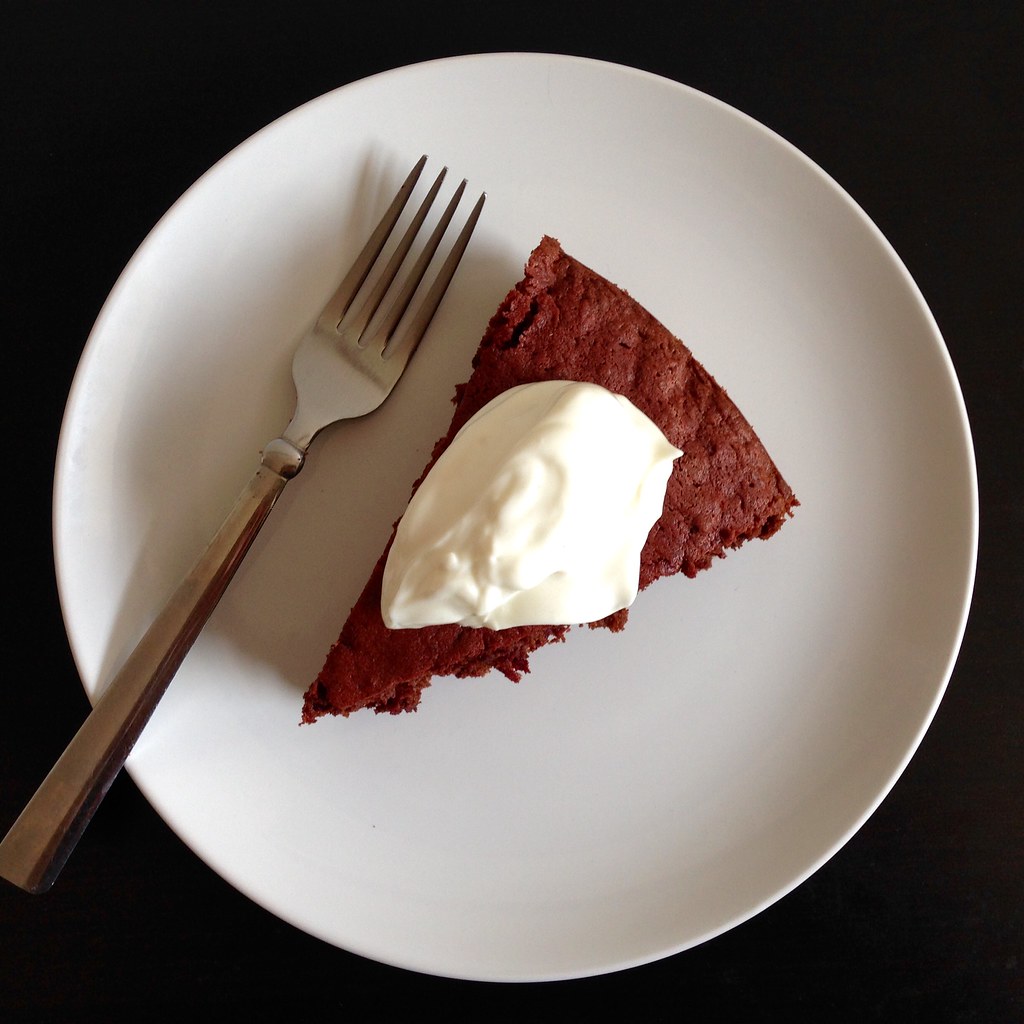 Since I didn’t have any crème fraîche (who does?!) I topped my cake with Greek yogurt instead.  I imagine sour cream, coconut whipped cream, or a good vanilla ice cream would work just as well.  And since I didn’t have any poppy seeds on hand, I sprinkled on some pomegranate arils instead.  I like how the pomegranate echoed the color of the beets used in the cake and also enhanced the tartness of the Greek yogurt. 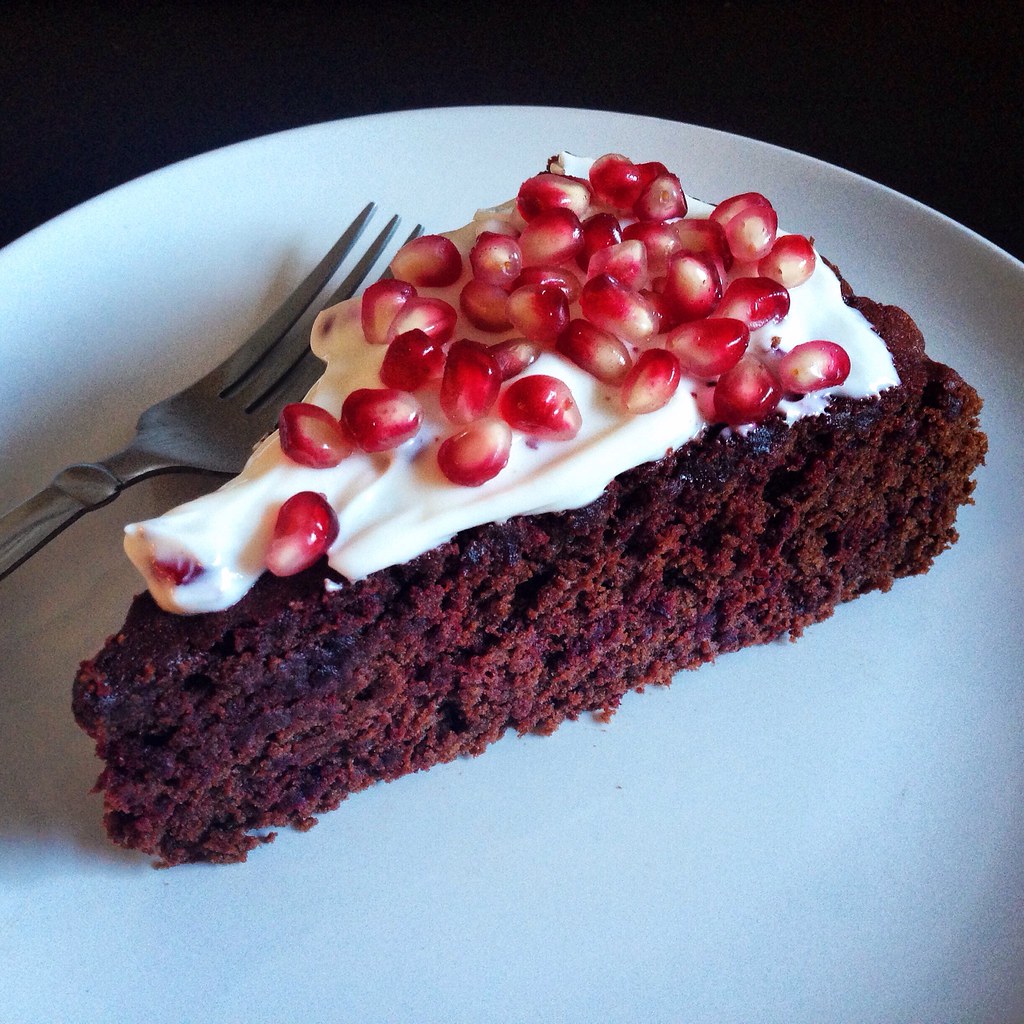 Lightly butter an 8-inch springform cake pan and line the base with a round of parchment paper. Heat the oven to 350°F.

Cook the beets, whole and unpeeled, in boiling unsalted water. Depending on their size, they will be tender within 30 to 40 minutes. Young ones may take slightly less. Drain them, let them cool under running water, then peel them, slice off their stem and root, and grate or process in a blender or food processor until a coarse purée.

Melt the chocolate, broken into small pieces, in a small bowl set over a pot of simmering water. Don’t stir.

When the chocolate looks almost melted, pour the hot espresso over it and stir once. Cut the butter into small pieces and add to the melted chocolate. Push the butter down under the surface of the chocolate with a spoon (as best you can) and leave to soften.

Sift together the flour, baking powder, and cocoa. Separate the eggs, putting the whites in a large mixing bowl. Beat the yolks together.

Remove the bowl of chocolate from the heat and stir until the butter has melted into the chocolate. Let sit for a few minutes, then stir in the egg yolks. Do this quickly, mixing firmly and evenly so the eggs blend into the mixture instead of cooking. Fold in the beets.

Whisk the egg whites until they form soft peaks, then add the sugar gradually as you continue to whip until all the sugar has been incorporated and the egg whites form stiff peaks. Fold the beaten egg whites into the chocolate mixture and then fold in the flour and cocoa.

Transfer quickly to the prepared cake pan and put in the oven, decreasing the heat immediately to 325°F. Bake for 40 minutes. The rim of the cake will feel spongy, the inner part should still wobble a little when gently shaken. Test with a cake tester or toothpick too — if it is still gooey in the center, continue baking just until moist crumbs cling to the tester.

Set the cake aside to cool, loosening it around the edges with a thin icing spatula after half an hour or so. It is not a good idea to remove the cake from its pan until it is completely cold. Serve in thick slices, with crème fraîche or Greek yogurt and poppy seeds or pomegranate arils. 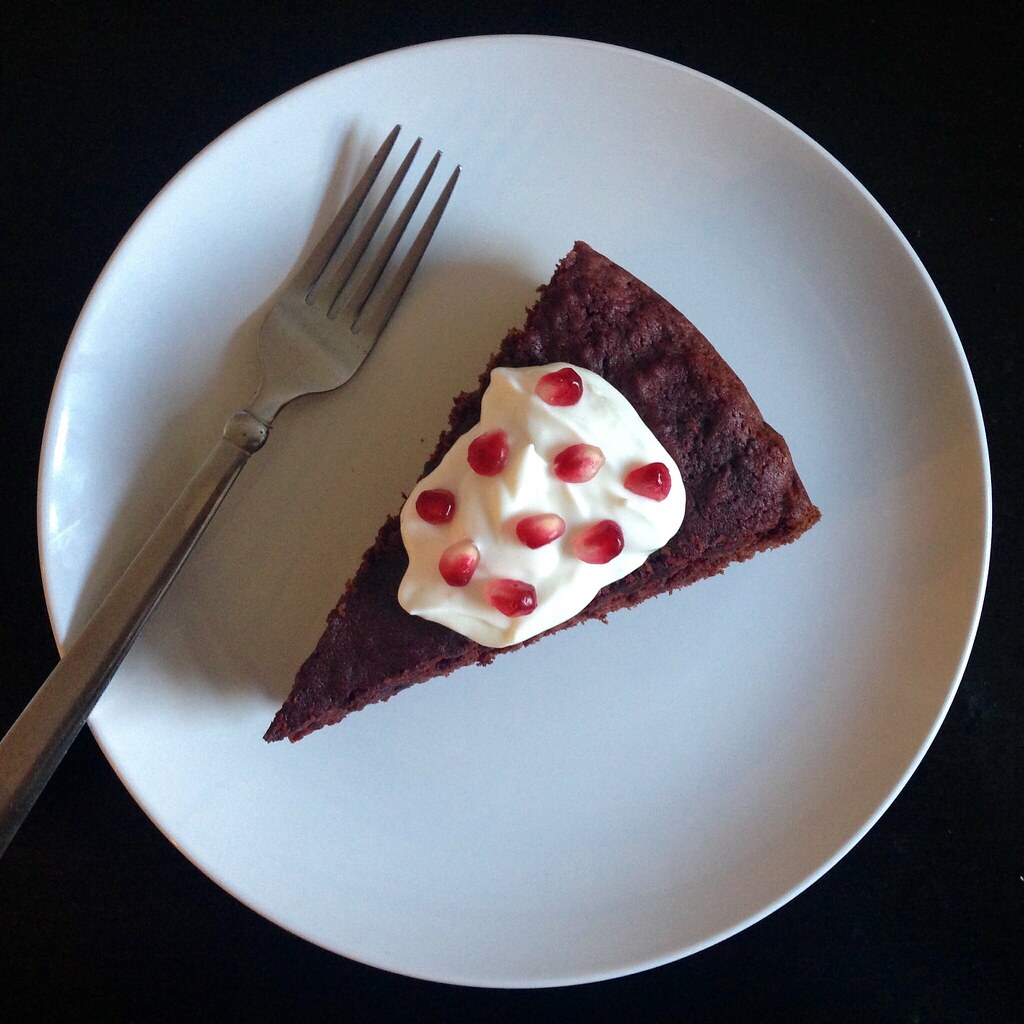 This cake is definitely on the less sweet side, and because I used the coarse grater to process the cooked beets, there were several moist chunks of beets laced throughout the cake, which I didn’t mind.  Other than that, if no one had told me there were beets in this cake, I probably would never have guessed.  If you want to get rid of all traces of beets in this cake, you’ll probably want a finer purée.