One of the best meals I’ve ever had was at Alain Passard’s L’Arpège in Paris.  My friend Ellen and I were lucky enough to score reservations for lunch there and chose to go with the tasting menu.  After what seemed like a dozen divine courses, the main entree was brought out for us to see: 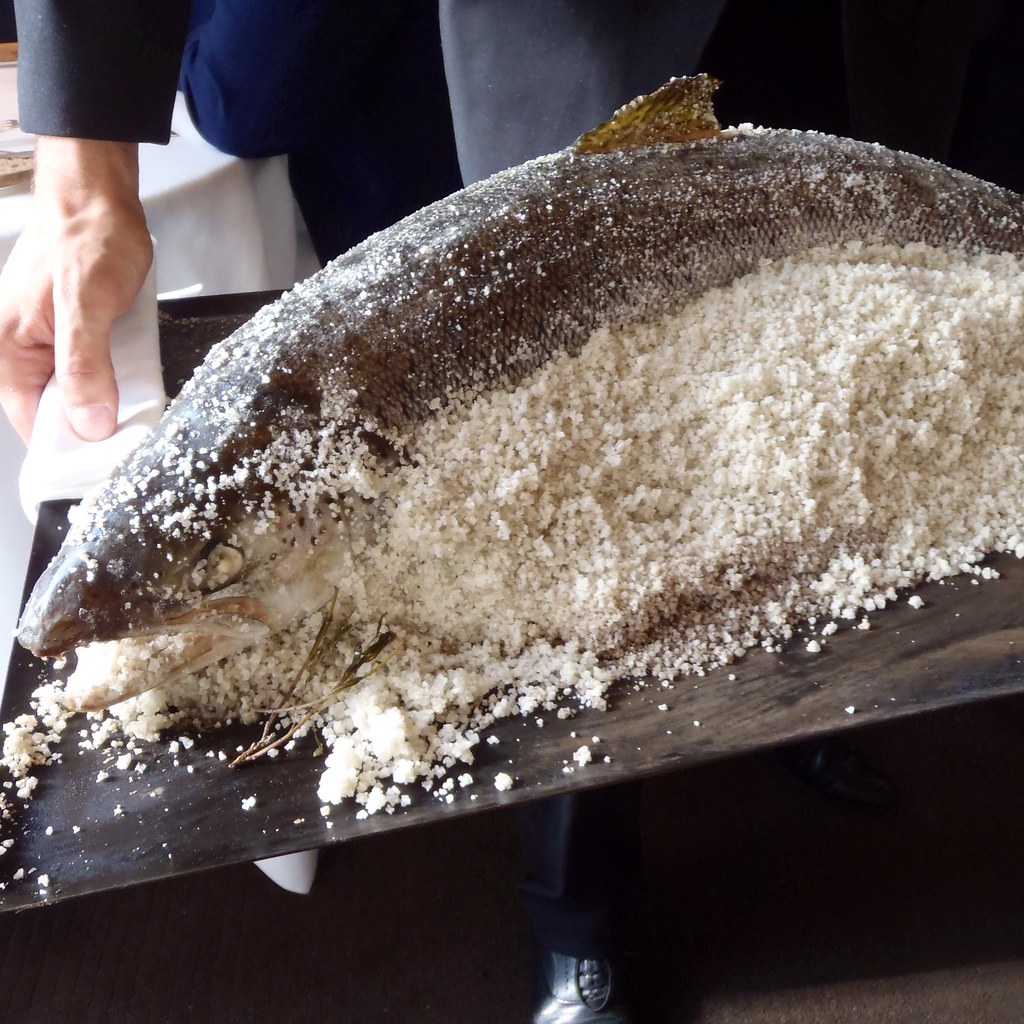 An entire salmon, roasted in a salt crust!  After they showed it to us, it was brought back to the kitchen and filleted and plated. 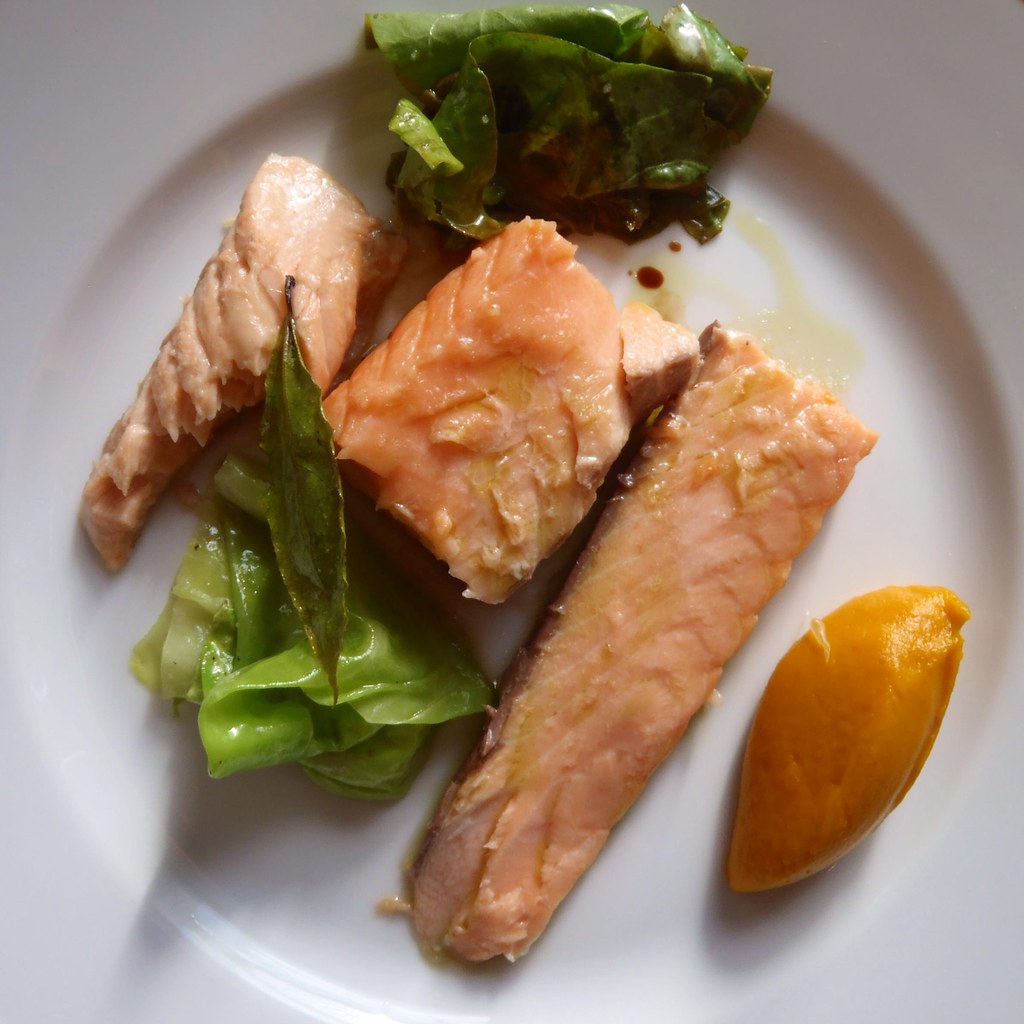 The technique of baking in a salt crust seals in the moisture and essentially allows the fish to steam in its own juices.  Because you remove as much salt as you can before plating the fish, it doesn’t get overly salty and is just seasoned perfectly.  Best of all, it makes for a really impressive main course at your next dinner party.


So when I was in Seattle a couple of weeks ago and found out that Copper River salmon was back in season, I knew I had to get one and try salt-baking at home.  I bought a whole fish from Pike Place Fish Co., had it packed in a 48 hour box, and hauled it all the way back home with me. 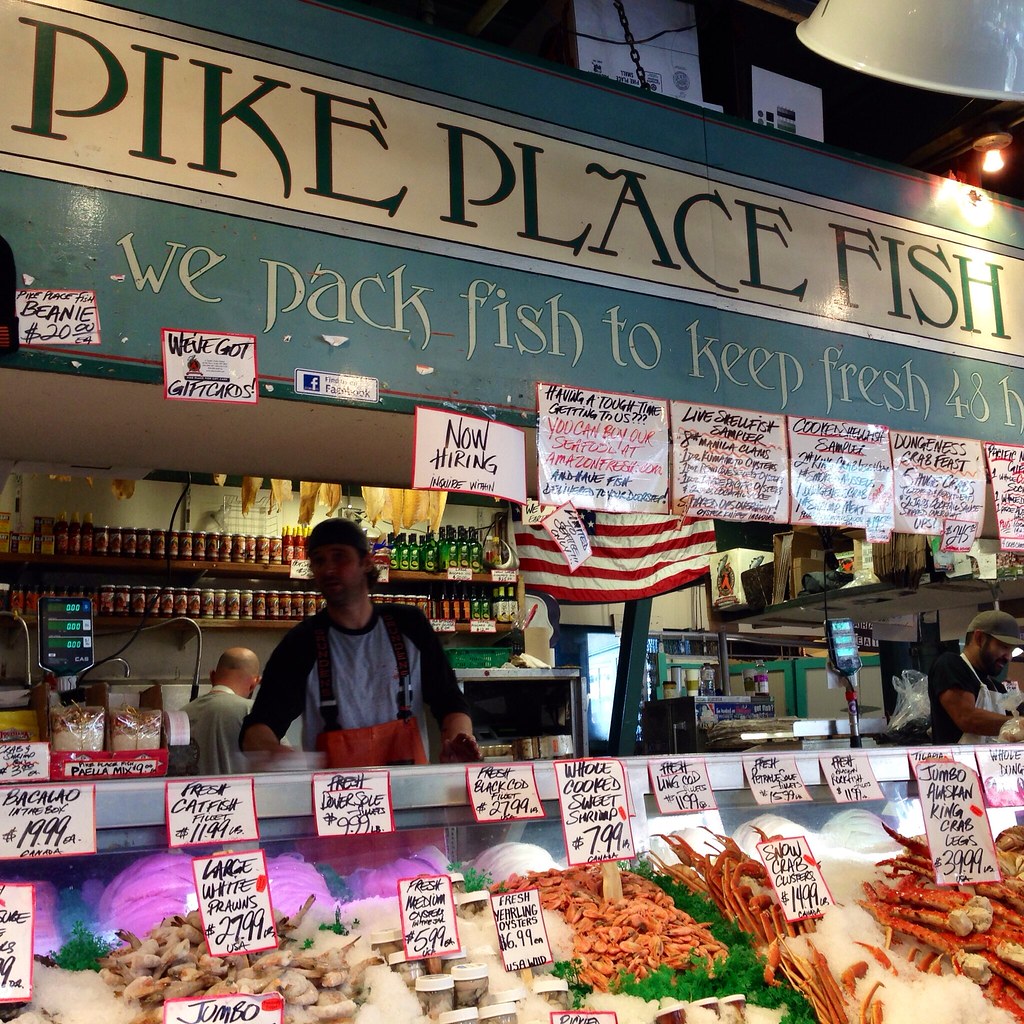 I was a little disappointed that the fish came headless, but in the long run, it was probably better for me since I was squeamish enough having to deal with the fins and all.  Thankfully it was already gutted and cleaned for me. 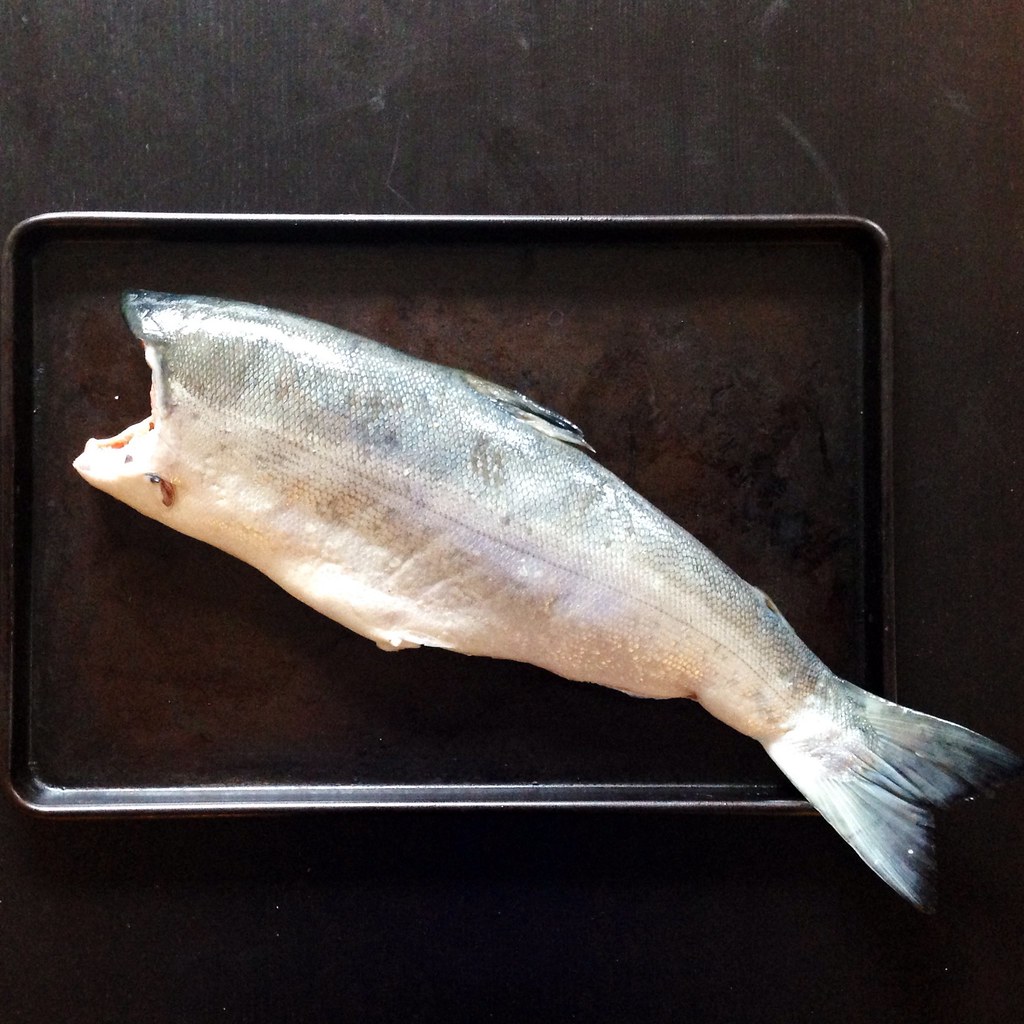 Regardless of whether you get a whole or headless fish, you definitely want to make sure the skin is left on so that there’s a barrier between the meat and the salt crust. 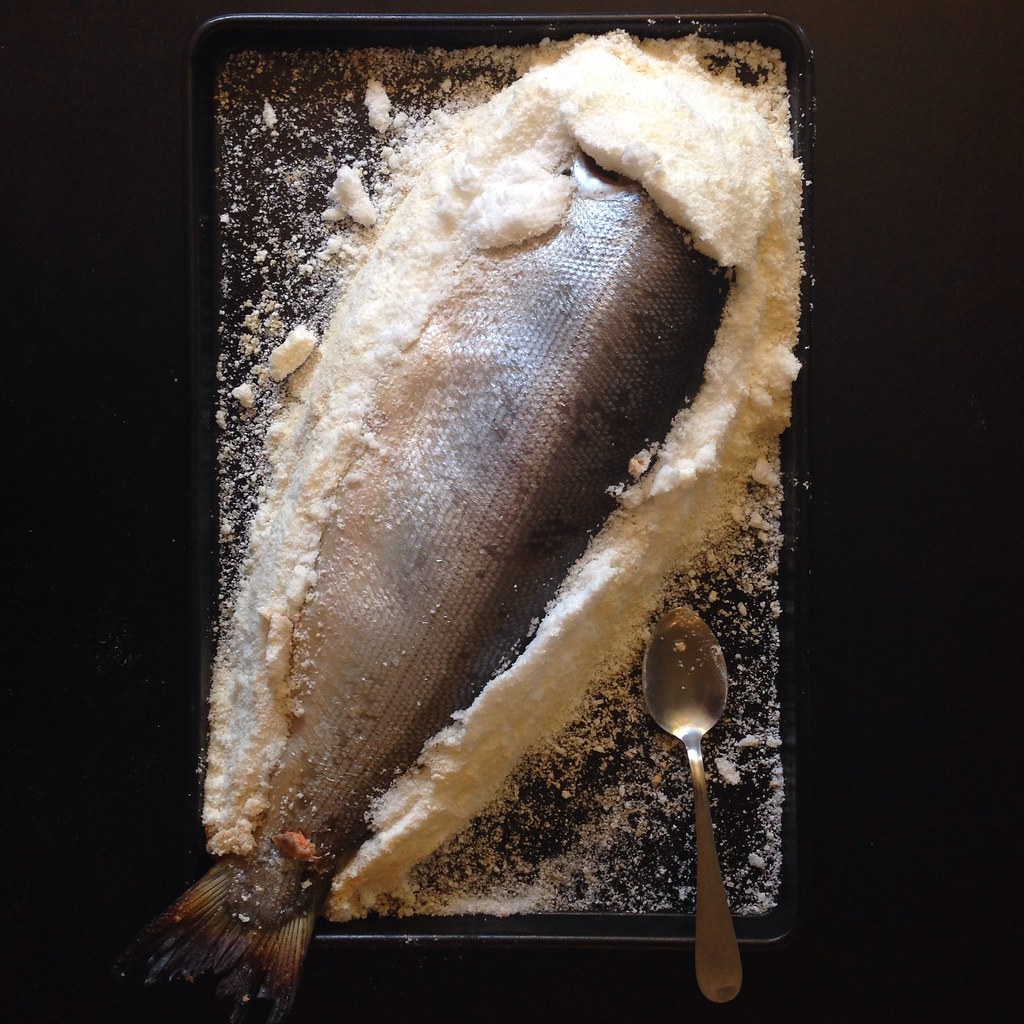 When the fish is done, the crust should be really hard; don’t be afraid to give it a couple of good whacks to break it open.  If you’re lucky like I was, the top of the crust will come off in one big piece.  I recommend doing this in front of your dinner guests, receiving yours oohs and ahs, and then bringing the fish back to the kitchen to plate. 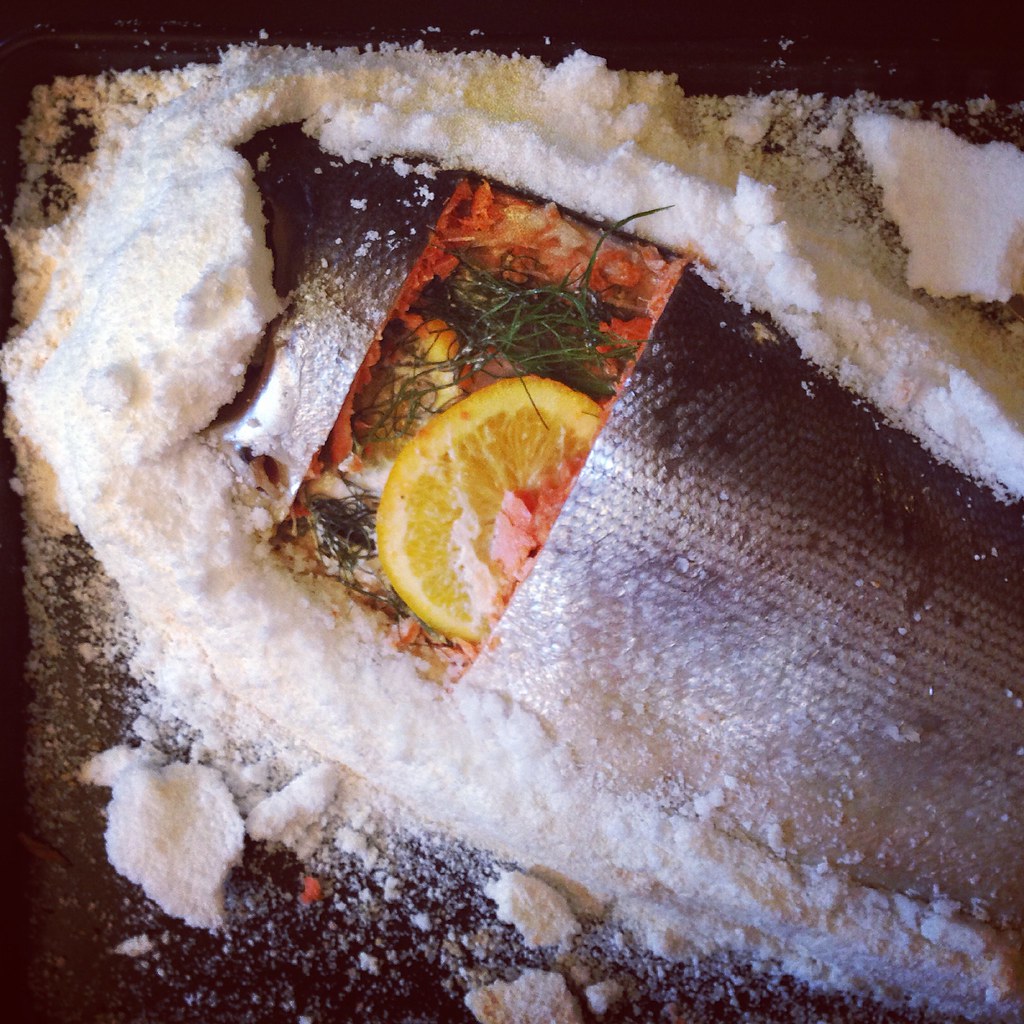 I chose to pair the fish with an orange fennel salad so that the crunch and acidity would complement the rich, tender salmon. 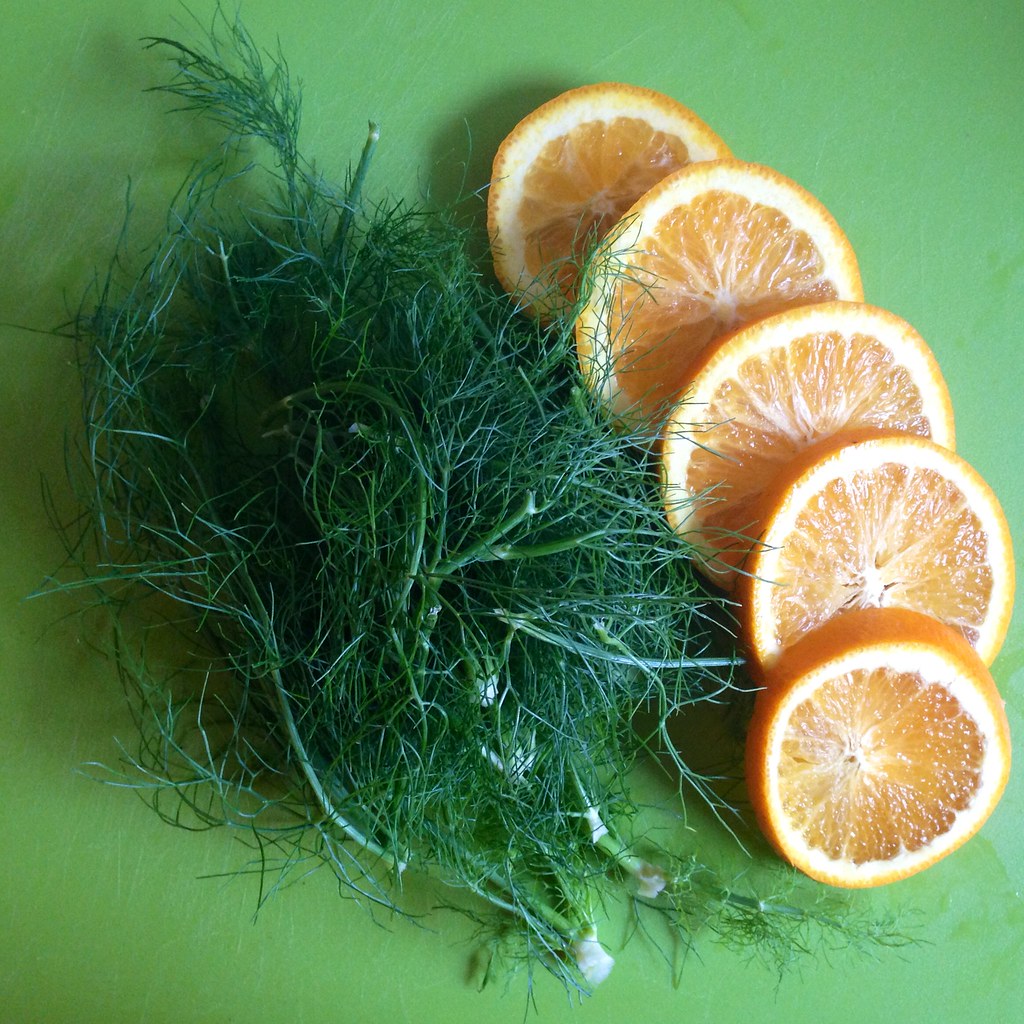 Slice one of the oranges and juice the other one.  Cut the feathery tops off of the fennel bulb and save. 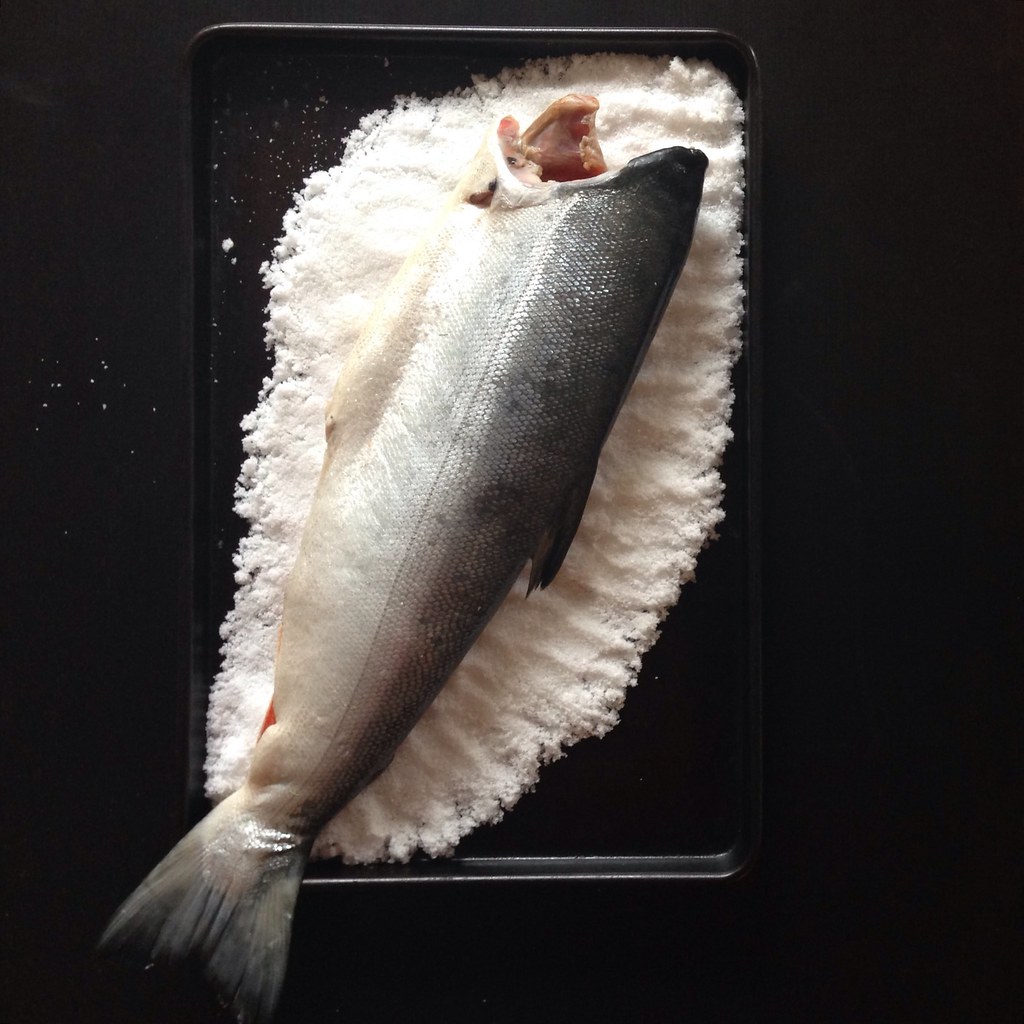 In a large bowl, mix the salt, egg whites, and a 1/4 cup of water.  It should feel like wet sand.  Add more water if needed, to get a consistency where you can pack the salt together.  Spread about half of the salt on a large sheet pan in the approximate shape of the fish. 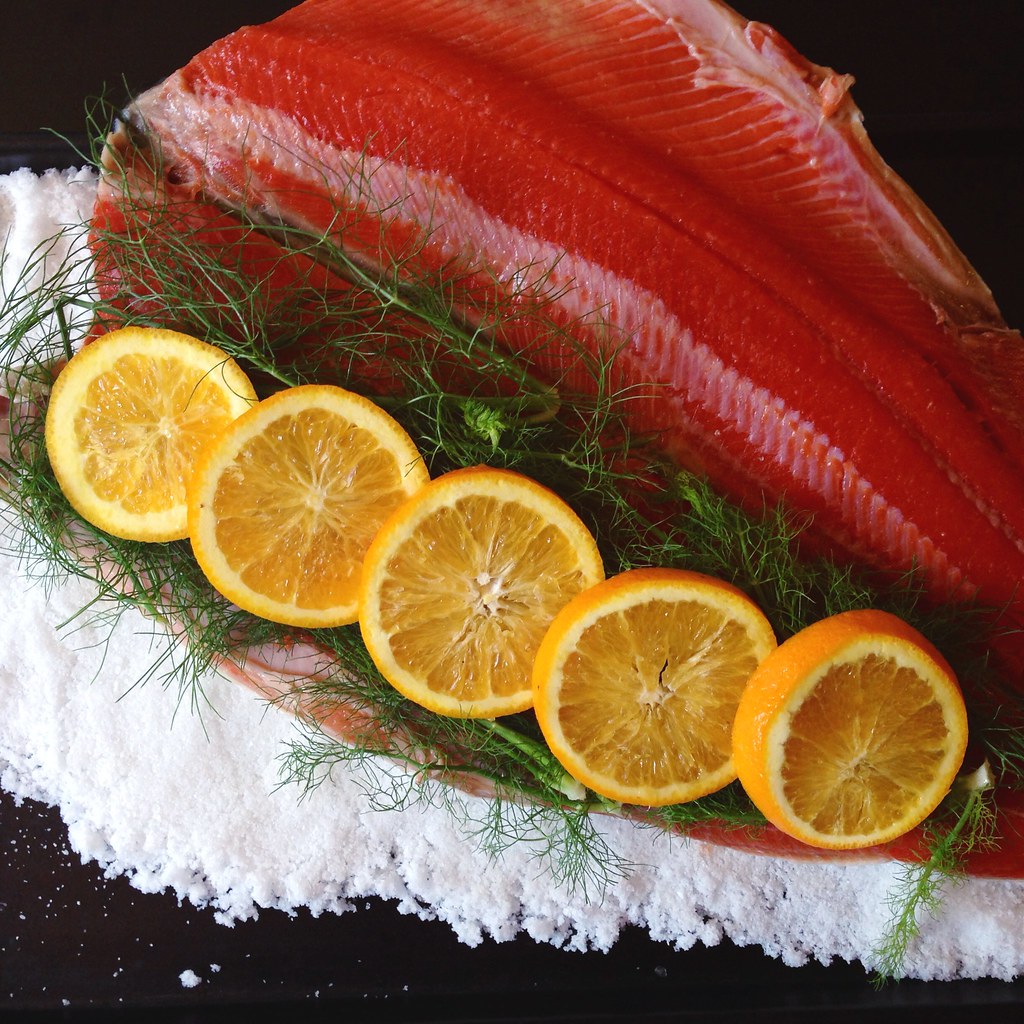 Remove the fins from the salmon and pat dry.  Stuff the fish with the orange slices and fennel tops.  Place on top of the salt.  Use the rest of the salt to cover the body of the fish entirely; you may leave the head and tail uncovered.  Pack the salt tightly to seal.  Bake in the oven for 25 minutes. 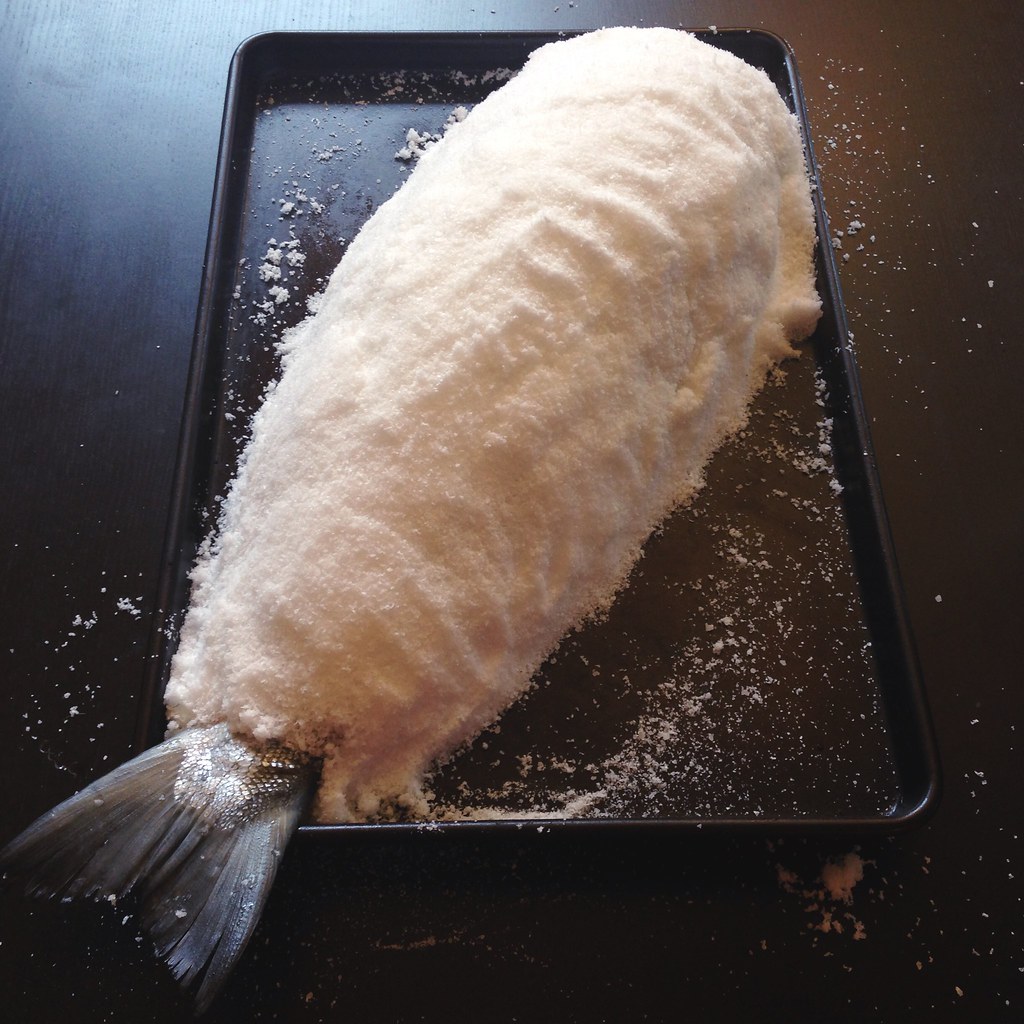 In the meantime, slice the fennel bulb in half, remove the core, and slice the rest thinly.  Toss with the orange juice, lemon juice, olive oil, and capers.  Salt and pepper to taste. 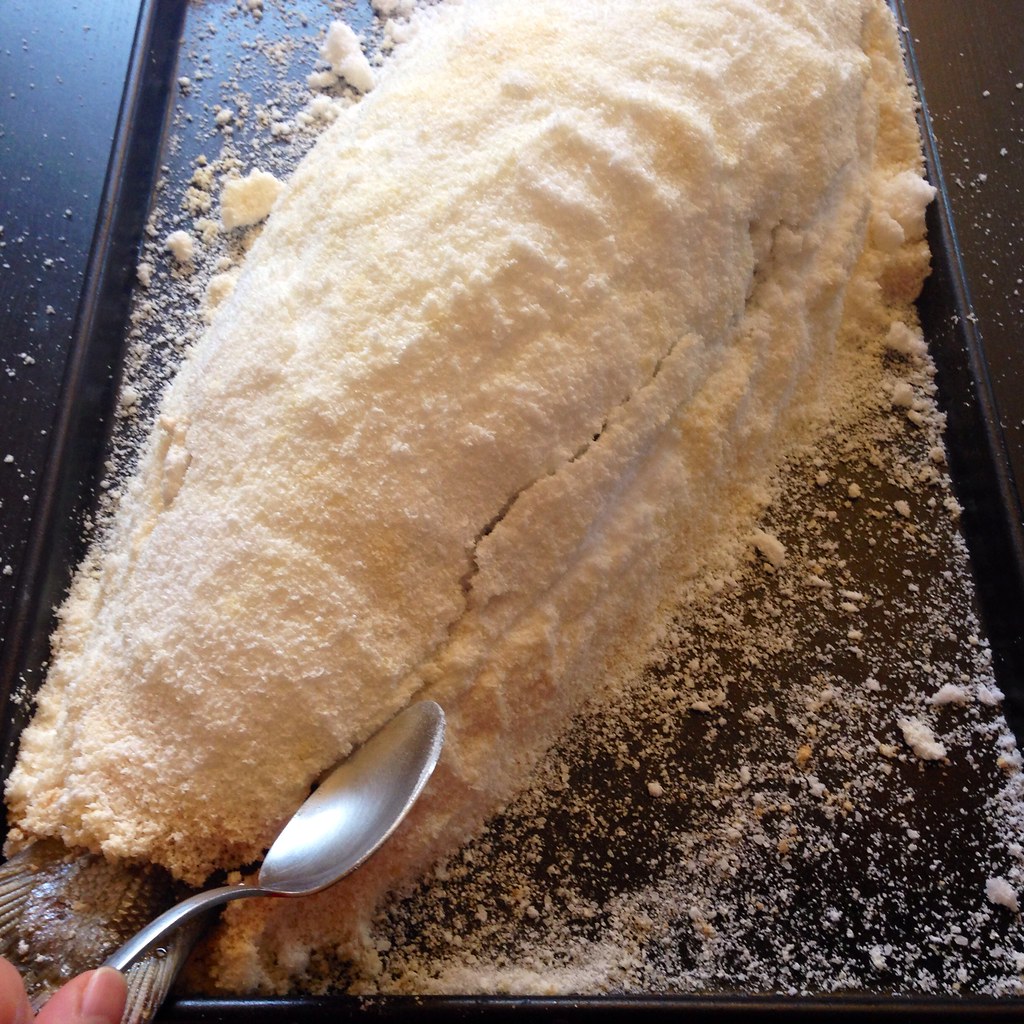 When the fish is done, allow to rest in the salt for 10 minutes.  Using a knife or spoon, tap the salt crust sharply to crack. 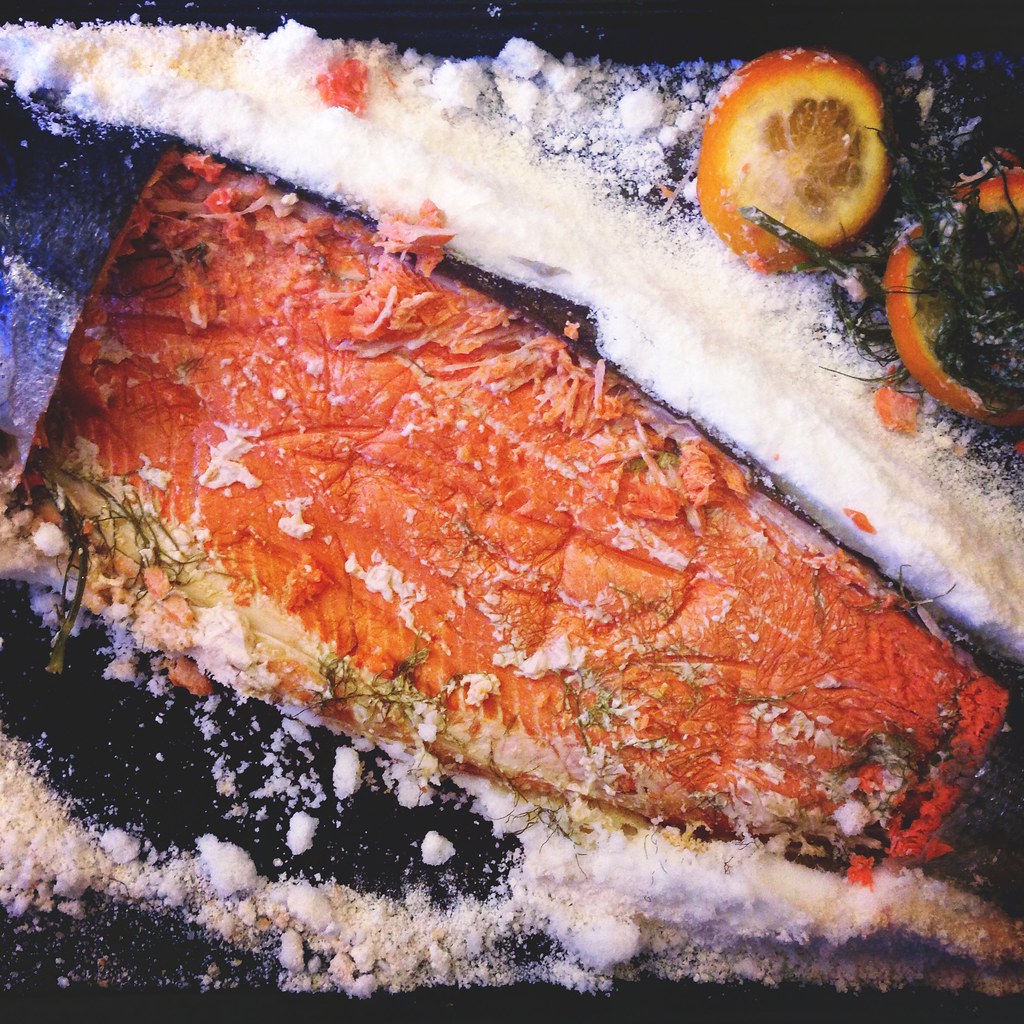 Remove the crust and brush off any remaining salt.  Portion out the top half of the fish.  Remove the bones, orange slices, and fennel tops, and portion out the bottom half. 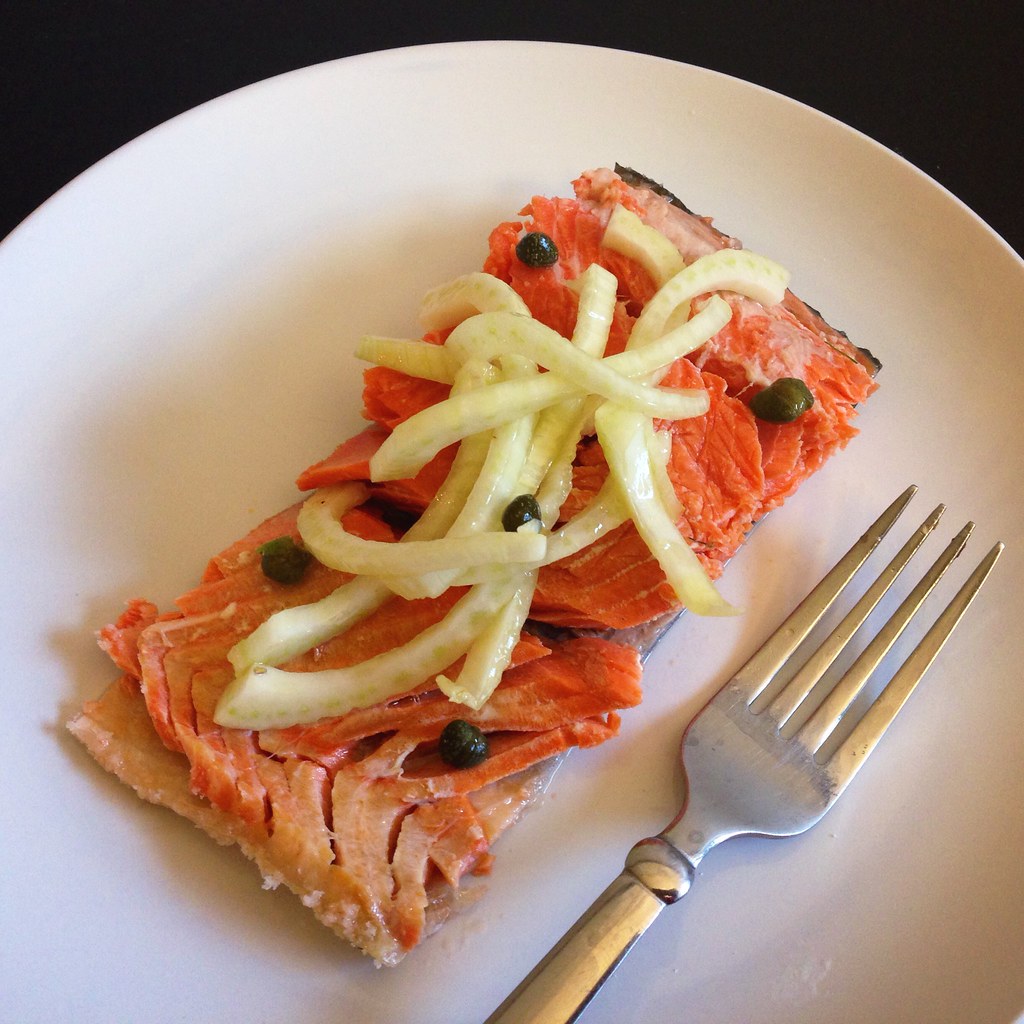 Serve the fillets with orange fennel salad on top.

Honestly, this is such a fool-proof way of cooking fish that I could’ve probably used regular farm-raised salmon and gotten similar results.  But just look at how red that Copper River salmon is!  I think the next time I get my hands on one, I want to try citrus curing it.