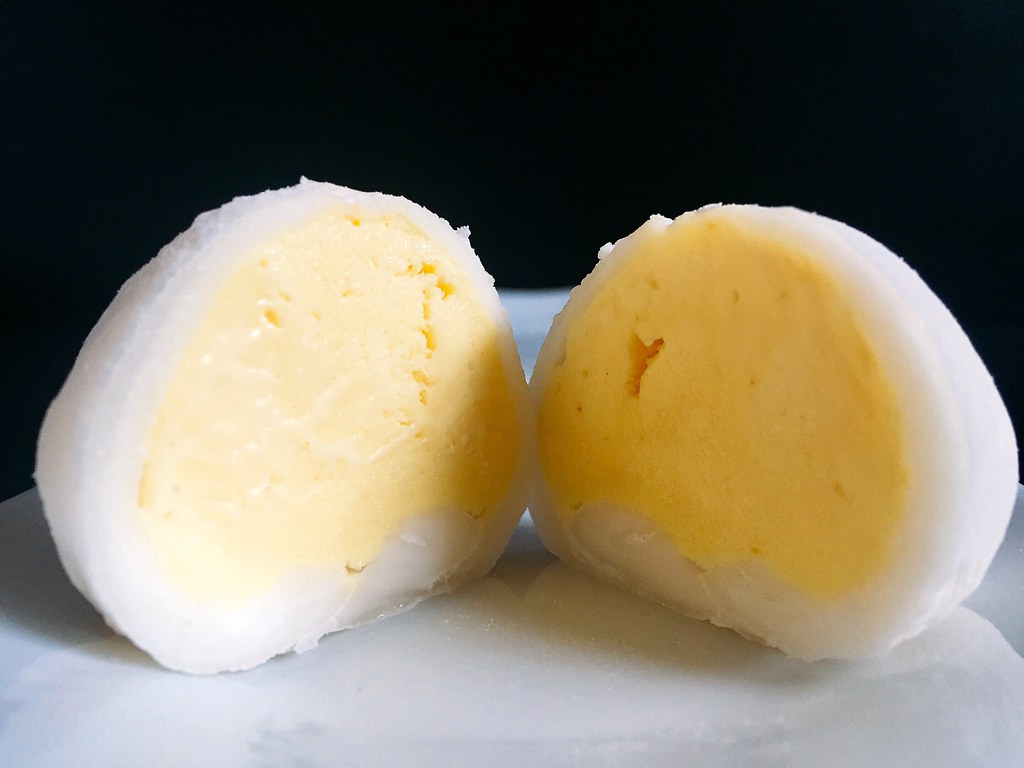 Earlier last year I discovered a new kind of steamed bun, the liu sha bao.  I think translated directly it means “quicksand bun” but it’s actually a lot better tasting that it sounds.  Inside is a molten filling made of salted egg yolk custard, and I could probably eat 5 of them in a row.  I tried making some a few weeks ago, but the result was just okay and not really worth all the work when I can just get the perfected bun at dim sum. 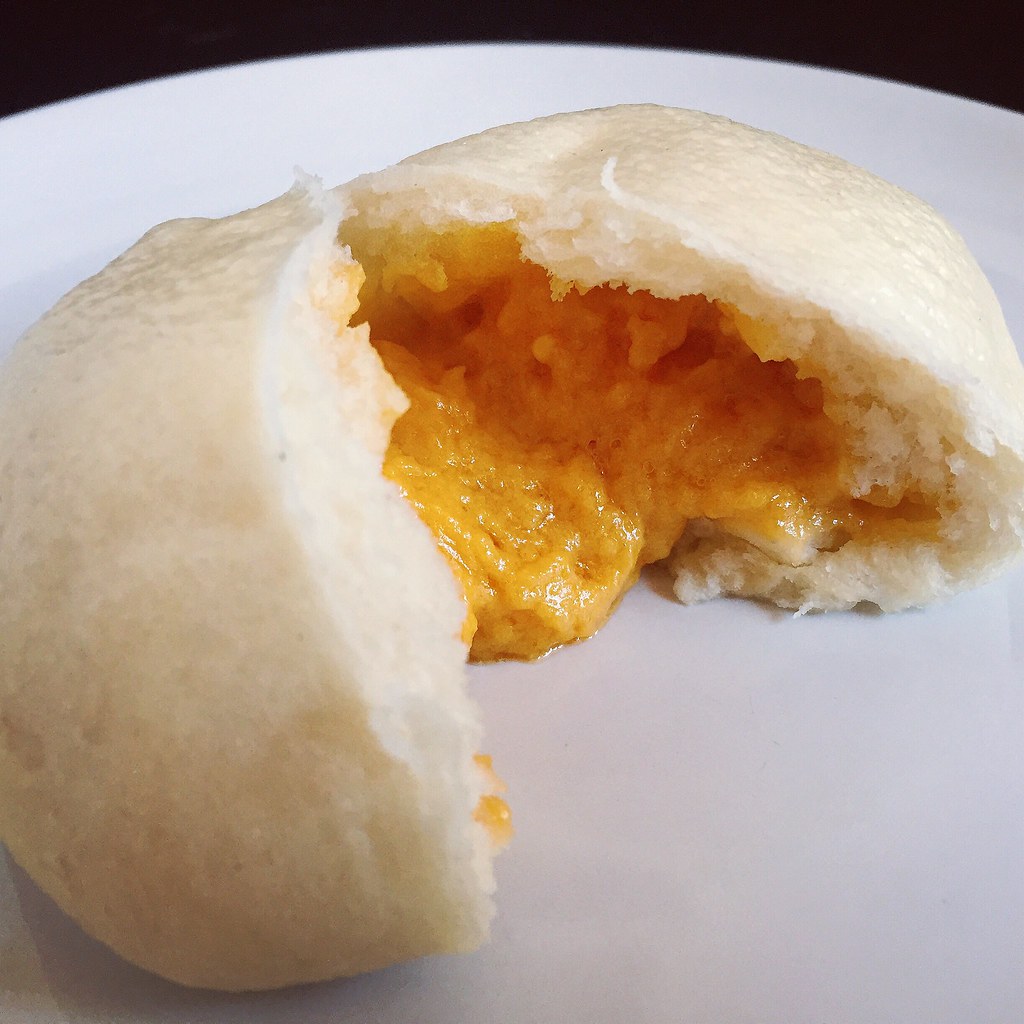 Because of that experiment I still had 3 cooked salted duck eggs sitting in my fridge, though, so I figured I’d try to make an ice cream out of them.  I followed the template of Jeni’s Salty Vanilla Frozen Custard, but I replaced 3 of the raw egg yolks with 3 cooked salted duck egg yolks, which you can find in the egg section of a Chinese grocery store.  I reduced the salt a little because the egg yolks were already salted and added a little bit of turmeric to increase the yellow coloring of the ice cream.  It still comes out a rather pale yellow, but I didn’t want to add any artificial food coloring. 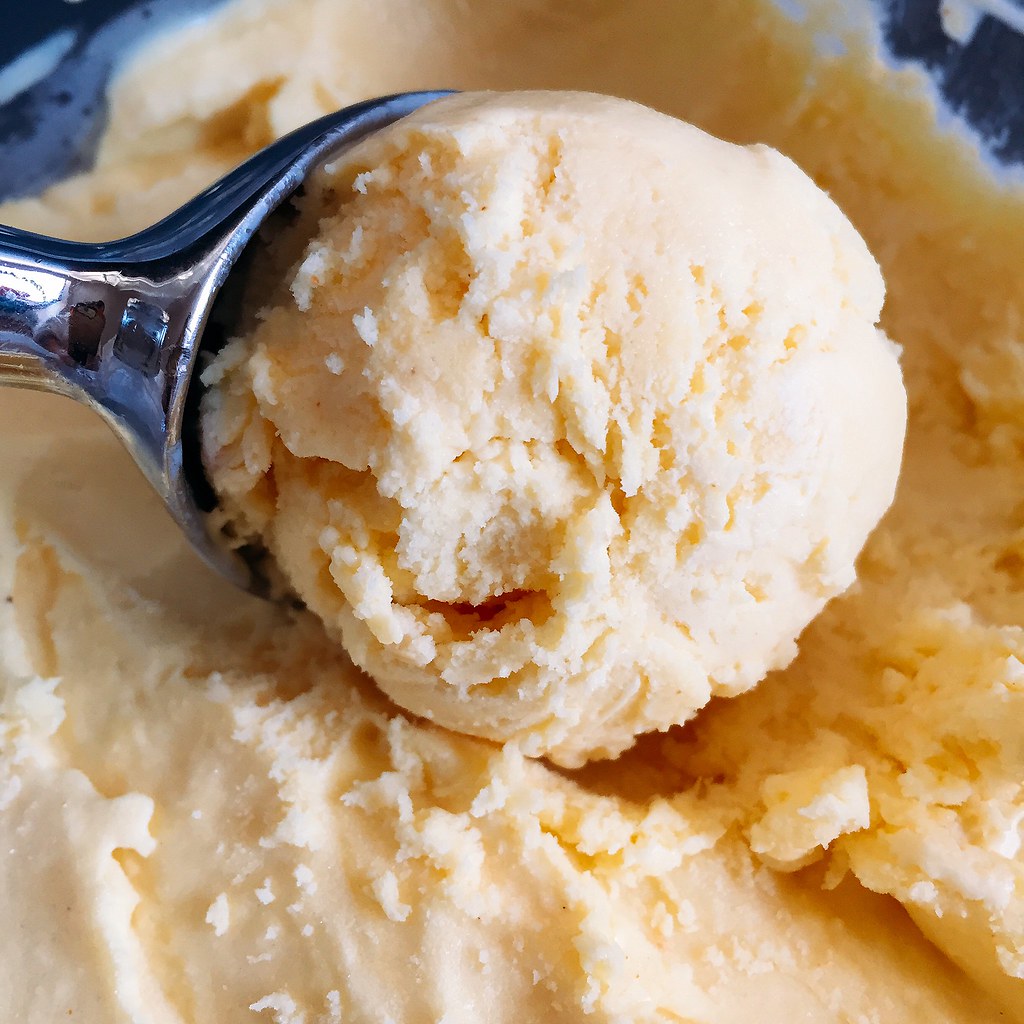 The resulting ice cream is incredibly rich, and tastes pretty much like the inside of a liu sha bao but in ice cream form.  So I decided to try making it into mochi ice cream to continue down that path.  I’ve tried making mochi ice cream before and that attempt was disastrous, to say the least, so this time I made sure to follow a trusted recipe.  I’m happy to say that the one from Just One Cookbook worked marvelously.  These salted egg yolk mochi ice creams are perfect because you only need a couple of bites of the ice cream, and the soft, chewy mochi helps keep the intense flavor from being too overwhelming.  Plus, I think they look super cute and remind me of liu sha bao! 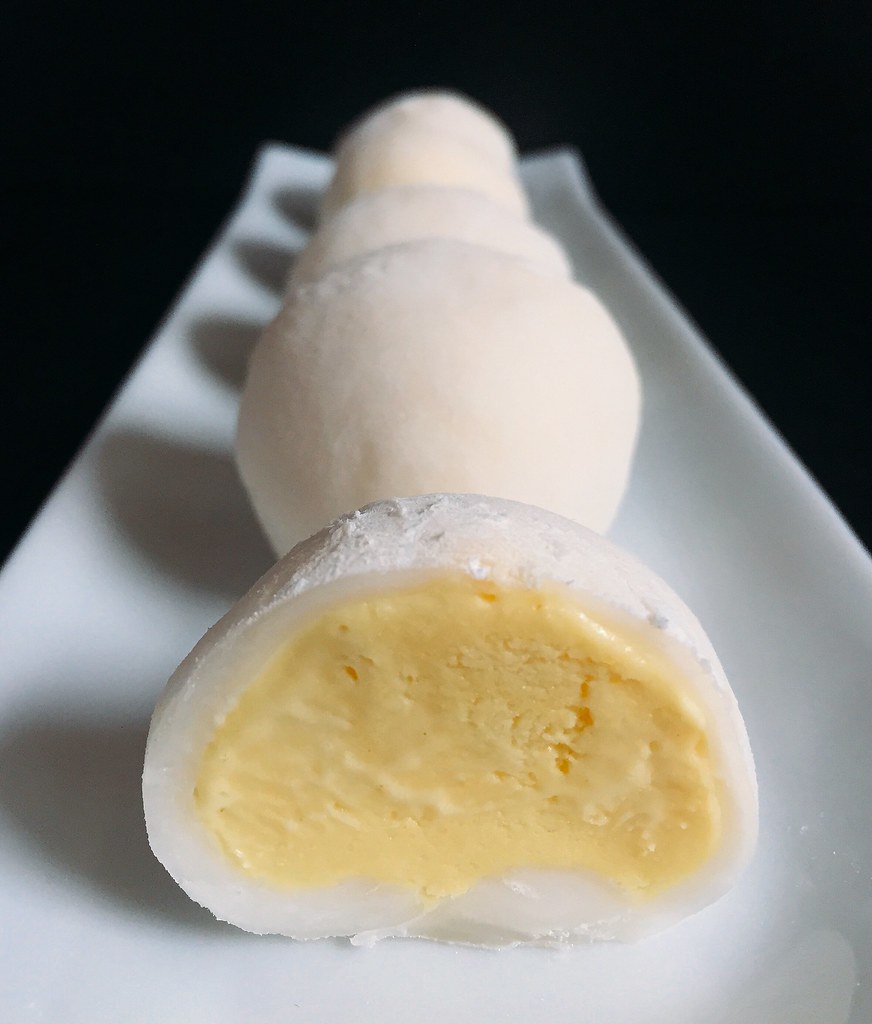 Carefully crack and peel the salted duck eggs, removing the whites until you are left with only the egg yolks.  Mash the egg yolks in a medium bowl, then add the cream cheese, salt, and turmeric and whisk until smooth.

Mix about 2 tablespoons of the milk, the raw egg yolks, and cornstarch in a small bowl and set aside.  Fill a large bowl with ice and water.

Combine the remaining milk, the cream, sugar, and corn syrup in a 4-quart saucepan, bring to a boil over medium-high heat, and boil for 4 minutes. Remove from the heat and gradually add about 2 cups of the hot milk mixture to the egg yolk mixture, one ladleful at a time, stirring well after each addition. Pour the mixture back into the saucepan and heat over medium heat, stirring constantly with a heatproof spatula, just until the mixture thickens. Remove from the heat and strain through a sieve if necessary.

Gradually whisk the hot milk mixture into the cream cheese mixture until smooth. Pour the mixture into a 1-gallon Ziploc freezer bag and submerge the sealed bag in the ice bath. Let stand, adding more ice as necessary, until cold, about 30 minutes.

Remove the frozen canister from the freezer, assemble your ice cream machine, and turn it on. Pour the custard base into the canister and spin until thick and creamy.

Pack the custard into a storage container. Press a sheet of parchment directly against the surface and seal with an airtight lid. Freeze in the coldest part of your freezer until firm, at least 4 hours. 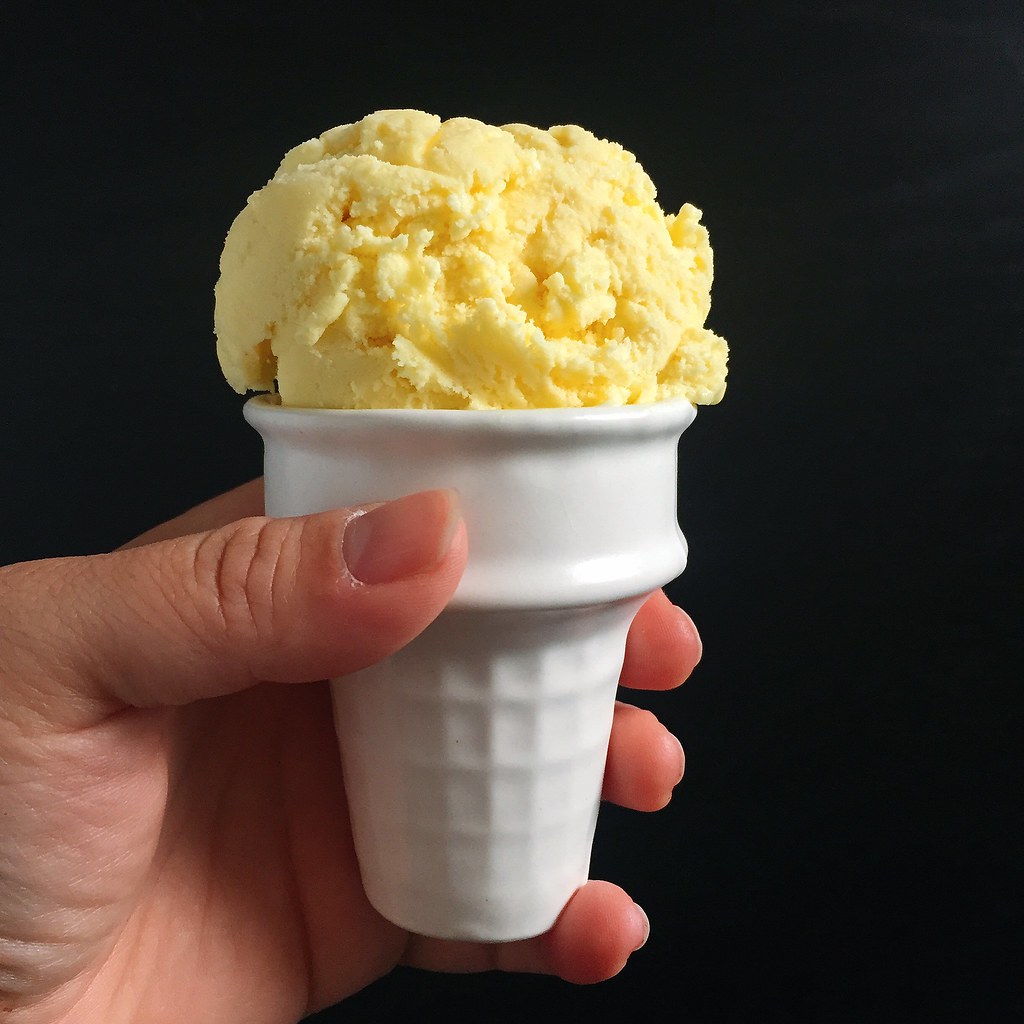 Place a cupcake pan in the freezer to chill.  Use a cookie dough scooper to scoop 6-8 balls of ice cream.  Place each ball on an aluminum cupcake liner in the cupcake pan and freeze for several hours until hard.

Use a 3 1/2″ cookie cutter to cut the mochi into circles.  I was able to easily cut out 6 circles, and if you want, you can reroll the scraps to make more circles, just make sure to redust with cornstarch.

When ready to eat, let sit at room temperature for a few minutes so that the mochi can soften. 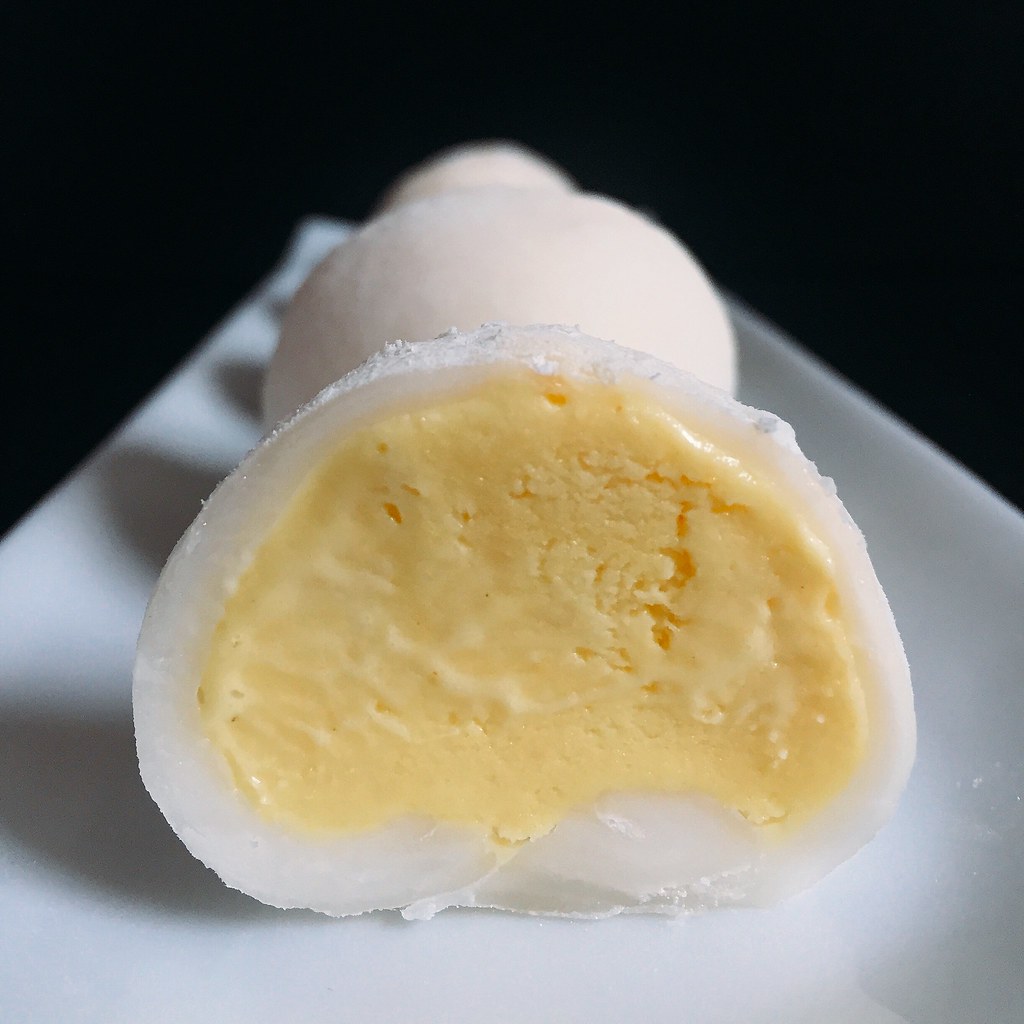