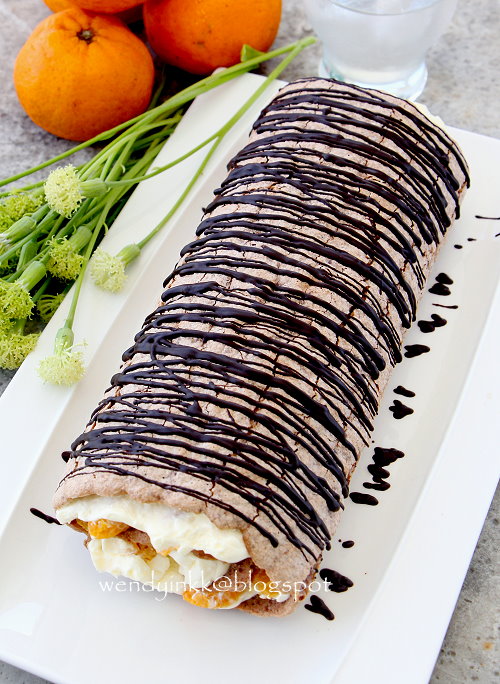 I tried baking dacquoise once. It came out so beautiful, and so I let it cool down for a few hours, thinking to attend to it, later. But it sweated and melted in the humidity. Sigh!

I didn’t realise that the cake base for this, is actually almost a dacquoise, yes just almost, or maybe it is still considered as one. It is baked much quicker, only 15 minutes rather than 1 hour. It was only after I ate it, I realised what type of cake did I bake. Hahahah. 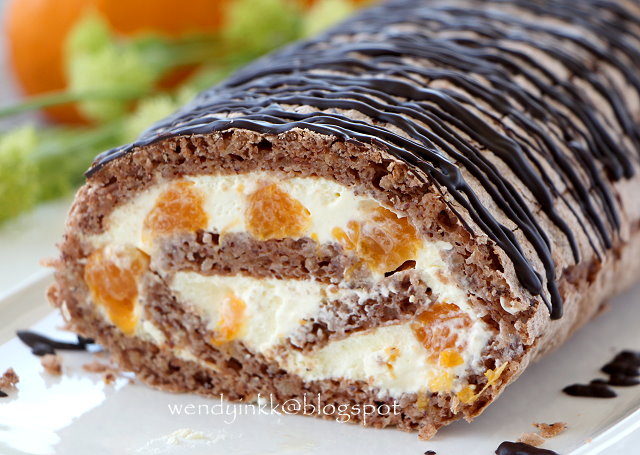 I did some mistakes with this cake. I didn’t beat the whites as much as I should, could be underbeaten. And I also itchy itchy put in vanilla extract, of which I see the batter losing its stiffness right before my eyes. Maybe I should put in vanillin instead. But I am also not sure, if it’s because of me, cutting away 33% of the sugar be the culprit? Hmmm….. I saw another recipe with similar ratios as mine being piped nicely…. So I think it could be the vanilla or my beating problems.

And I’m still very much a novice with rolled cakes. There’s a phobia for it, worrying it doesn’t stay rolled up.

How should I describe this cake?
I am in love with this. 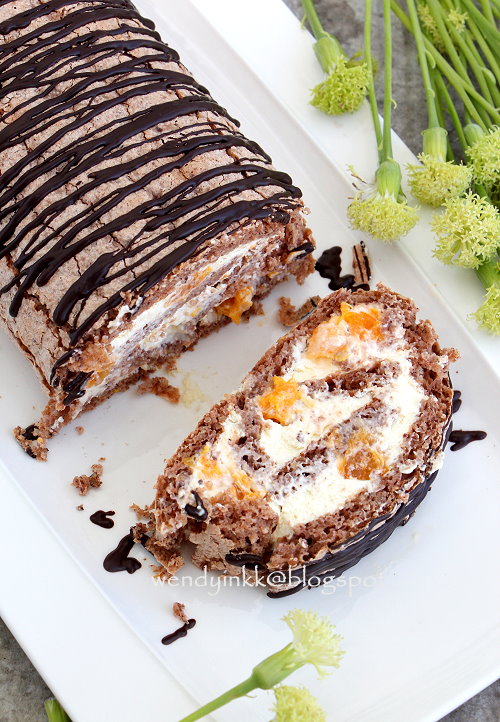 I am usually in love with tortes, flourless or cake with part of their flour replaced with powdered nuts. But this one gave me multi textural experience. The cake itself… was tender on the inside.. but it had that crisp exterior, that meringuey crust. So delicious! And the soft creamy filling with mandarins that lend a fresh taste to the roll. And finally, that drizzling of melted chocolate over that solidifies into crunchy strips of chocolate was an awesome addition that should NOT be optional. My favourite is absolutely the crust of the cake…

To the person who created this, awesome genius!
And that person is Ingvar Strid, born 1926 in Vetlanda, Sweden. Not Budapest, Hungary 🙂
Read more about this cake here

1. Preheat oven at 200C. Line a large baking tray with non stick baking paper.
2. Sift flour, cocoa powder and cornstarch together. Mix with hazelnuts. Set aside.
3. Beat egg whites with salt until soft peaks, then gradually beat in sugar until stiff peaks.
4. Put in the hazelnut mixture and vanilla extract and fold.
5. Pipe the batter into the lined tray. Bake on the lower third of the oven for 12 to 15 minutes.
6. While waiting for the dacquoise the cool, put water into a heat proof bowl and sprinkle gelatin over. Let it sit for 5 minutes and then melt it either in the ‘still warm’ oven or double boil or microwave.
7. Beat whipping cream in a cold bowl until streaks form, then add in sugar and beat until it can hold some shape. Pour in the melted gelatin and beat until smooth. Chill until time of use.
8. Fill up the daquoise like the pictures below. Roll up and wrap with paper to hold still the roll.
9. Chill for a few hours, drizzle with melted dark chocolate, then slice to serve. 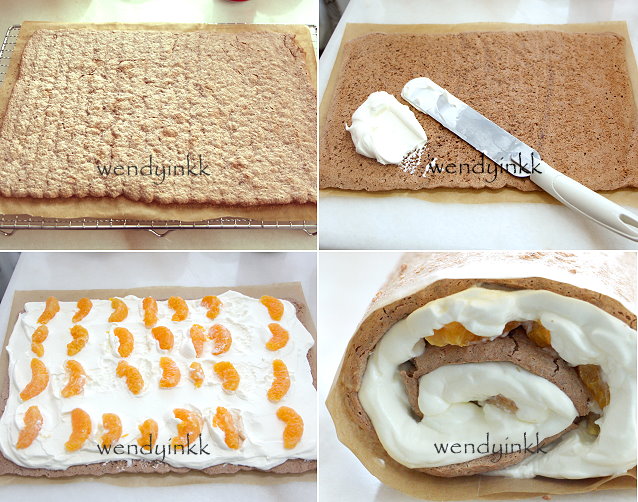