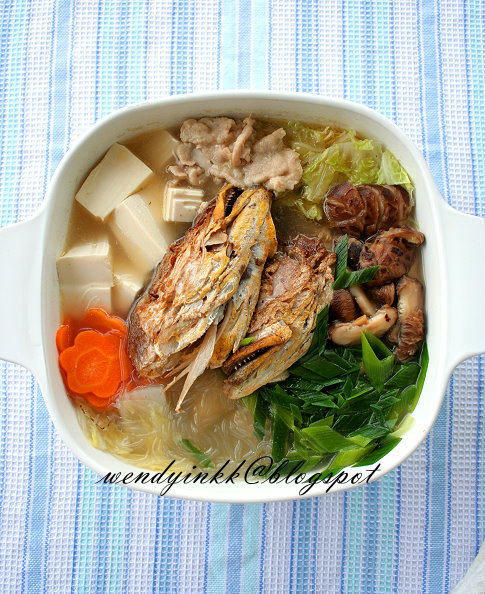 My mom shoved me this fish head. Simply because she bought one whole big fish, had the fishmonger to cut them into steaks and she didn’t know what to do with the head.

Well, haha, it’s not hard for me to find a way to cook it. I just flipped the cookbook she passed to me. There it is, almost at the end of this book is the “Fish head casserole”. 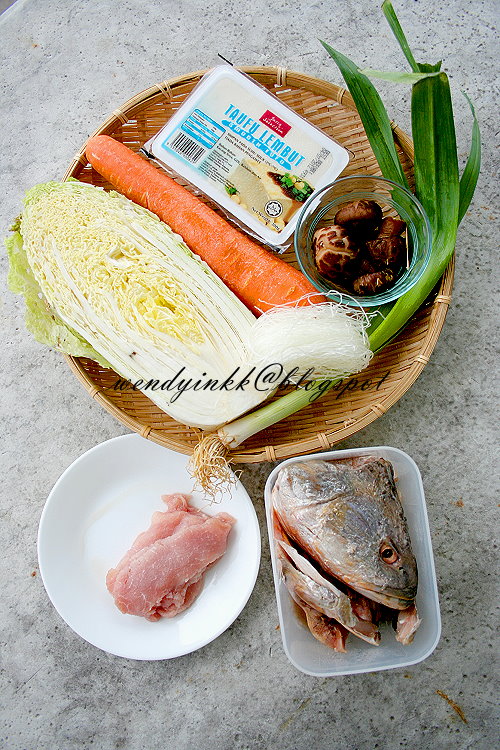 Actually, if it’s not because of me tasting this dish at my friend Siew Ping’s house back when I was 14 or 15, I wouldn’t even take a second look at this dish. It was actually a hearty delicious dish. I remember at Siew Ping’s house, that was all for lunch that day. Everybody drowned their rice with this casserole.

And after eating at her house a few times, I realized her mom actually cooked from this cookbook that my mom has too. Well, my mom never cooked from it, hahaha! But because I have been flipping this cookbook since I was 4 or 5, the dishes that Mrs Loh made really looked familiar. LOL.

I cooked this and my family loved it too. Both my girls loved the broth. We had this casserole with waxed meat and rice and it became a very satisfying meal. 1. Marinate fish head with 1 Tbsp shaoxing wine, 1 tsp light soy sauce and 1 tsp rice vinegar.
2. Marinate pork loin slices with 1 tsp light soy sauce and 1 heaped tsp corn starch.
3. Cut napa cabbage, leave some soft top leafy pieces(10-15%) and set it aside. Put the rest of the harder parts in another container.
4. Cut leeks into slanting slices, separate the white and green parts.
5. Slice carrots and mushrooms and soak the glass noodle.
6. In a wok, heat up and put in 1 Tbsp of oil. Saute white part of leek until very fragrant. Put in napa cabbage (the bigger portion). Stir fry it for a while. (I could smell the cabbage smelling good). Transfer everything to a large claypot (I used Corningware 3L). Put in water about 60% full and let it come to a boil, reduce to a simmer for 30 minutes.
7. Meanwhile, pan fry the fish head until golden in some oil. Drain and dish up.
8. When the 30 mins is up, or the napa cabbage looks cooked enough, add in stock powder and adjust saltiness with salt. Add some water if it’s not enough. (don’t worry if it’s not flavourful enough, the good stuff will go into it later)
9. Put fish head in the middle of the pot, and arrange the rest of the ingredients around the head. Bring to a boil and let it simmer for 5 minutes.
10. Bring it to the table and serve.

*Types of fish head that can be used here: Salmon, Grouper, Snapper or any other fleshy marine fish heads. 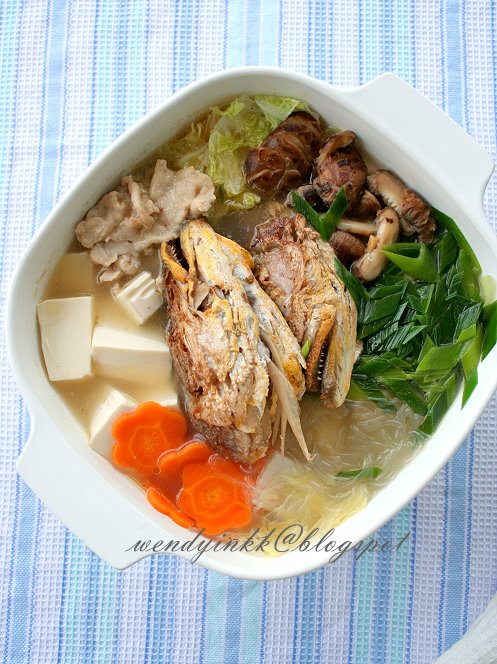