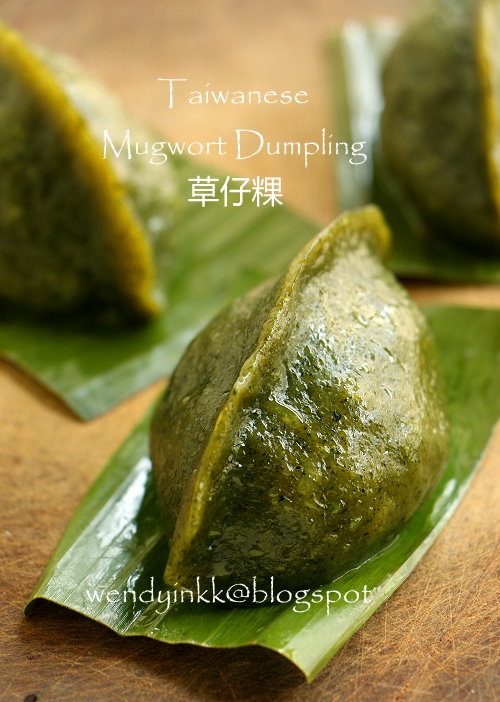 Chinese Mugwort 艾草 (pronounced “ngai chou” in Cantonese) is a household herb that is usually used in omelettes and soups. It can also be used to add colour and flavour to dumplings. This herb is said to be good for women and to dispel wind from the body

This dumpling is also found in China and Malaysia as well. In China, it can go with many names like 清明粑，清明糍，艾草粑粑 and quite a few more that I can’t remember. There are some differences between the Taiwanese version and the rest. 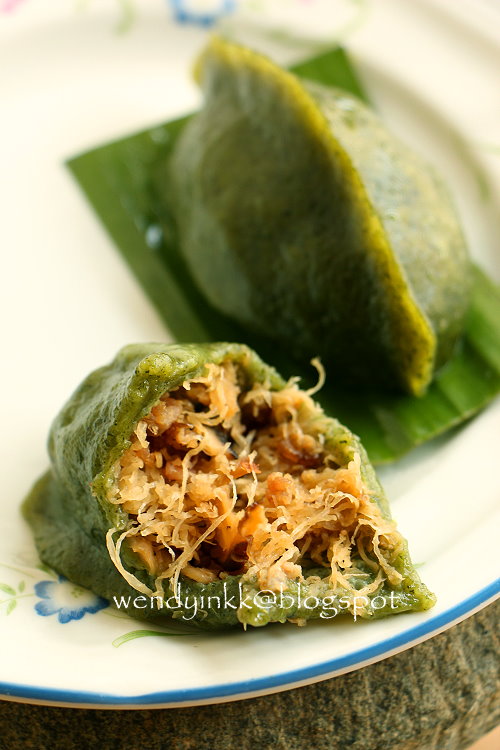 The ones in Taiwan, uses dried radish shreds as filling, whereas in other places, their savoury version uses preserved radish. Besides the savoury version, you can also make it sweet with sweetened red beans.

I don’t have mugwort plant at home. I got it from my mother’s neighbour. Sometimes, it’s sold in markets by some small scale market vendors, harvested from home grown gardens. It is not a commercial crop in our country.

Initially I thought mugwort is bitter…. but it wasn’t. I thought it will have a strong smell…but it was mild, so so mild. There was more dough than filling, and so I steamed the balance, unfilled. I think I should add more sugar to the balance of dough, as the unfilled ones turned out not sweet at all.

I made this at mom’s and she likes it. She shared around with her friends.

This post is quite long… as I had to make a few components that are part of the ingredients.
Sometimes, it’s really not a choice because, not everything can be bought here

1. Peel radish and finely shred it. Place the shreds in a glass or stainless steel bowl.
2. Put in salt and mix it around. Let it sit for 5 to 10 minutes, until you see a lot of liquid in the bowl.
3. Squeeze the radish shreds dry. Spread them onto a lined tray, and sun dry for a few hours or until they are dry.
*I flipped them every hour to make sure the drying is even. 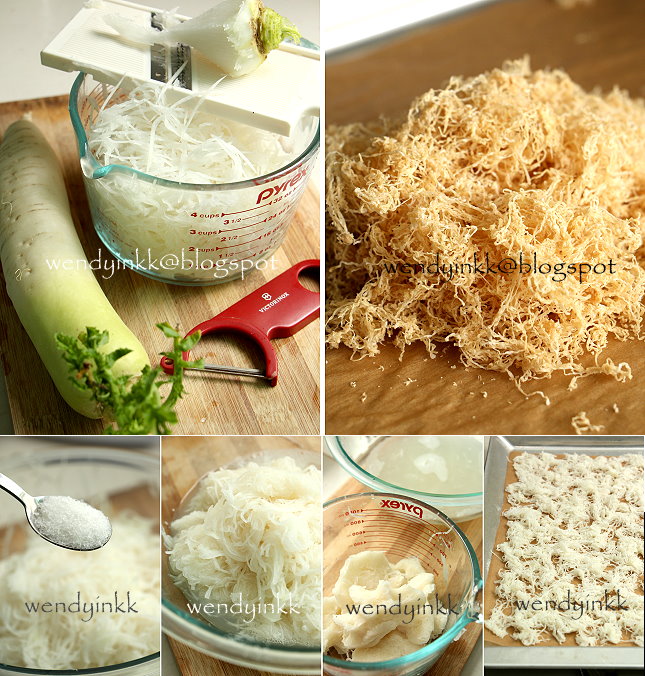 1. Blanch the leaves in boiling water and put them into a basin of tap water. Wash them by scrunching them and squeeze them dry. Cut them smaller.
2. In a saucepan, add in 1 cup water , and then bring to boil. Add in the cut up leaves, and then alkaline water/baking soda and simmer for 2 minutes or until the leaves feel softer, like cooked vegetables.
3. Let them cool down and puree the leaves together with the liquid until fine.
4. Keep until time of use. (I made it a day ahead and kept it in the fridge) 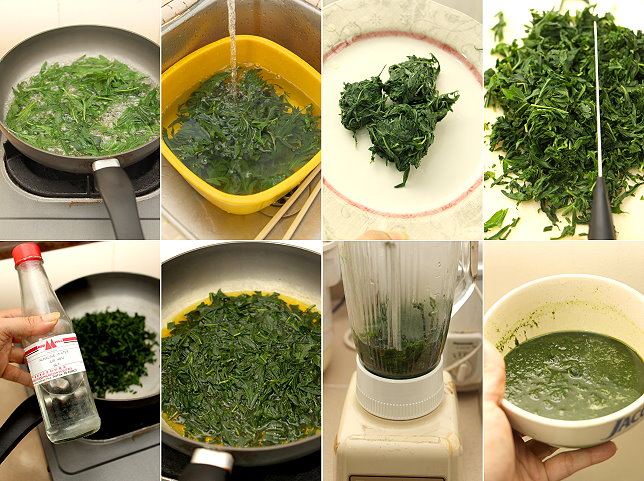 1. Soak dried radish shreds until softened. Squeeze dry. Snip them shorter.
2. Put 3 Tbsp oil into wok/pan and saute shallots until golden. Dish up and set aside.
3. In the remaining oil, saute minced pork until cooked, then add in mushrooms and saute for a while.
4. Add in radish shreds and mix it around. Add in seasonings and cook  until the filling is flossy and the radish shreds are evenly seasoned.
5. Return shallots to the pan and mix it around.
6. Divide the fillings into 10 or 12 portions. Shape them into preferred shapes (round or oblong), place onto non stick baking paper and freeze them as you prepare the dumpling skin’s dough.

1. Prepare sticky dough. Combine both ingredients and knead into a smooth ball of dough. Press it flat and boil it in boiling water for 3to 4 minutes.
2. Meanwhile, in a mixing bowl, mix all the dry ingredients for main dough together.
3. When the sticky dough is cooked, put it into the main dough, snip it smaller (into 4) and put in oil. Add half the mugwort puree and knead. Add more puree as needed to form a pliable dough. If you won’t want the dumpling to look too dark, add more water instead of mugwort puree. 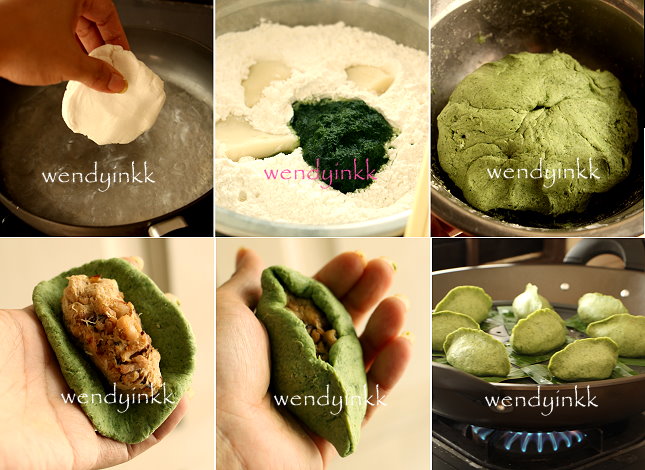 All the dough
All the fillings
Banana leaves or Alpinia Zerumbet leaves for lining
Oil, as needed.

1. Weigh dough, around 40gm each, according to the amount of filling formed. Roll the weighed dough round. Any extra dough can be formed plain or filled with red beans.
2. Lightly oil hands and flatted each dough ball and place a piece of cold filling onto the dough.
3. Seal it and form it according to your preference.
4. Place it onto a piece of leaf. Repeat until wrapping is completed. Oil the formed dumplings if you think it looks dry.
5. Steam the dumplings on MEDIUM heat for 15 minutes.