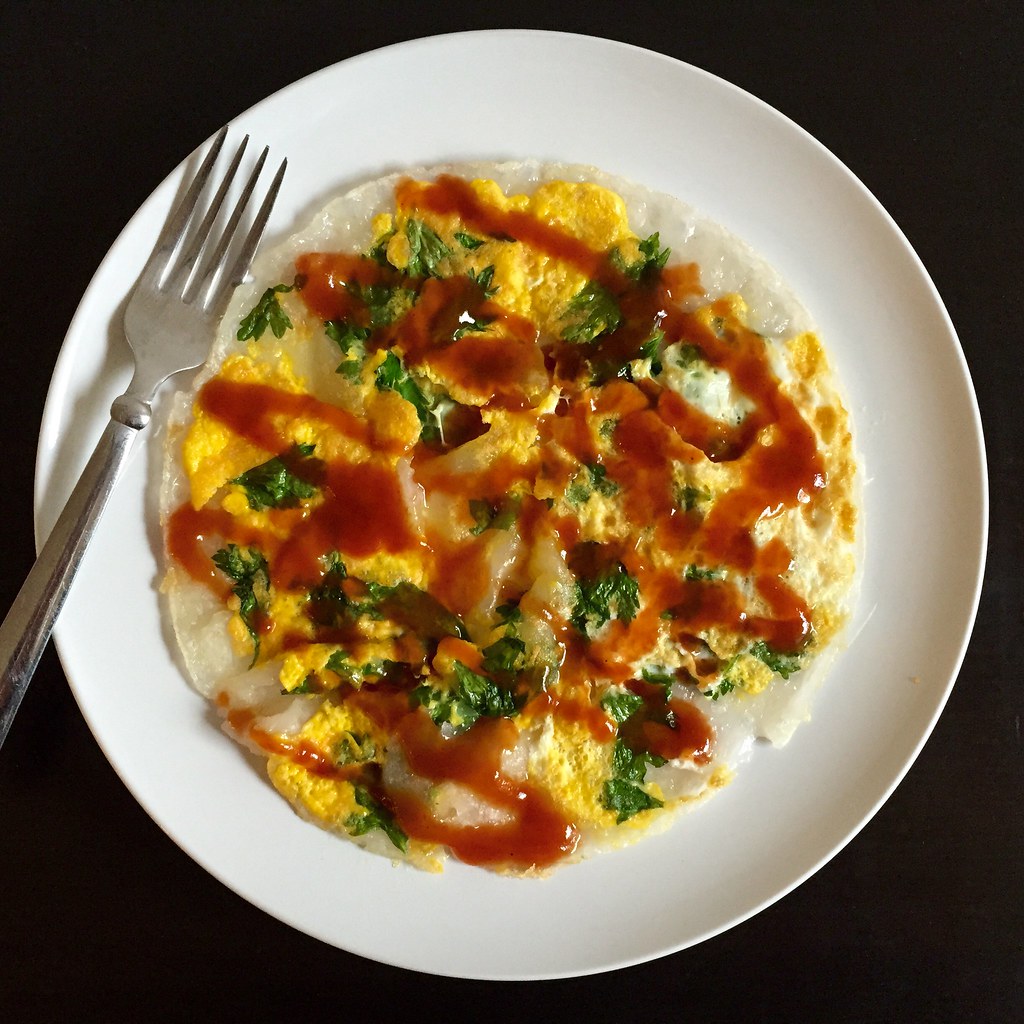 I know, I know, it’s almost blasphemy to make 蚵仔煎 (pronounced “uh-ah-jian” in Taiwanese) without the oysters, but honestly, the oysters are my least favorite part of this dish.  I love the blend of crispy and gelatinous textures from the sweet potato flour batter, the fried egg that holds it all together, and the tangy red sauce that smothers it all, but the chewy, cooked oysters just get in my way.


For this recipe I combined the omelet from Tiny Urban Kitchen and the red sauce from Serious Eats.  The sauce was so spot on that when I took my first bite, I totally thought I tasted an oyster in there and was pleasantly confused.  If you want to make this with oysters, use 3-4 small, shucked oysters for each pancake and either add them to the hot pan before the batter for a minute or two or mix them in with the batter before cooking, depending on how cooked you want them.

As a word of caution, the batter made from sweet potato flour (which you should be able to find at an Asian grocery store) will be one of the stickiest things you’ve ever worked with once it starts cooking.  Make sure you use a non-stick or thoroughly seasoned pan, and even then, I would suggest using a generous amount of oil to make sure it doesn’t stick. 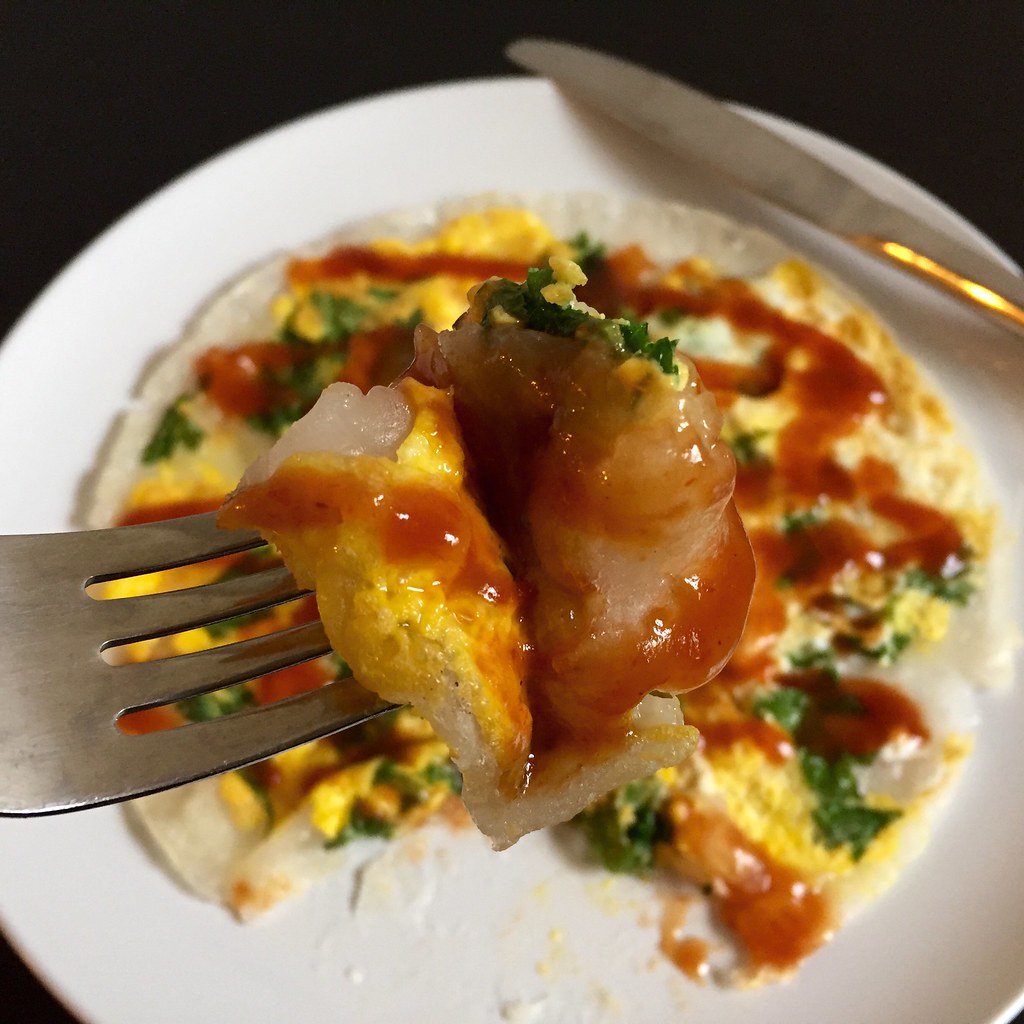 To make the sauce, combine the ketchup, vinegar, sugar, soy sauce, and miso in a small saucepan over medium heat.  Simmer for a couple of minutes until the sugar dissolves.

Mix the cornstarch and water to make a slurry and add to the saucepan.  Stir until thickened, another couple of minutes, and then cool to room temperature.


To make the omelet, mix the sweet potato flour, salt, white pepper, and water into a smooth batter.  Heat a non-stick or thoroughly seasoned pan over high heat.  Add enough oil to cover the bottom of the pan generously, not enough to deep fry but enough that there is a visible layer of oil all over.


Pour the batter into the pan, and lower the heat to medium.  Once the top of the batter is set, add the leaves, continue to cook for another minute, and then add the egg.  Use a spatula to start testing the edge of the omelet to see if the bottom is cooked and releasing from the pan.  When the bottom has released and the egg is mostly set, flip the omelet over and turn off the heat.  The residual heat from the pan should be enough to finish cooking the egg.


Invert the omelet onto a plate and drizzle a generous amount of red sauce on top.  Serve hot. 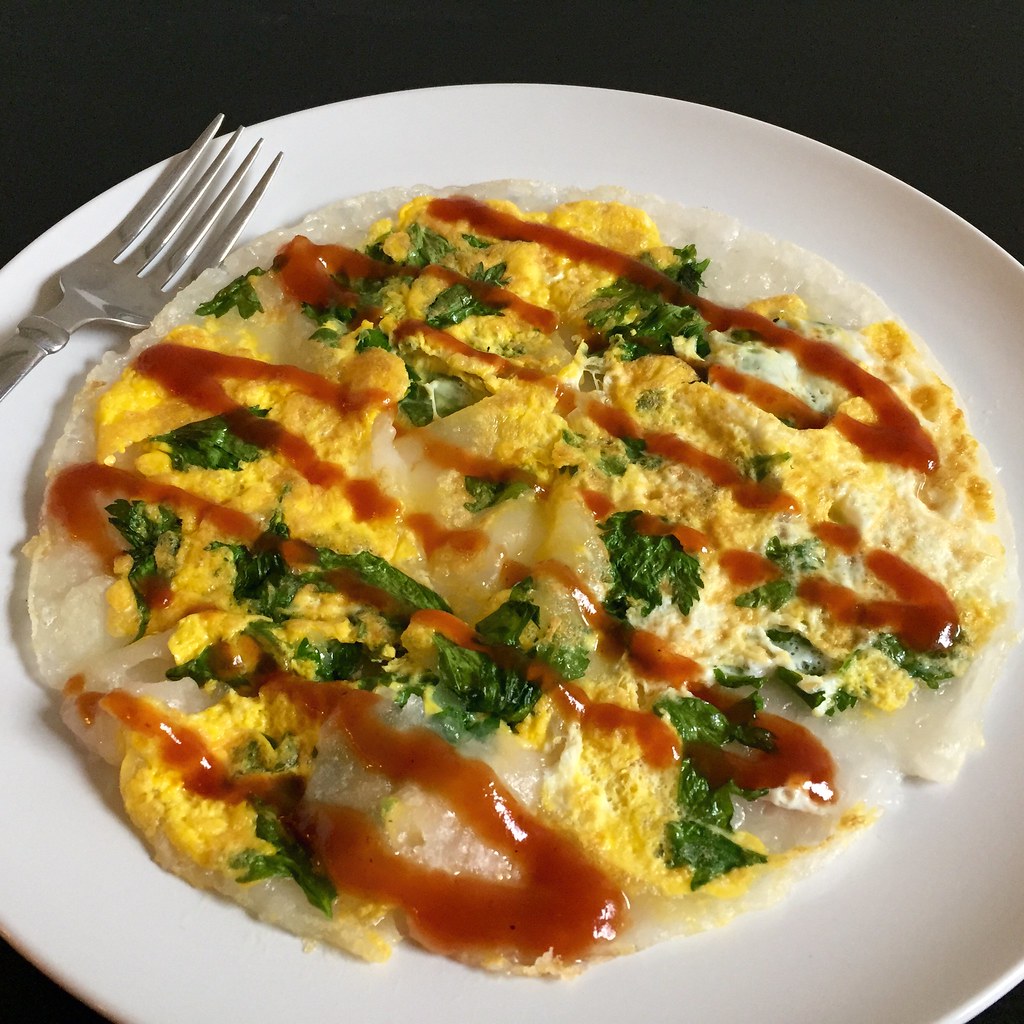 It’s kind of freakish how intact my omelets ended up; I’m used to them being pretty mangled blobs of gelatinous messes.  In fact, the picture above was a little too perfect so I ended up drizzling more sauce on top just to make it messier, which is how I ended up with the top picture.  It’s also more representative of how much sauce you want on the omelet.