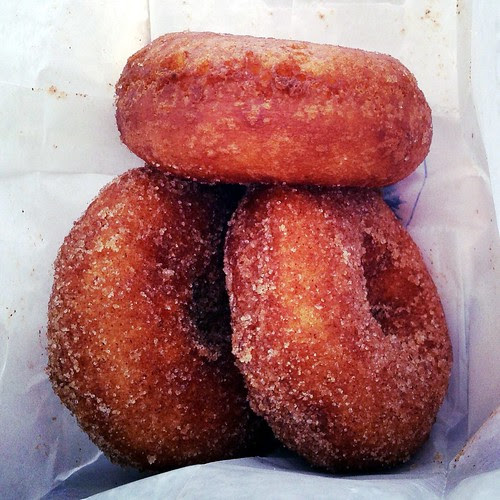 One of my favorite things about fall is apple cider donuts.  They have to come fresh from an apple orchard from New England, though, preferably on a brisk, sunny day.  I’ve tried the ones they sell at super markets and even the state fair, but they’re just not the same.

If you’ve never had one before, you might be disappointed to hear that they don’t really taste like apple cider.  That said, they’re still incredibly delicious and pair perfectly with a nice, cold glass of cider.  I like my cider donuts on the small side, coated with cinnamon and sugar, and, most importantly, fresh from the fryer so that they’re still warm and crispy.  The interior should be cakey, but not dry, and never, ever greasy.

Luckily, even if you don’t live in New England, you can make your own as long as you can get your hands on some real apple cider:  the cloudy, unfiltered kind that burns just a little bit on the way down your throat, not the weak, see through stuff they sell off-season. 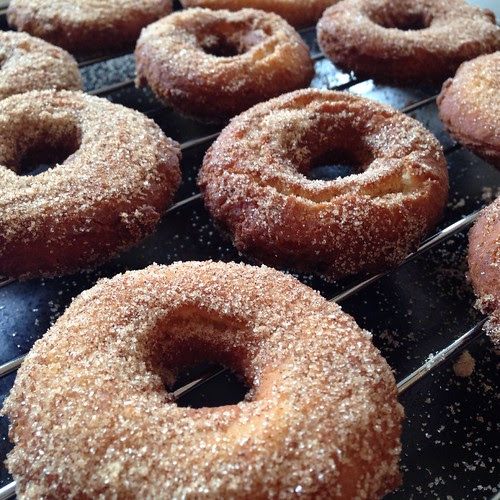 Bring the apple cider to a boil over high heat and cook it until it has reduced to 1/3 cup, 7-10 minutes. Set aside to cool while you prepare the rest of the donuts. 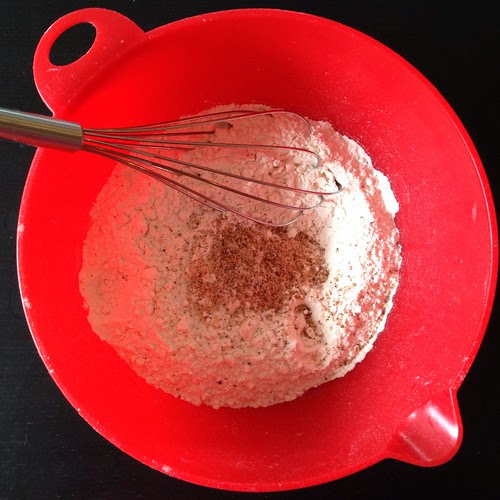 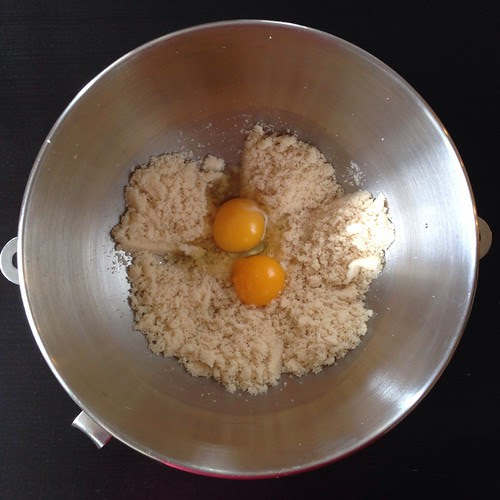 In the bowl of a stand mixer, mix the shortening and sugar together on medium speed until sandy. Add in the egg and egg yolk and mix on high until light and thickened, about 5 minutes.

Mix the reduced apple cider and buttermilk together. Then add the flour mixture, alternating with the milk mixture to the mixer in three additions mixing until just combined. The dough will be soft and sticky much like cookie dough. 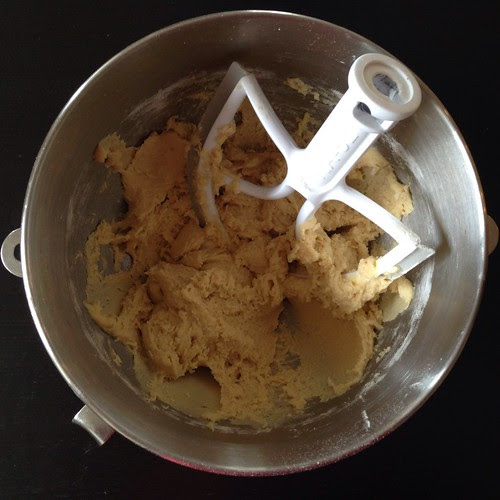 Transfer the mixture to a clean bowl and cover with plastic wrap. Refrigerate the dough for at least one hour or overnight.

When you are ready to roll and fry the donuts, heat a large pot or dutch oven with at least 2 inches of oil over medium heat until the oil reaches 370ºF on a candy thermometer. 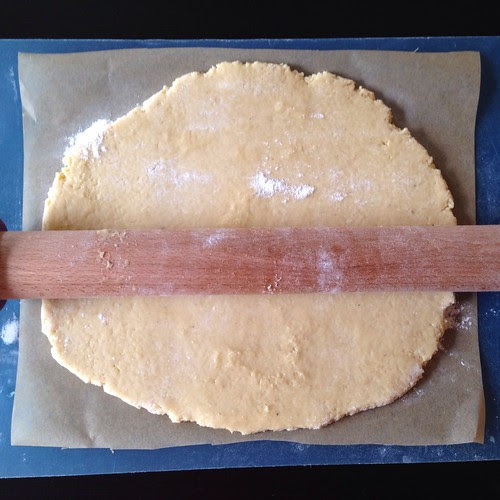 Gently roll the chilled dough out onto a generously floured board or piece of parchment paper into a circle about 1/2” thick and about 8” wide. 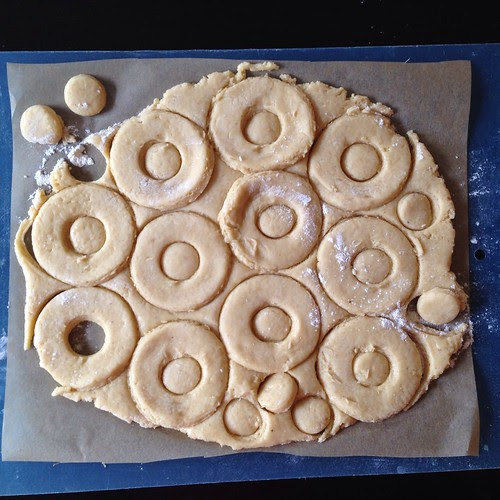 Cut as many donuts as possible, making sure to flour the cutters before each cut.  If at any time the dough becomes too soft to handle, just put it in the refrigerator for a few minutes. Place the cut donuts on a parchment lined baking sheet and refrigerate for 15 minutes until they are slightly firm and easier to handle. While the donuts are chilling, stir together the cinnamon and sugar for the topping in a shallow, wide bowl. 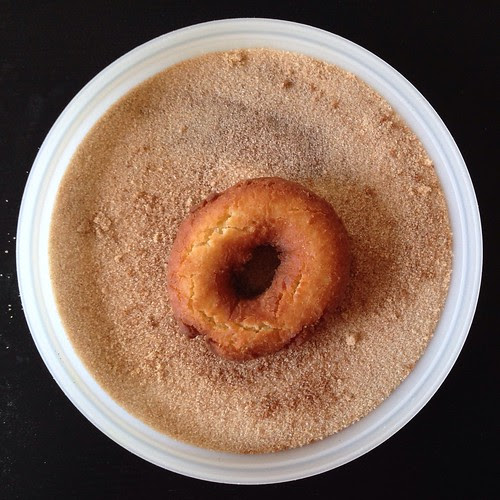 Brush off any excess flour and fry the donuts for about 1 minute per side, being careful not to crowd the pan.  When the donuts are deep golden brown on each side, remove them from the oil, gently blot off excess oil and toss immediately in the cinnamon sugar. 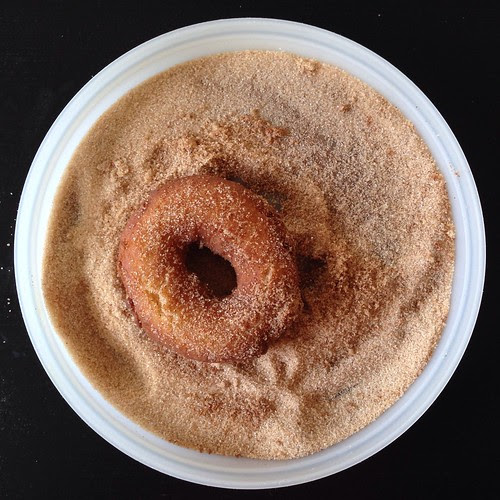 I had a couple of issues with this version:  the finished product was a little too dense for my liking, the outside was only barely crispy, even fresh out of the fryer, and I had a hard time getting the cinnamon and sugar to stick to the donut.  My friends who got to try them liked them enough, though, so I probably just have really high standards when it comes to cider donuts.  Next time I might try Smitten Kitchen’s version, which are fried in Crisco. 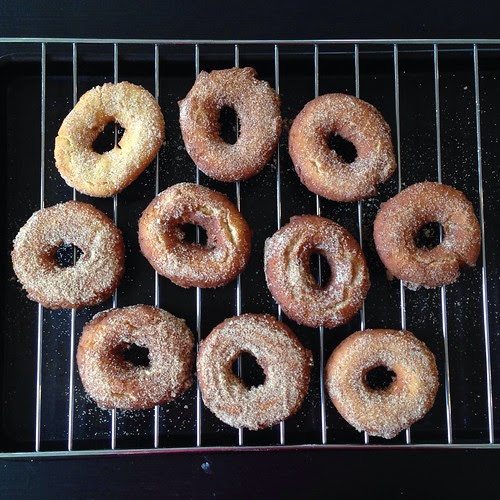 The Cooking of Joy: Cleveland Cassata Cake (Bonus: In a Jar!) cake