Sherlock is back!*  I discovered BBC’s Sherlock last winter and have been impatiently waiting for series 3 for what feels like forever!  What’s so great about the show?  The acting, the writing, the mysteries, the chemistry, and of course, Mr. Benedict Cumberbatch himself.  ^_^

I read in an interview that his favorite dessert is banoffee pie, so I decided to try to make one to celebrate the return of Sherlock.  I’ve been intrigued with this dessert ever since I first saw Juliet offer it to Mark as a sort of peace offering in Love Actually.  With a crust made from crushed digestive biscuits, the pie is filled with layers of creamy toffee, sliced bananas, and lots of whipped cream.  The dessert is British in origin, like the sticky toffee pudding I made previously, and the name comes from an amalgam of “banana” and “toffee”.

I couldn’t find any digestive biscuits in my local grocery store, so I used good ol’ American Nilla wafers.  In a pinch, you could probably use a prepared graham cracker crust.  Some of the recipes I looked up used sweetened condensed milk boiled for hours in the can (essentially homemade dulche de leche) for the toffee layer, but if you don’t have hours, you can just make a quick filling using butter, brown sugar, and sweetened condensed milk.

This dessert kind of reminds me of Benny in that it’s certainly not the prettiest dessert to look at, but once you’ve had some, it’s irresistible.  😉 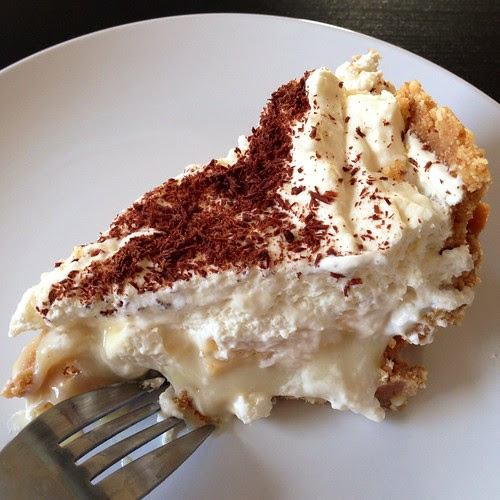 Melt one of the sticks of butter in a small saucepan.

Crush the wafers in a food processor until you get a fine crumb texture. Transfer to a bowl and stir in the melted butter. Press into a pie pan. Chill the crust in refrigerator for at least one hour.

Melt the other stick of butter in a small saucepan. Stir in the brown sugar and melt over low heat. Add the condensed milk and bring the mixture to a boil for a few minutes, stirring continuously.

Pour the filling into the crust. Cool and chill again for at least one hour until the caramel is firm.

Slice the bananas and place them in a single layer on top of the caramel.

Start whipping the cream.  Sprinkle in some powdered sugar until the whipped cream is barely sweet (the rest of the pie is already insanely sweet).  Whip in the espresso powder if using. 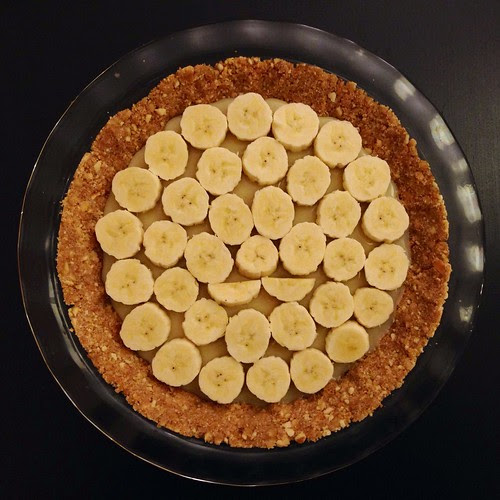 Top the bananas with the whipped cream, sealing the filling in. Sprinkle the top of the pie with grated chocolate. 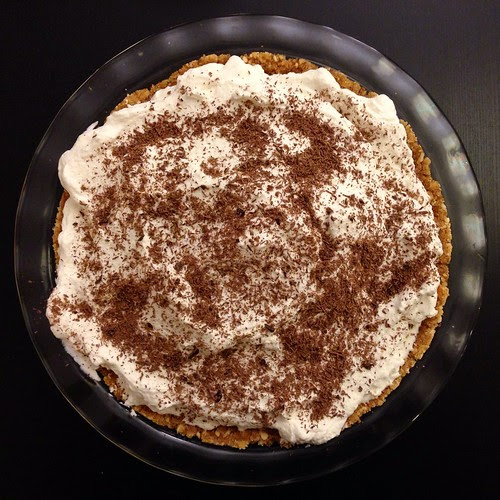 *Okay, I may or may not have already watched series 3 at the same time it aired in the UK since I just couldn’t wait any longer, but for the majority of Americans, it’ll be starting this Sunday on PBS after Downton Abbey!