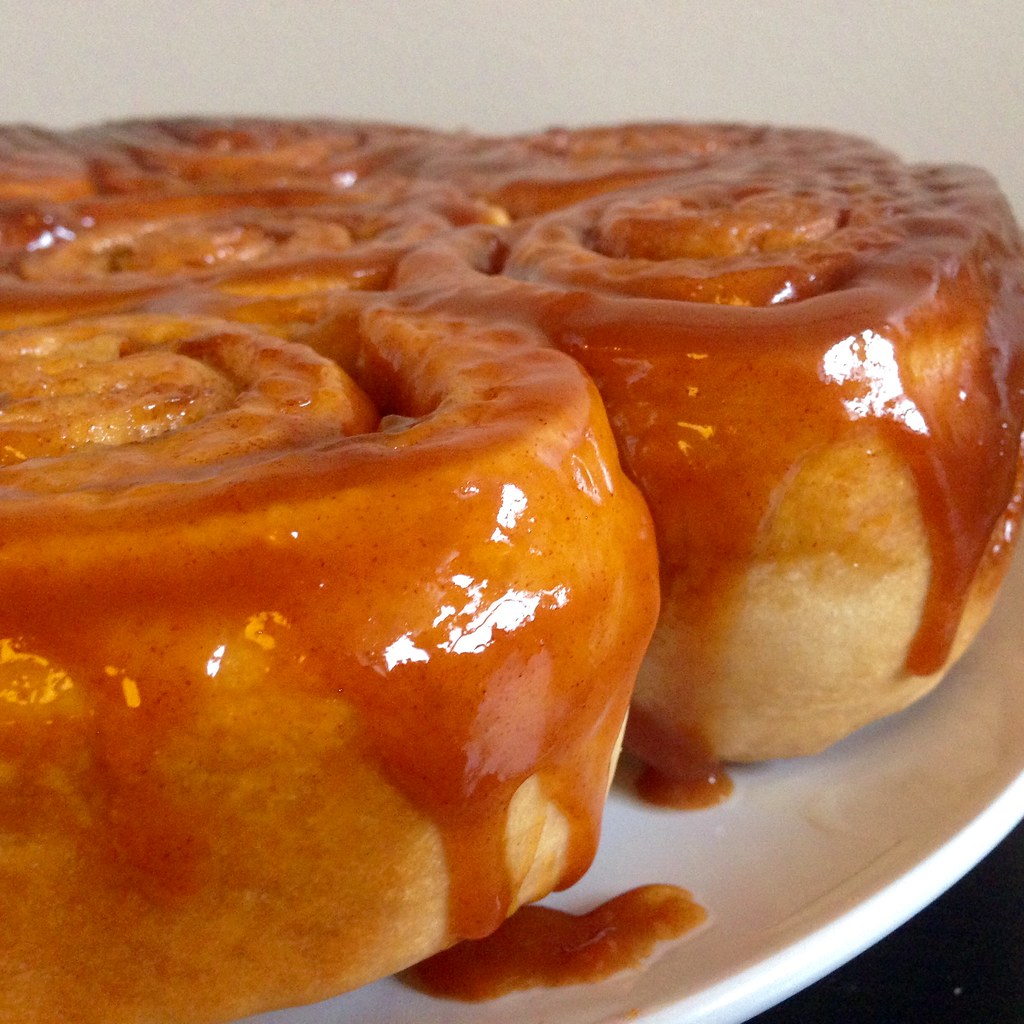 As soon as I saw this recipe on Use Real Butter, I knew I needed to make it.  Combining soft, warm cinnamon rolls with ooey, gooey caramel sauce and diced apples is a totally irresistible combination!

I didn’t have two round pans, so I ended up baking half the rolls in a round pan and half in a square pan.  Because of the shapes of the pans, I decided to make the suggested 7 rolls in the round pan and 9 smaller rolls in the square pan.  I would definitely take the suggestion to place a sheet pan or aluminum foil underneath the pans while baking to catch any caramel that might spill over.

Reducing the apple cider and making the caramel takes a bit of time and monitoring, so you can do those steps the day before if you like.  You could even make everything up to the point where you place the shaped buns in the baking pans and refrigerate them overnight to bake the following morning after they’ve come to room temperature and doubled in size.

I underestimated the amount of all-purpose flour I had on hand when I started making this and had to replace half the amount of flour with white whole wheat flour.  I don’t think it affected the flavor too much, but it was probably less fluffy and soft as it could have been.  I also halved the amount of butter used in the filling because I didn’t think I needed a full stick in there.  I like to think of my version as “half-healthy”. 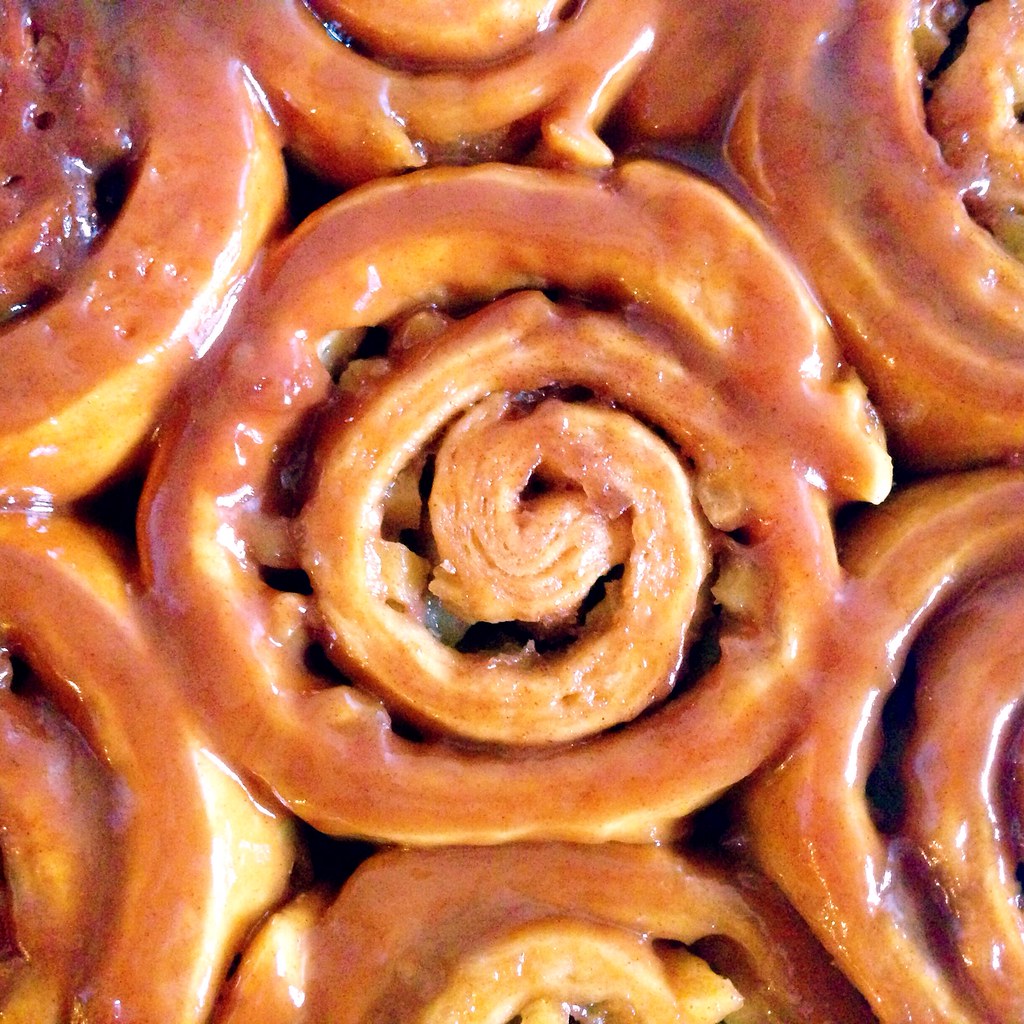 Combine 2 1/2 cups of flour and the yeast in
the mixing bowl of a stand mixer. Place the milk, 1/4 cup sugar, 1/4
cup butter, and 1 1/2 teaspoons salt in a medium saucepan over medium
heat. Stir together to dissolve the sugar until the mixture is just
warm (the butter should be just melted). Pour the milk mixture into
the mixing bowl containing the flour and yeast. Add the egg. Beat with
paddle attachment for 30 seconds on low speed. Beat on high speed for 3
minutes. Stir in as much of the remaining flour as the dough can take.
Knead 3-5 minutes until the dough is smooth and elastic (you can do
this with a dough hook and finish by hand or knead by hand). Grease a
large bowl with the vegetable oil. Shape the dough into a ball and
place in the large greased bowl. Turn the dough over to coat the entire
thing with oil. Cover and let rise in a warm place for 45-60 minutes
or until the volume has doubled.

In a medium bowl, combine the brown
sugar, 1/2 cup granulated sugar, 1/4 cup all-purpose flour, and 1
tablespoon cinnamon. Cut 1/2 cup butter into the mixture until it
resembles coarse crumbs. Set aside.

Pour the apple cider into a
medium saucepan and warm over medium-high heat. Let the cider boil down
until it has reduced to 1/4 cup in volume (doesn’t have to be exact,
but no more than 1/3 cup), about 20 minutes.  Measure out the cream into a microwaveable measuring cup and microwave for 30 seconds .  Place the sugar in a clean medium saucepan over medium heat.
When the sugar begins to melt, gently swirl it around to distribute the rest of the unmelted
sugar. When completely melted, let the liquid sugar turn a medium to
dark amber color. Slowly pour the hot cream into
the caramelized sugar while stirring. It will splatter and bubble,
that’s okay, keep stirring. Return the pan to low heat and stir until all of the hard
caramelized sugar has melted and your sauce has thickened, about
20 minutes. Stir in the reduced apple cider, 1/2 teaspoon cinnamon,
1/4 teaspoon sea salt, and vanilla.

Punch the dough down and
turn it out onto a lightly-floured large (bigger than 24×16 inches)
work surface. Alternatively, you can halve the dough and work on a smaller surface, which is what I did.  Cover with a damp cloth and let rest for 10 minutes.
Butter two 9-inch round pans or two 8-inch square pans. Pour half of the apple cider caramel
in each pan. Set aside. Roll the dough out into a 24×16-inch
rectangle, if you’re working with all the dough at once.  If you’re only working with half, roll out into a 12×16-in rectangle. Sprinkle the cinnamon-sugar filling evenly over the
rectangle, leaving a 1-inch margin bare along the long side furthest
from you (this is to make sure you can pinch it closed when you roll it
up). Do the same with the diced apple. 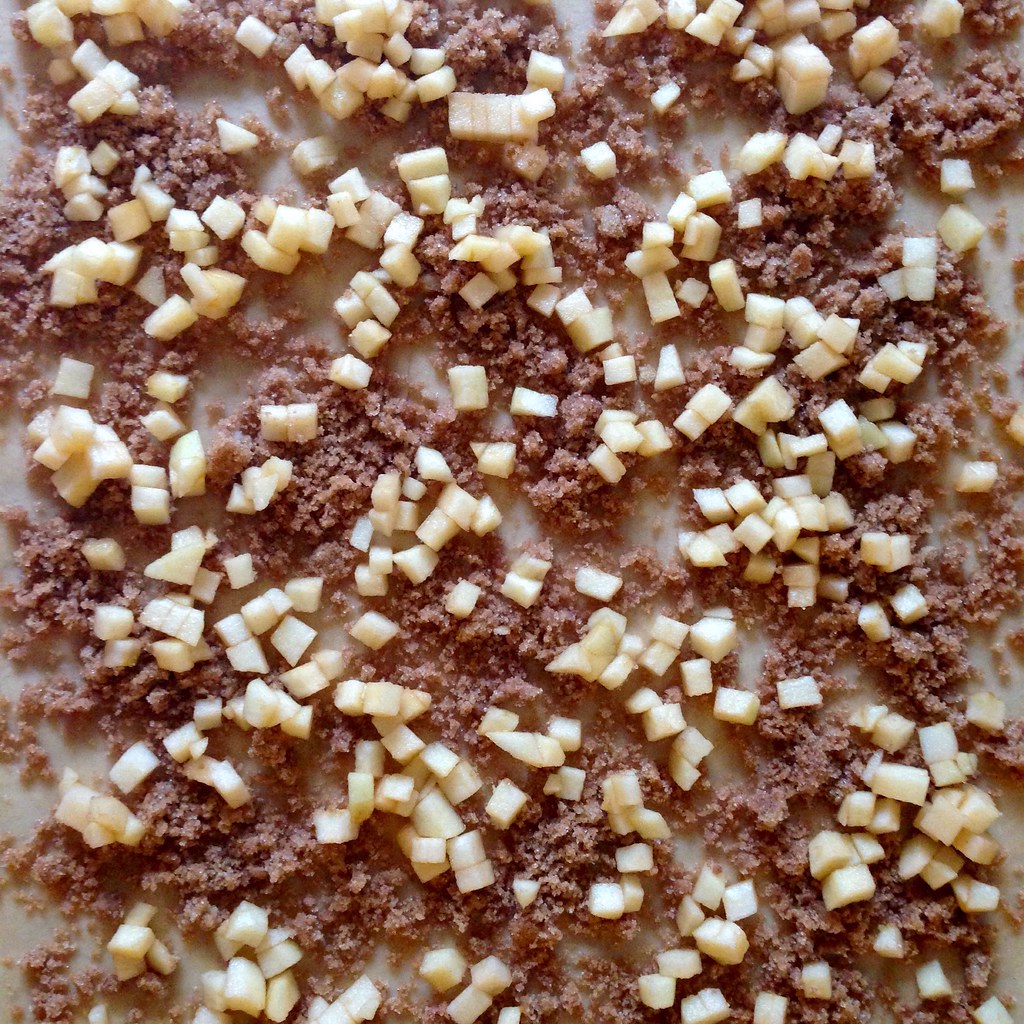 Roll up the dough incrementally to ensure that the filling stays put.  Pinch the clean edge onto
the roll to seal it. Cut the roll into 14 equal-width pieces if you are using the round pans and 18 equal-width pieces if you are using the square pans. Set the slices cut-side down in the baking pans, cover and let rise for 45 minutes until doubled in
volume. 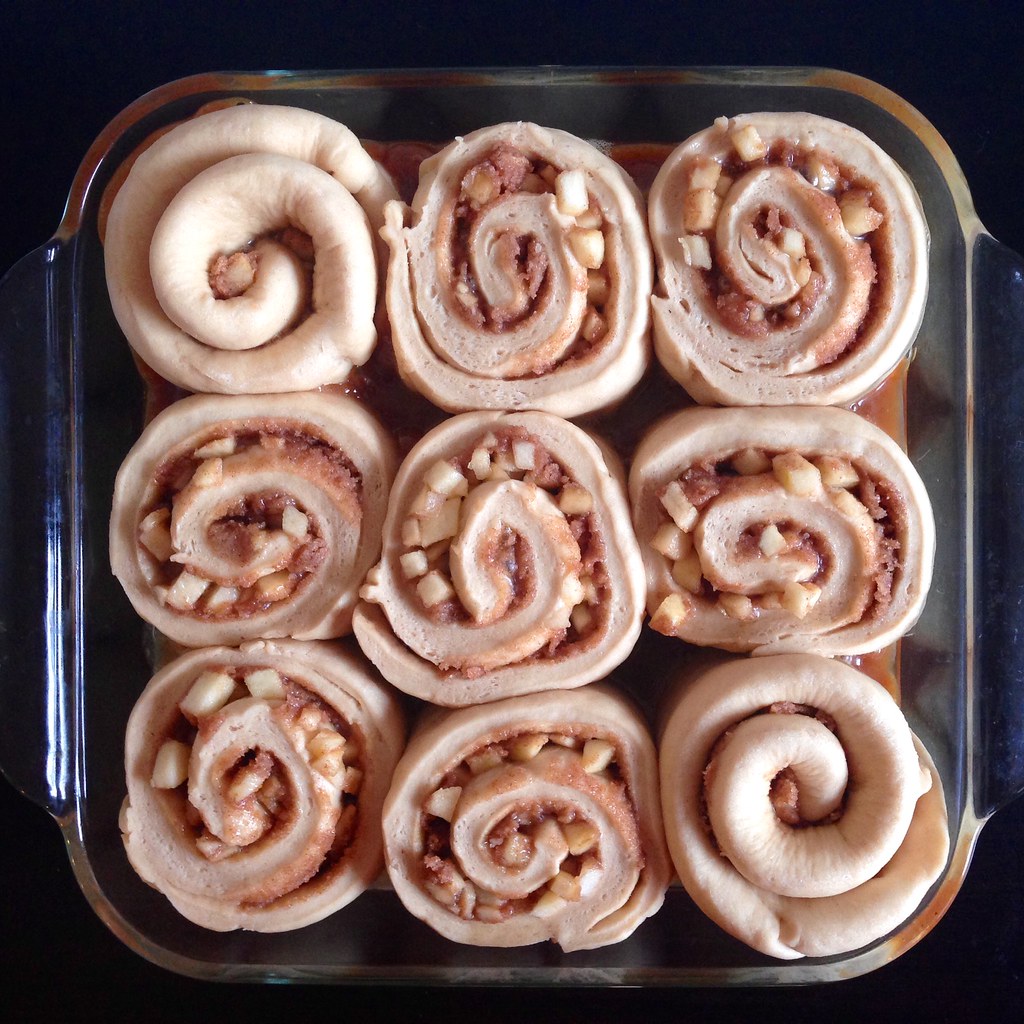 Preheat oven to 350°F. Uncover the rolls and bake for 45
minutes until lightly browned. If using 2-inch high pans, you may want
to set foil or a baking sheet under the rack to catch any caramel drips.
Invert the baking pans onto a serving plate and serve warm. 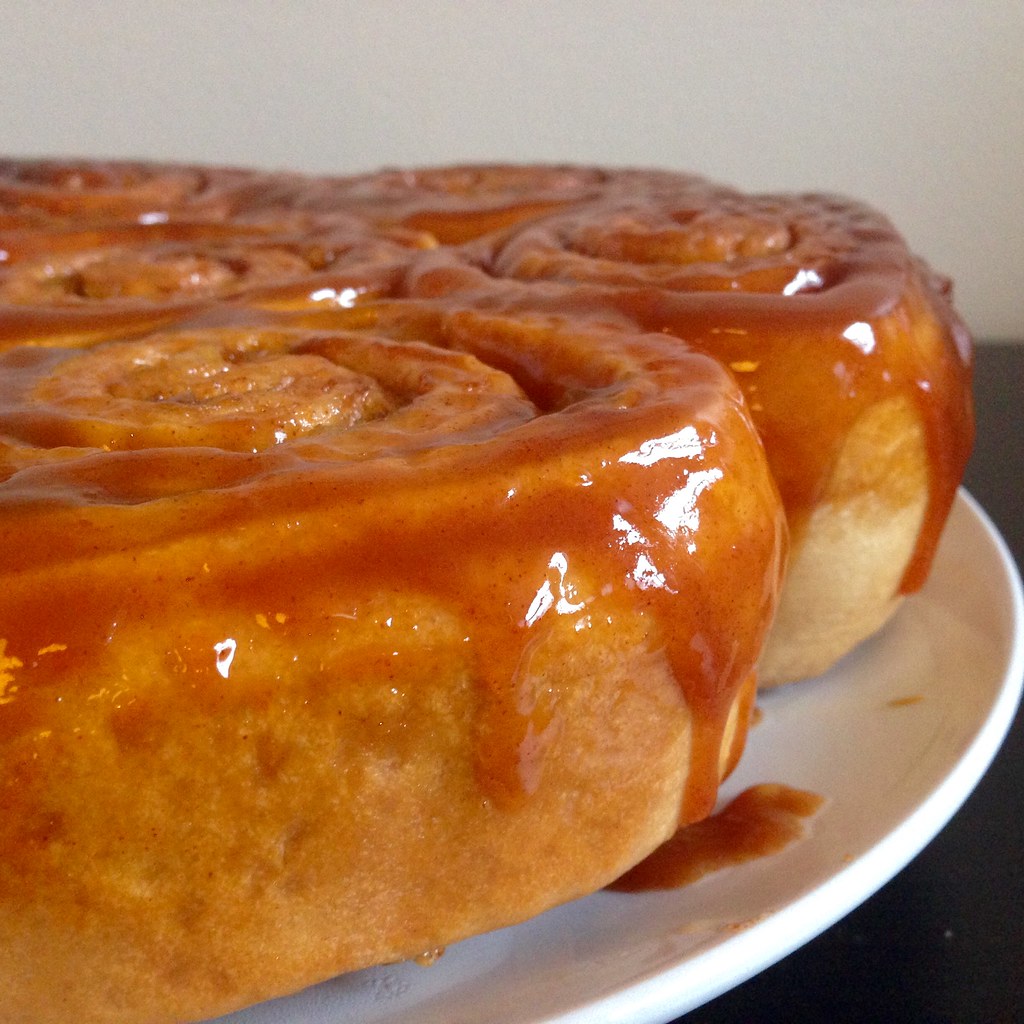