The other best meal I’ve had in my life (besides lunch at L’Arpège) was at Eric Ripert’s Blue at the Ritz Carlton on Grand Cayman.  I ordered the tasting menu, and course after course of the best seafood I’d ever had were brought out to me starting with his signature Tuna Foie Gras. 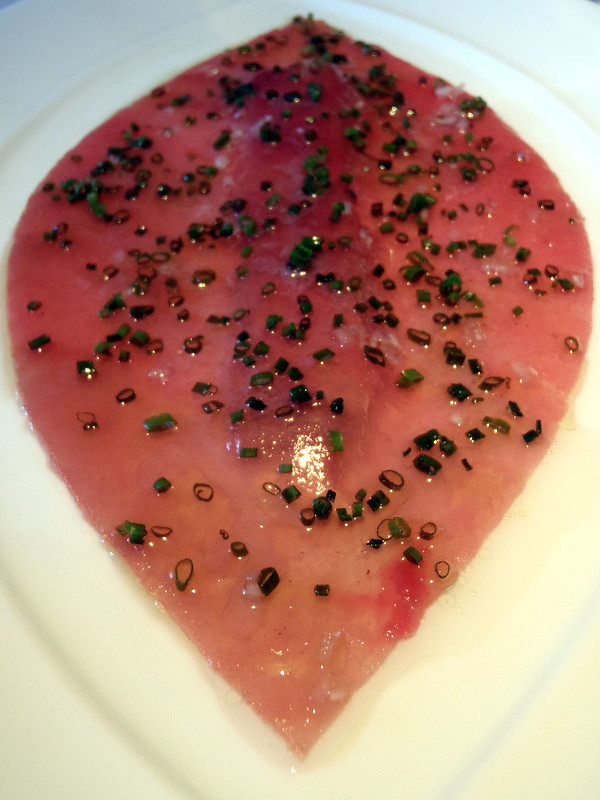 I’m usually not a fan of foie gras not only because of the animal cruelty behind it, but also because I just don’t really think it lives up to the hype.  But I’ll admit, that dish was the first time I liked foie gras.


Sadly, I’ve never been to Ripert’s outpost in New York, La Bernardin, but I will gladly try his genius recipe for making crispy-skinned fish.  The technique is surprisingly simple and uses a secret ingredient:  Wondra flour.  If you can’t find this in your supermarket, you can substitute with all-purpose flour or fine cornmeal.


I decided to take the recipe a step further and marinate the salmon first and then slather it with some homemade teriyaki sauce at the end.  I liked this technique because instead of a dry slab of salmon meat topped with a corn syrup sweetened soy sauce, you get a moist, flavorful fillet of salmon with a crispy skin. 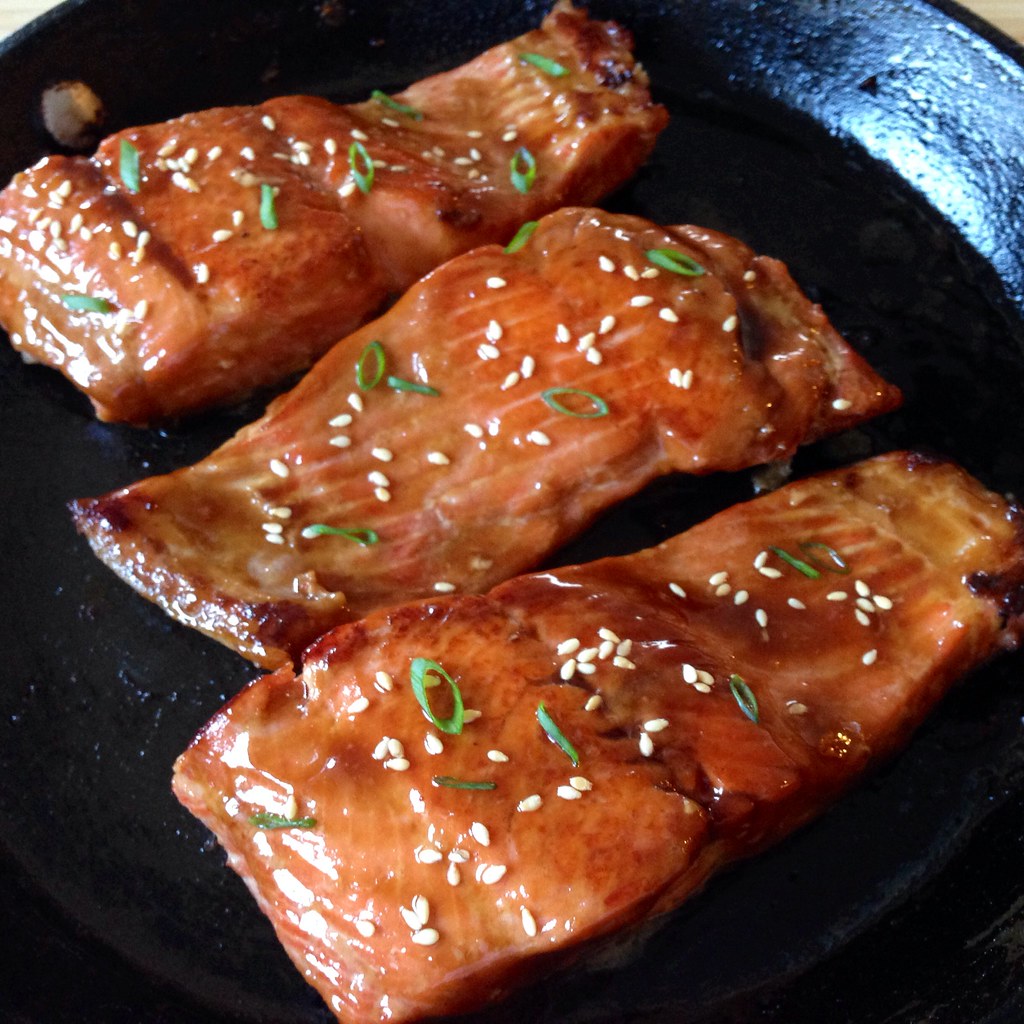 Mix together the soy sauce, mirin, sake, and sugar and heat in the microwave on high for a minute.  Stir until the sugar has completely dissolved.  Transfer to a small baking dish and add the salmon fillets, skin side up.  Cover and marinate in the refrigerator for 30 minutes to overnight. 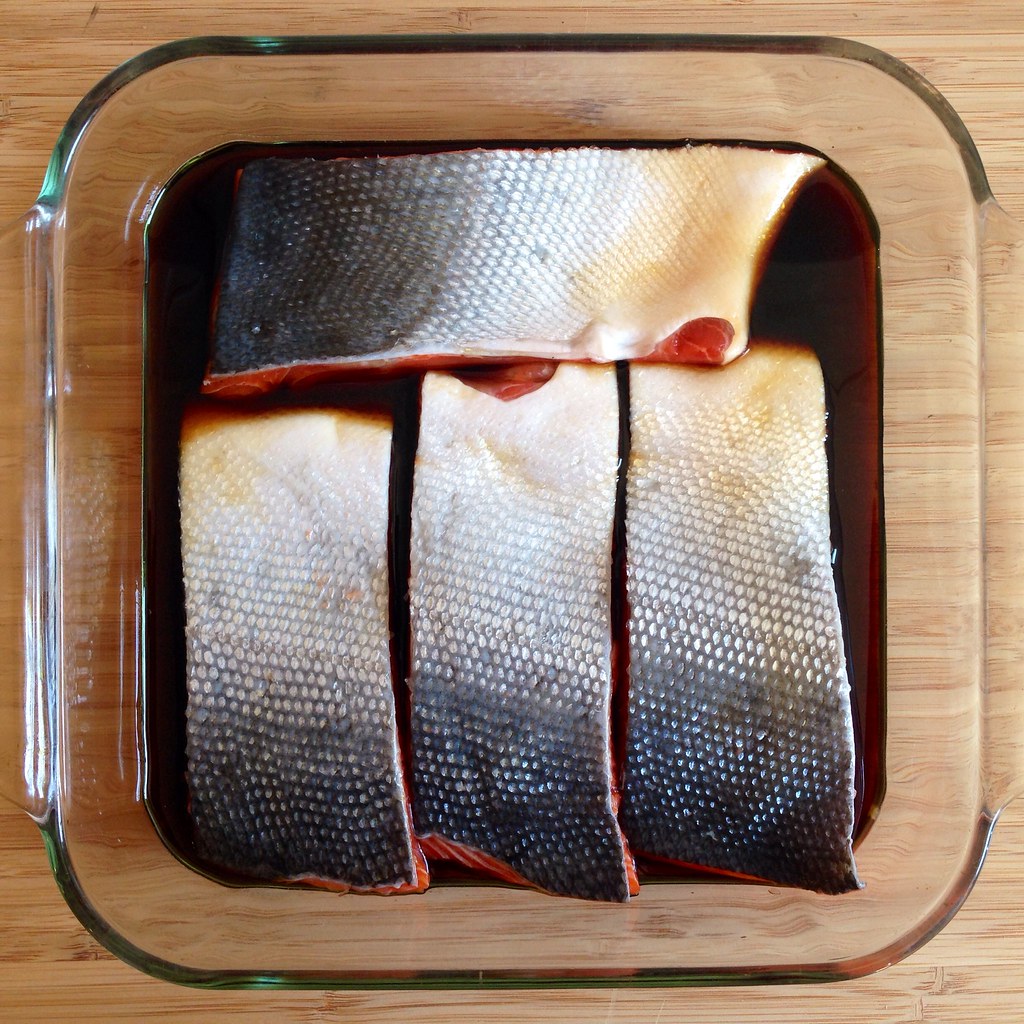 Remove the salmon from the baking dish and reserve the marinade.  Dry the skin with a paper towel and dust with Wondra flour, blowing off the excess. 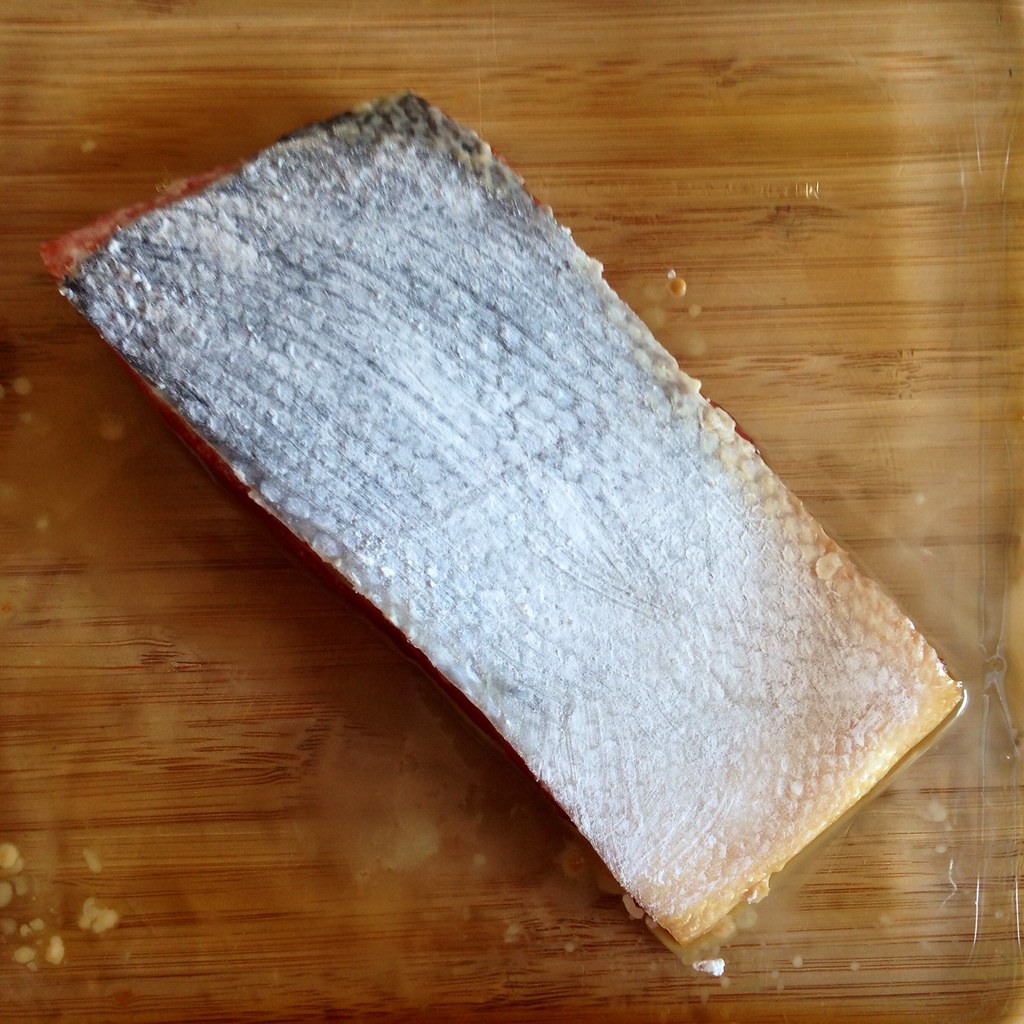 Pour the marinade into a small saucepan and heat on medium until it starts to simmer.  Add the cornstarch slurry and stir until the teriyaki sauce thickens.  Remove from heat and set aside.

Heat the oil in a large, oven- and flame-proof sauté pan on the stovetop until the oil is very hot, but not smoking.  Put the fish in the pan, skin side down, and press down on the fish with
a spatula. Sear on the
stovetop over medium heat until golden brown on the bottom, about 3
minutes. 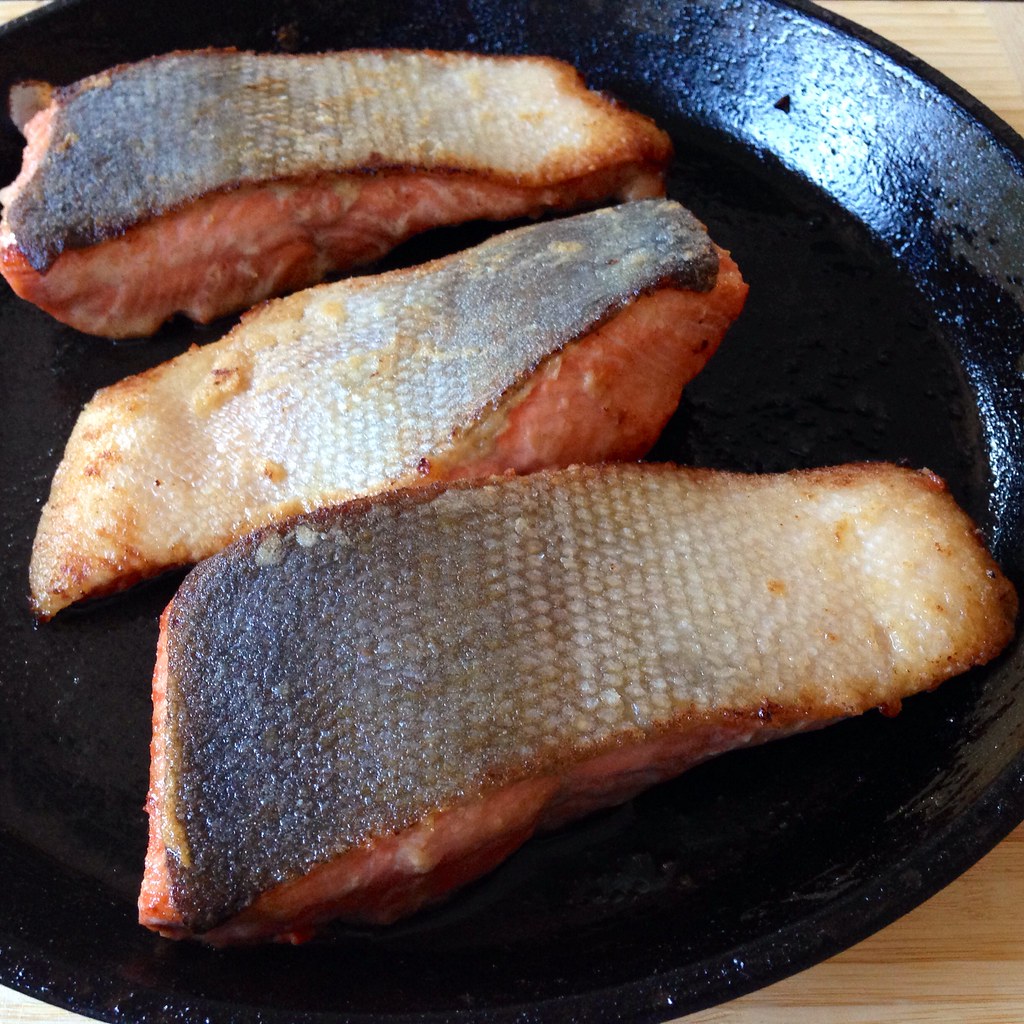 Turn the fish over, put the pan in the oven, and cook another 2 to 3
minutes, until a metal skewer can be easily inserted into the center of
the fillet and, if left for 5 seconds, feels just warm when touched to
your lip. 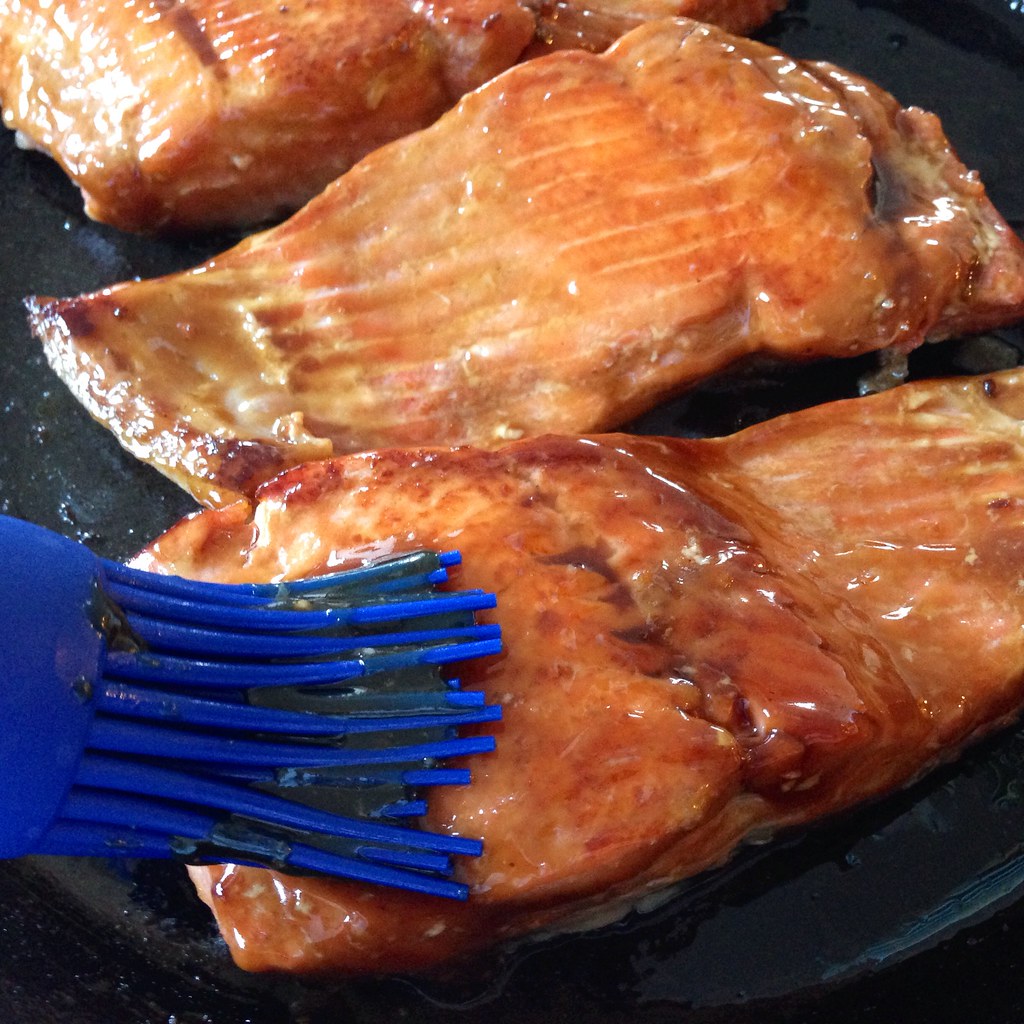 Remove from the oven, turn the fillets over again, and brush with the teriyaki sauce.  Garnish with chopped scallions and sesame seeds and serve immediately. 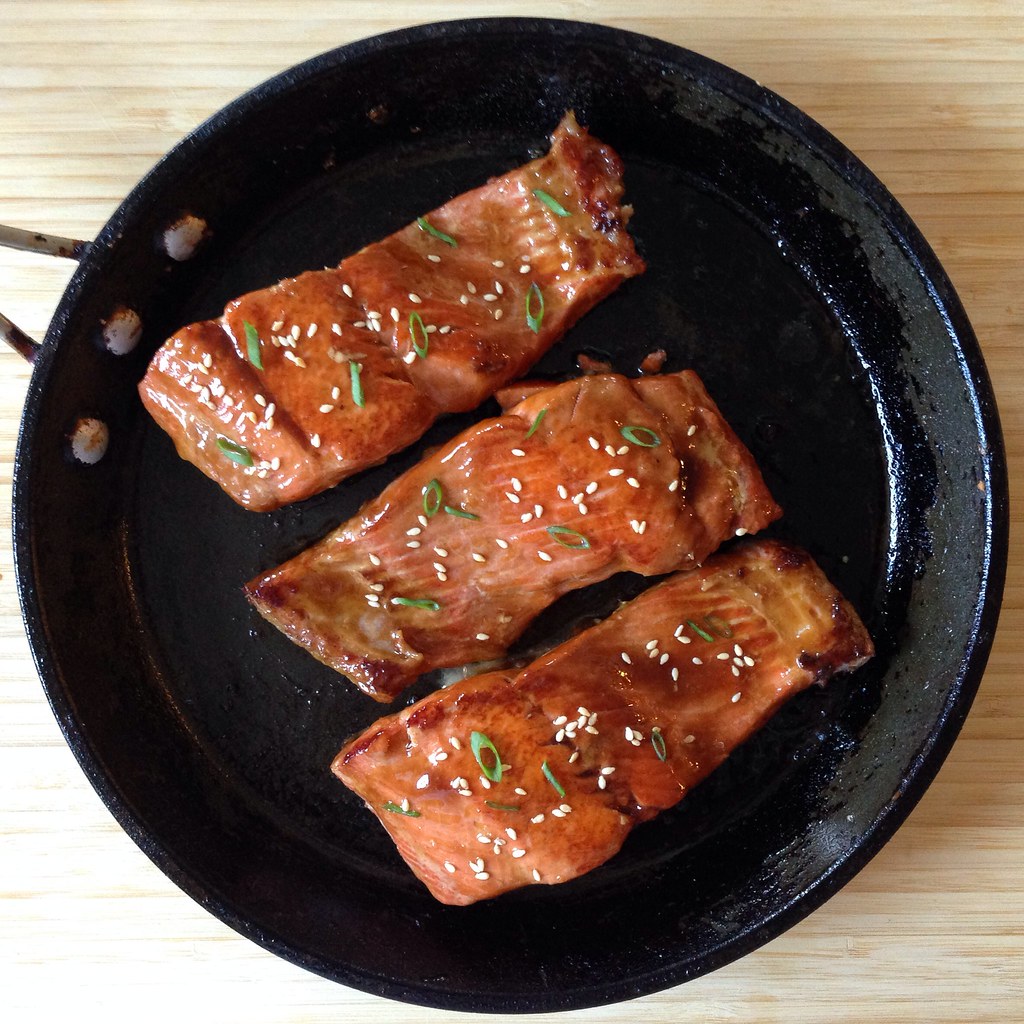