The first (and only other) time I made lobster bisque was during grad school with my friend Anthony.  We were cooking for our church small group, and halfway through making it, he realized that we had added twice as much butter as the recipe called for.  But when we tried it, it tasted fine, and probably even a little better because of the added butter.  ^_^

If you’re going through the trouble of steaming your own lobsters, you might as well save the steaming liquid and all the juices that drip out of the lobster when you crack it open to make lobster bisque the next day.  You’ll also want to save all the lobster shells to make the stock with. 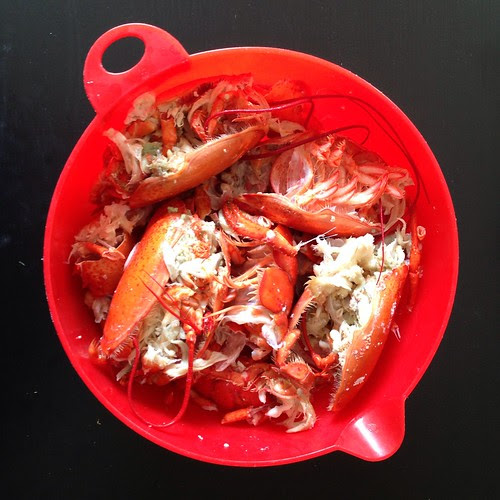 I used this recipe from Bon Appetit as a guideline, but I used 4 lobsters, doubled the sherry (because I didn’t have any brandy), and used water instead of the fish stock or bottled clam juice.  I also omitted the tarragon because I couldn’t find any in the store, and instead of thickening the bisque with cornstarch I used a blond roux (had to add the butter in somewhere).  Four lobsters will give you way more meat than you need for the bisque, but you shouldn’t have any problems using it in another dish. (May I suggest brown butter vinaigrette lobster buns or ramen lobster rolls?) 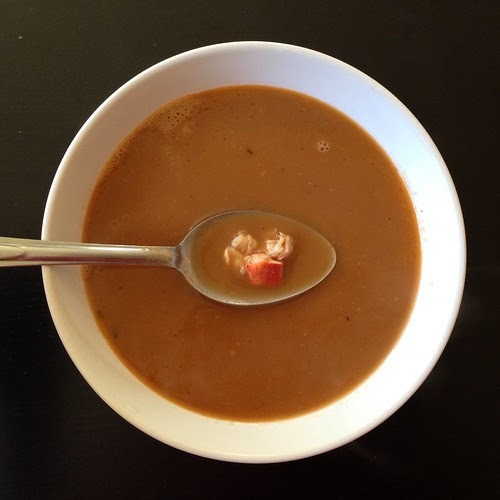 Heat olive oil in heavy large pot over high heat. Add lobster shells and bodies and sauté until shells begin to brown, about 8 minutes. Add onion and next 8 ingredients.  Boil until almost all liquid has evaporated, about 4 minutes. Add the reserved steaming liquid and lobster juices and enough water to make a total of 6 cups of liquid. Simmer 1 hour.

Strain soup through sieve set over large saucepan, pressing firmly on solids. Whisk tomato paste into soup. Simmer until soup is reduced to 3 cups, about 15 minutes. (Can be prepared 1 day ahead. Cover and refrigerate.)

In a separate saucepan, melt the butter over medium heat.  Add the flour and whisk together.  Cook until the roux turns a pale blonde.  Whisk in the lobster stock and cream and bring to a boil.  Continue stirring to ensure that the roux is dissolved and doesn’t burn.  After a few minutes the bisque should thicken slightly. 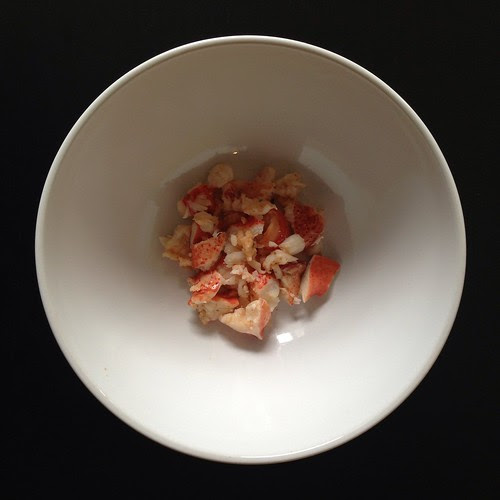 Divide the lobster meat among 6 soup bowls.  Ladle in the bisque and serve hot. 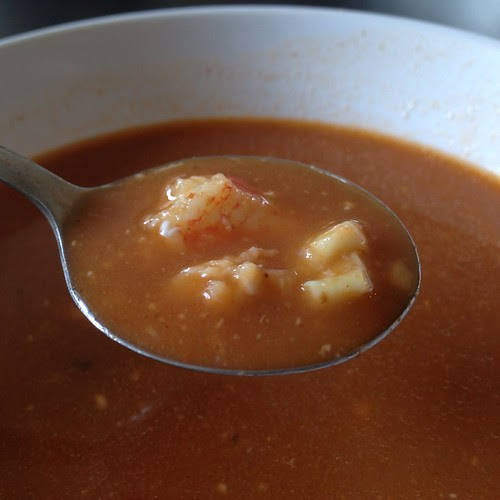 I was surprised at how flavorful the bisque was even though I didn’t add any salt (other than the original amount I added to the steaming liquid, which was like a large pinch).  I was tempted to add a drizzle of flavored oil on top, but then I realized it would only be to make the bowl more photogenic.  It honestly needs absolutely nothing added to it, so I just kept it that way.