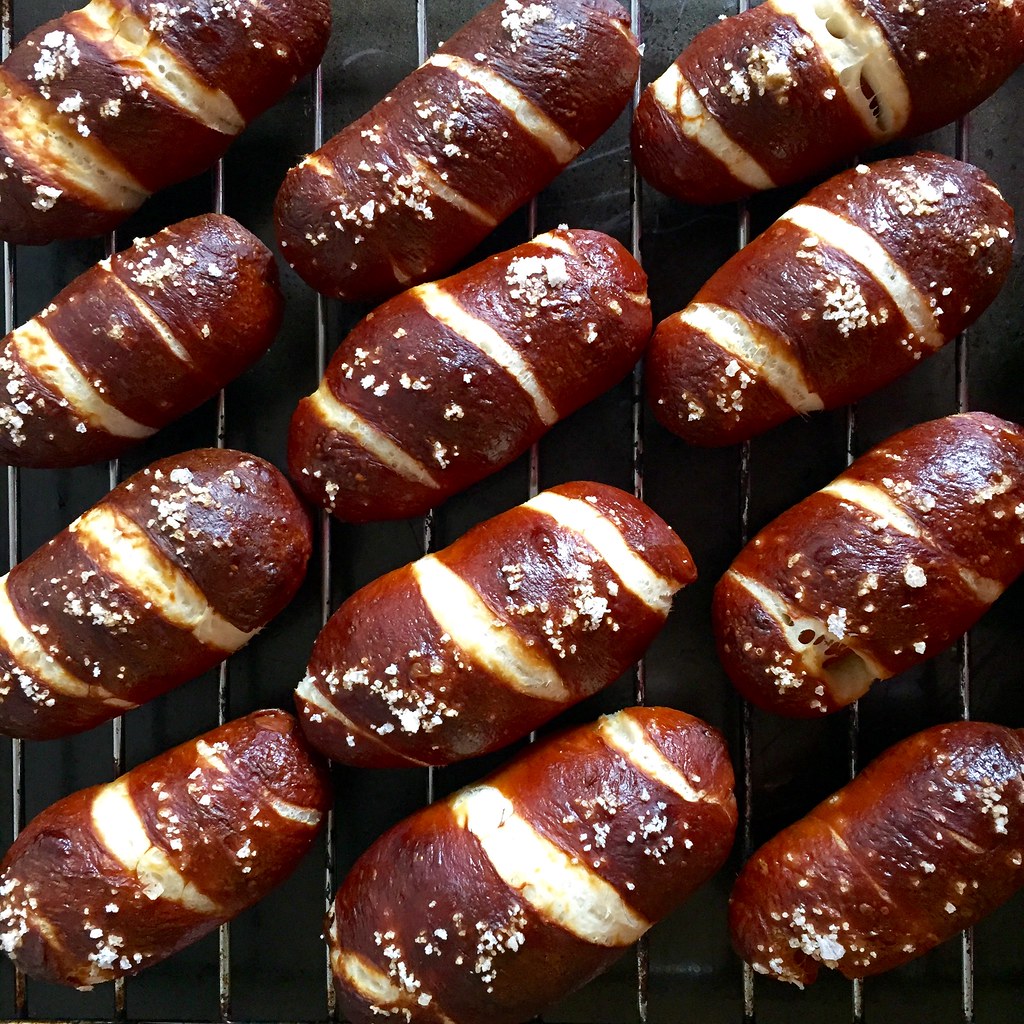 My church held their second annual Highrocktoberfest last week and asked me if I could provide some snacks again.  Last year there was a competition for best cornbread, which I won with my Elote-Style Cornbread Waffles.  This year there was no such competition; I was just told to make something that would go well with beer.  Since I’m not a big beer drinker I wasn’t really sure what that would be, but then I took inspiration from the fact that this was a riff on the German Oktoberfest. What could be more German than sausage and pretzel? 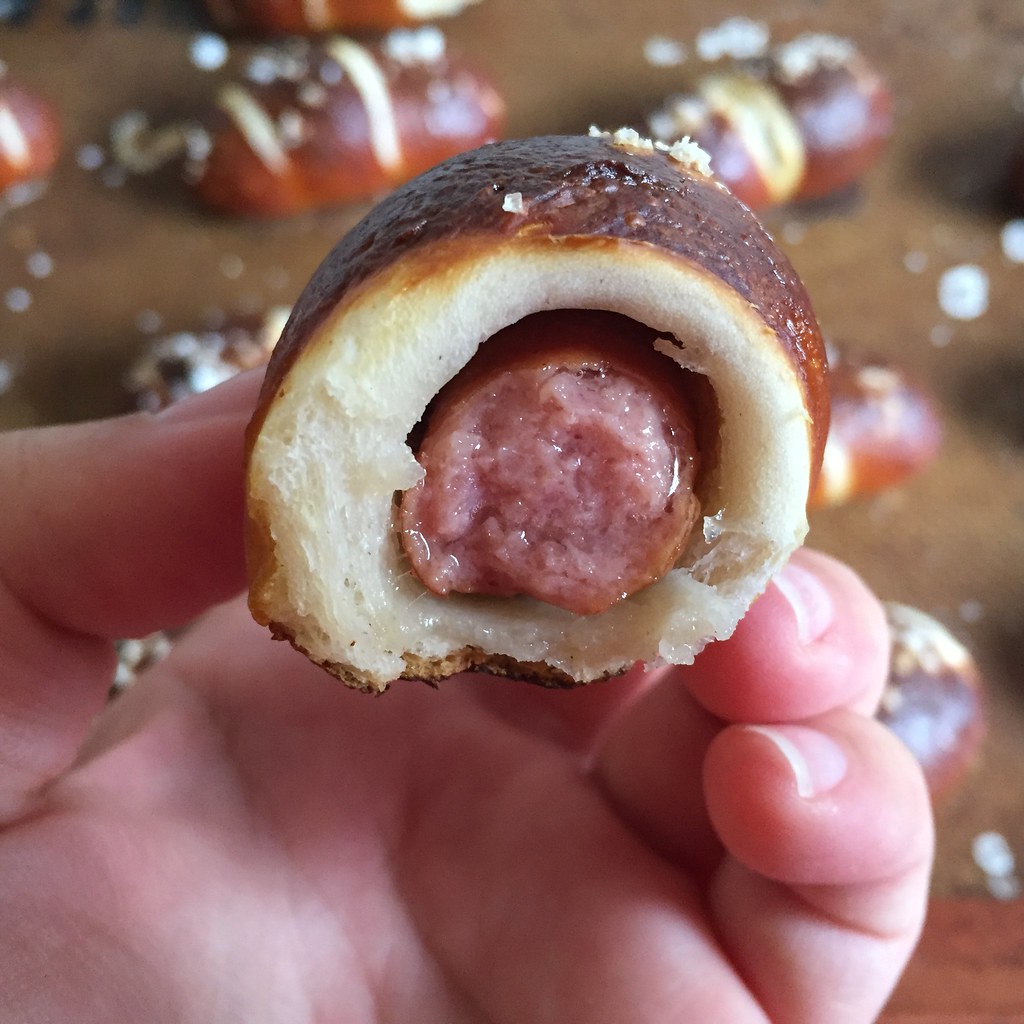 I pretty much followed Alton Brown’s soft pretzel recipe but decided to skip the salt in the pretzel dough since the sausage would provide enough salt.  I also threw in some diastatic malt powder since I had a lot left over from making croissants.  You can use cocktail weiners for this, but I was able to find mini kielbasa sausages at my grocery store so I went with those.  And instead of buying pretzel salt, I just used a flaky sea salt.  I wouldn’t suggest using regular table salt for the topping, and even regular kosher salt might be too fine. 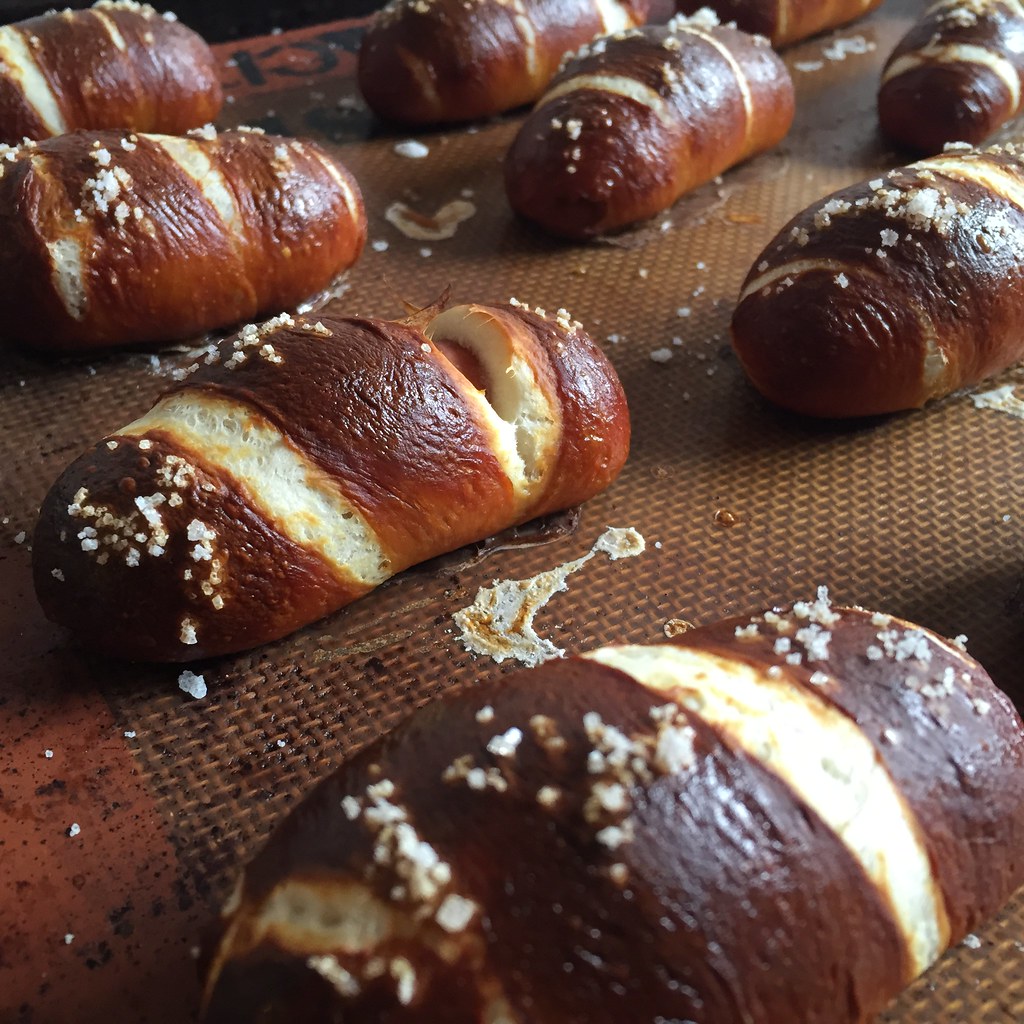 Mix the water and sugar in the bowl of a stand mixer, then sprinkle on the yeast.  Let sit for about 5 minutes until foamy.

Add the flour, malt powder (if using), and melted butter and mix to combine on low using the dough hook.  Once the dough comes together, adjust the speed to medium and knead for 5 minutes.  Transfer to an oiled bowl, cover, and let rise in a warm spot until doubled, about an hour.

Divide the dough in half, then each half in half, each quarter in half, and each eighth in half.  You’ll end up with 16 pieces of dough.  Divide each of these pieces into thirds so you end up with 48 pieces of dough.  One at a time, roll the dough into a long snake about 9″ long.  Starting at one end, wrap the dough around a weiner until it is completely encapsulated, sealing the ends.  If you have leftover dough, just pinch it off and reserve*.

In a large pot, mix the baking soda with 10 cups of water and bring to a boil.  Working in batches, add the pretzel dogs to the boiling water and cook for 30 seconds.  Remove with a slotted spoon and place on a parchment or Silpat-lined baking sheet, 1″ apart from each other.

Beat the egg with a tablespoon of water.  Brush each of the pretzel dogs with the egg wash and sprinkle with the salt.  Bake for 10-12 minutes, until dark golden brown.  Cool on a wire rack.  Serve with honey mustard dip (recipe below).

*If you have enough extra dough, you can try making some traditional pretzels! 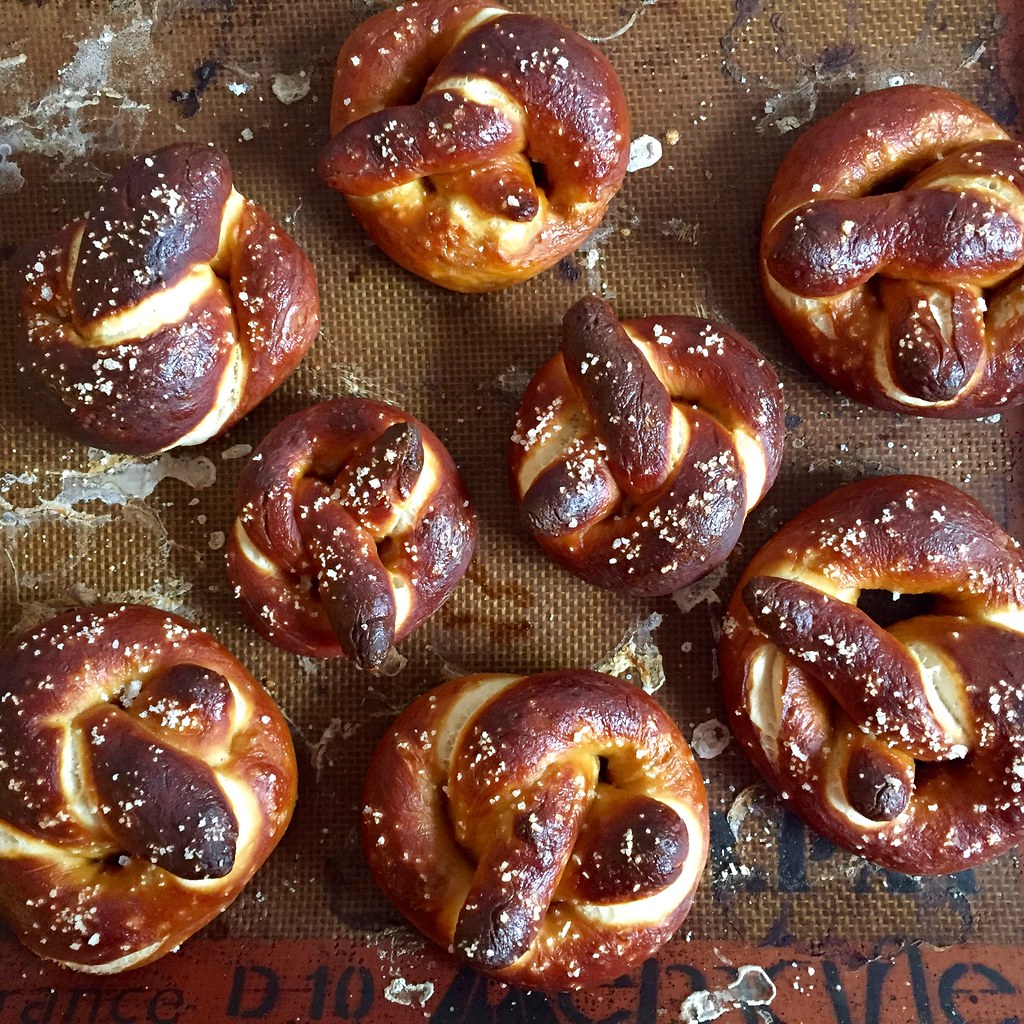 Mix together and serve with the pretzel dogs.

I made this dip to go with the pretzel dogs, but after all those were gone, they put out hard pretzels to snack on and it went really well with those too!