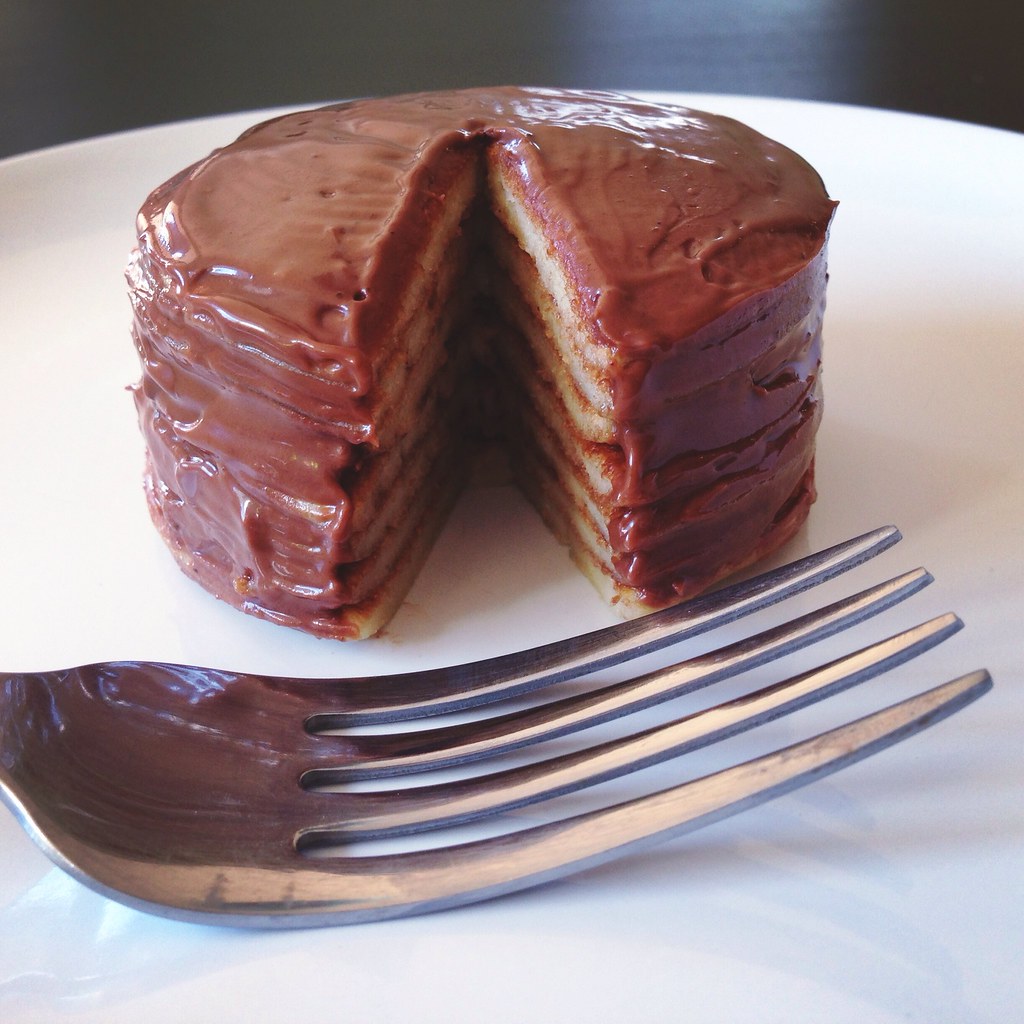 Like my post on flower pavlovas, this post is less of a recipe and more of a tutorial.  I had some leftover buckwheat pancake batter last weekend and after seeing these super cute mini crepe cakes, I thought I’d try to make some myself.  I was ambitious enough to make ten tiny crepes, but not enough to make my own filling so I just melted some Nutella and used that in between the layers. 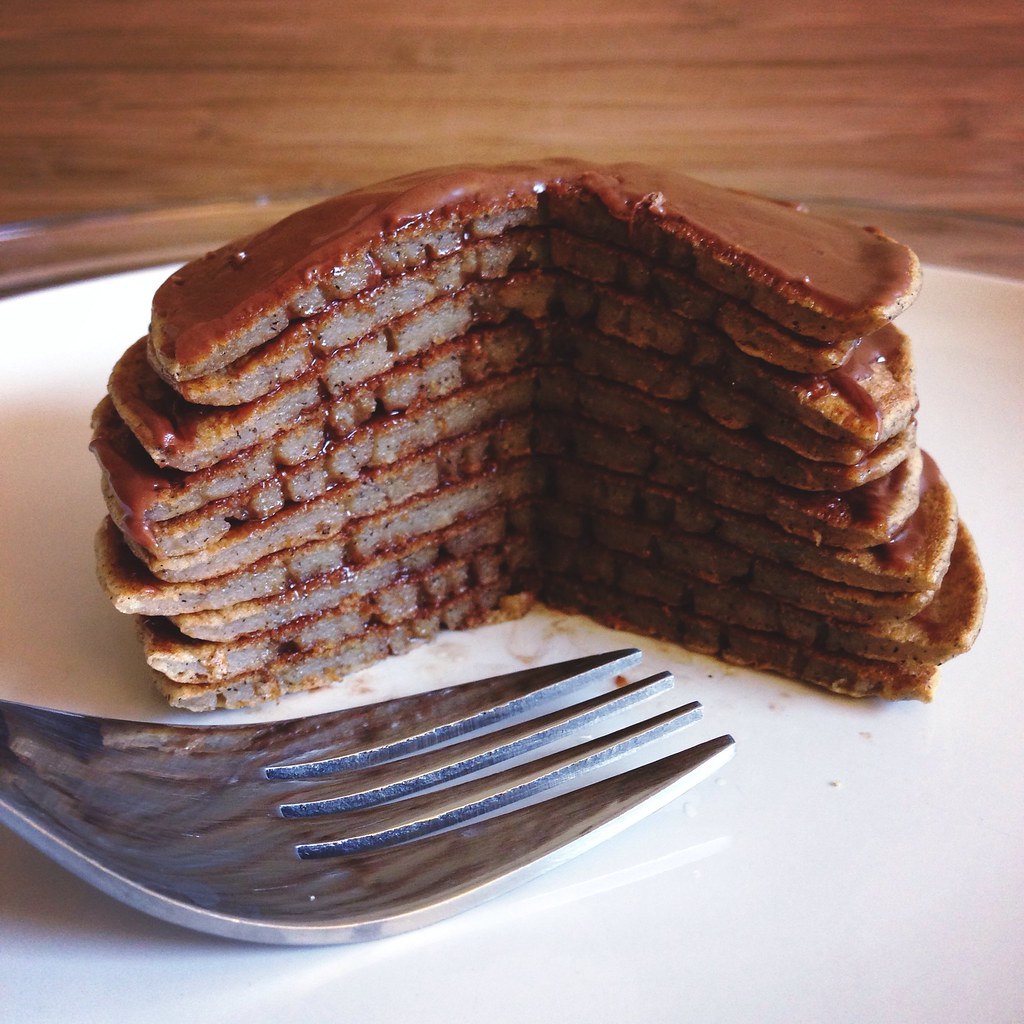 Instead of using a cookie cutter to cut out the mini crepes, I wanted to see if I could make consistently sized crepes by using the same amount of batter each time.  I used a Chinese soup spoon that holds about 4 teaspoons of batter, and it worked pretty well. 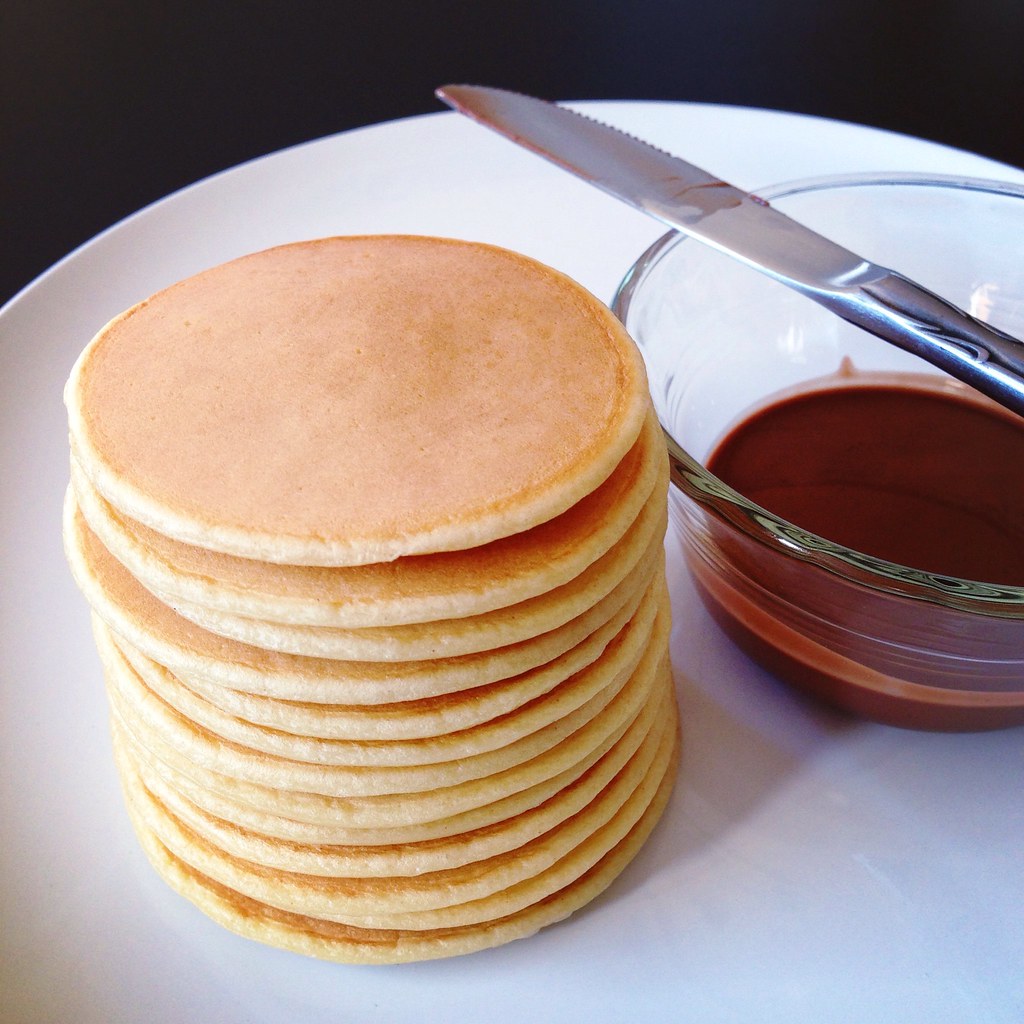 For the next batch, I wanted to try frosting the outside of the “cakes” to make it look more like a miniature layer cake.  I was out of the buckwheat batter, so I used Alton Brown’s sweet crepe batter.  I found that if I carefully poured the batter into the center of the heated pan, the crepes stayed more or less the same size and shape each time.  It did mean I wasn’t getting paper thin crepes because I wasn’t swirling the batter around, but I was more concerned about reproducibility than the thinness of the crepes. 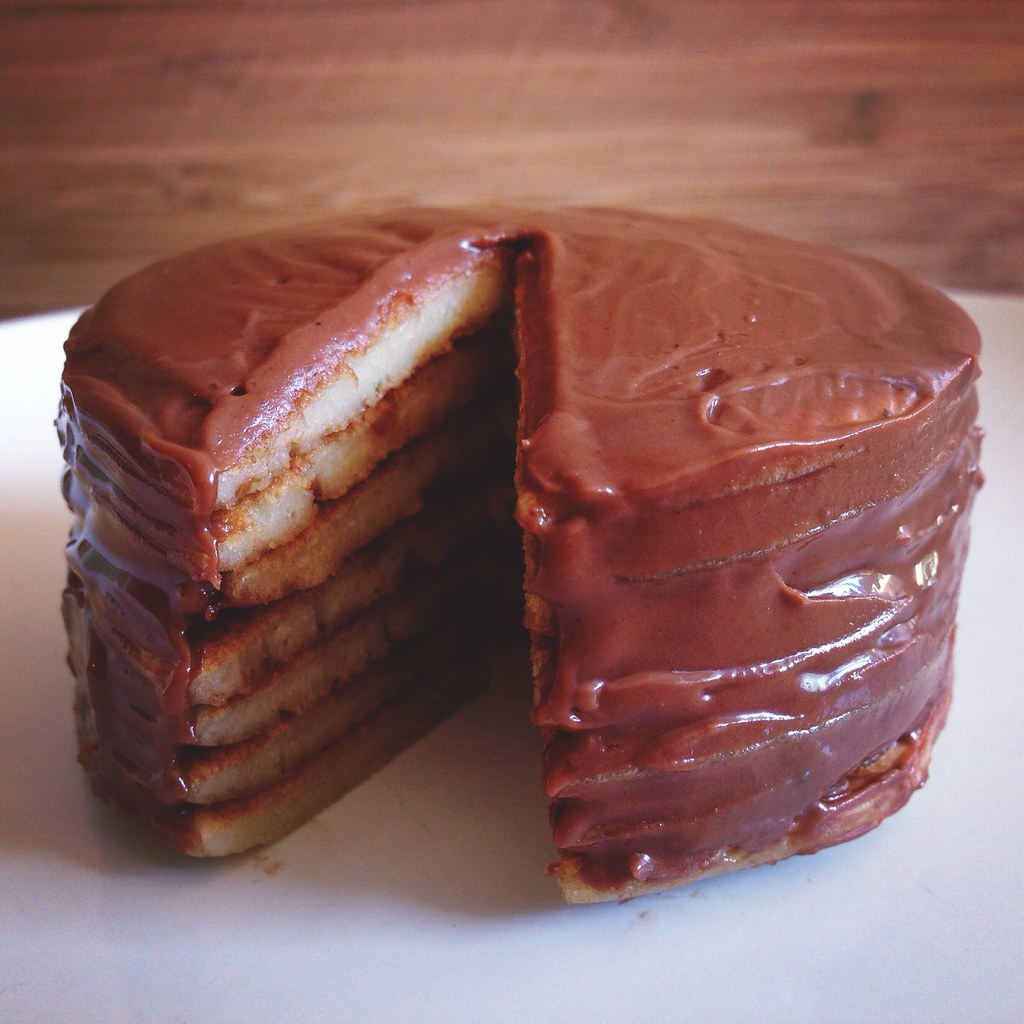 I microwaved the Nutella for about 20 seconds so it was easier to spread.  I was able to get a nice glossy coat with the warm Nutella, but it didn’t stick to the sides of the crepe cake very well.  So for the last batch I frosted the outside with room temperature Nutella after stirring it around a bit. 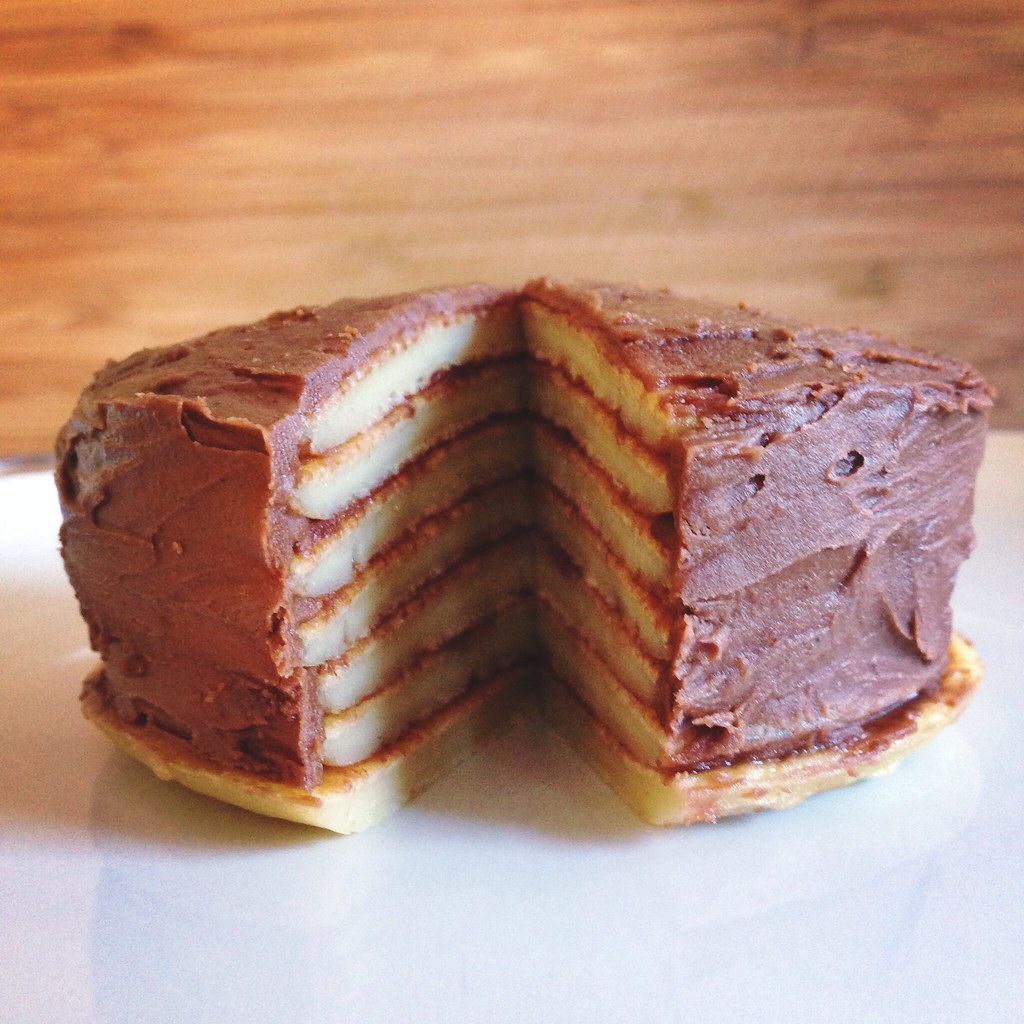 Doesn’t that look a full-sized layer cake?  (Ignore the bottom layer which was too big and stuck out; I shouldn’t have used it.)  I can’t get over how cute these are!  I dream about making a Happiness Cake version with mini-chocolate crepes, passion fruit curd filling, and coffee frosting. 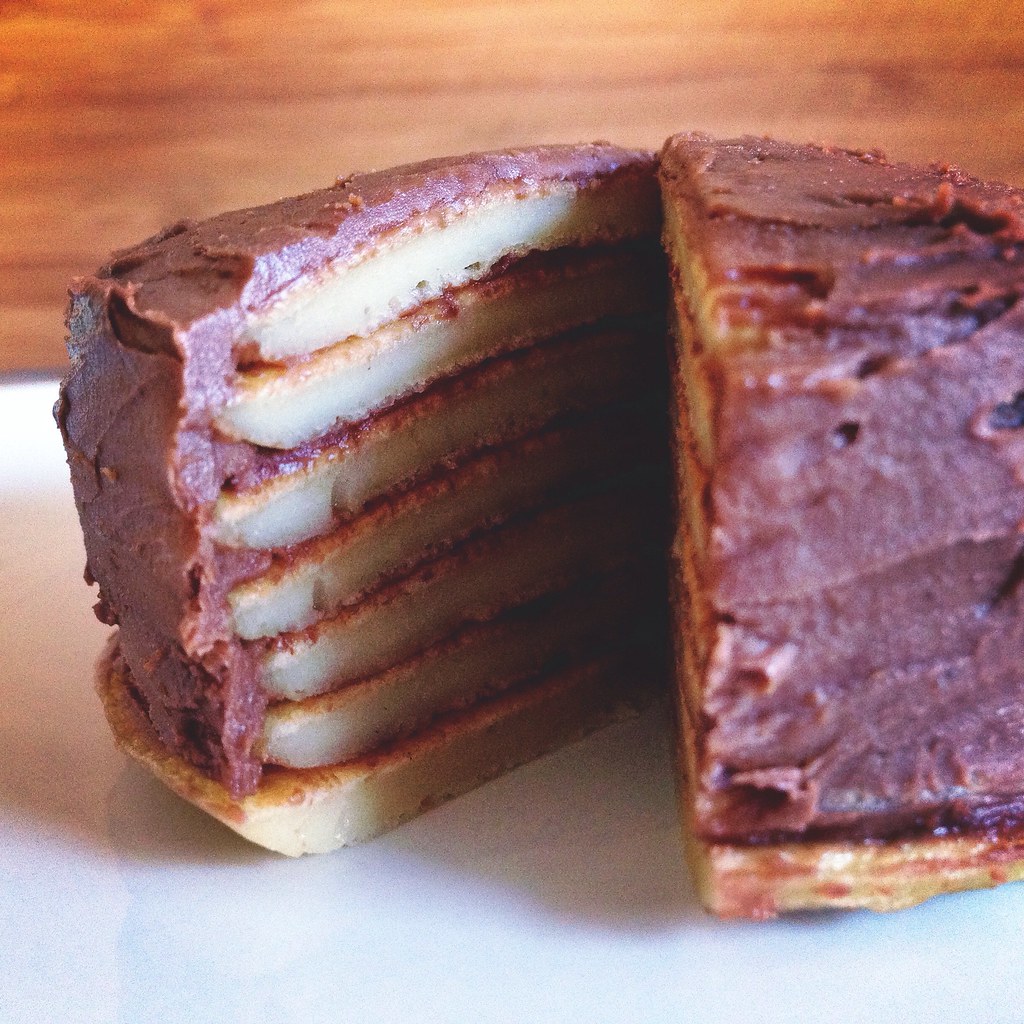 How to Make an American Flag Cake blueberry