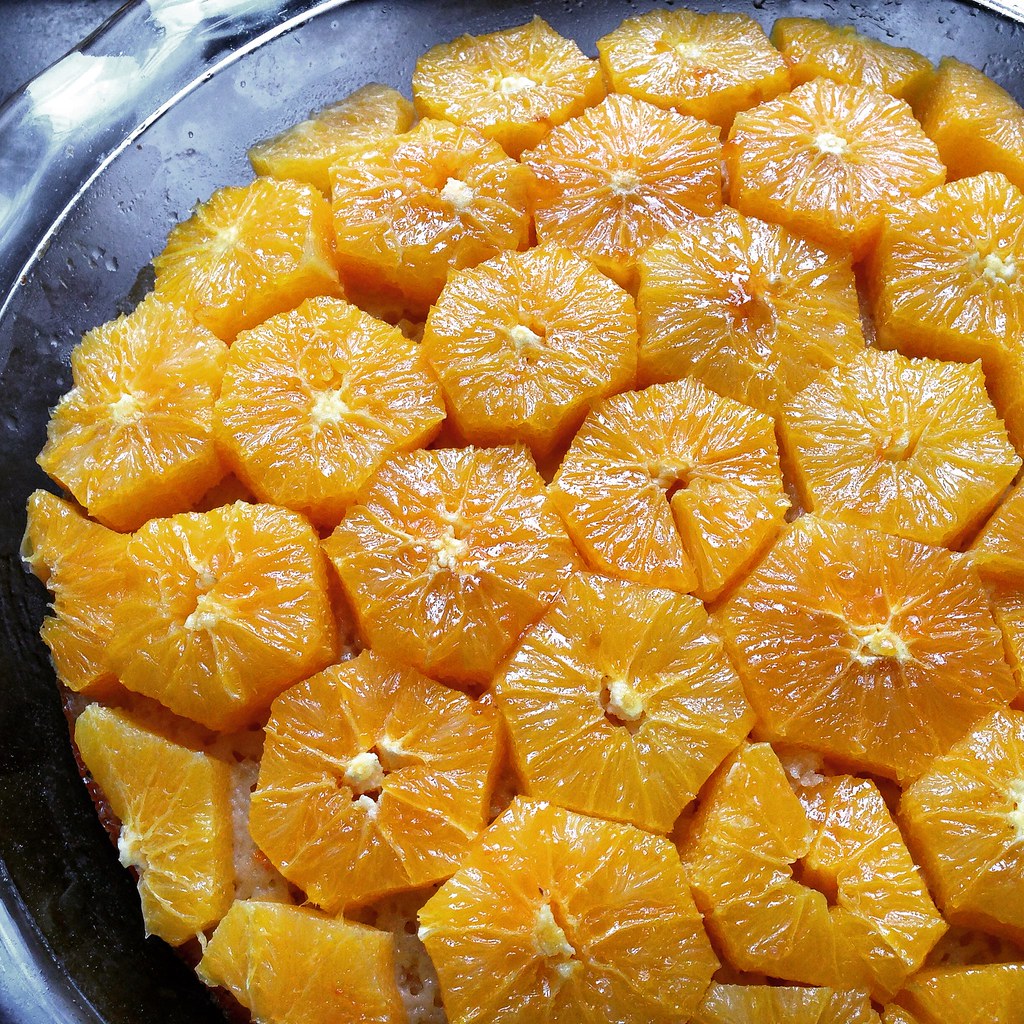 I came across Dorie Greenspan’s Baking Chez Moi cookbook at my local library the other day and borrowed it without even opening it.  I’ve made some of her recipes in the past and totally trust her authority in all things baking, just like I trust Jeni’s in all things frozen.  I was a little disappointed that there weren’t pictures for every recipe in the book, but maybe that’s a good thing because otherwise I’d want to make (and eat) every single last thing in there. 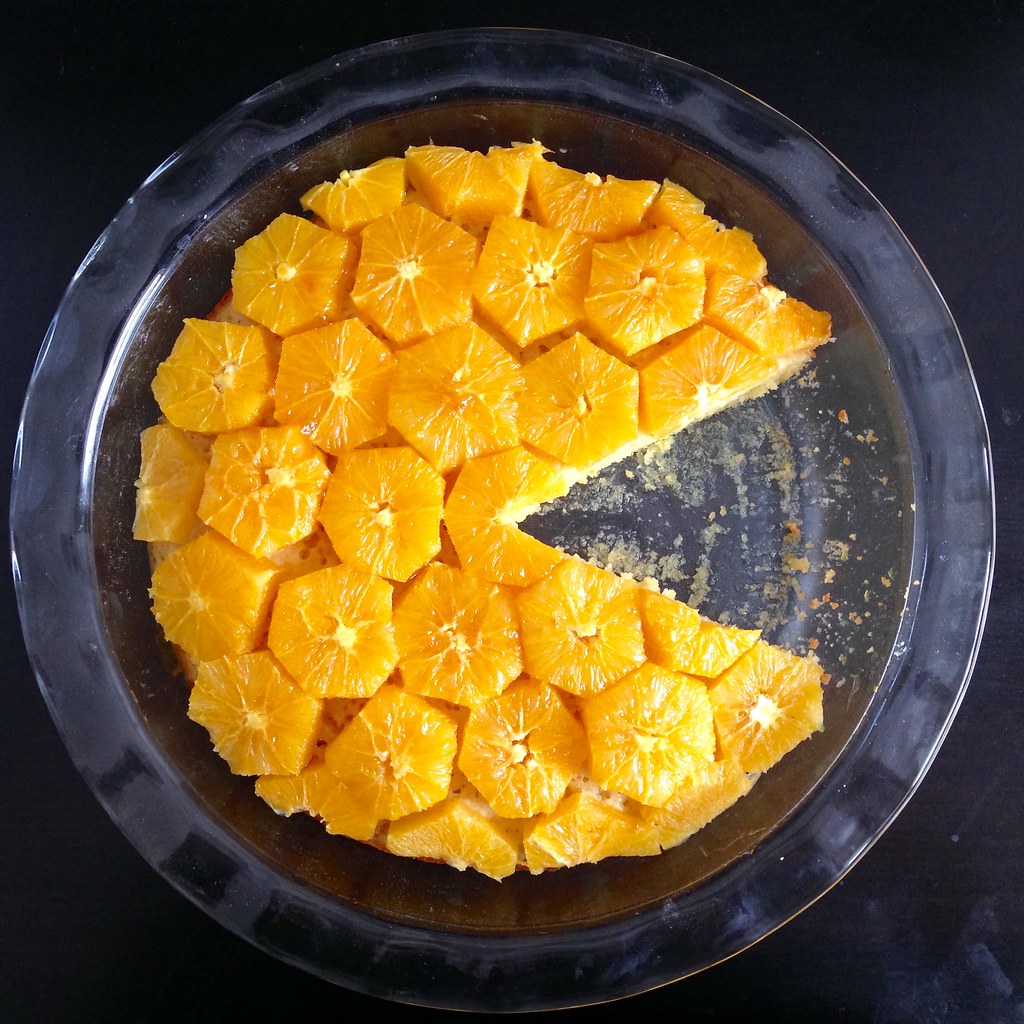 The first thing that caught my eye was this fresh orange cake that had beautiful slices of glistening oranges on top.  As I was currently sitting at home in the midst of the third snowstorm to hit in as many weeks, I desperately needed a reminder of something warm and sunny. 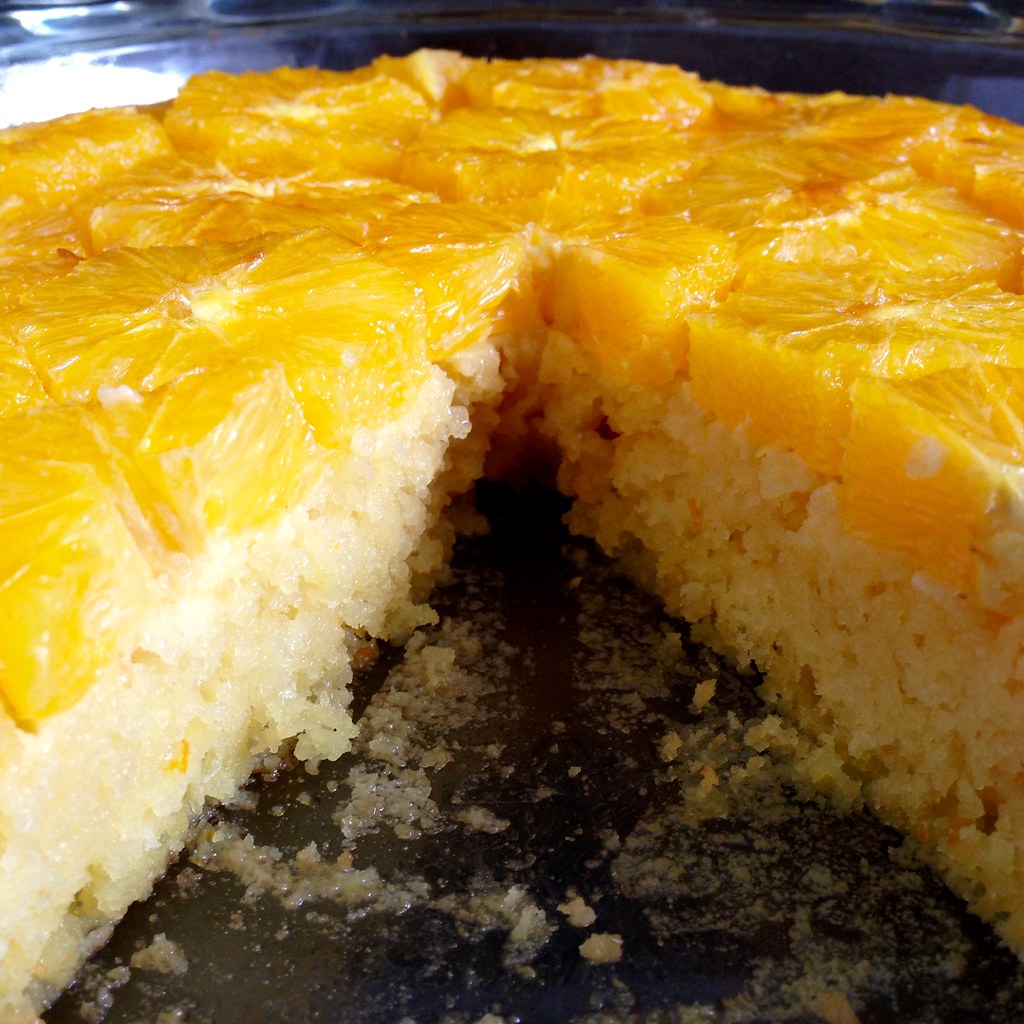 I made just a few adjustments to her recipe; since I didn’t have an 8″ cake pan, I used a pie pan, which was 8″ at the bottom but wider on top.  This just meant more space for the showstopping orange topping.  And after cutting a few of the oranges into her suggested pentagon shape, I realized I was wasting a lot less of the orange if I cut them into hexagons instead.  I think hexagons are easier to arrange together than pentagons anyways (or maybe I’ve just been playing too much Civilization V).  In her recipe, she says you only need 3 oranges to fill the top of your cake, but I found I needed a lot more, like almost the whole bag.  I guess it depends on the size of your oranges, but one way you can estimate how many slices you need is to poach them in a pot the same diameter as the top of your cake.  If you arrange them in a single layer in the pot, you’ll see if you need to keep cutting up more oranges to cover the bottom. 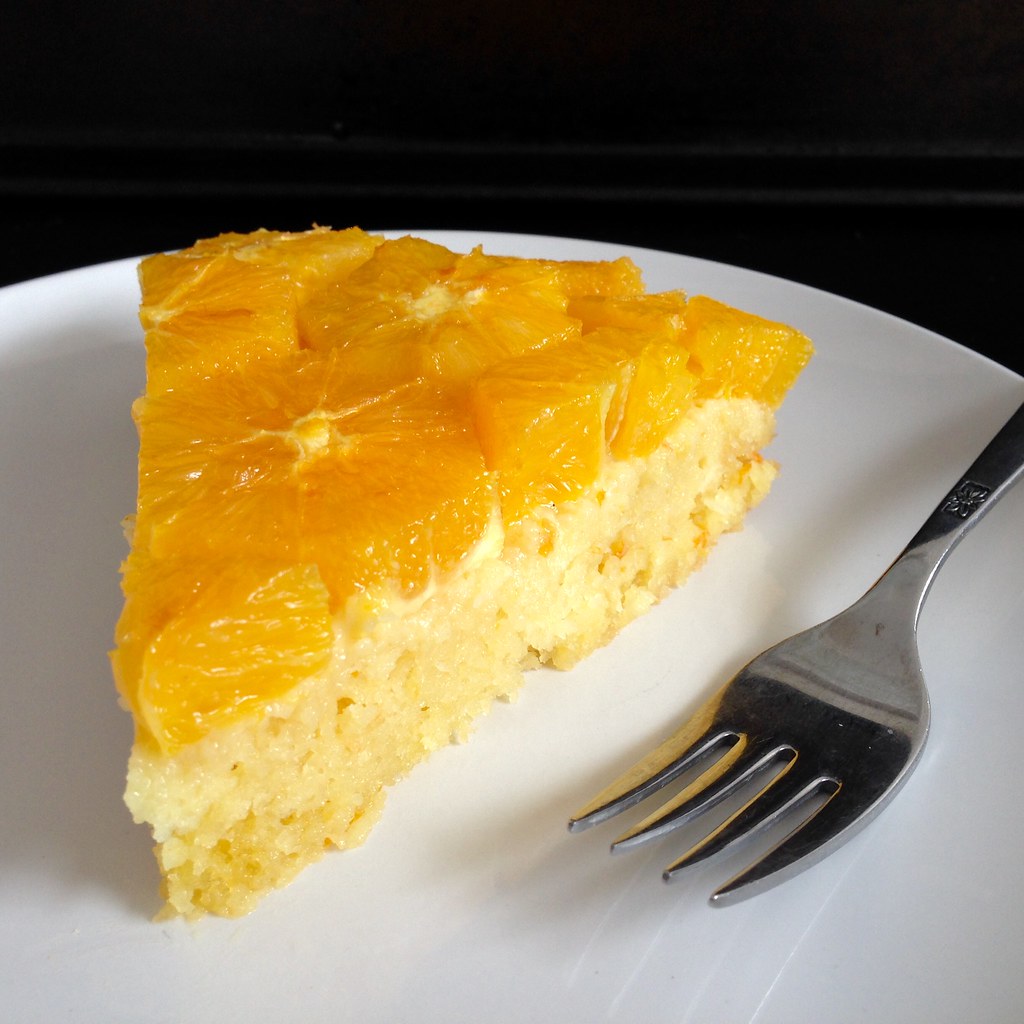 Center a rack in the oven and preheat the oven to 350°F.  Butter an 8-inch round cake pan, dust with flour and tap out the excess. Whisk together the flour, baking powder, and salt in a small bowl. Put the sugar in the bowl of a stand mixer or in a large bowl in which you can use a hand mixer. Grate the zest of the orange over the sugar. Squeeze the juice into a measuring cup–you should have about 1/3 cup, but a little more or a tad less won’t throw things off.

Rub the sugar and zest together with your fingertips until the sugar is moist and fragrant. If you’re using a stand mixer, fit it with the paddle attachment and attach the bowl. Add the butter to the bowl and beat on medium speed for about 2 minutes, until the mixture is smooth and creamy. Add the eggs one at a time, beating for 1 minute after each one goes in, then pour in the juice and beat to blend. Reduce the mixer speed to low and add the dry ingredients, mixing only until they disappear into the batter. The batter may look a little lumpy and grainy, but that’s fine. Turn the batter out into the cake pan and smooth the top.  Bake the cake for 20 to 25 minutes, or until a knife inserted into the center comes out clean.

In the meantime, make the topping.  Cut the tops and bottoms off each orange, stand the orange up and remove the remaining peel by cutting straight down the sides of the orange 6 times, to shape it into a hexagon.  Then turn the oranges on their sides and slice them about 3/8″ thick.

Bring the sugar, water, and cinnamon stick to boil in a medium saucepan, then reduce the heat and simmer for 2 minutes.  Gently drop the orange slices into the syrup and cook over low heat for 3 minutes.  Carefully remove the slices with a slotted spoon; strain and reserve the syrup.

Arrange the orange slices on top of the cake and pour about a 1/2 cup of the poaching syrup over the oranges and cake.  Melt the marmalade and brush it over the fruit.  Cool the cake completely before slicing and serving. 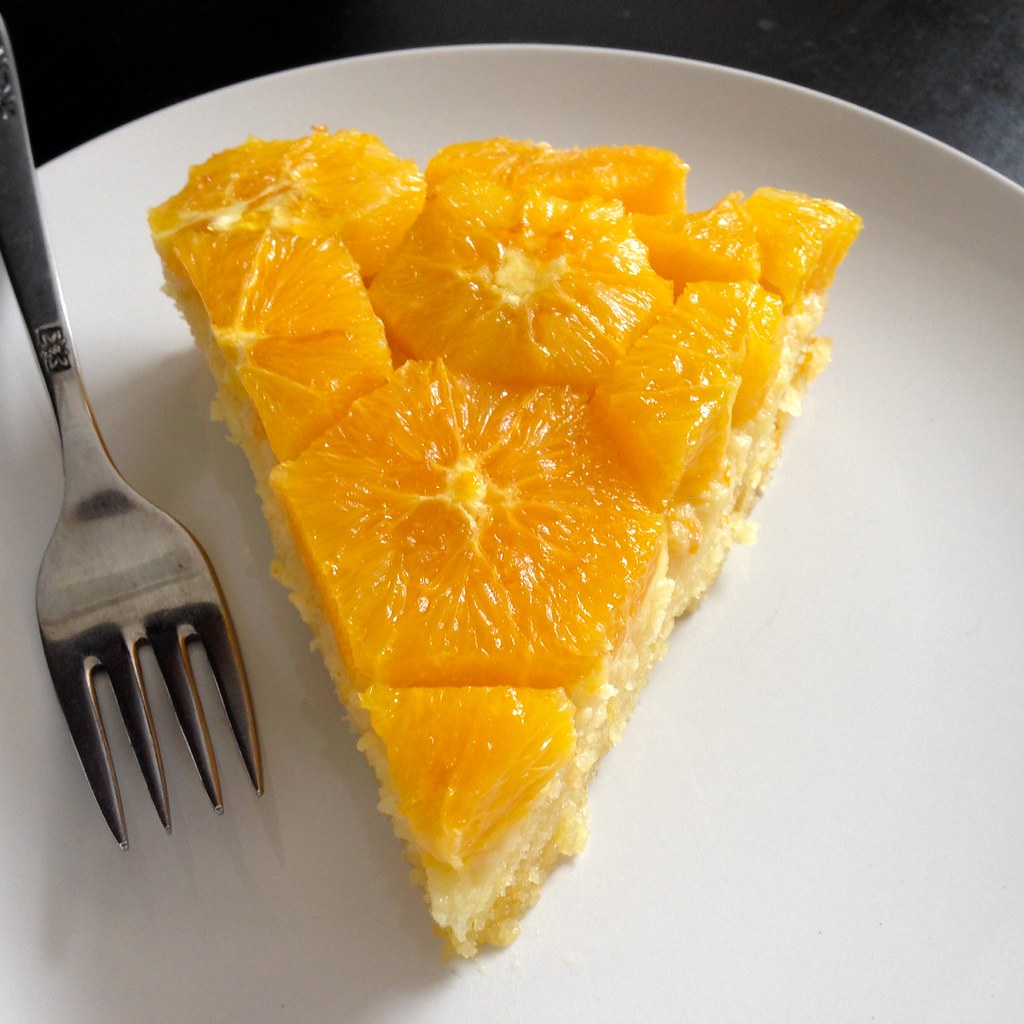