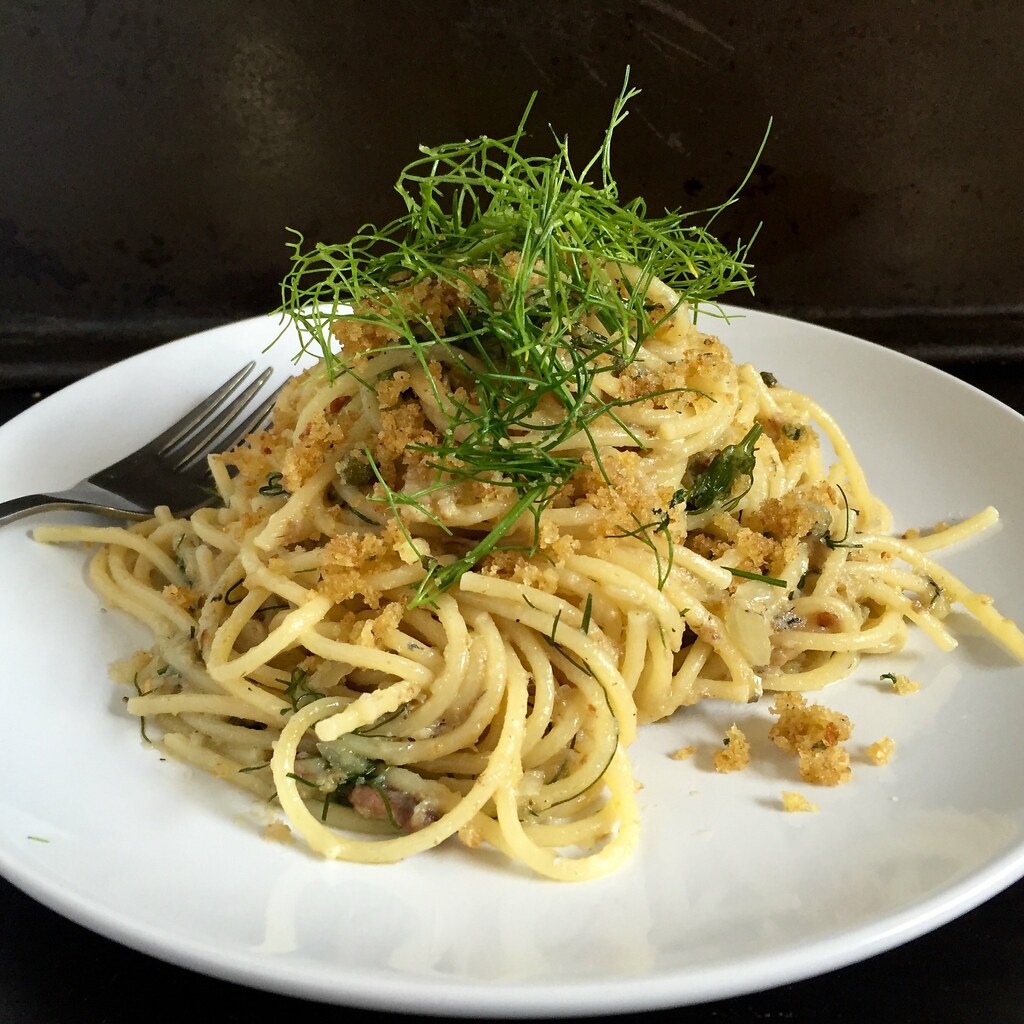 I had the pleasure of joining my cousin in Italy again, this time on a 9 day trip to Sicily.  We started in Palermo and made our way in a counter-clockwise tour of the island.  One of my favorite stops was the geological formation known as Scala dei Turchi just to the west of Agrigento. 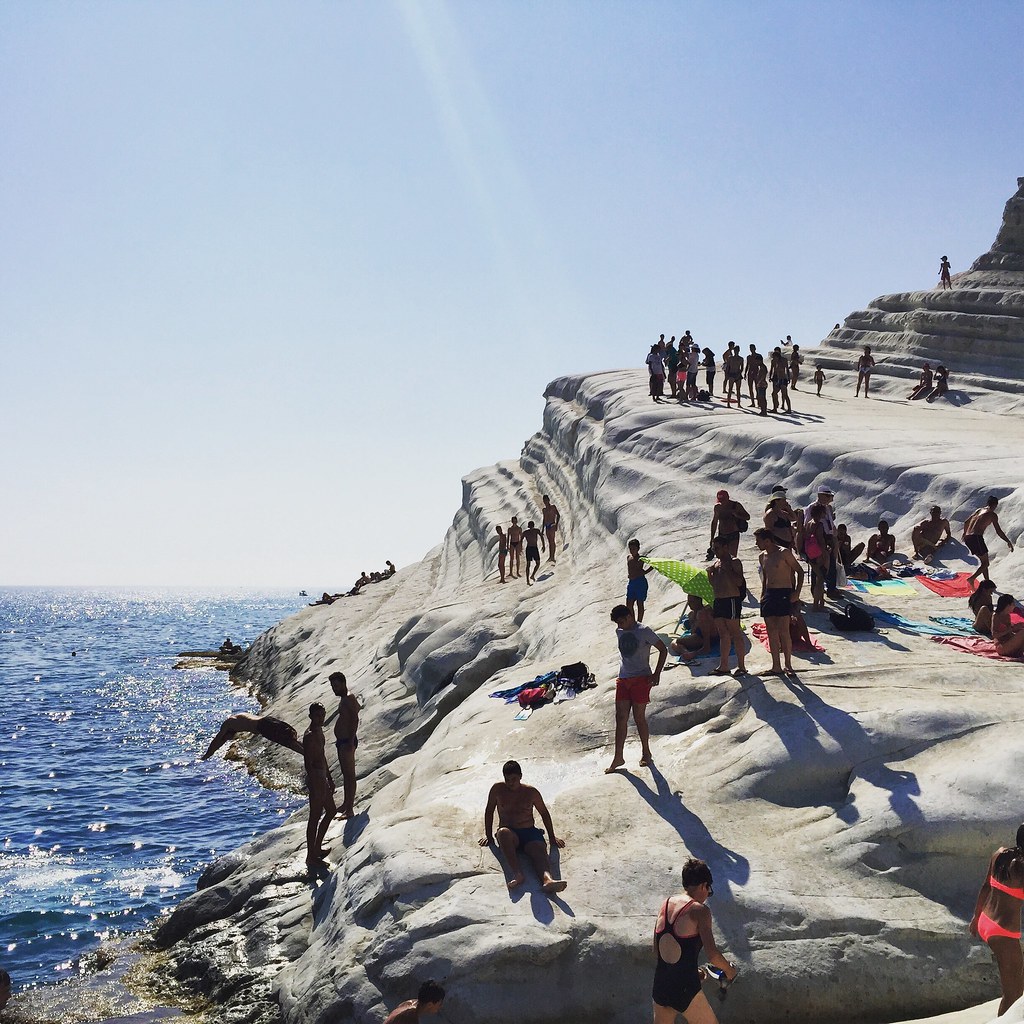 It looks like a milky-white set of steps rising out of the Mediterranean Sea, and it’s completely free to explore.  While I’m really glad I was able to climb it, I do hope that one day soon the government will decide to protect the area since it will likely become quite damaged from all the human activity.  For more pictures of the trip, check out my Instagram feed. 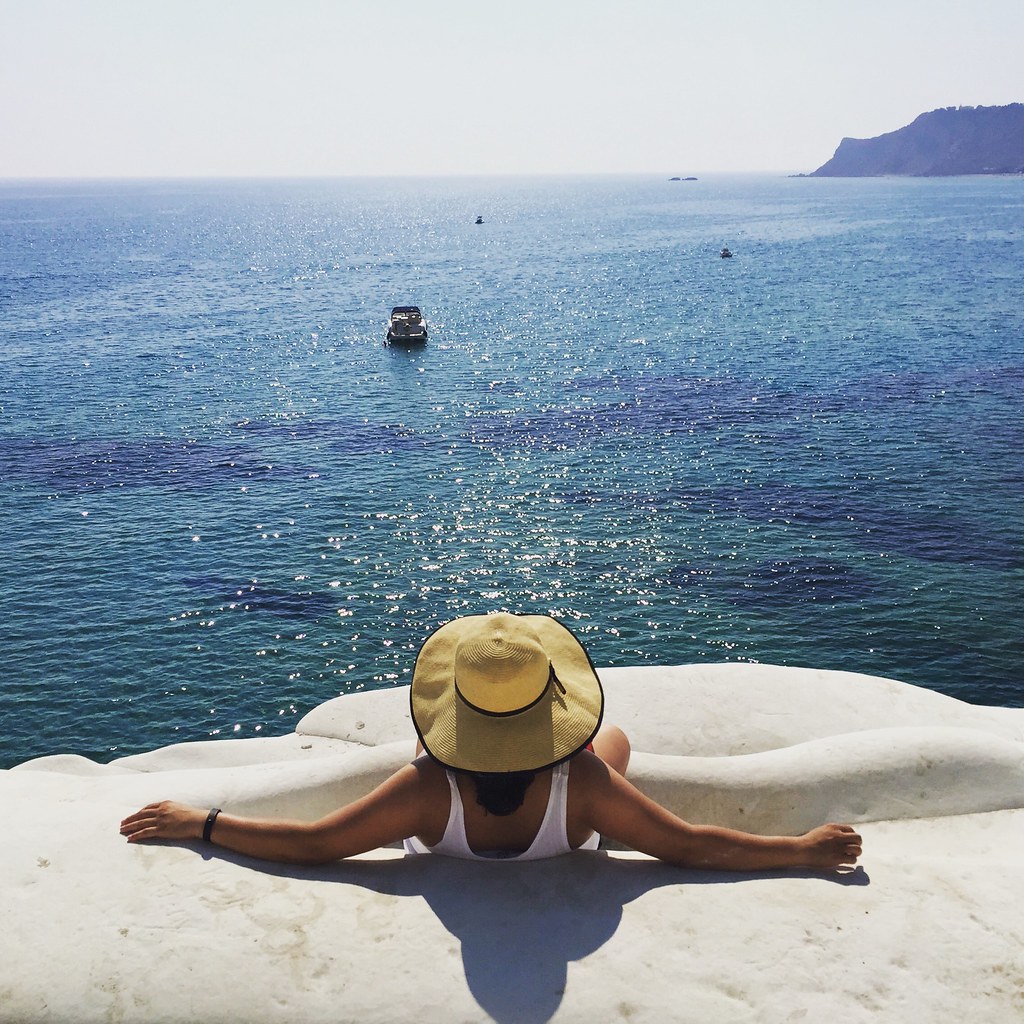 One of my other favorite stops was the UNESCO world heritage Baroque town of Ragusa.  Not only is it absolutely lovely, it has some of the best restaurants on the island including the 2 Michelin-starred Ristorante Duomo.  We were able to have a 7 course lunch there for only 45 euros (that’s like $50 with the recent exchange rate)! 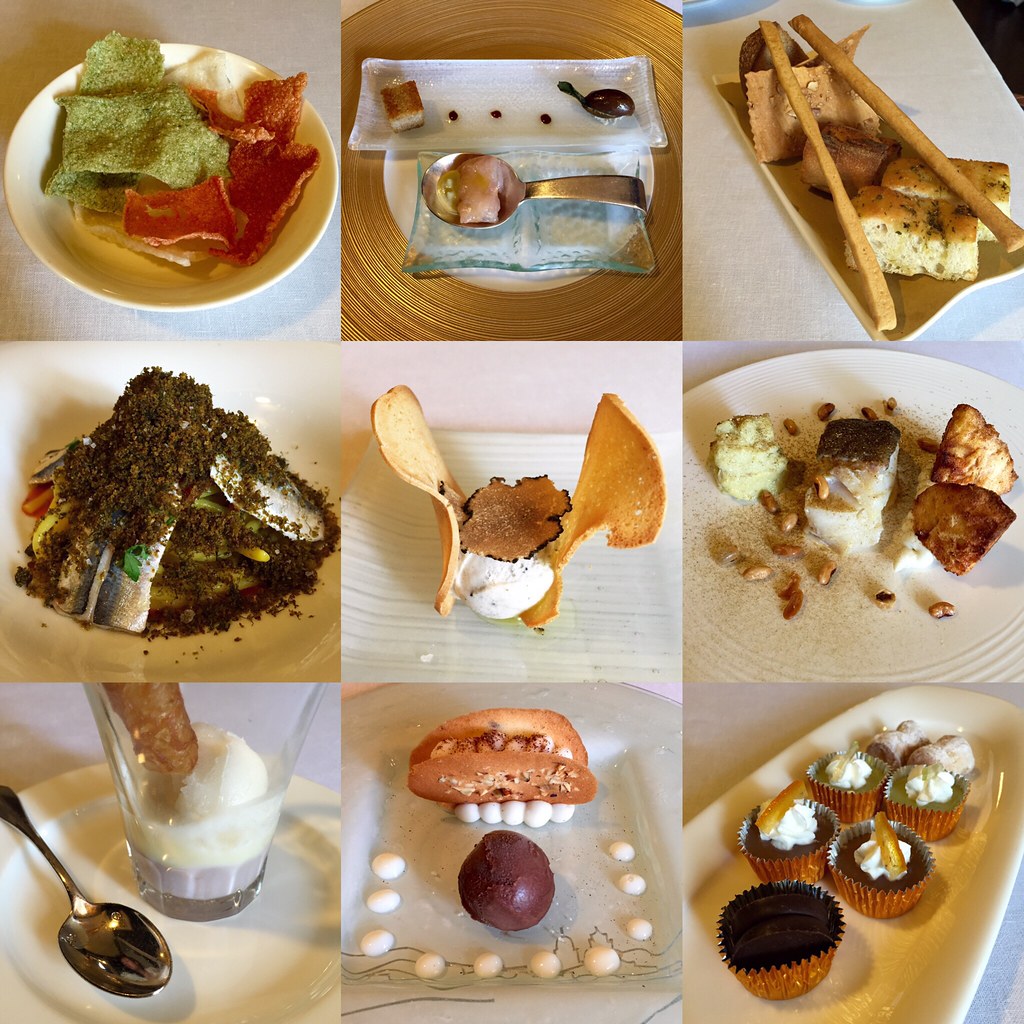 The pasta course was their take on a traditional Sicilian dish:  pasta con le sarde.  From what I remember the waiter saying, they used homemade saffron spaghetti with olive oil poached sardines and bread crumbs with wild fennel.  The version I made uses dry spaghetti from a box and canned sardines, but it’s still pretty good, especially if you like sardines. 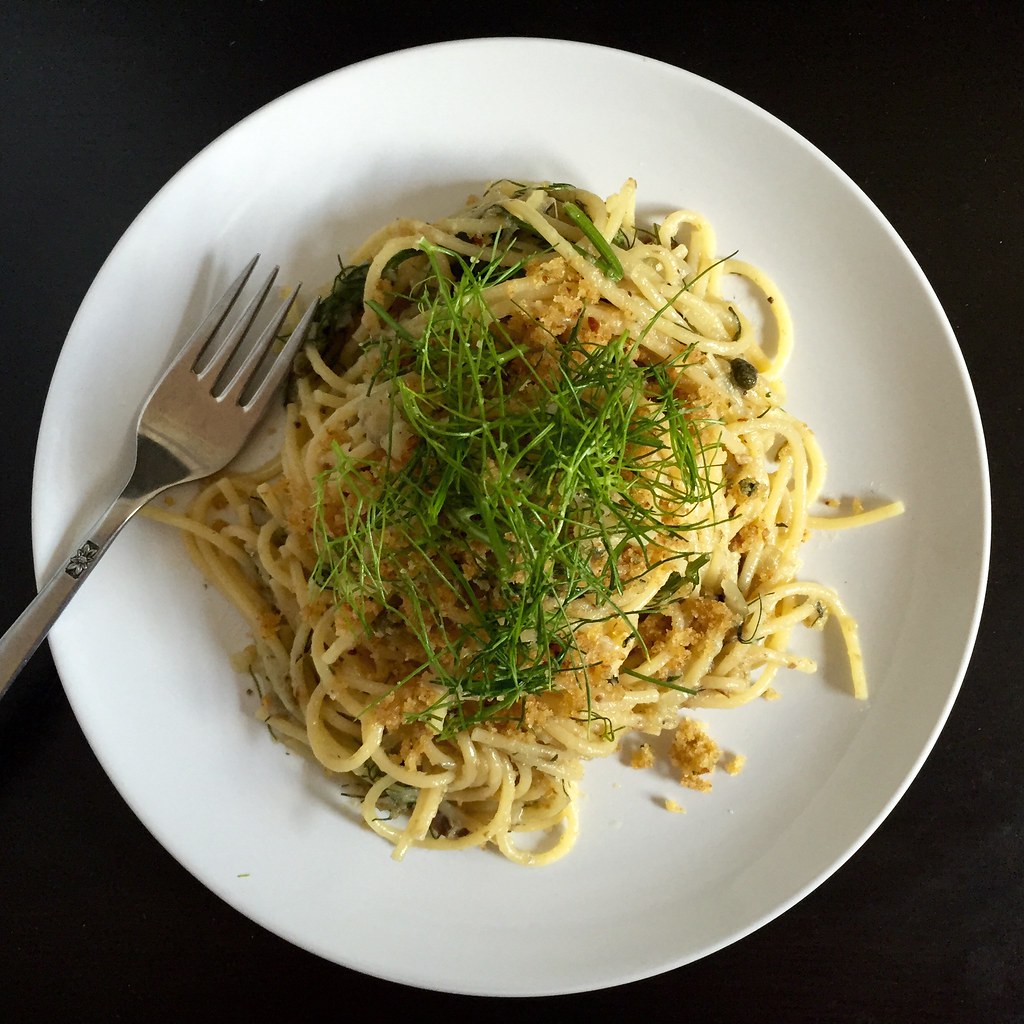 Combine the raisins, red pepper flakes, and wine in a small bowl and set aside.

In a heavy skillet, heat 1/4 cup of olive oil over medium-low heat.  When hot, add the fennel bulb, onion, and garlic.  Season with salt and cook, stirring occasionally, until the fennel is tender, about 25 minutes.

In the meantime, melt the butter in a small pan and add 1 tablespoon olive oil.  Add the bread crumbs and cook until golden brown.  Set aside.

Bring a large pot of salted water to a boil.

When the fennel mixture is ready, add the wine mixture and sardines, breaking them into pieces.  Bring to a boil and gently simmer for 10 minutes.

Add the pasta to the boiling water and cook according to the instructions on the box until al dente.  Strain and return the pasta to the pot set over low heat.  Fold in the fennel-sardine mixture.  Toss in the remaining 2 tablespoons of olive oil.  Add 3/4 of the fennel fronts, the pine nuts, capers, and 1/4 of the bread crumbs.  Season to taste with salt and pepper.

Divide the pasta among two plates and sprinkle the remaining bread crumbs and fennel fronds over each.  Serve immediately. 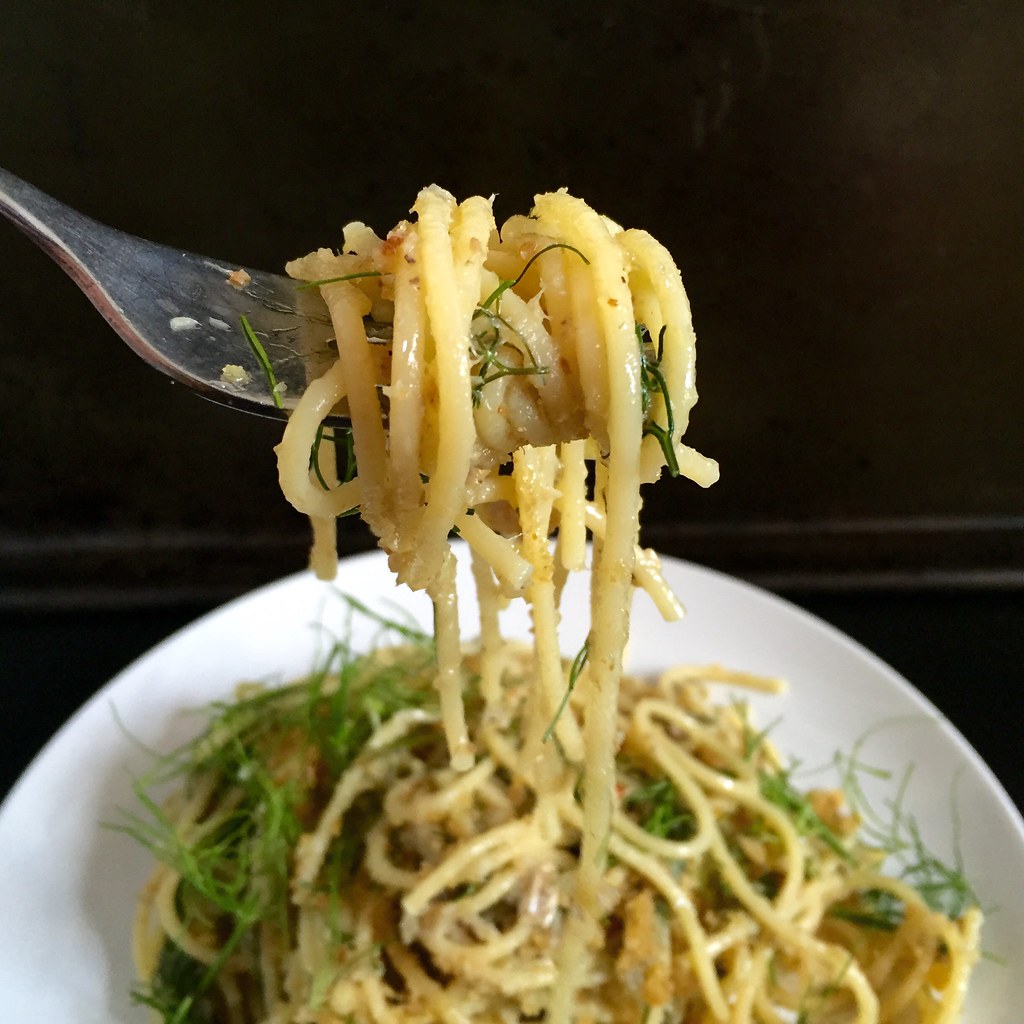