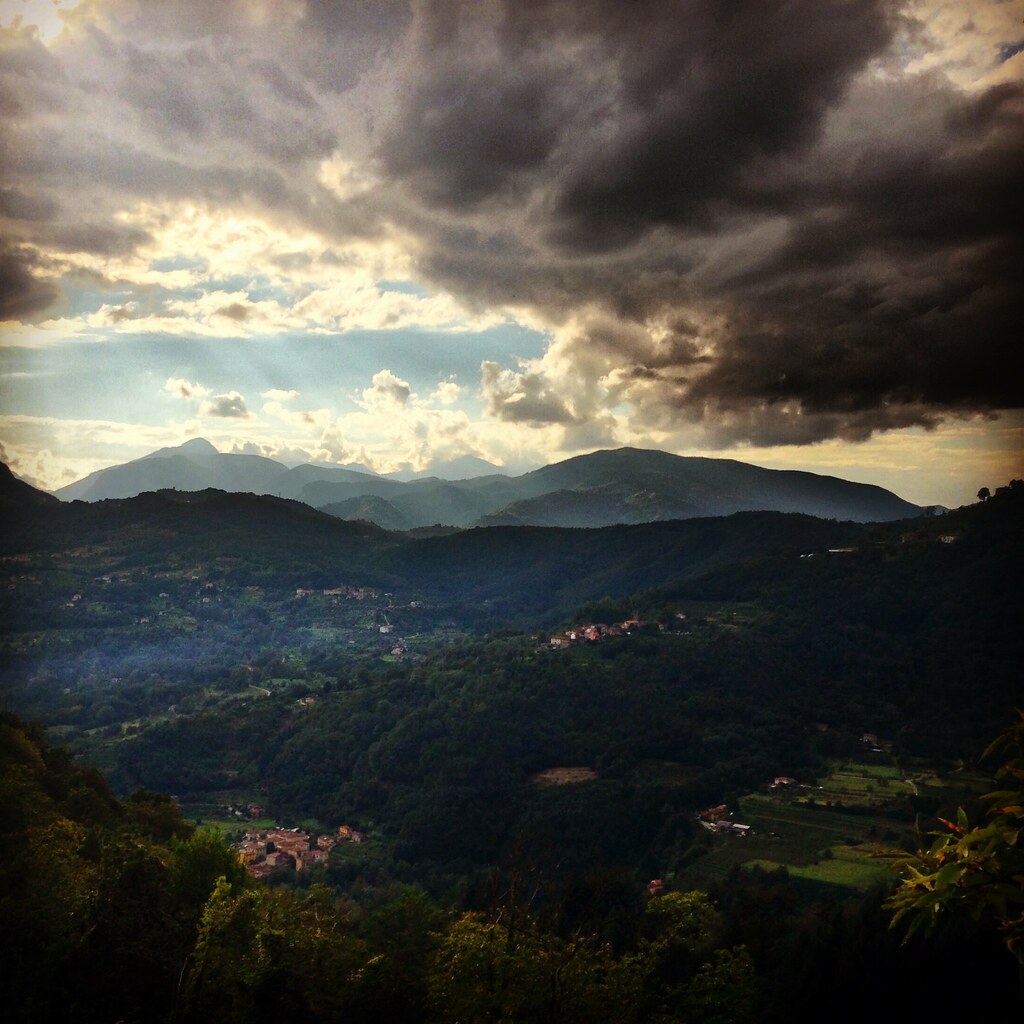 I was lucky enough to go back to Italy again for the third time in 15 months thanks to my cousin, Leslie.  Last time we did Rome and Venice; this time we explored Florence, northern Tuscany (pictured above) and Cinque Terre and were joined by my friend, Sarah Ruth.

My main purpose in Florence was to eat as much good gelato as I possibly could.  To that effect, our first stop after checking into our hotel was to go to Triangolo delle Bermuda to try their artisanal gelato.  Once we realized they also served food, I figured it would be better to eat lunch before getting our gelato, so I ordered the ribollita, a soup I’d heard was a Tuscan specialty. 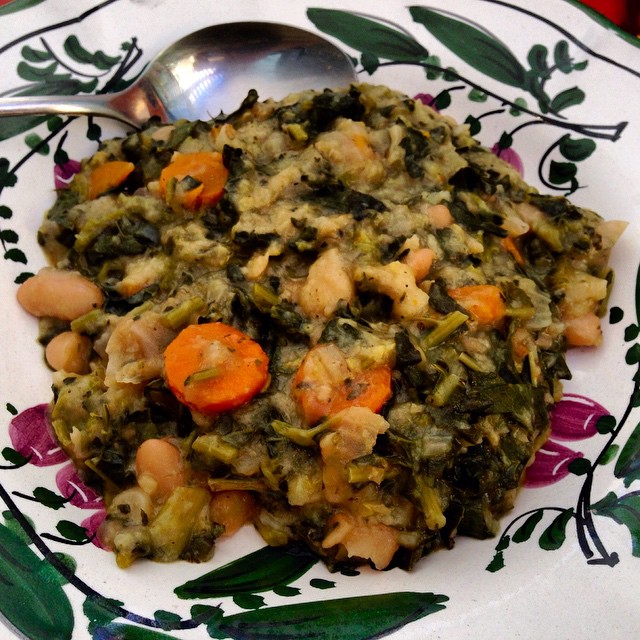 Ribollita translates to “reboiled” and is a result of reheating leftover minestrone-like soup with stale bread to create a thick, hearty potage.  I’ve read there’s actually a three day process where on the second day you layer the leftover soup with the bread and bake it with a layer of thinly sliced red onions on top and then reboil it on the third day.  For simplicity’s sake, I skipped the second day and jumped straight to the reboiling.

Since ribollita is originally peasant food, there’s a multitude of recipes for it (some even argue that since it was created before the advent of tomatoes in Italy, there shouldn’t be any tomatoes in it), but traditionally the main ingredients are always cavolo nero (also called lacinato kale or Tuscan kale), cannellini beans, and stale Tuscan bread.  Since I had recently received collard greens in my Boston Organics delivery, I opted to use that instead of the cavolo nero, which I realize is taking great liberties with the dish, but it still ended up tasting really good, if with a slight Southern twist.   You can also another hearty green (like kale or Savoy cabbage) or a combination of a hearty green and a more delicate green (like Swiss chard or spinach).

I learned that Tuscan bread traditionally doesn’t contain any salt because the city-state of Pisa used to control the salt trade in that region, and the Florentines hated the Pisans.  I found a loaf of bread labelled “Tuscan bread” at my local grocery store, but when I looked at the label, I wasn’t surprised to see salt listed in the ingredients.  It’ll probably be impossible to find a loaf of bread without salt in it outside of Tuscany, so just use a hearty, country-style bread. 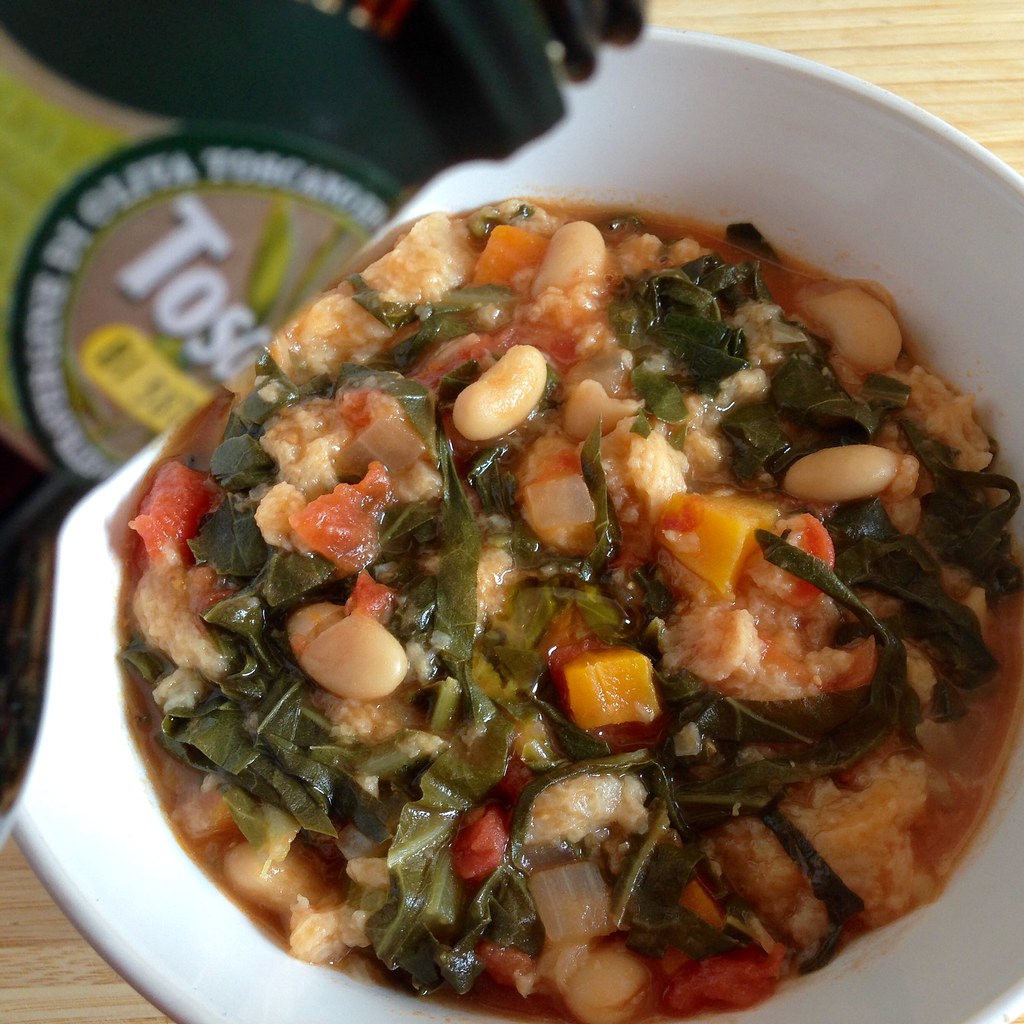 Back to the ribollita at Triangolo delle Bermuda:  the owner, Vitullio, stopped by to talk to us and explained that the soup needed to be topped with some Tuscan olive oil.  He grabbed a green bottle and liberally poured some all over my bowl.  I took a bite, and and it was like the heavens had opened and I could hear harp music playing.  I had never, ever tasted olive oil like that.  It was bold and bright and fruity and really elevated the other flavors in the soup.  I asked Vitullio for the brand so I could buy that exact bottle, but I think he misunderstood because he just started telling us about the Toscano IGP designation for olive oils and how important it was to buy olive oils with that label.  Alas, I never did find out which brand of olive oil that was, but I was now on the hunt for official Toscano IGP olive oils. 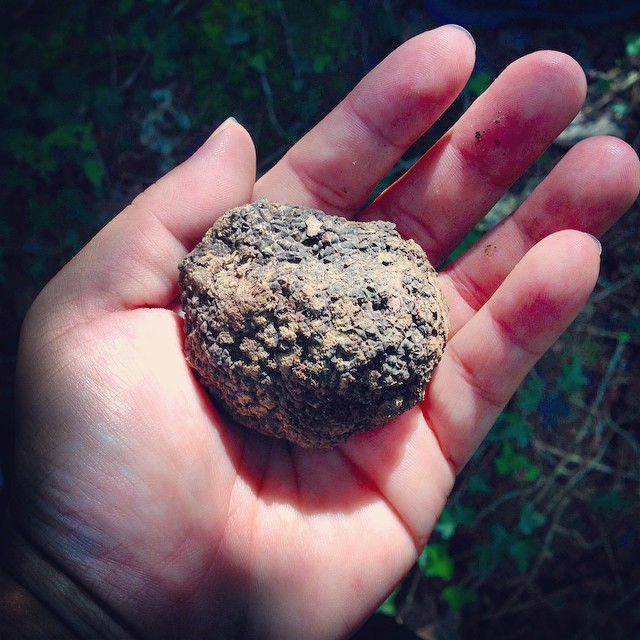 A few days later, I went on a truffle hunting and wine tasting tour, which if you ever get the chance, you should definitely do!  We spent the first part of the tour following Ciocco (short for cioccolata), the truffle hunting puppy, around a hazelnut grove.  He managed to find 5 black summer truffles, which were used in our “light lunch” back at the farm.  The “light lunch” turned out to be a three course meal with a splendid antipasto plate, a main course of truffle pasta, dessert, and lots and lots of local wine.

Afterwards, we drove to Fattoria di San Michele a Torri, an organic farm and winery in the Chianti region, for the wine tasting.  We started off with one of their olive oils, which although beautifully bottled, was way too grassy and spicy for me.  I realized that not all olive oils made in Tuscany were going to taste the same and decided I was going to have to taste test the olive oil before I bought one. 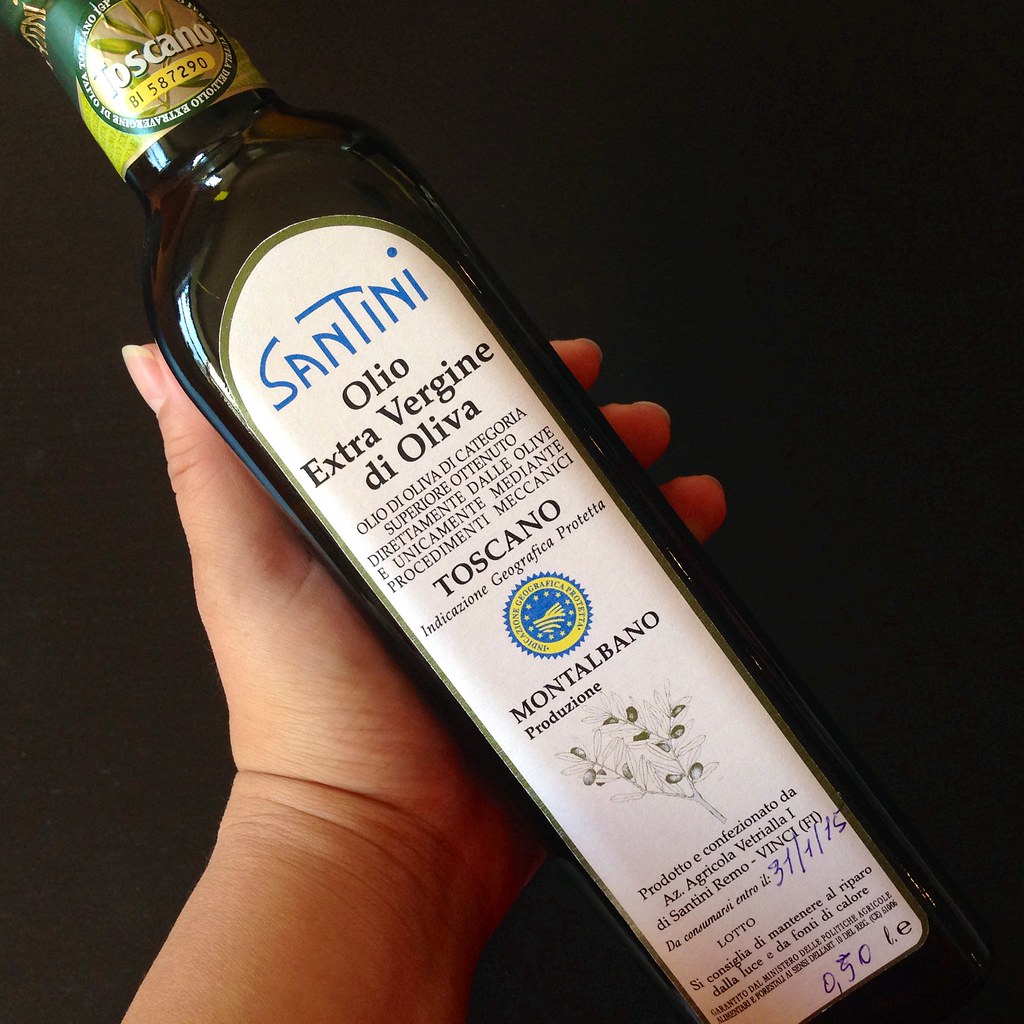 Luckily, I had a chance to do so in the town of Vinci (Leonardo’s birthplace).  I ended up picking up this Santini, which although fruity, was a little milder than I remember that first olive oil being.  All this is to say that not all olive oils are the same, and you should try to find one that you really like to use as a finishing oil. 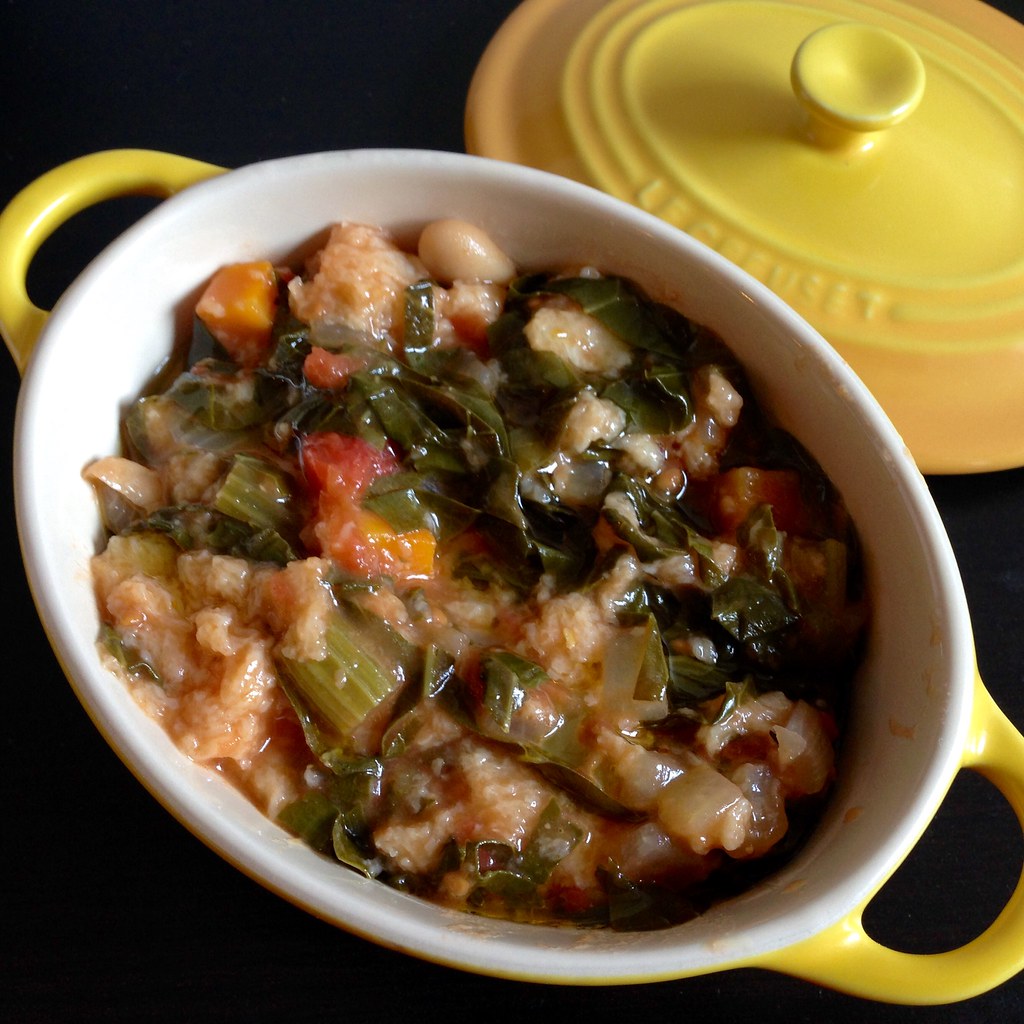 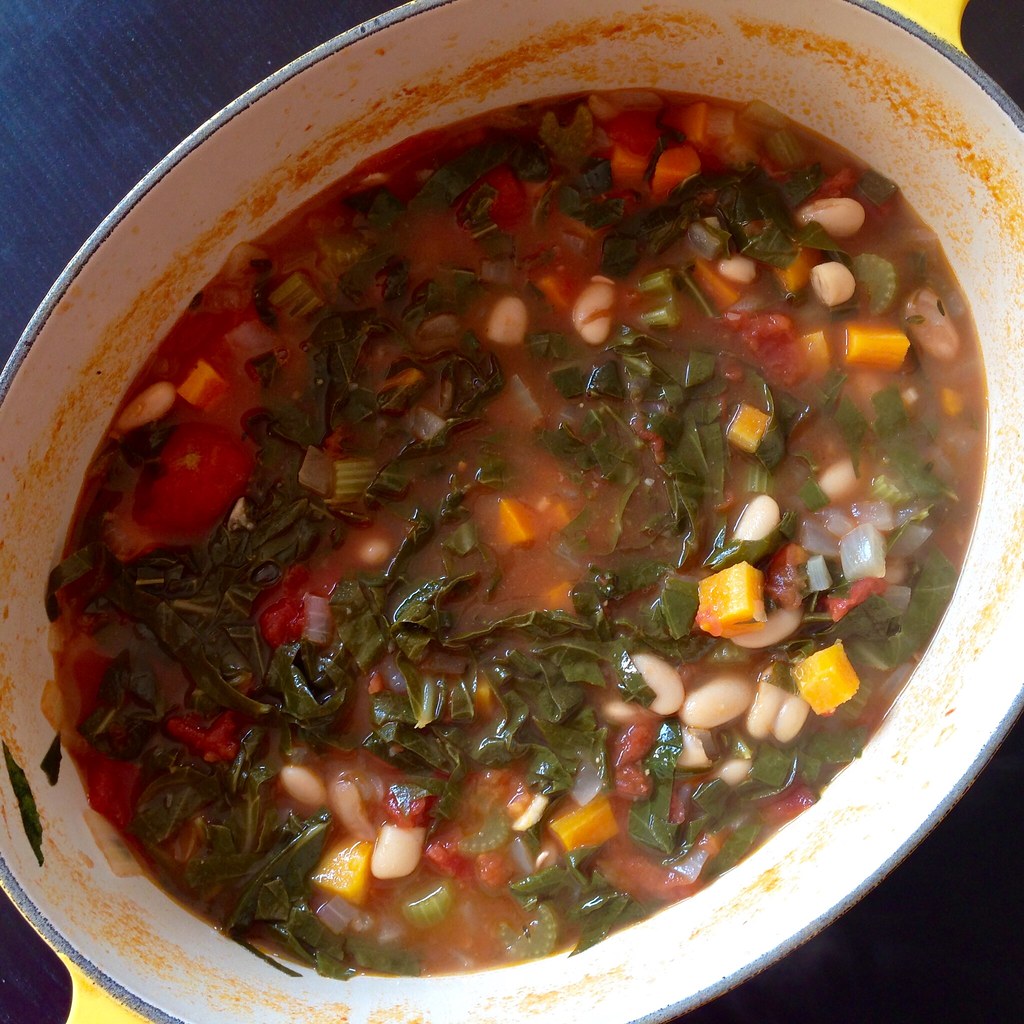 Add the tomatoes and their juices and the sliced greens.  Bring to a boil and keep stirring until the greens are wilted and cooked down.  Add the beans and enough water to just cover all the vegetables, about 3 cups.  Bring to a boil and then lower the heat and simmer until all the vegetables are tender.  Salt and pepper to taste.  You can serve the soup at this point with some fresh Tuscan bread.  Refrigerate the remaining soup. 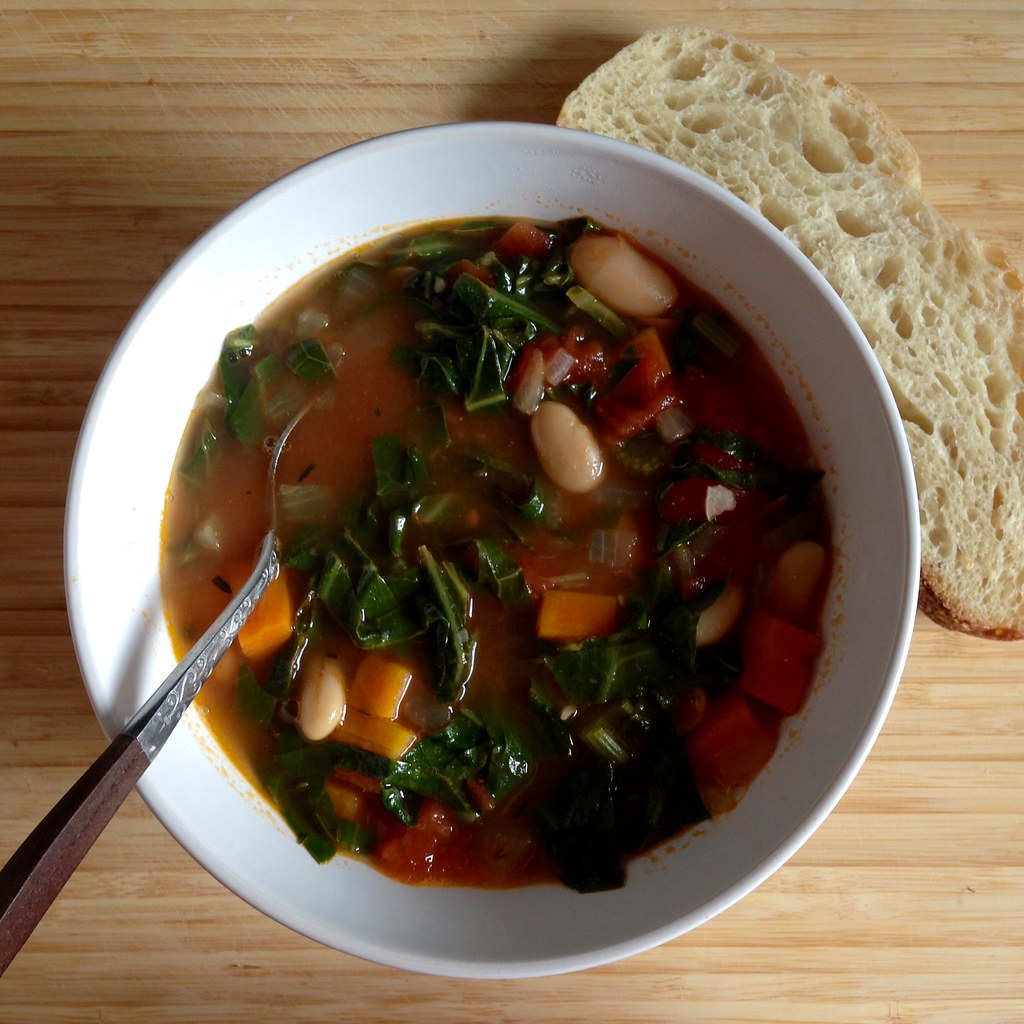 Day 2:  Tear the bread into small pieces and add to the soup.  Bring to a
boil again, and then simmer for 30 minutes, stirring to dissolve the
bread into the soup. 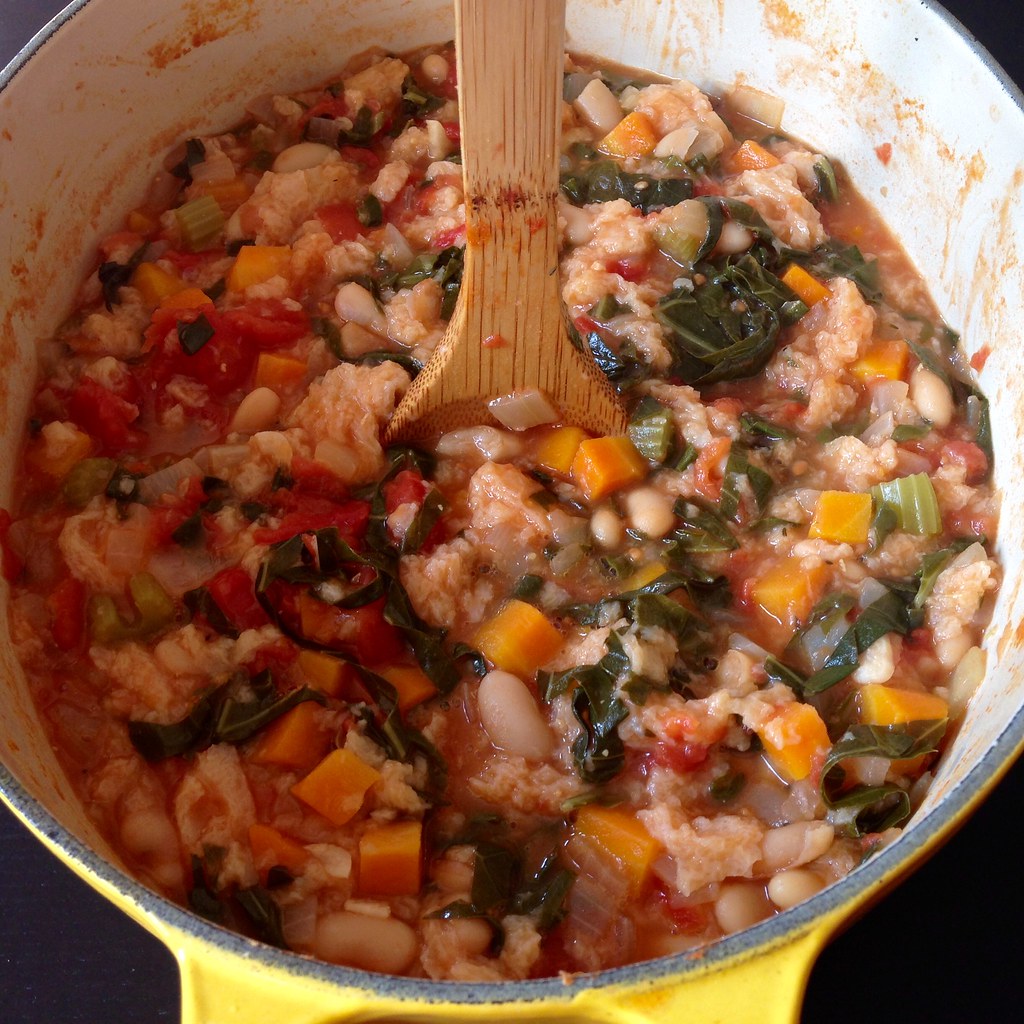 It should be thick enough that you can stand a wooden spoon in the soup.  Ladle the soup into bowls and drizzle with a generous amount of your favorite finishing olive oil. 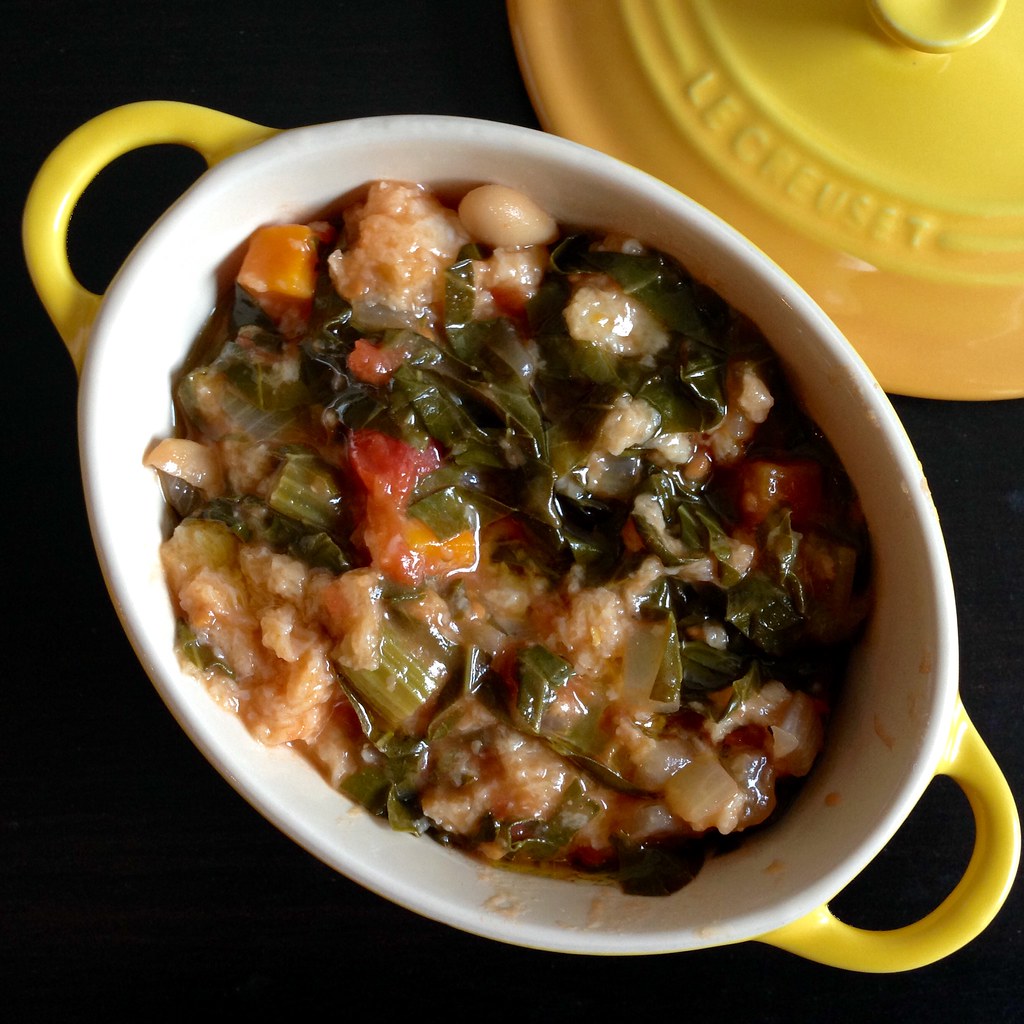 I’ve also read about Ribollita “Da Delfina” where they make a super thick ribollita and then form patties out of the soup and pan-fry them.  I tried doing that with my ribollita on day 3, but it was still a little too watery to keep its shape when I tried to flip the patties.  Still, it was an interesting experiment, distilling all the flavors of the soup into a solid form with the added dimension of the caramelization that occurs during the frying. 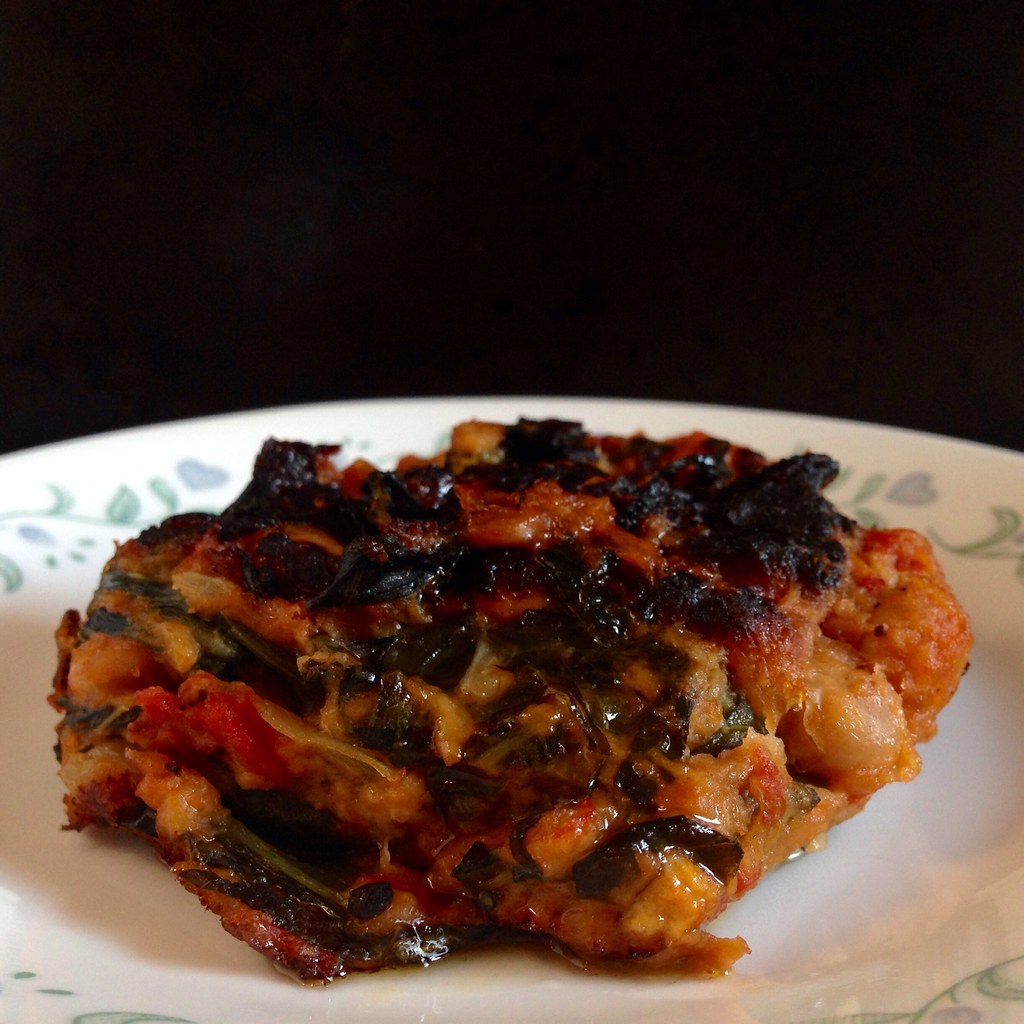