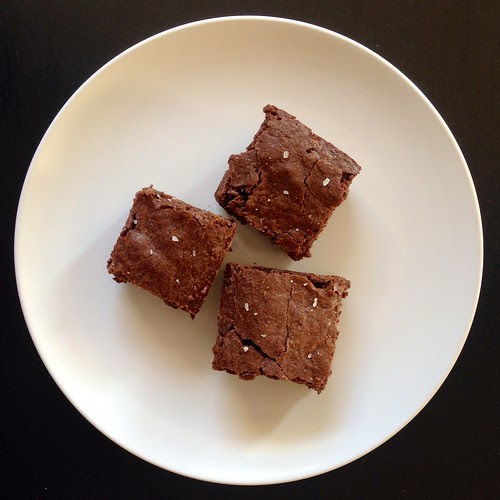 I’ve been looking a while for a good homemade brownie recipe.  I’ve tried making Smitten Kitchen’s favorite brownies, The Kitchn’s extra-dark brownies with sea salt and lime, Coconut & Lime’s bittersweet cranberry brownies, and even Alice Medrich’s Best Cocoa Brownies.  But the thing is, I grew up making brownies from a box, and I haven’t been able to find anything that comes close to the chewy, fudgy goodness of my childhood.  Until now.

I first met Sarah Ruth because she was looking for a roommate, and I just happened to have a spare bedroom in my new home.  Little did I know she was exactly what I needed in my life (and my home) these last 5 months.  To date she’s killed at least 3 bugs for me, listened to me whine about work, laughed at me when I was being silly, accepted my introverted need for alone time, and last but not least, shared with me this recipe.  Sadly, she moved out yesterday, but I’m going to always be super grateful for the time we were able to live together.

These brownies are moist, dense, and super easy to whip up.  They’re called saucepan brownies because you don’t even need to use a separate mixing bowl; you just melt the butter in a saucepan and then mix everything in there before pouring it into a greased baking pan.  I highly recommend using a coarse sea salt because it doesn’t fully melt in the batter, so when you take a bite you’ll get these little nuggets of saltiness that just elevates the rest of the brownie.  If you don’t have any coarse sea salt, you can sprinkle some flaky salt on top of the brownies after it’s done baking for a similar effect. Melt the butter in a saucepan over low heat.  Stir in the cocoa and mix until smooth.  Remove from heat and cool slightly.

Add sugar, vanilla, salt, and eggs.  Stir until combined.  Sift in the flour and baking powder and stir until just combined.

*If you only have unsalted butter, add another 1/2 teaspoon of salt to the batter.

Next:  Grilled Cheese Egg in a Hole