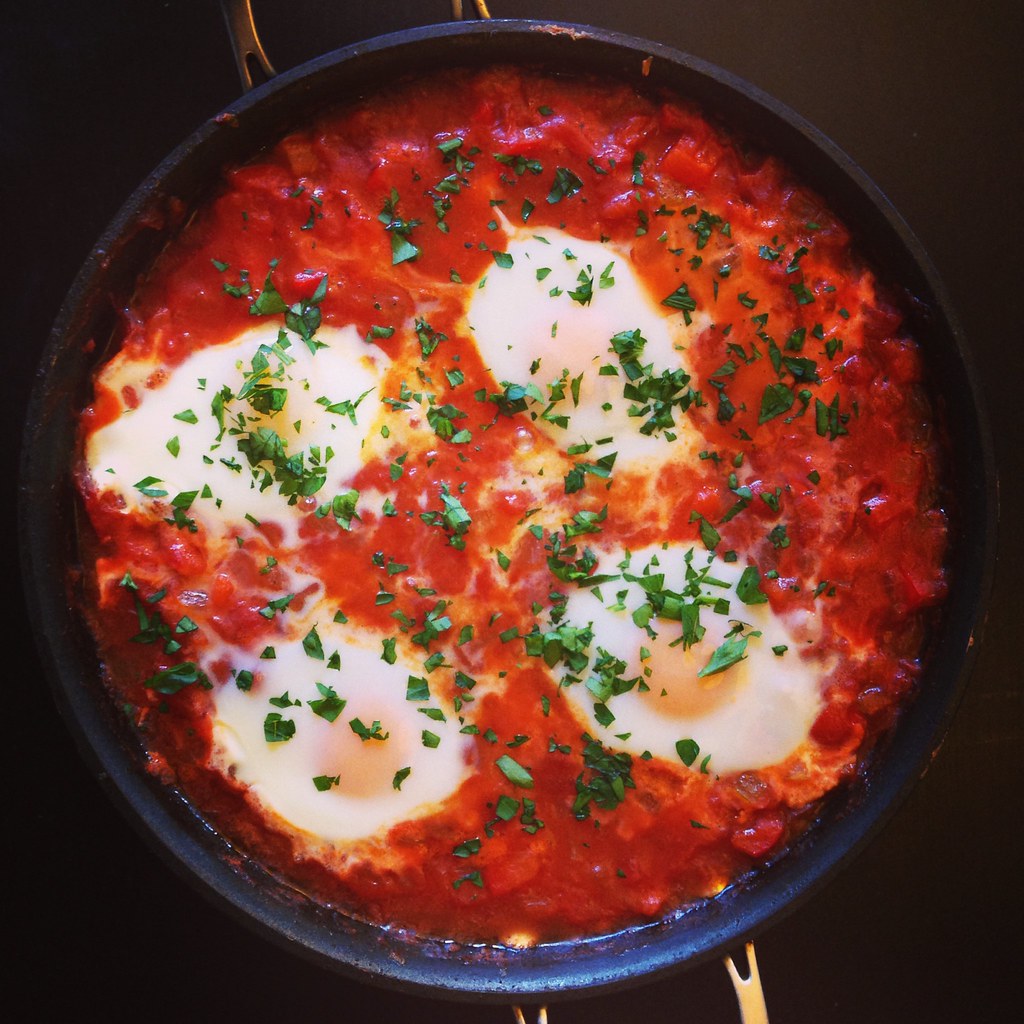 I had shakshuka for the first time in Israel, so when I decided to make dinner for some friends who had just returned from there, it was the first thing I thought of to make.  It’s basically eggs poached in a spicy tomato sauce, and I posted a pizza version of it before.  Shakshuka is traditionally eaten with bread, but since one of my guests had a gluten sensitivity, so I decided to pair it with polenta instead.  It’s one of those pairings that really made me wonder why I didn’t think of it before.  The polenta is substantial enough to stand up to the flavorful tomato sauce, but creamy enough so that you can eat everything with a spoon.  And the best part is, I was able to get the timing down so that you can start both roughly around the same time and have them done at about the same time.

I based my shakshuka recipe on the one from The New York Times and cooked the polenta using the “no stir” instructions from Marcella Hazan (she of the legendary butter tomato sauce fame).  I found that a good way to “chop” the canned tomatoes is to take kitchen shears and cut the tomatoes up in the can.  That way you don’t have to worry about getting tomato juices dripping and squirting everywhere if you used a cutting board.  I didn’t have any cayenne pepper on hand, so I substituted some hot chili powder and red pepper flakes.  I really liked the addition of the feta, but you can leave it out if you want a dairy free dish (just add a little more salt or adobo seasoning to make up for the loss in flavor). 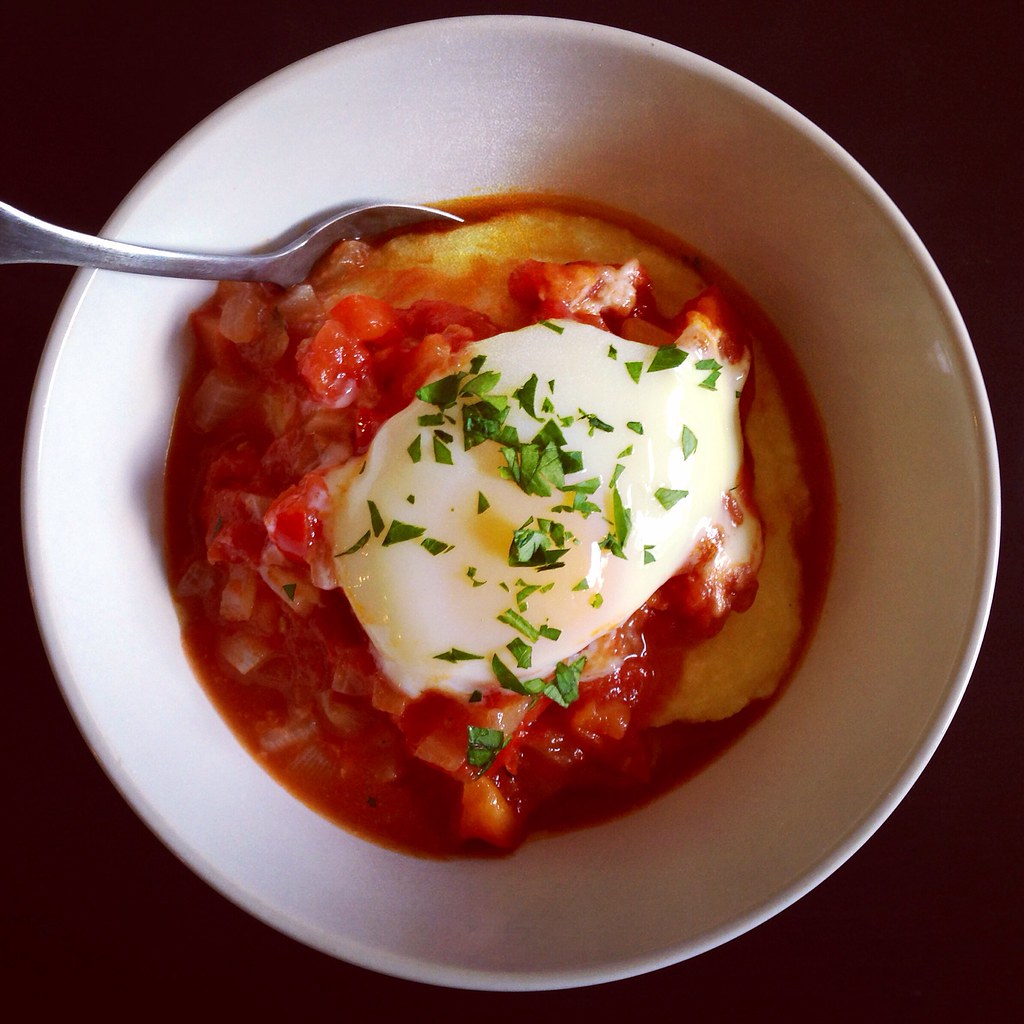 Preheat oven to 375°F.  Start boiling the water in a large pot.

Heat oil in a large skillet over medium-low heat.  Add the chopped onions and bell pepper.  Cook gently until very soft, about 20 minutes.

In the meantime, once the water is at a rolling boil, start whisking the water and pouring the polenta in in a steady stream.  Turn the heat down to low and continue stirring until the polenta has thickened enough that it doesn’t settle back to the bottom when you stop stirring, about 1-2 minutes.  Cover and stir every 10 minutes for 30-40 minutes.

Add the garlic to the onions and peppers and cook until tender, about 1 to 2 minutes.  Stir in the cumin, paprika, and cayenne, chili powder, or red chili flakes and cook another minute.  Pour in the tomatoes and juices and season with salt and pepper.  Simmer until the tomatoes have thickened, about 10 minutes.  Taste and season with more salt, adobo seasoning, pepper, cayenne, chili powder, or red pepper flakes as needed.  Stir in the feta, if using.

Gently crack the eggs into the skillet over the tomatoes.  Transfer the skillet to the oven and bake until the eggs are just set, about 8-10 minutes.  Sprinkle with parsley or cilantro.

Portion out the polenta into serving bowls.  Spoon the tomato sauce with an egg or two onto the polenta.  Serve warm with hot sauce, if desired. 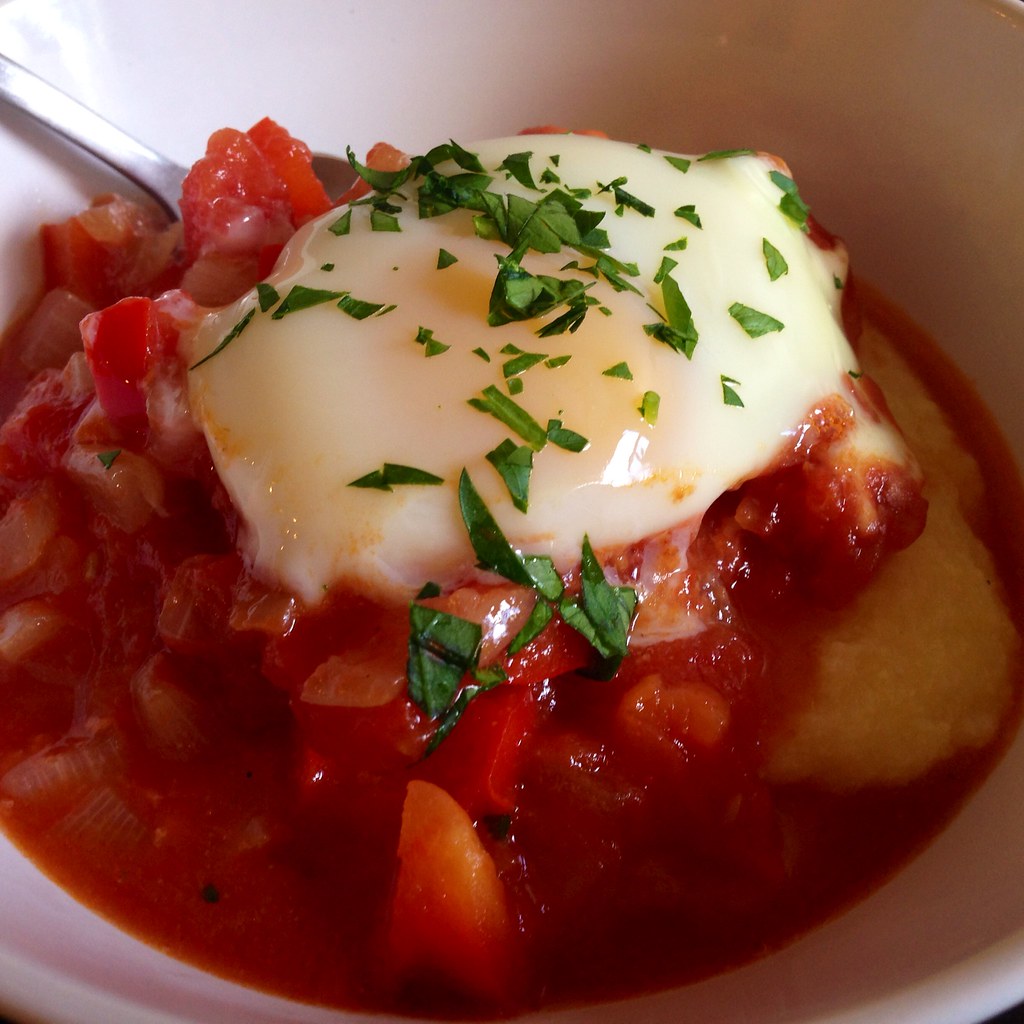 As you can see, I actually didn’t have enough room to fit all the eggs in my skillet.  What I ended up doing was cooking four first, carefully transferring just the eggs to another dish, and then cracking another four eggs onto the sauce and sliding the skillet back into the oven.  During service, after the four eggs were plated, I transferred the remaining eggs back onto the sauce. 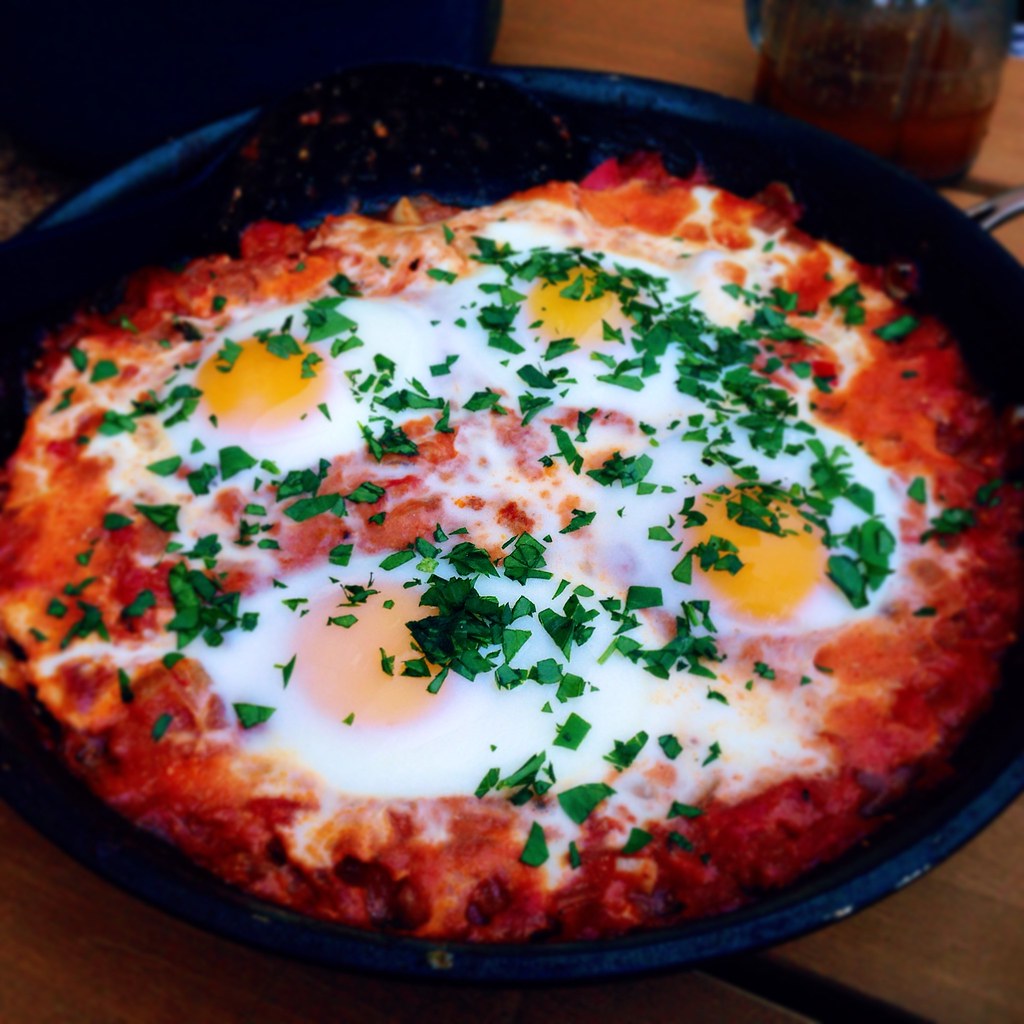