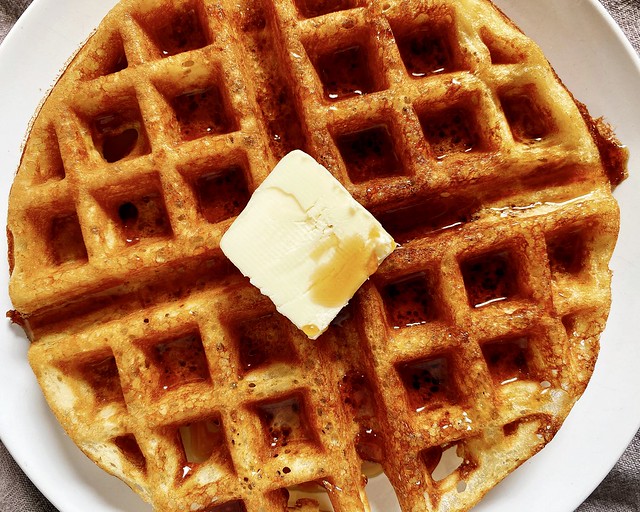 Well this is my first post in almost a year, so you know these are worth making!  I’ve been trying to find a sourdough waffle recipe that I like as much as Smitten Kitchen’s essential raised waffles, but none of the ones I tried really had the flavor or texture I was looking for.

Then two things happened:  my friend Arthur sold me his Belgian waffle maker, and I tried making a half batch of  The Kitchen McCabe’s sourdough Belgian waffles, only I started the first part of the batter late at night and didn’t realize until the following morning that I had only used like a tablespoon of my sourdough starter in the batter instead of a full cup.  But the waffles were AMAZING.  Light and lacy, crispy on the outside and custardy on the inside, with enough flavor that you could eat it without any syrup or butter. 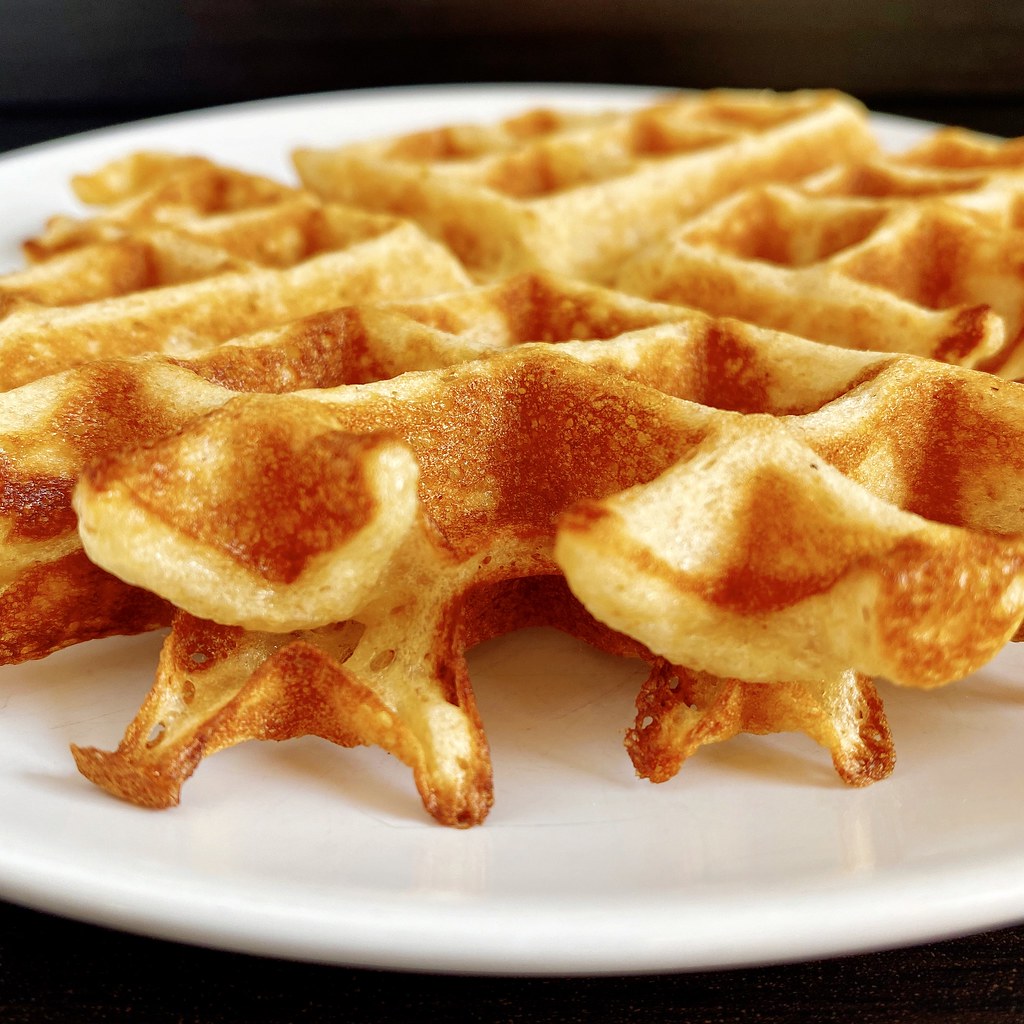 I needed to make sure I could replicate the waffles again, so I asked for testers on my Instagram page, and thankfully quite a few people responded.  Out of ~50 testers, 80% loved the waffles whereas the rest were less impressed.  The chief complaint was that they never got crispy or lost their crispiness too soon.  When I tried the recipe again myself, I noticed the same thing, but I did find that reheating the waffles in my toaster oven made them much crispier.

Another comment was that they were too salty.  I realized that I had listed the kosher salt by volume instead of weight, and since I use Diamond Crystal kosher salt, another other kind of salt was going produce a must saltier waffle.  Lesson learned!

Since such a small amount of starter is used in the recipe, it doesn’t seem to matter much what kind of starter you use, but for what it’s worth, my starter I keep is 100% hydration and fed with half AP flour and half whole wheat flour.  I tested these waffles once with more sourdough starter and once with milk instead of water.  I couldn’t really tell too much of a difference with the former but found the latter to be even softer than the ones with water and with no added flavor.

All in all, I’d say these are the perfect waffles for someone who doesn’t particularly like the flavor of sourdough in their waffles, but has sourdough starter and no milk, haha.  Since such a small amount of starter is used in the batter and it’s such a runny batter, the rise you get is more from the baking soda in the waffle iron than from the sourdough.  It seems to help if you have one of those Belgian waffle makers that you flip too, but people had success with regular waffle irons, too.  This recipe doubles quite easily too, if you have more mouths to feed. 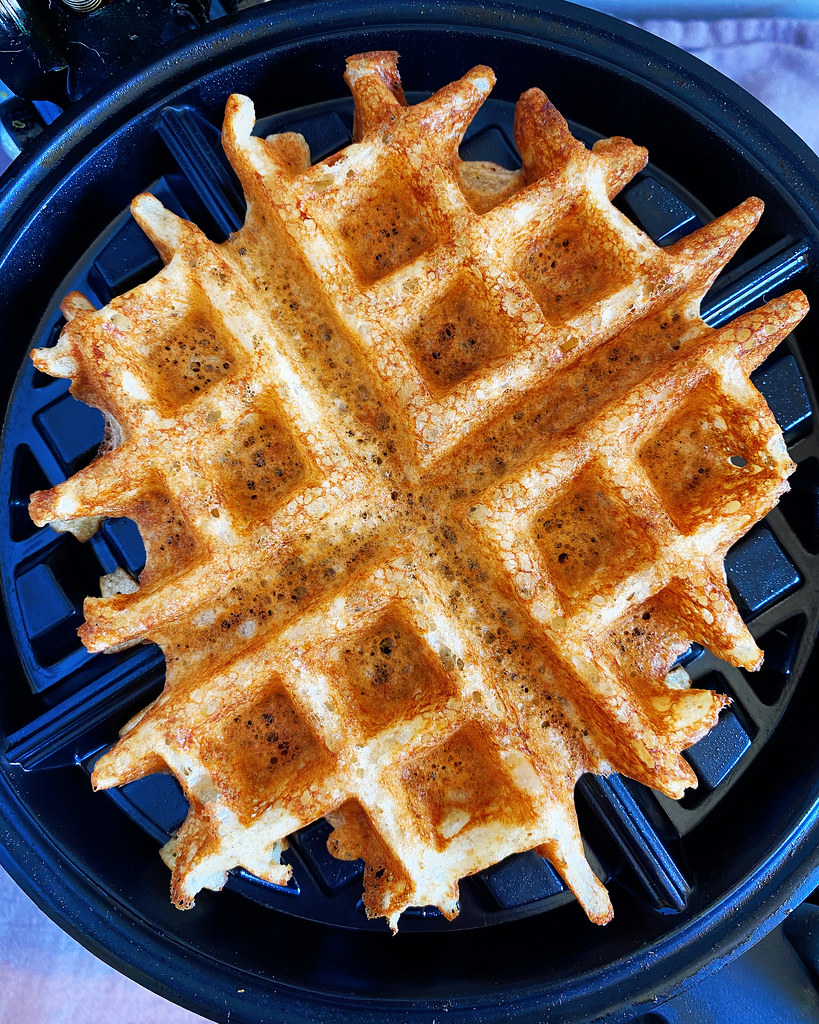 Sourdough Belgian Waffles
makes about 3-4 Belgian waffles, depending on the size of your waffle iron

The night before, mix together the sourdough starter, water, and flours.  Cover and let sit at room temperature overnight.

In the morning, add the melted butter, salt, honey, egg, and vanilla extract.  Start heating up your waffle iron.  When it is ready, stir the baking soda into the waffle batter and mix well.  Lightly grease the iron and add ~1/2 cup batter to the iron and cook until golden brown.  Serve immediately or freeze. 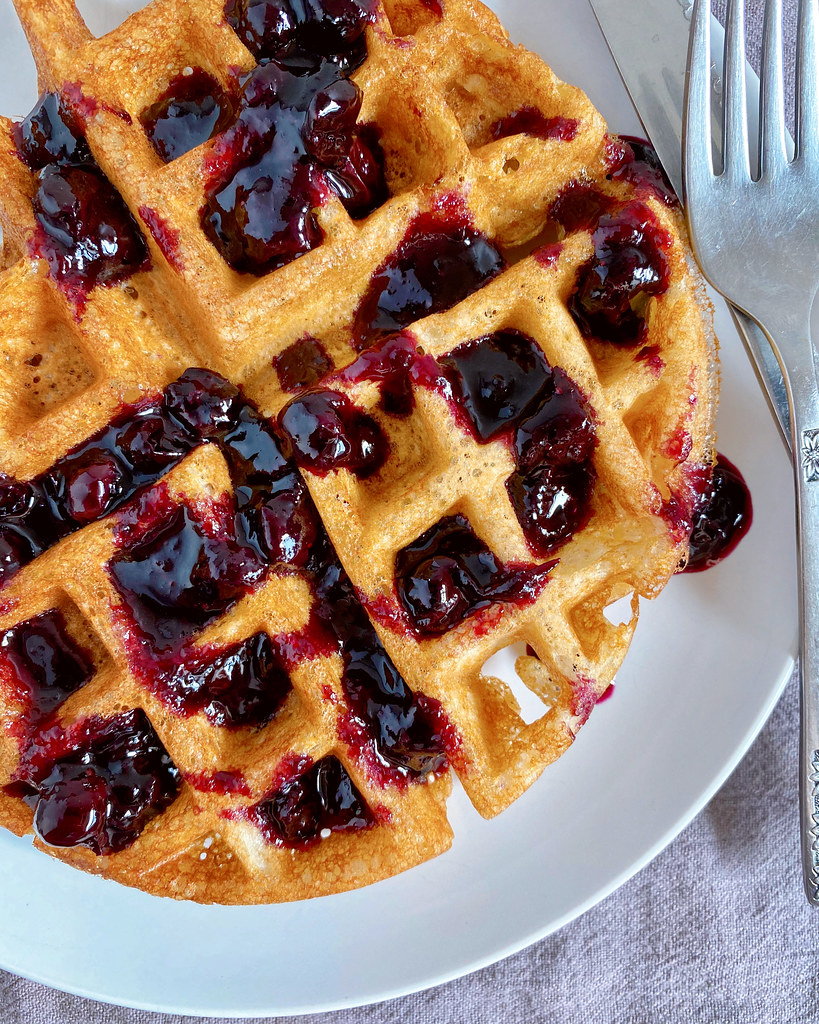 The Cooking of Joy: My Communion Bread bread

The Cooking of Joy: No Knead Sourdough Focaccia bread