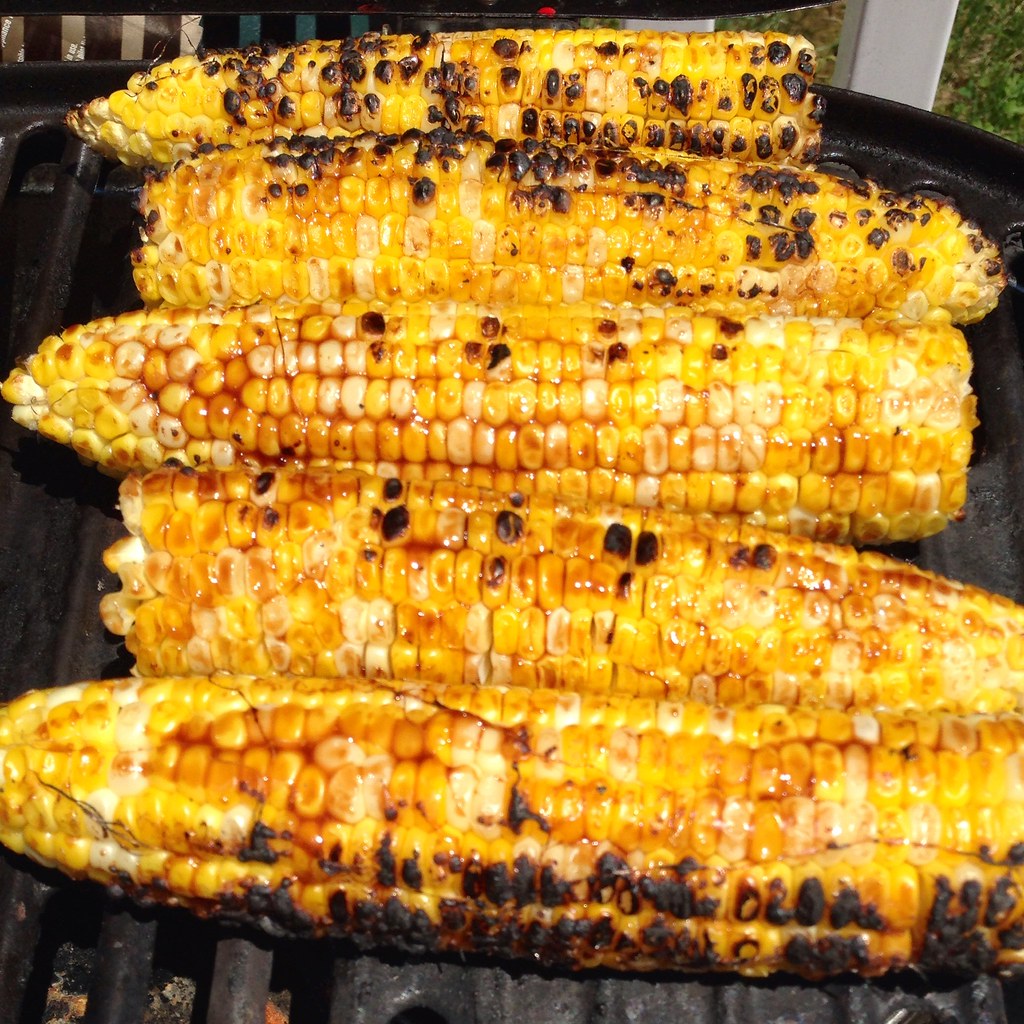 I have to admit that I’ve never actually had this when I was in Taiwan, but that doesn’t really matter.  When I read about Tiny Urban Kitchen’s Taiwanese grilled corn, I knew I had to make it.  I already had all the ingredients for the sauce, and corn was on sale for 12 for $1.97 at Stop and Shop!  All I was missing was a grill.  Luckily, my friends Evie and Santi had a cookout at their place over the weekend, so it all worked out.

After my experience with making Mexican grilled corn, I decided to par-cook the corn before grilling it.  I’ve wanted to try the microwave shucking method ever since I saw this video, so I figured I could use the microwave to kill two birds with one stone.

I like to make the basting sauce the night before so that the garlic has time to really release a lot of its juices.  Make sure you use soy paste and sweet chili sauce, not soy sauce or another hot sauce.  (See this picture from Tiny Urban Kitchen for the brands we both used.)  You really want the thickness and sweetness from using those two specific sauces for this recipe. 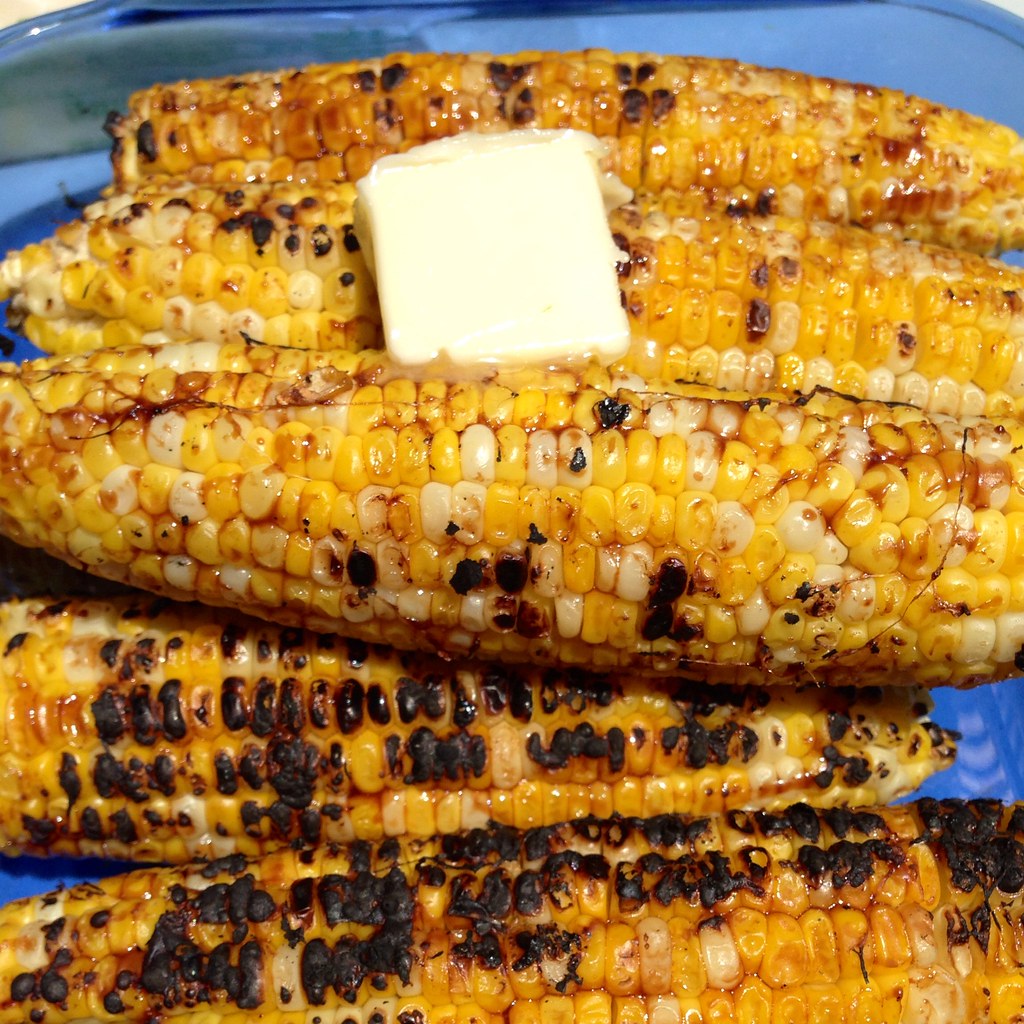 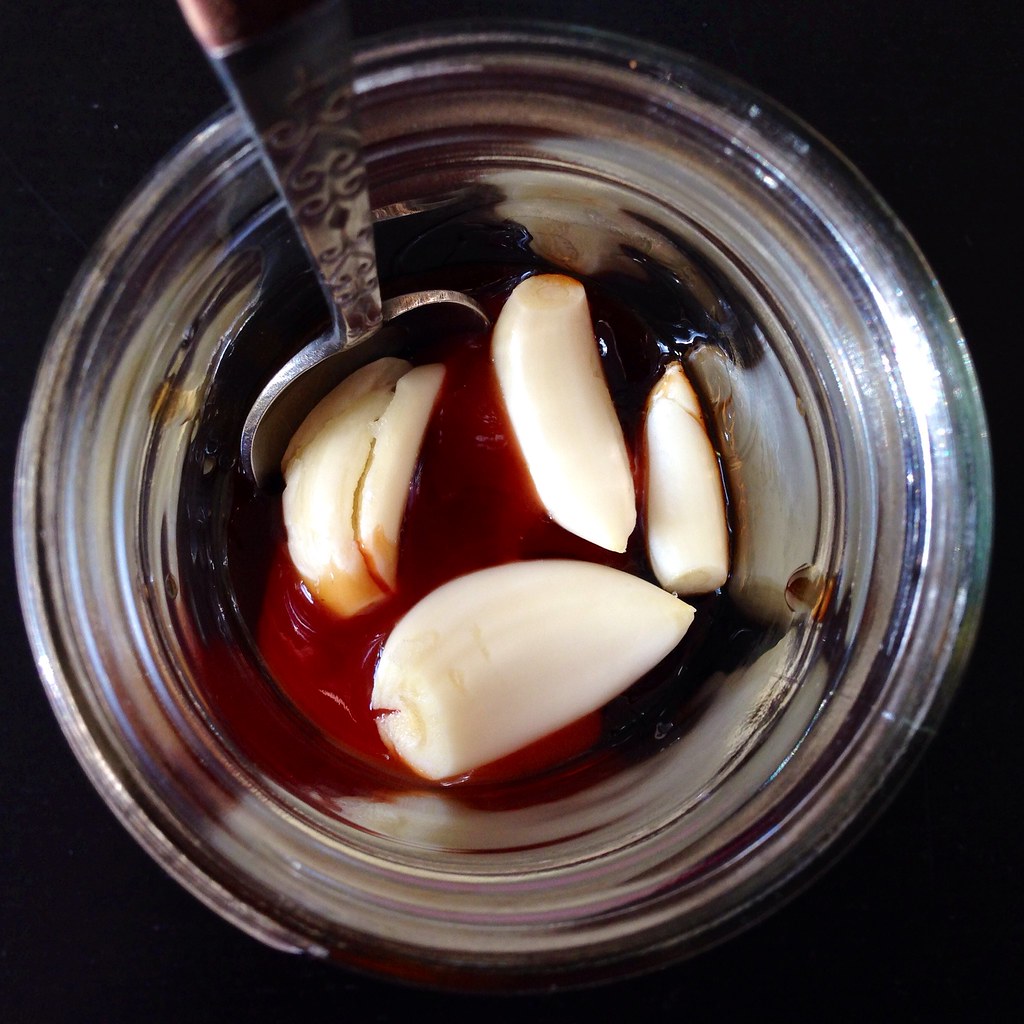 Mix together the soy paste and sweet chili sauce.  Smash the garlic
cloves, remove the skin, and add to the sauces.  I like to mash them a
bit more in the sauce to really release their juices.  Let sit in the refrigerator overnight, if possible. 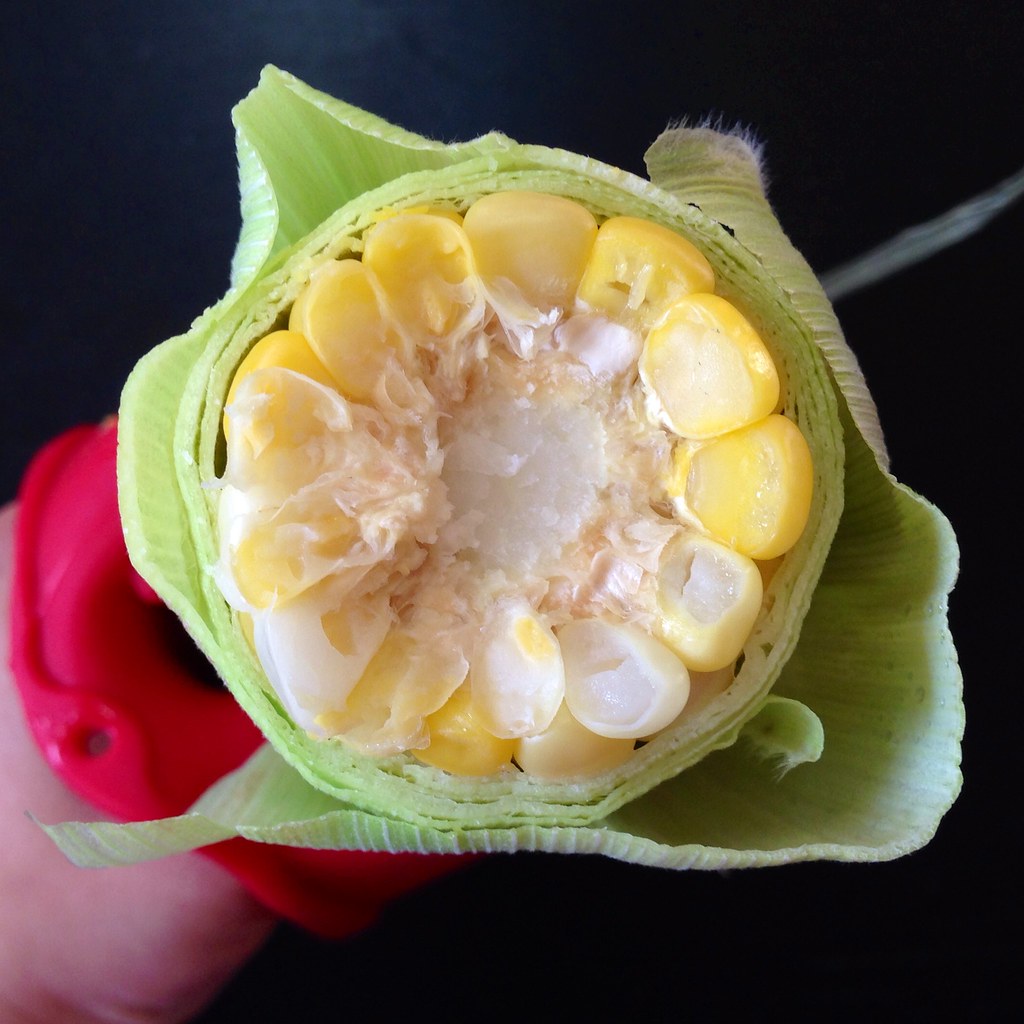 Cut off the stalk end of each ear of corn.  Microwave one or two at a time for 90 seconds to 2 minutes per corn.  The corn will be really, really hot so make sure you use a dependable oven mitt to remove from the microwave.

Holding the stringy end of the corn (and still using oven mitts!) shake and squeeze the corn out of the husk.  It should slide out pretty easily, and you should be able to get it out without any corn silk attached, but if there is any left on the corn, just remove it once the corn has cooled a bit.  This can also be done the night before; just store the par-cooked corn in the refrigerator and bring back to room temperature before grilling the next day. 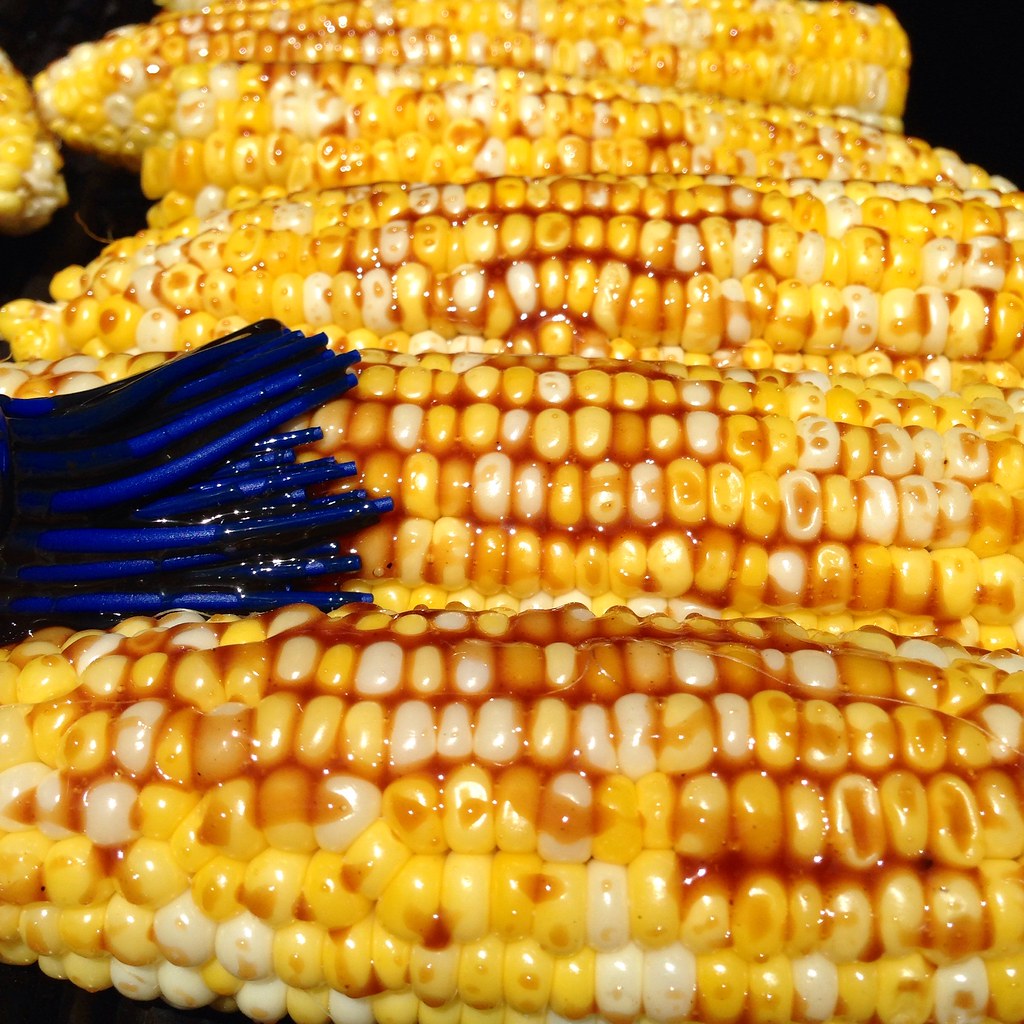 Grill the corn on a hot grill until it starts to char.  Start basting the corn with the sauce and turning them with tongs to get a nice glaze and char all around.  Continue basting until all the sauce is used up.  You can use less, but why would you want to?  Slather with butter before serving, if desired. 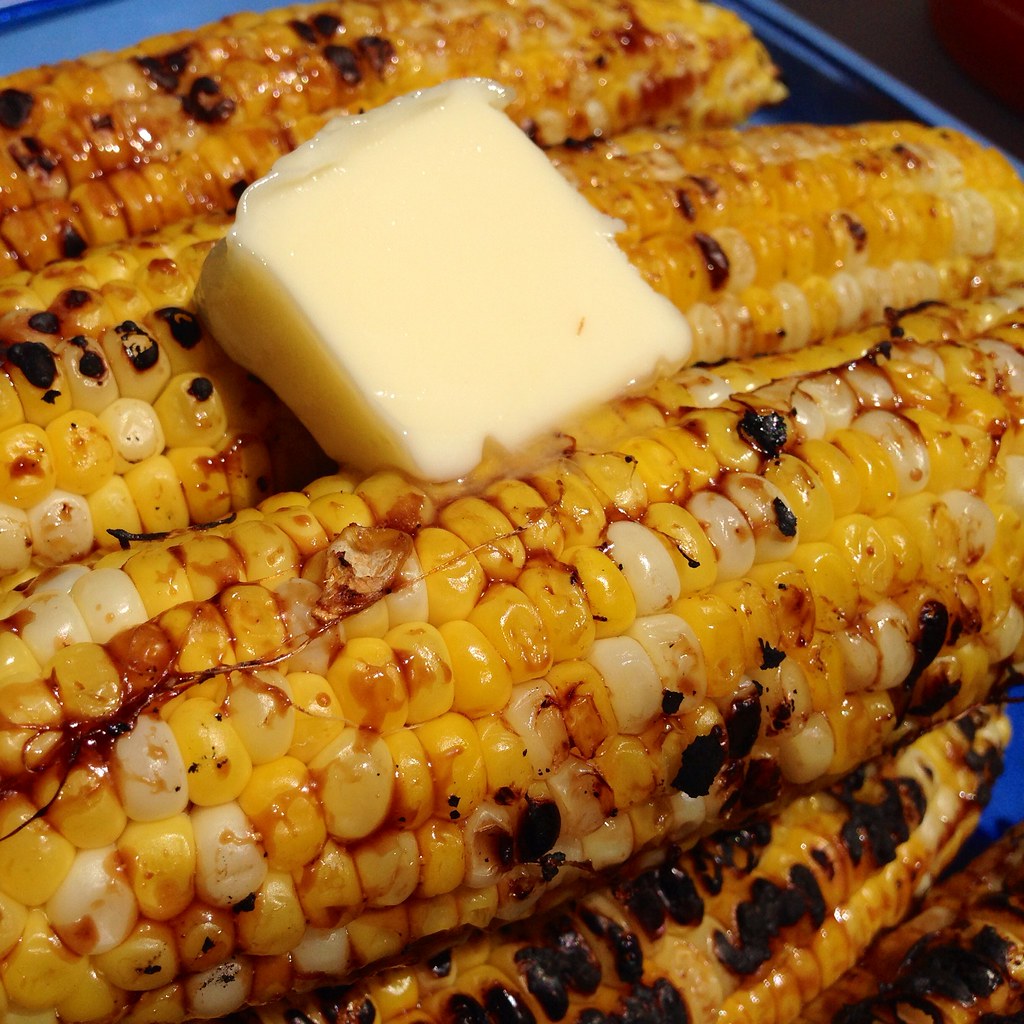 I actually started basting the corn as soon as they were on the grill instead of waiting for them to char first.  I’m not sure if it made a difference, especially since the corn was already par-cooked so it didn’t take too long for it to start charring.  The end result was exactly what I imagined:  sticky, salty, spicy, smoky, garlicky, crunchy, buttery sweetness.  I totally want to try using this sauce on all the things!