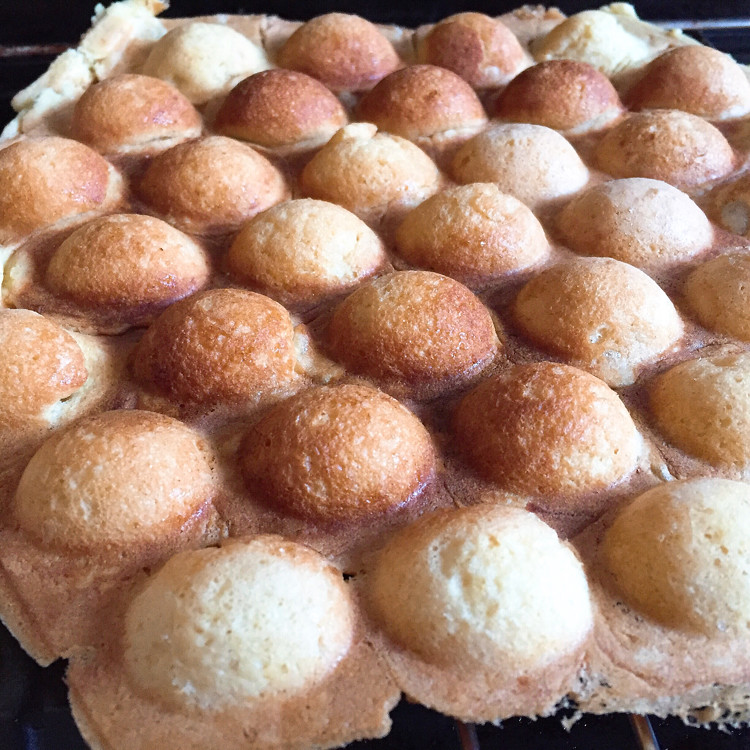 I was so excited when I received an electric bubble waffle maker from my brother and sister-in-law for my birthday last year.  I had visions of making the eggettes I used to get from NYC’s Chinatown and SF’s Genki and maybe even making a puffle cone a la Cauldron Ice Cream or Monkey King Tea (below).  But after trying the recipes I found on-line for eggettes and puffle cones (basically the same recipe) I’m still not satisfied with the results.  I even played around a little with the ingredients but nothing I made recreated the aroma, texture, or taste I was looking for. 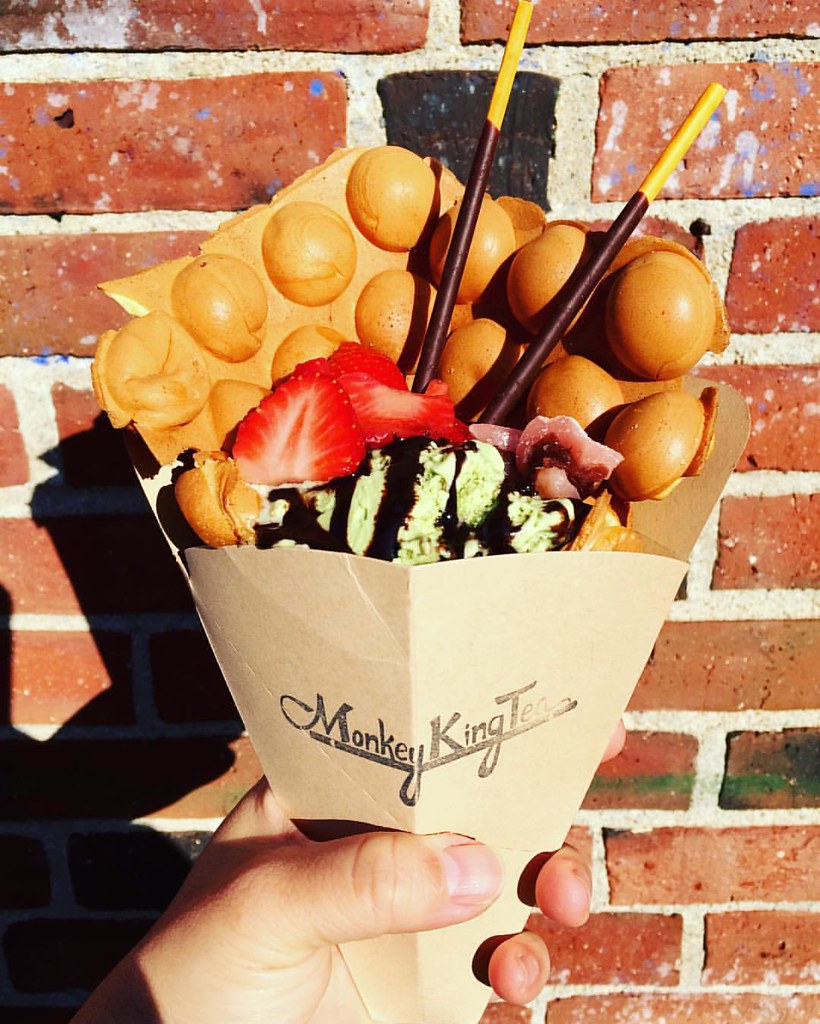 Not to be deterred, I decided to experiment with some other batter-based foods I had made before.  First up was pão de queijo (Brazilian cheese bread).  Since some of the eggette recipes used a little tapioca flour, I figured it would be fun to try an entirely tapioca flour based batter in the bubble waffle maker.  The results were incredible! 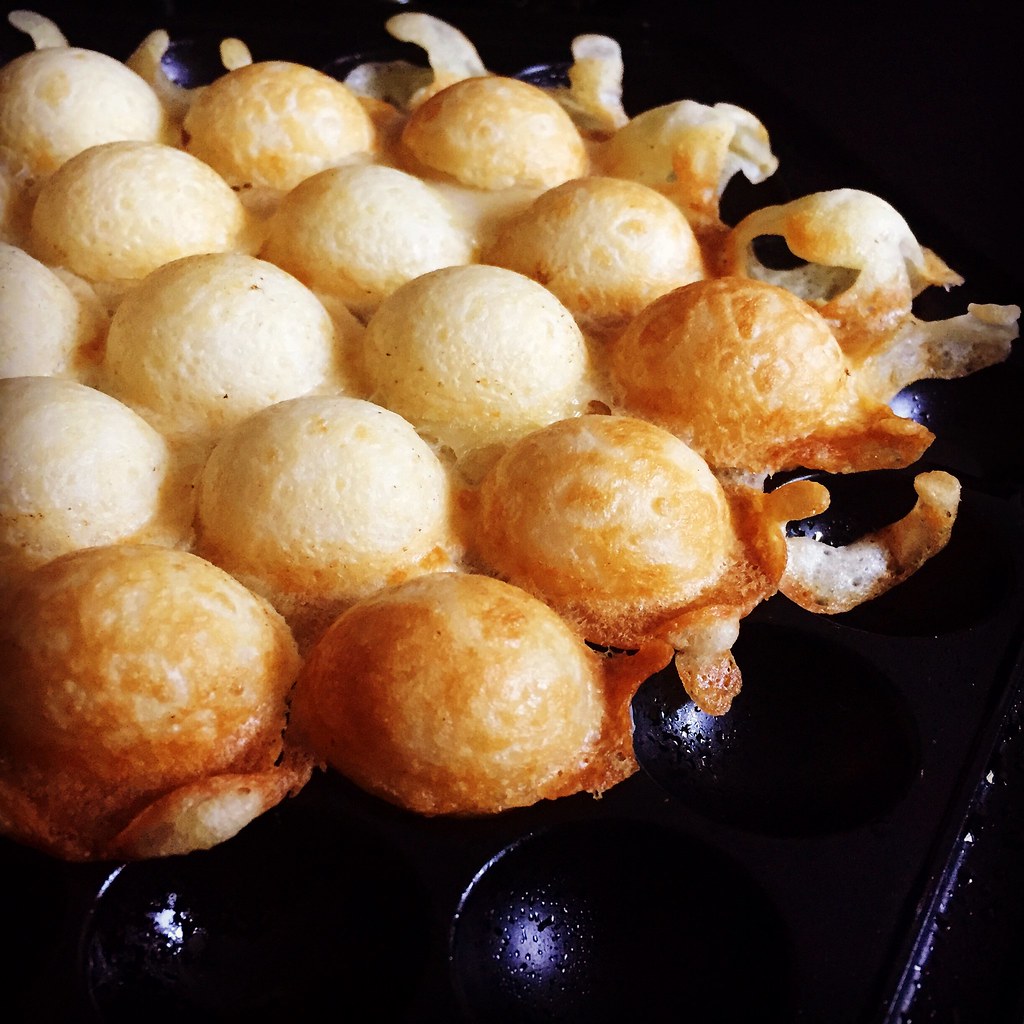 The bubble waffle maker was able to encapsulate the chewy, airy bread in a crispy crust in a fraction of the time it takes to bake the pão in the oven.  And it’s sooooo cute! 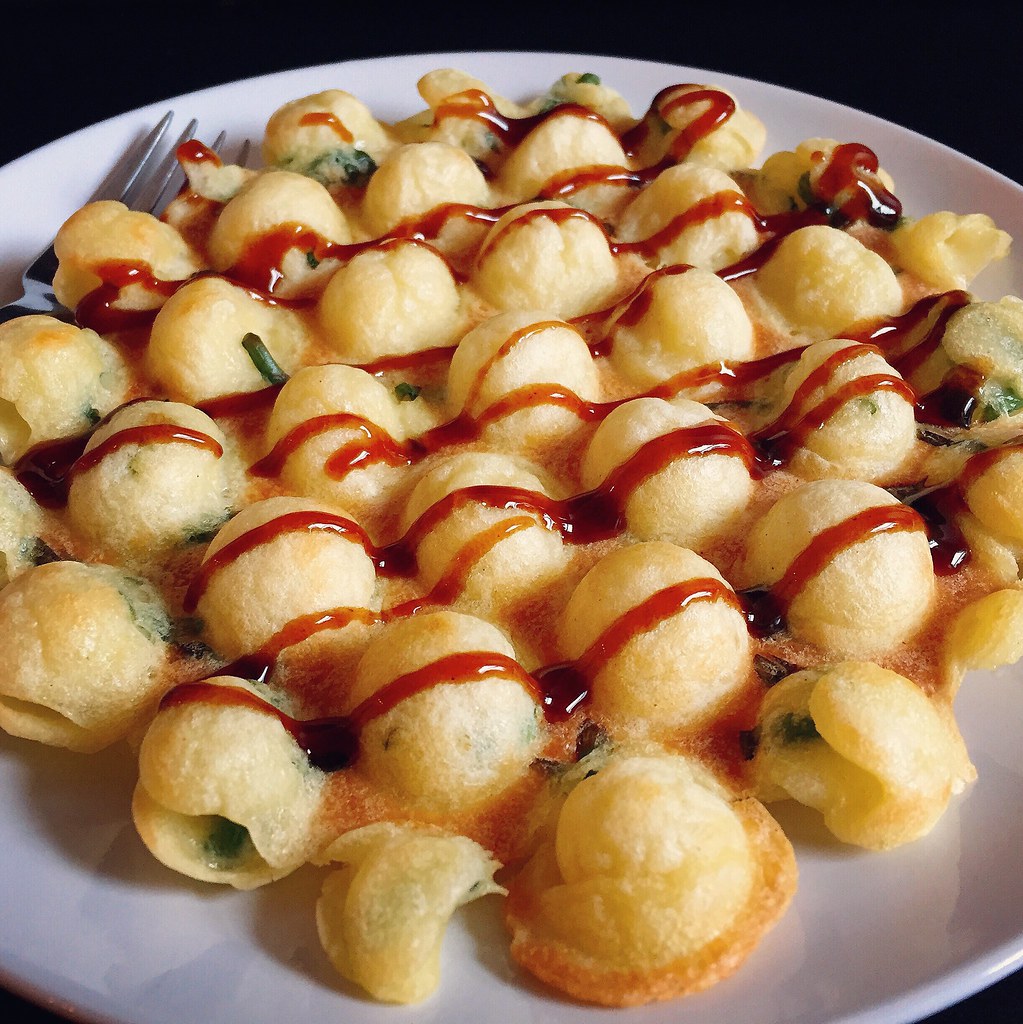 I also tried Korean pajeon (above) and Japanese okonomiyaki (below), and the results were decent, but not really worth writing about. 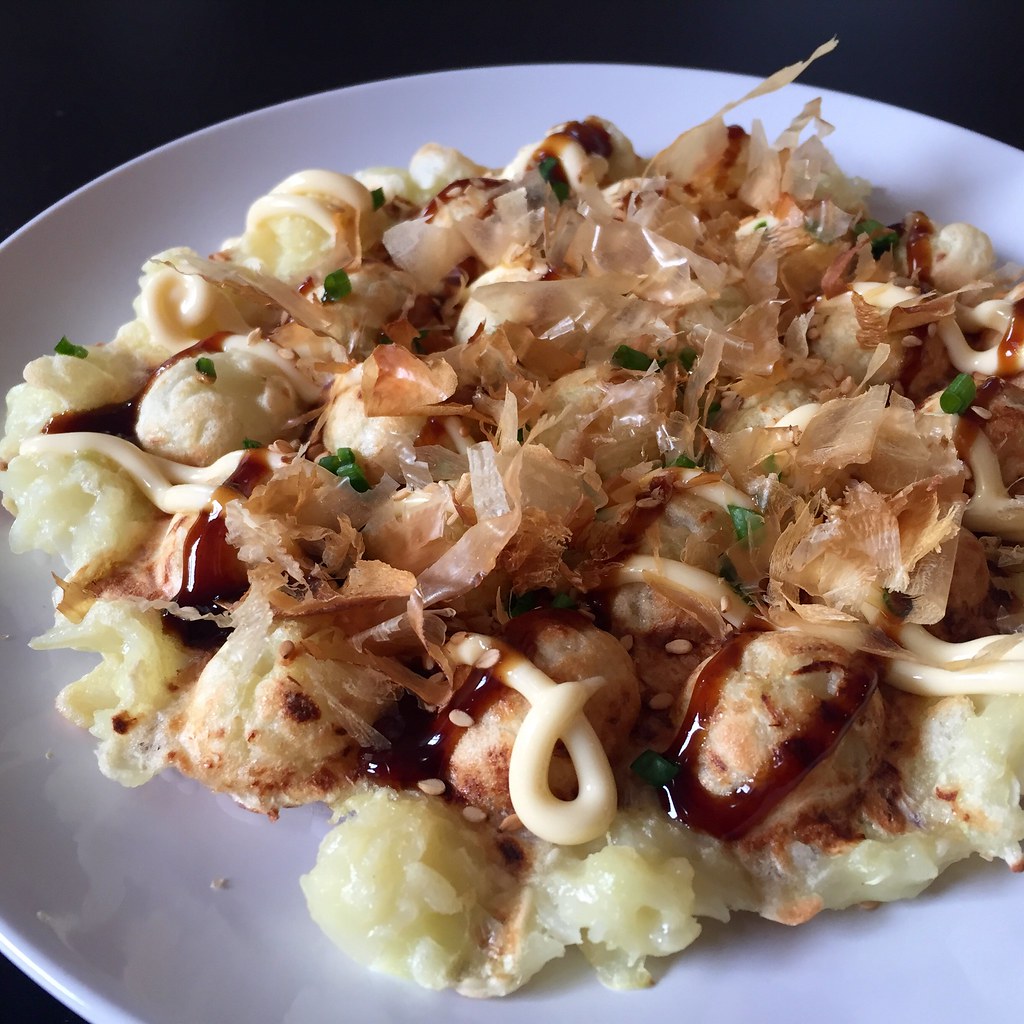 Probably my favorite use of the bubble waffle maker has to be the Taiwanese oyster omelette.
Since I remember the sweet potato starch batter to be super sticky, I
added a half tablespoon of oil to the batter itself and made sure to oil
the waffle iron well before adding the batter.  And even though I took
those precautions, I was still surprised when the omelette came out
rather easily from the iron. 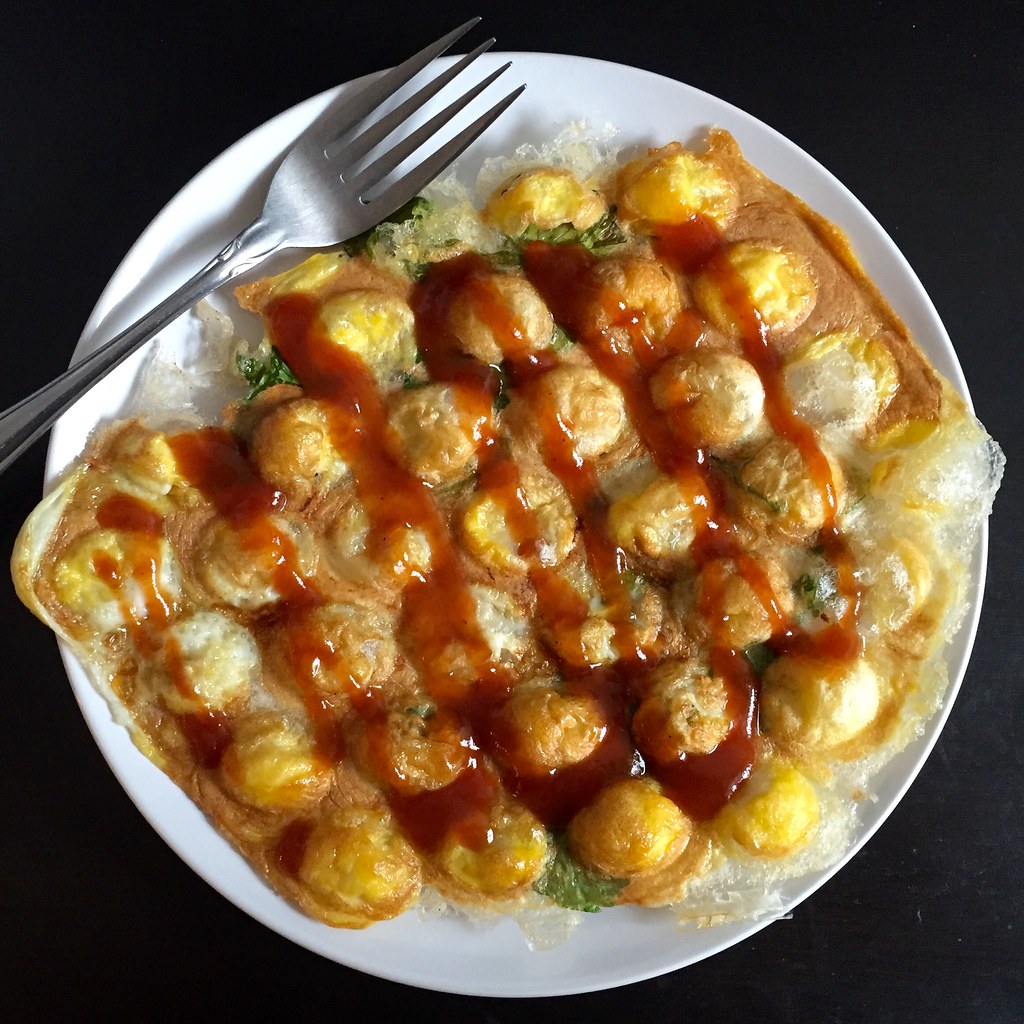 As with the pão de queijo,
I loved how the outside of the batter got super crispy but still stayed
moist inside.  And the shape of the bubble waffle maker gave it a lot
more nooks and crannies for an even higher crispy to chewy ratio! 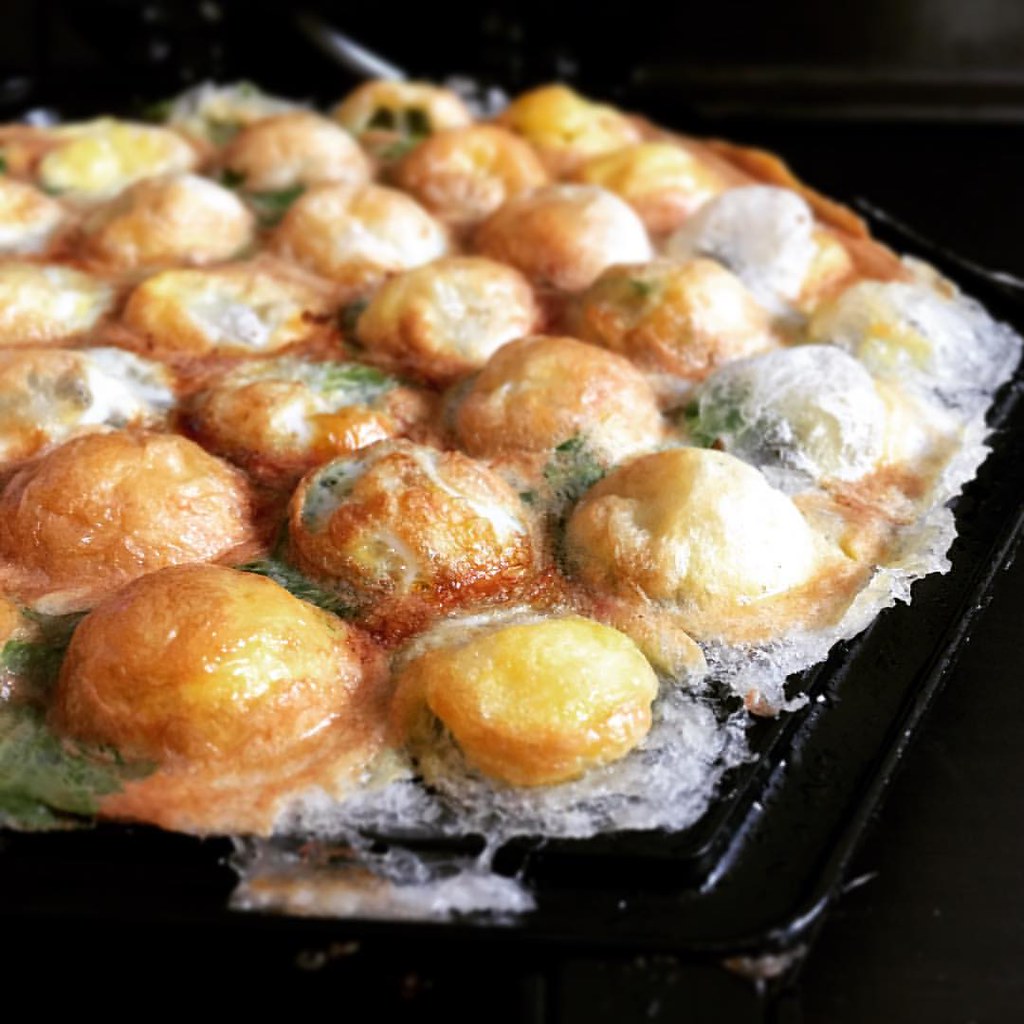 So does anyone else have a good eggette recipe or recommendation for what to try next in the bubble waffle maker?

The Cooking of Joy: The 4-Hour Baguette bread