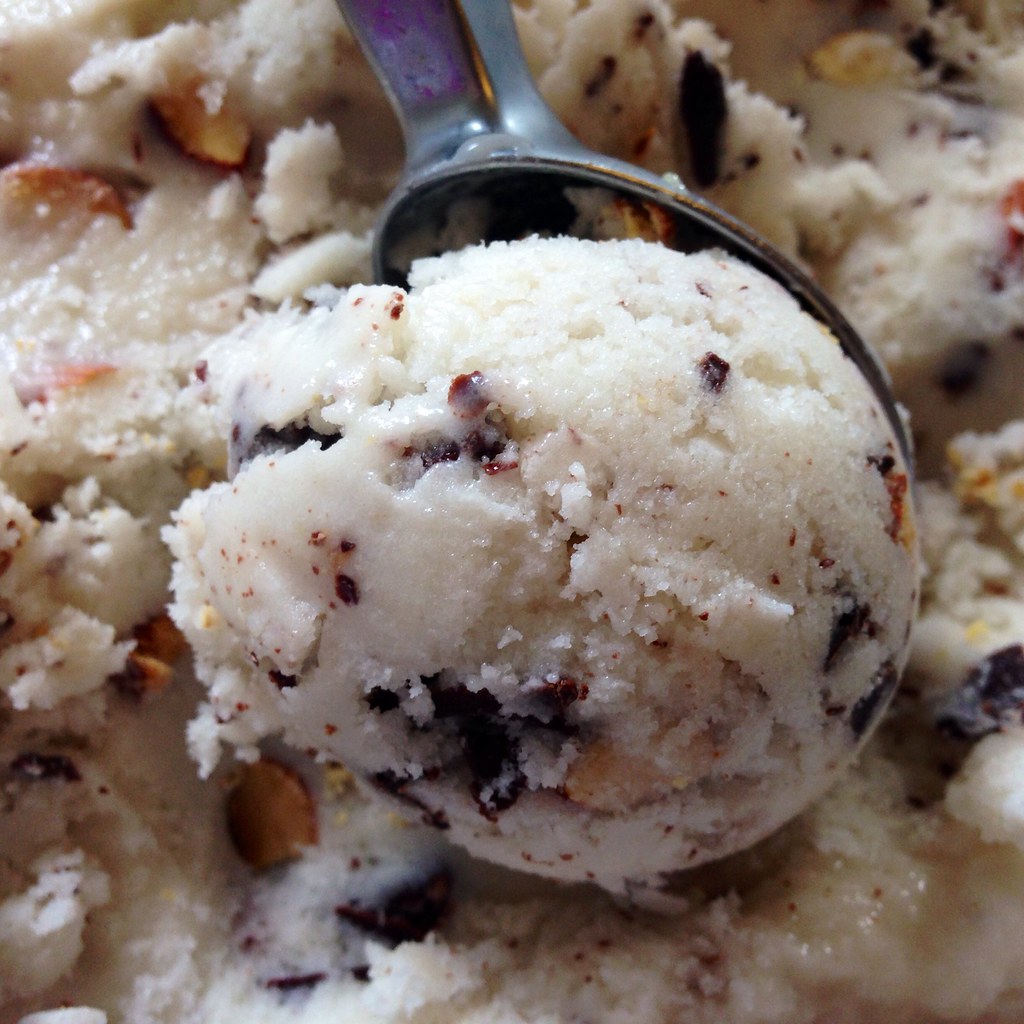 I’ve made coconut ice creams and coconut sorbets before, but when I saw this recipe on The Kitchn for a vegan coconut milk-based ice cream, I was pretty excited.  As someone who loves making ice cream but has a lot of lactose intolerant friends, it would be awesome to have a dairy-free homemade ice cream base to work with.

I also decided to try making bon bons out of some of the coconut ice cream I saved before mixing in the chocolate and almonds.  Topped with an almond and enrobed in homemade magic shell, it kind of looks like a fun-size Almond Joy!  I especially like how the texture of the ice cream almost looks like the coconut filling in an actual Almond Joy. 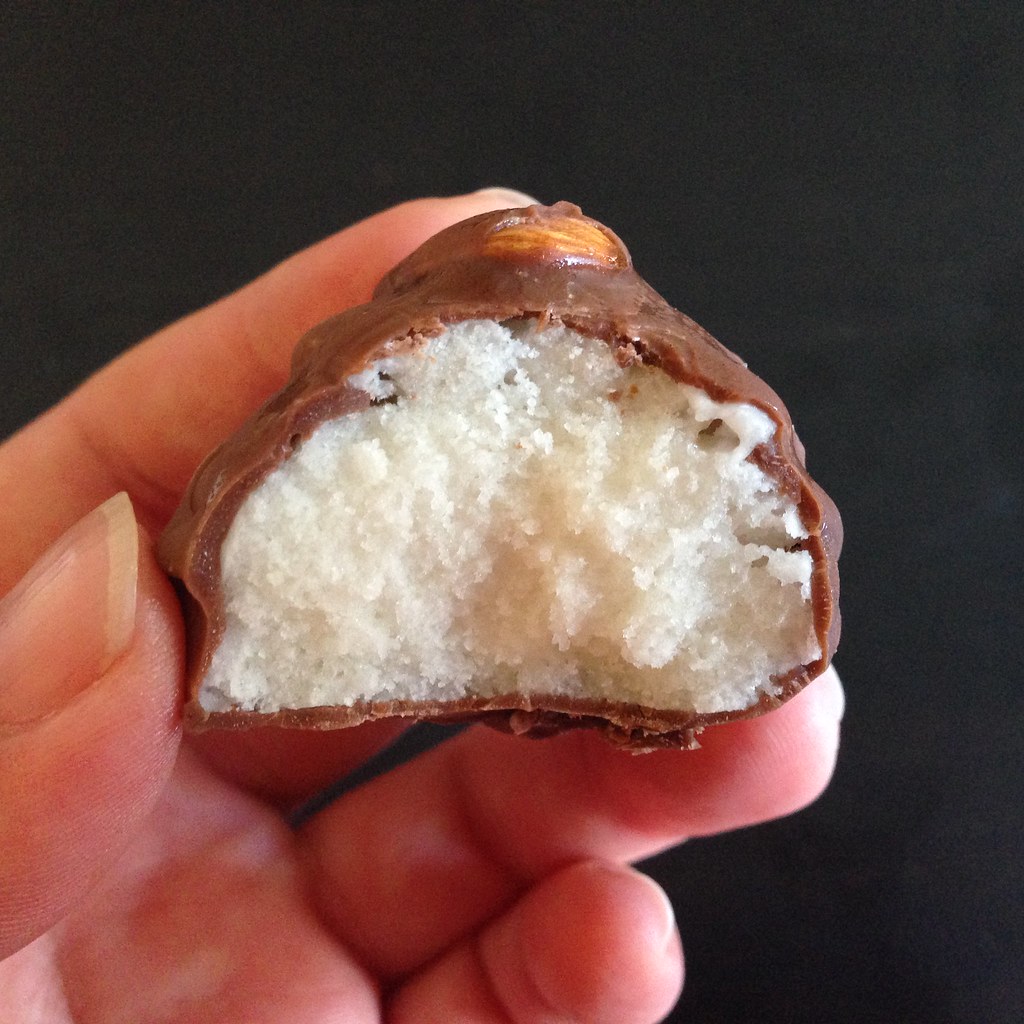 Shake the cans of coconut milk thoroughly before opening.  Pour the coconut milk into a medium saucepan, leaving about 1/2 cup in one of the cans.  Add the agave or honey and salt to the saucepan. Bring to a simmer over medium-low heat until the sweetener thins and is easily mixed into the coconut milk, about 2 minutes.

Whisk the cornstarch in the remaining 1/2 cup of coconut milk until well combined. Stir into the warm coconut milk base and cook over medium heat until the mixture begins to thicken — enough so that it coats the back of a spoon, 6 to 8 minutes. Do not to allow the mixture to boil.

Remove from the heat and pour the coconut base into a separate bowl. Allow to cool on the counter for 30 minutes, then stir in the coconut and almond extract.  Cover with plastic wrap and chill in the refrigerator for 4 to 5 hours; you need the base to be very cold before you process it in the ice cream machine. 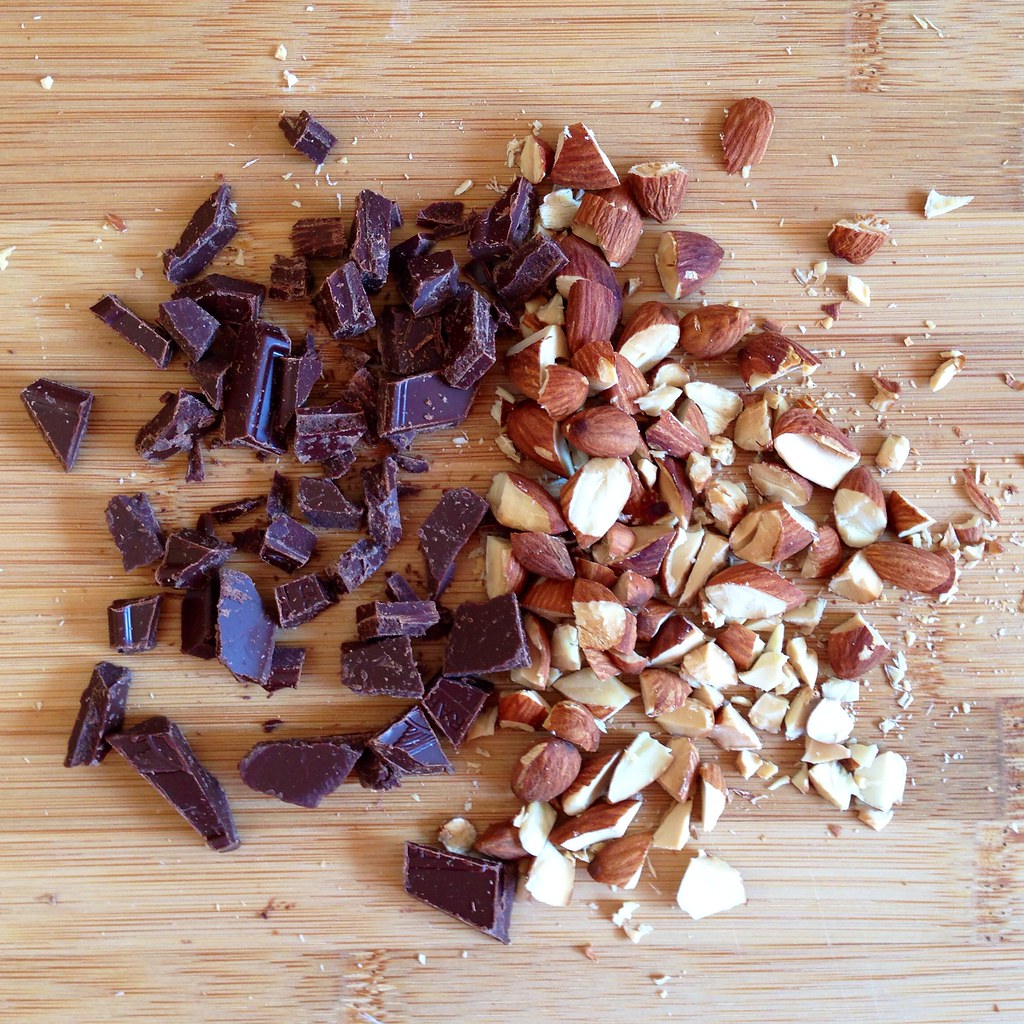 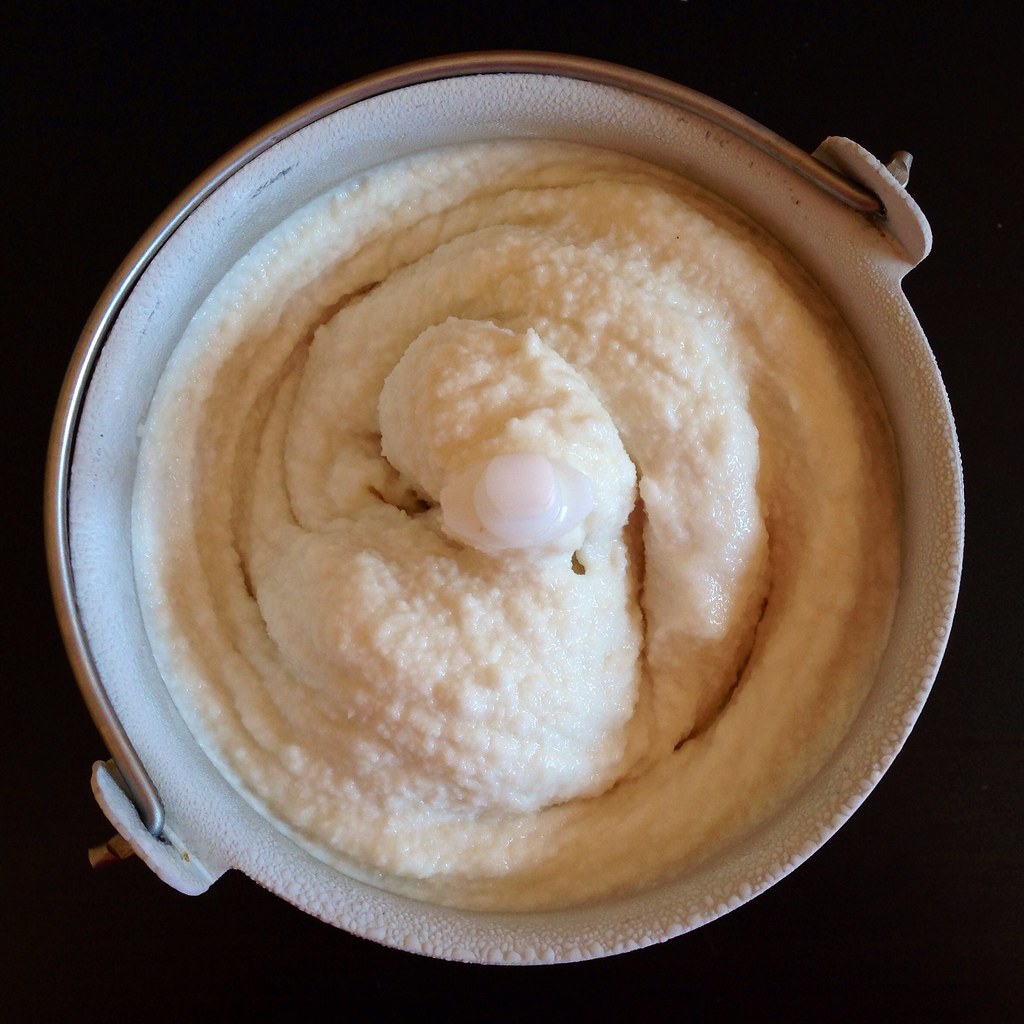 Churn the mixture in your ice cream machine following the manufacturer’s instructions.  (If you want to make the bon bons, skip the next step.)  Add the chopped almonds and chocolate chunks at the very end. When thickened to an soft-serve ice cream consistency, pack the ice cream into a storage container.  Seal with an airtight lid
and freeze until firm, at least 4 hours. 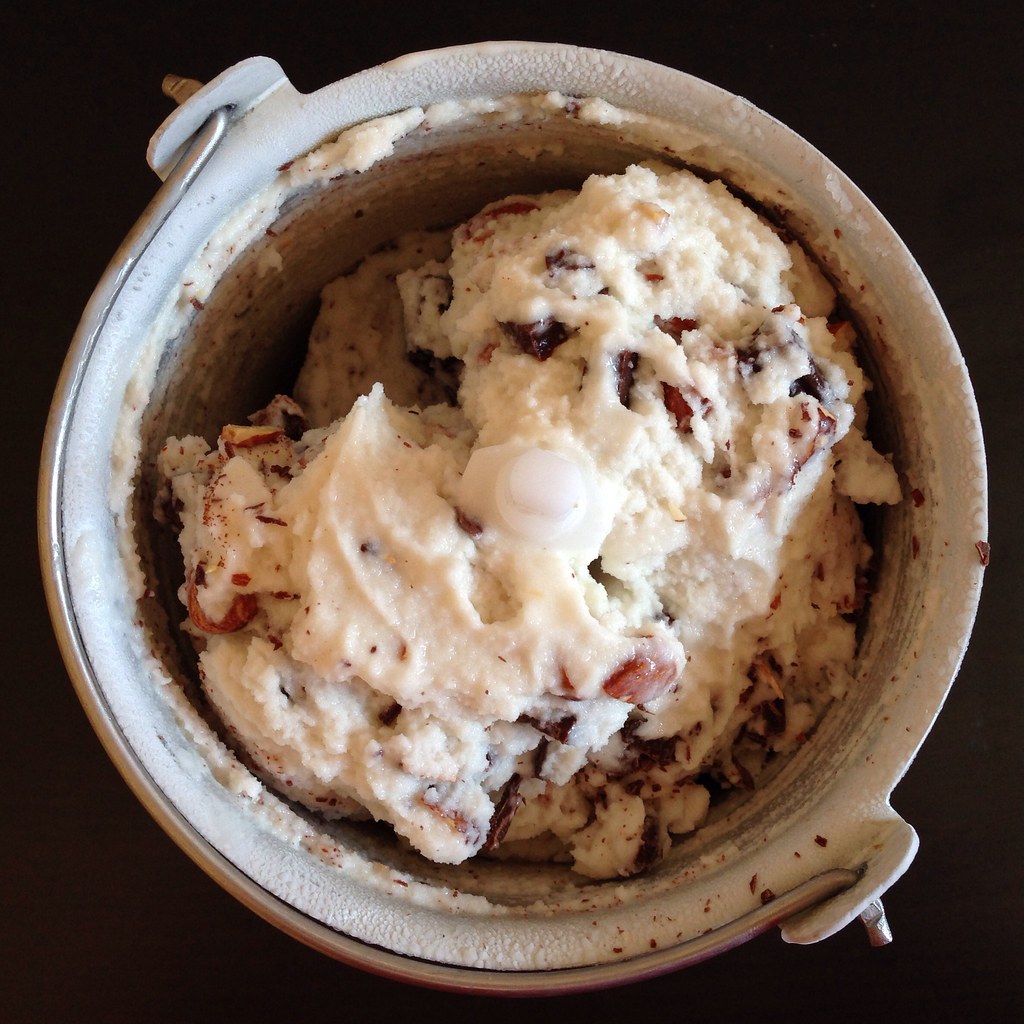 Line a tray with parchment paper and chill in the freezer. 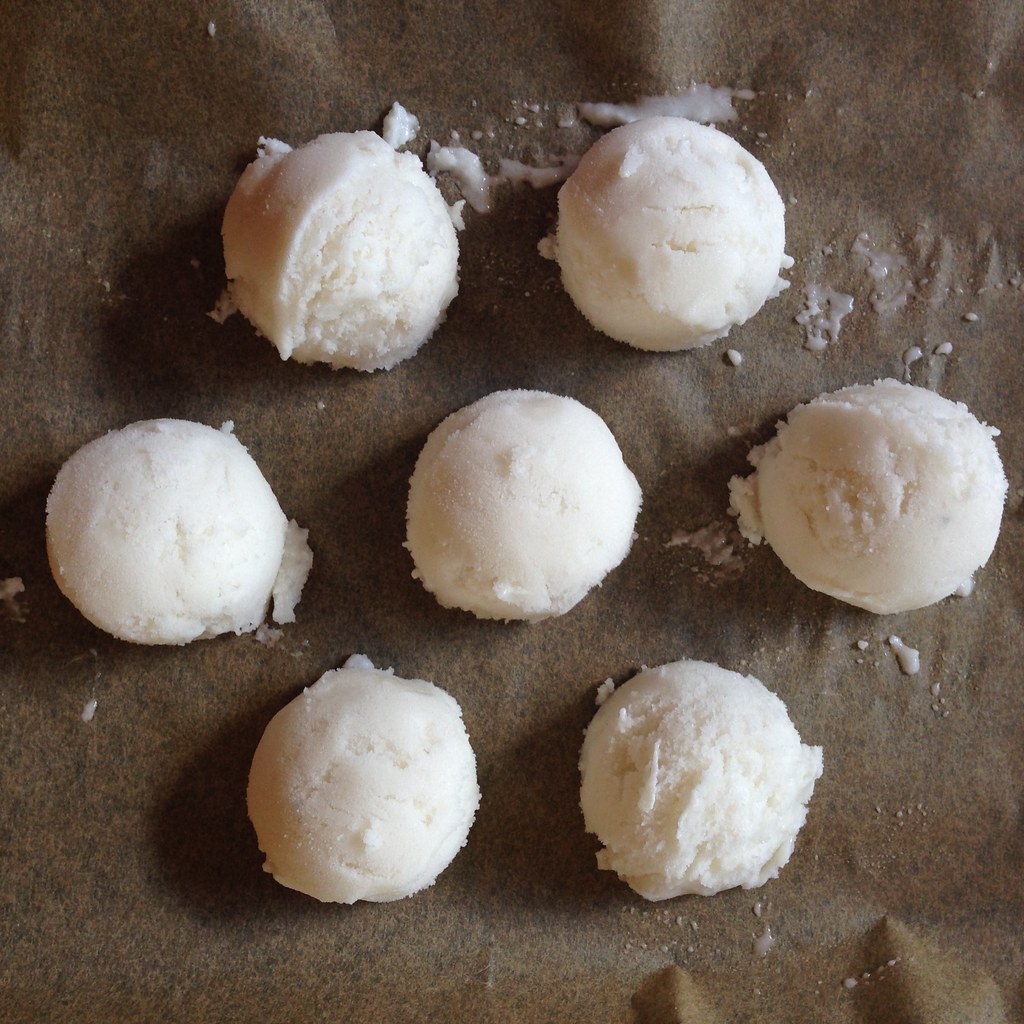 After the ice cream has hardened, scoop out small balls of the ice cream onto the parchment-lined tray, making sure to pack in the ice cream tightly so there won’t be any holes in the bon bons. 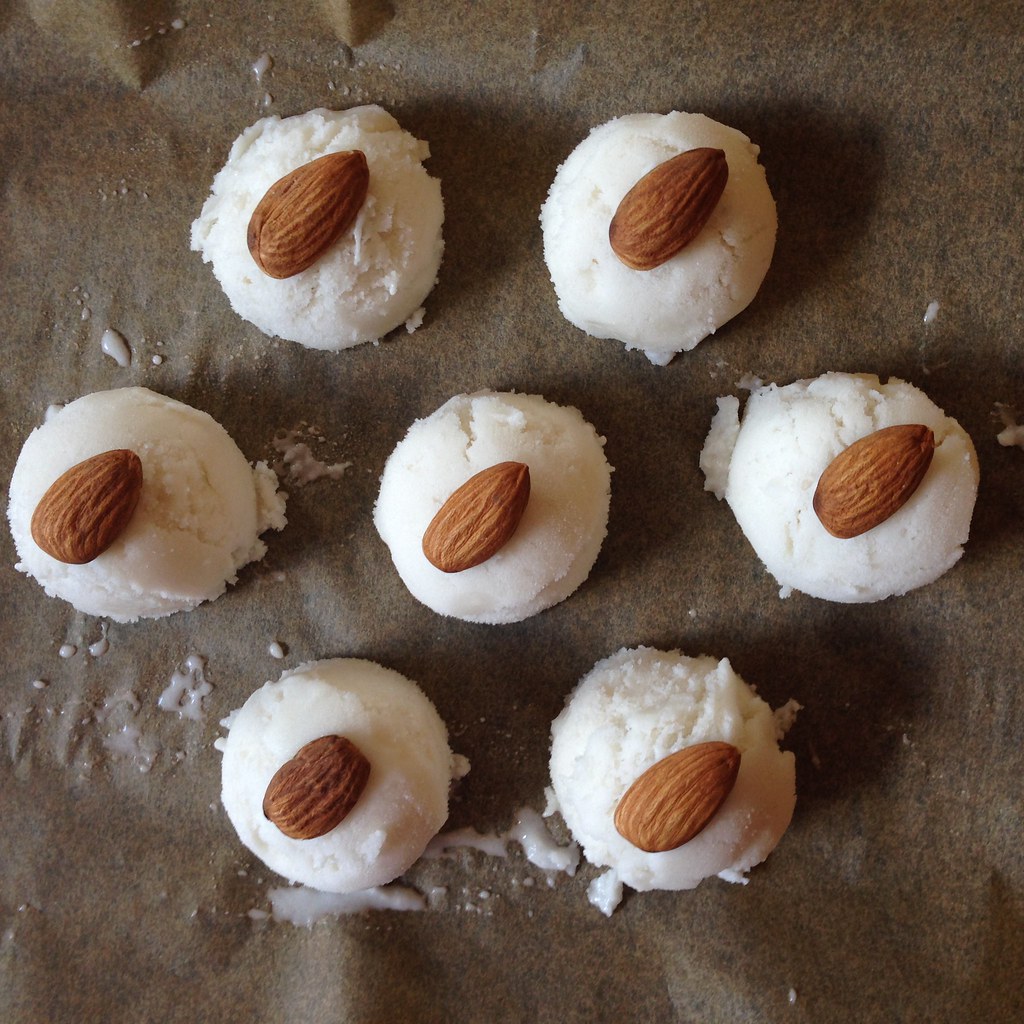 Place an almond on top of each scoop.  Inset a toothpick at an angle right next to the almond.  Return the tray to the freezer and allow the ice cream balls to harden for at least 30 minutes. 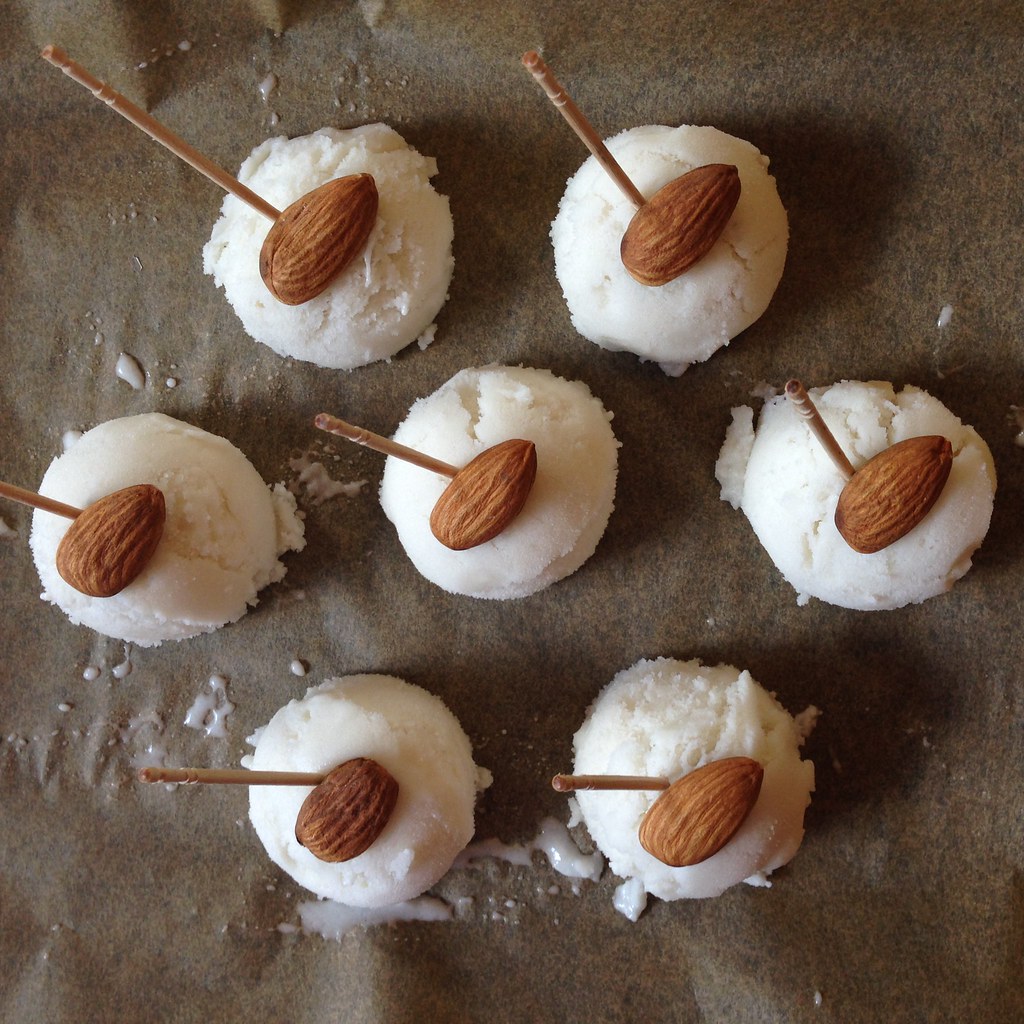 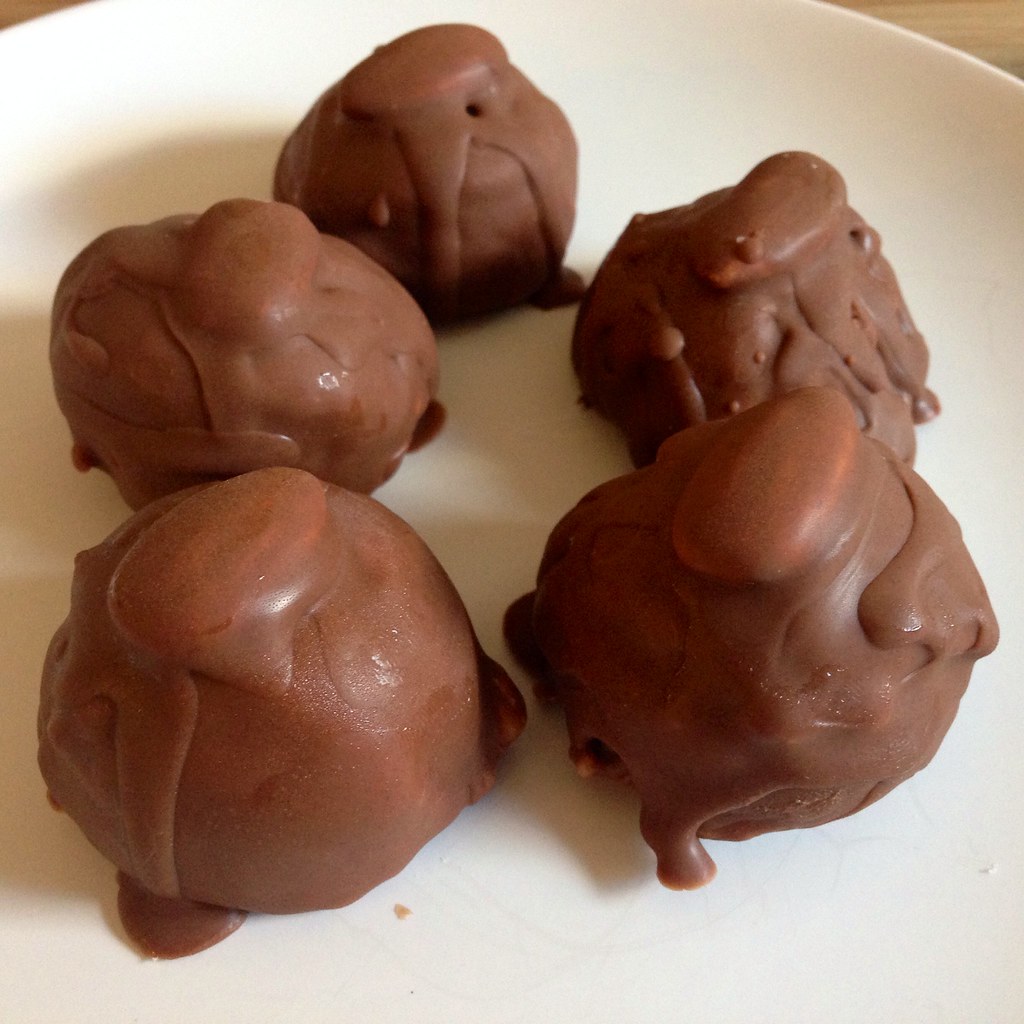 I wish I had let the ice cream balls harden longer in the freezer before I tried to dip them because of the 7 I scooped out, only these 5 made it intact.  And looking back, I think it would have looked nicer if I had taken the time to re-dip the bon bons again to smooth out the inconsistencies and produce a thicker coat of chocolate.  C’est la vie, they were still freaking delicious.  =)

Next:  Sesame-Crusted Tofu
Previously:  Overnight Oats in a Jar
Last Year:  Spaghetti Carbonara for One
Five Years Ago:  Kale Chips

Overnight Oats in a Jar almond